Locations are enticing audiences by expanding their programming beyond movies 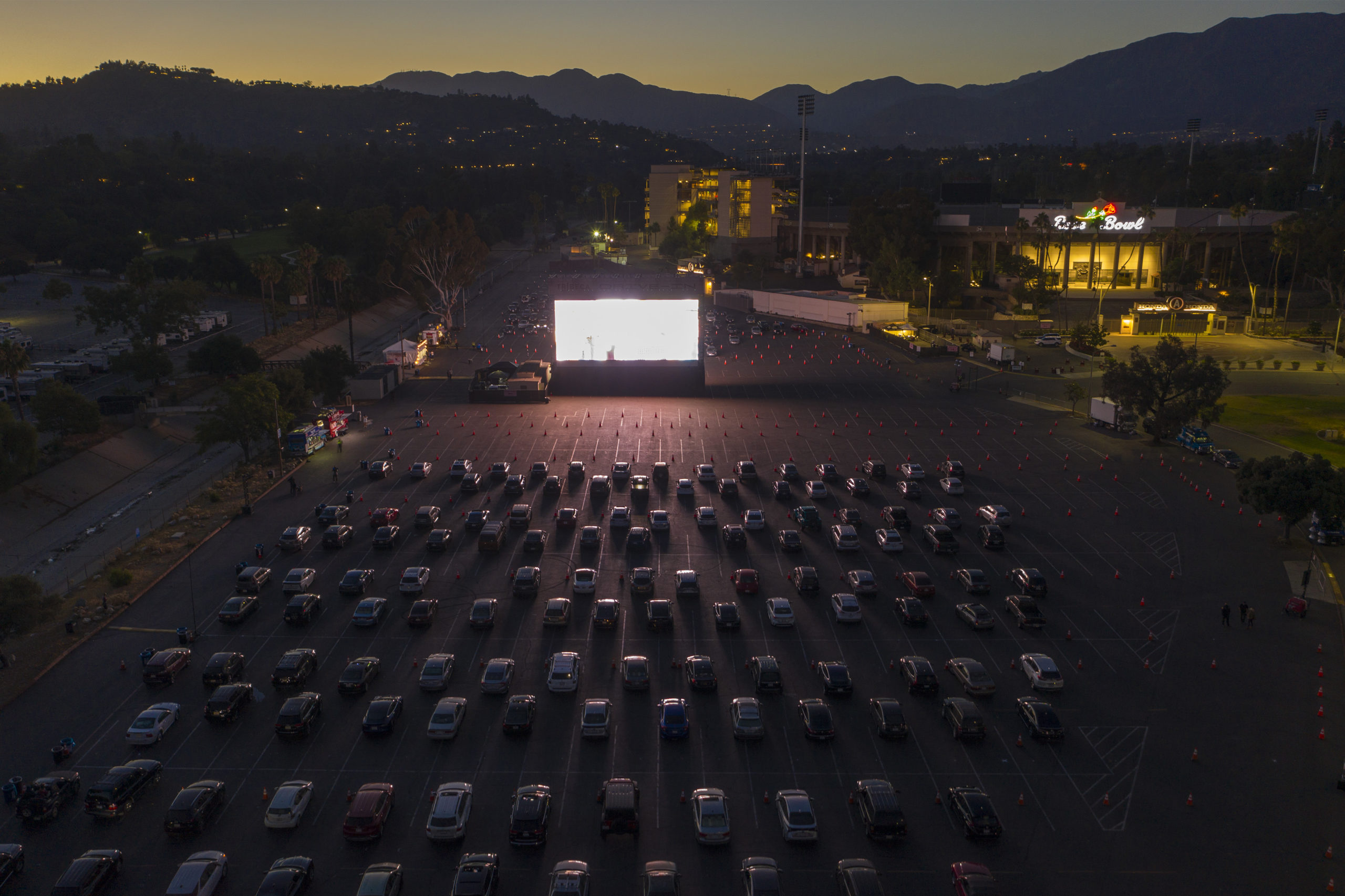 An aerial drone view shows a temporary drive-in movie theater at the Rose Bowl stadium, known for its spectacular Fourth of July fireworks which were canceled this year to reduce large public gatherings due to COVID-19 concerns, on July 4, 2020 in Pasadena, California. Over half (55%) of the public, including 66% of Gen Z adults, said they would be interested in going to a drive-in. (David McNew/Getty Images)
By Sarah Shevenock

With tickets, popcorn and drinks in hand, moviegoers are ready to head to … the driver’s seat?

Drive-in movie theaters, once a nostalgic throwback, are providing a respite for those eager to see flicks on the big screen but concerned about the risk of coronavirus within traditional, walled-in theaters. And with most major theater chains still closed, some of the 321 drive-in movie sites that operate across the United States are seeing a rise in business.

Tom Major, co-owner of the Georgia-based Tiger Drive-In, said business has increased roughly 20 to 25 percent year over year over the past few years, and he expects that trend to continue in 2020 — even after reducing the capacity of the venue from 220 cars to roughly 80 in order to accommodate social distancing measures. 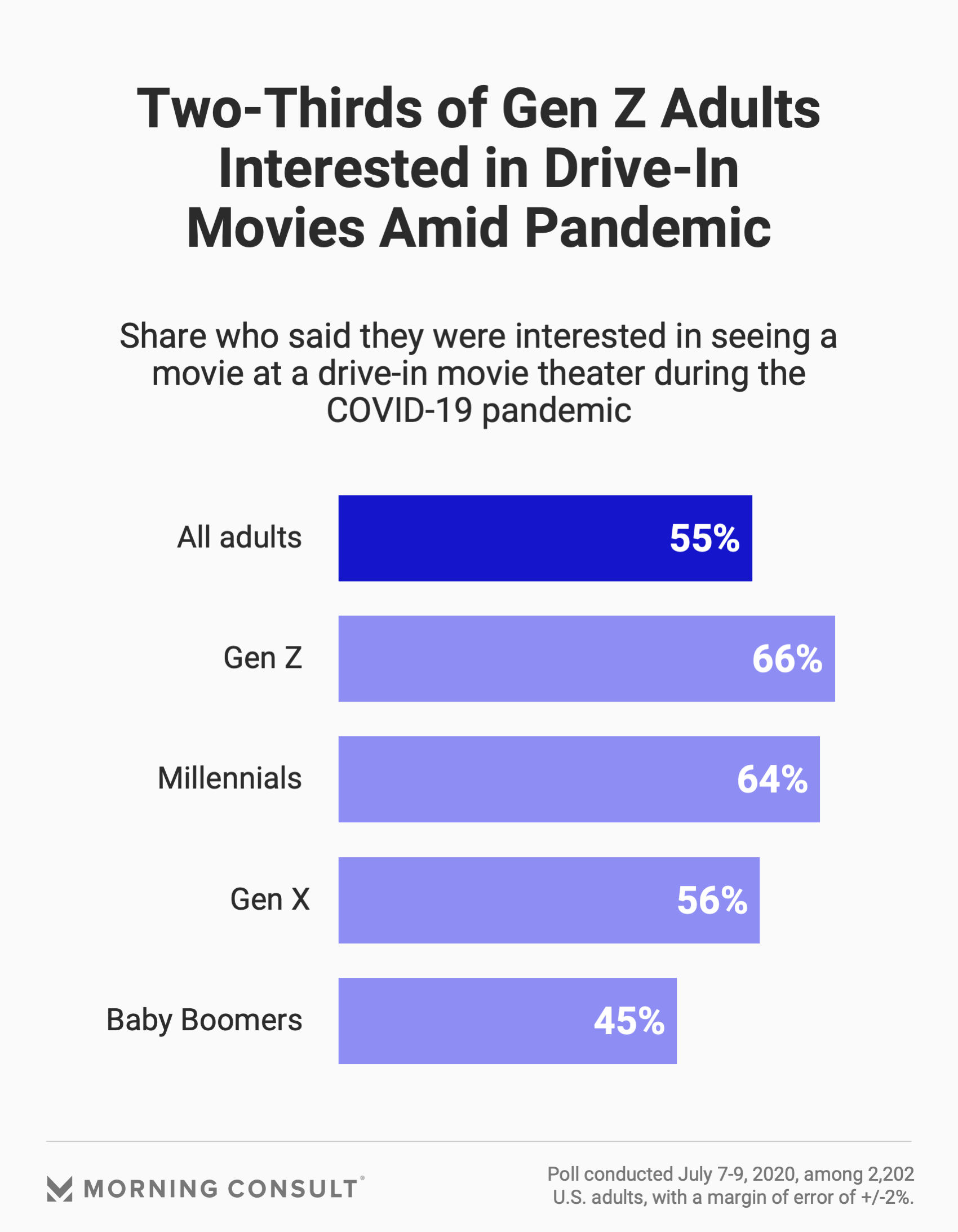 New Morning Consult polling shows there is some enthusiasm for patronizing drive-in theaters: 55 percent said they’d be interested in visiting one of the outdoor theaters, including 66 percent of Gen Z adults. Adding to the potential draw of the drive-in is that audiences are 12 percentage points more likely to be comfortable with watching a film outdoors than inside, according to separate Morning Consult polling.

Mark and Jennifer Frank, owners of the Raleigh Road Outdoor Theatre, said they’ve also seen an increase in business — a rise of about 10 percent year over year for the first half of 2020, even after needing to close for the month of April due to the pandemic. Since reopening, they’ve seen a year-over-year increase of almost 50 percent for the months of May and June.

But just 6 percent of U.S. adults have gone to a drive-in since the pandemic started, and Chip Sawyer, whose Lakeland, Fla.-based Silver Moon Drive-In Theatre has seen business fall by the single digits year over year after a month-long closure, said one problem for drive-ins is a lack of new content.

“Big first-run summer movies, especially family-friendly movies, do really well at the drive-in,” he said. “This year, we are not getting those big blockbusters, which makes big nights hard to come by.” Major, Sawyer and the Franks said they have not raised prices for regular screenings at their establishments this summer.

While a number of 2020 releases, including “Trolls: World Tour” and “Palm Springs,” are available for drive-in theaters to screen, only 28 films premiered between June 1 and July 17, compared to the 99 that debuted throughout June and July of last year.

Related: Summer Blockbusters Were Slated for This Weekend. Most People Aren’t Ready to Go Back to the Movies

Sawyer and Major have remained open by implementing health and safety measures that have become commonplace for businesses in the COVID-19 era, such as increased cleaning of shared surfaces, contactless payment options and social distancing around the drive-in. They’ve also seen a change in the makeup of their audiences, with Sawyer noting an increase in the number of young moviegoers. Both owners said that a larger share of their audiences this year have been from the surrounding metropolitan areas.

“There’s nothing they can go to down there” in Atlanta, said Major. “People come from much longer distances to be in our theater.”

The July 7-9 survey of 2,202 U.S. adults has an overall margin of error of 2 percentage points, while the Gen Z subsample has a 6-point margin of error.

With fewer entertainment options available, both theaters have expanded their programming to include dance recitals and concerts, both virtually and in person.

Now larger organizations are getting into the game.

Tribeca Enterprises launched its Tribeca Drive-In initiative, which would set up drive-ins in New York, Florida, Texas and California throughout the month of July. And beginning in August, the organization will team up with Walmart Inc. to turn 160 of the retailer’s parking lots into drive-ins. Sixty percent of those surveyed said they would be interested in attending such an event.

With no end to the pandemic in sight and the reopening timeline for traditional cinemas still in flux, it’s unclear what the future holds for drive-in theaters. But owners are optimistic.

“I don’t think I’ll get dropped like a rock,” Major said. “I really think there will be some sustaining business.”

Clarification:  The chart’s text was updated to clarify that the data reflects whether consumers were interested in seeing a movie at a drive-in movie theater during the pandemic.