A vendor displays a Confederate flag and Trump 2020 "Make America Great Again!" flag outside the Bristol Motor Speedway prior to the NASCAR All-Star Race on July 15 in Bristol, Tenn. New Morning Consult/Politico polling shows just over 2 in 5 voters believe the Confederate flag is mostly a symbol of racism. (Patrick Smith/Getty Images)
By Cameron Easley

Democratic sentiment toward the Confederate flag has shifted more in the past month than it had in the five years prior, a change that new polling suggests is largely fueled by President Donald Trump’s lonely defense of the Southern relic.

In a new Morning Consult/Politico survey, 39 percent of voters said they mostly see the displaying of the Stars and Bars as a symbol of racism, up 3 percentage points since early June and a record high in Morning Consult polling. 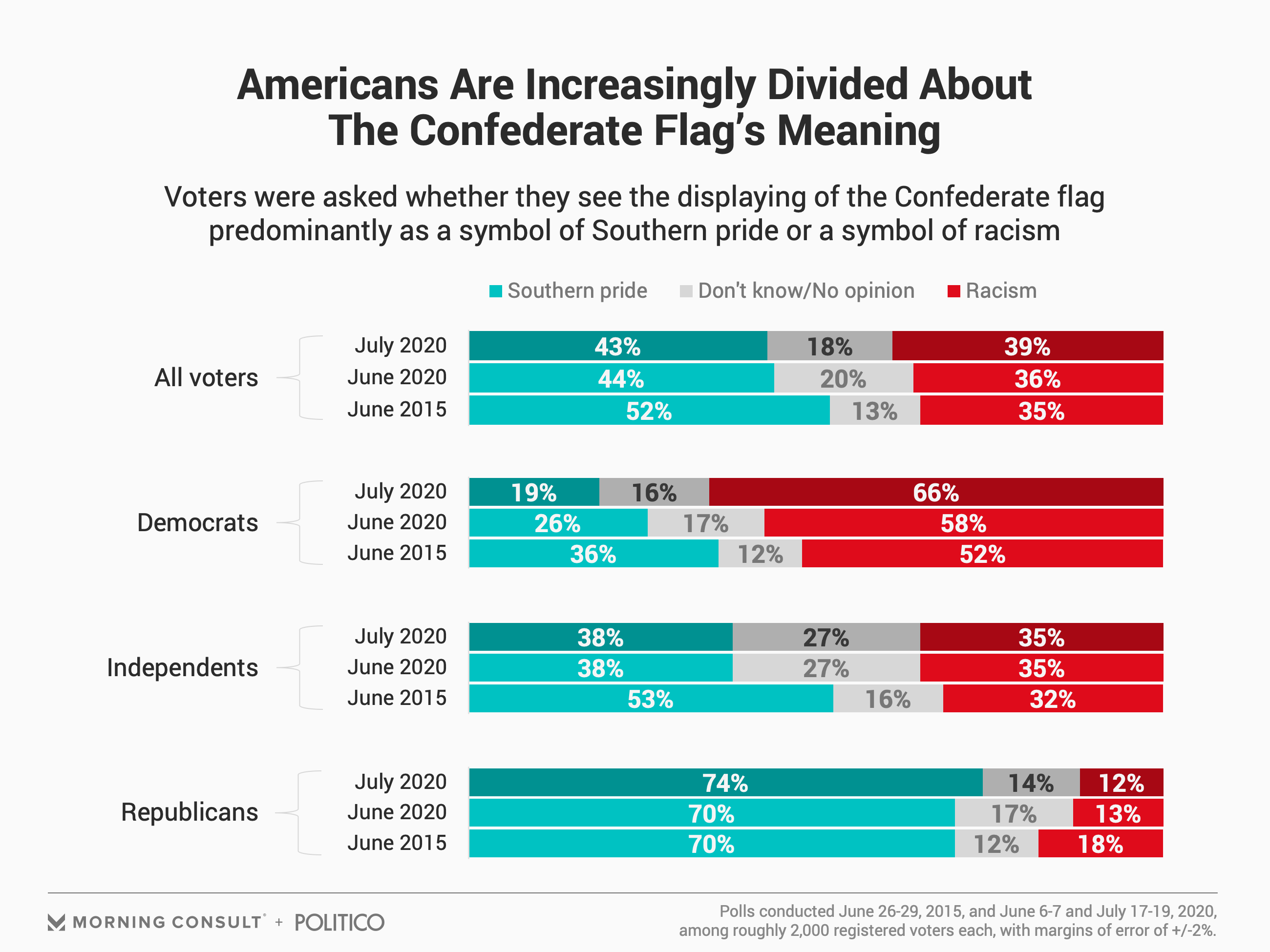 The change came as Trump criticized NASCAR for its decision to ban showing the flag in races and defended its display in recent interviews with Fox News and CBS News. The movement in public sentiment — which is another example of what some political observers have labeled “the Trump effect,” in which the president’s foray into a debate ends up moving the public consensus away from his position — in this case is fueled entirely by Democrats.

Between June 2015 and June 2020, the share of Democrats who saw the flying of the Confederate flag mostly as a symbol of racism increased by 6 percentage points, from 52 percent to 58 percent. Since last month, that share has grown another 8 points, to 66 percent in the latest poll, conducted July 17-19. A survey earlier this month found 36 percent of Democrats heard “a lot” about the president’s criticism of NASCAR and Bubba Wallace, its lone Black driver, compared with roughly 1 in 5 Republicans and independents.

The dispute over the flag is a battle the president has largely waged on his own. Along with NASCAR’s ban, the state of Mississippi removed the Stars and Bars from its own flag, and just last week, the Pentagon took steps to effectively prohibit its display. News of that decision reached a majority of voters, the latest poll shows, with 24 percent reporting hearing “a lot” about it and 40 percent saying they heard “some.”

The new poll, which was conducted among 1,991 registered voters and has a 2-point margin of error, finds voters closely divided on the Confederate flag’s symbolism: 43 percent — including 74 percent of Republicans — say it is mostly a symbol of Southern pride.