Trump’s Edge on the Economy Has Evaporated

Former Vice President Joe Biden is gaining ground with voters on the economy, chipping away at President Donald Trump’s advantage on the electorate’s chief concern.

A new Morning Consult/Politico poll found the two major-party candidates are statistically tied on whom voters trust more to handle the economy, with 44 percent saying they trust Trump and 43 percent preferring Biden. The survey of 1,991 registered voters, conducted July 17-19, has a margin of error of 2 percentage points. 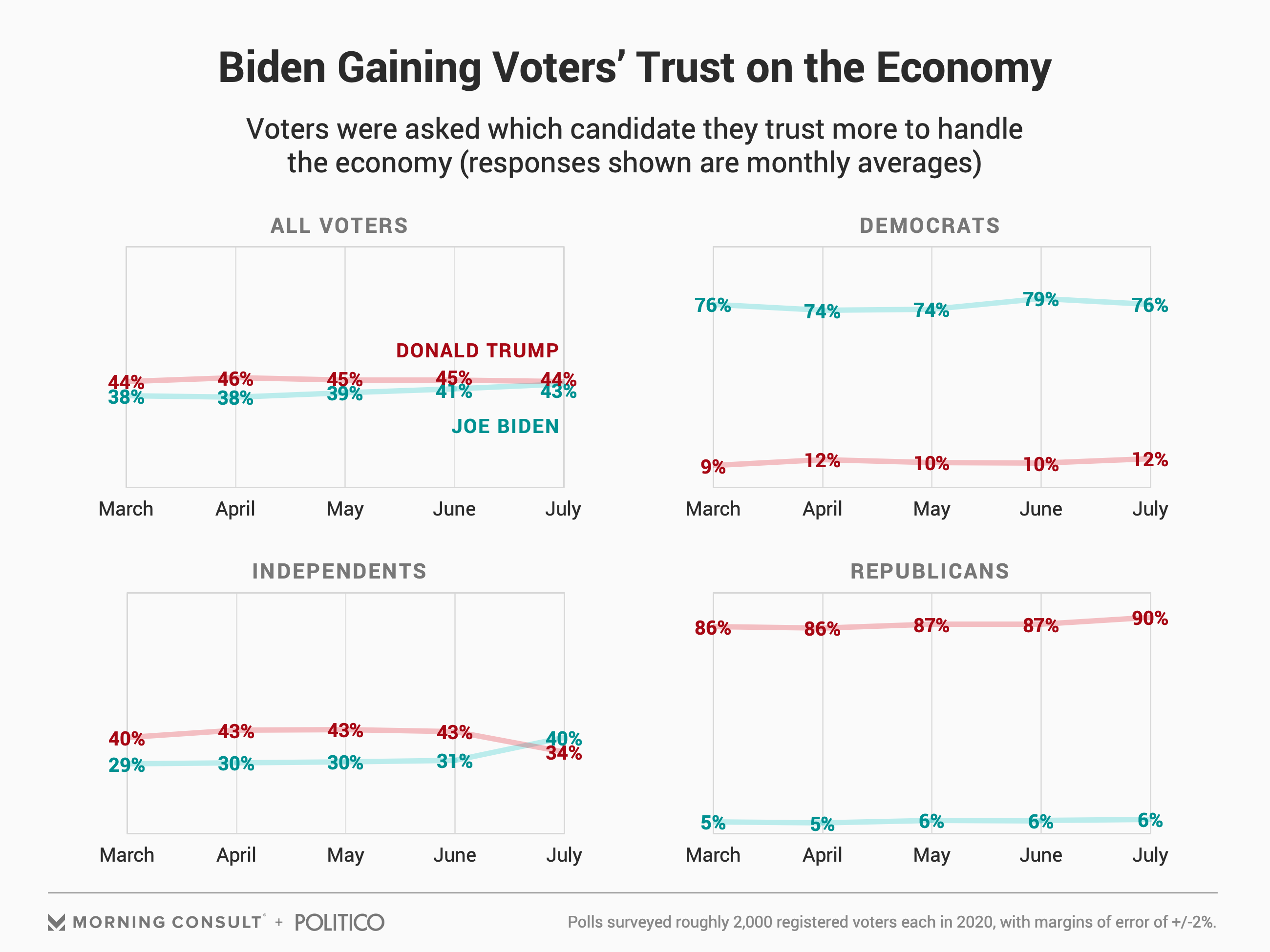 In eight polls conducted earlier this year, Trump led Biden on the question by an average of 6 points. That gap narrowed in June and July as coronavirus cases continued to mount and independents grew 10 points more likely to favor Biden on the question, from 30 percent in May to 40 percent in the latest survey. Thirty-four percent of independents said they trust Trump more to handle the economy, down 9 points since June.

But Trump holds an advantage over Biden in the election when it comes to voters who prioritize the economy: He leads the former vice president with that group by 12 points, 49 percent to 37 percent, according to Morning Consult’s latest weekly tracking of the 2020 contest, while trailing Biden by 7 points, 40 percent to 47 percent, among the broader sample of 31,310 registered voters. The poll was conducted July 13-19 and has a 1-point margin of error.

Economic concerns, always top of mind for voters in federal elections, are weighing even heavier on Americans amid the financial pain wrought by the coronavirus pandemic. In July, a third of voters said the economy was their top issue, up 8 points since polling conducted in February before COVID-19 brought the country to a standstill.

Biden’s gains on the economy come amid increasing voter confidence in his ability to get a grip on the virus: He leads Trump by 15 points on whom the electorate trusts more to contain its spread, doubling his lead on the question since last month. And looking ahead, he’s statistically tied with Trump on whom voters trust the most to handle the economic recovery following the pandemic, 43 percent to 42 percent.

The White House is moving to have Trump engage more with the public on the COVID-19 pandemic after spending months playing down the virus. On Monday, the president tweeted a picture urging Americans to wear masks, and on Tuesday, Trump appeared at a White House lectern for a press briefing to address the crisis after scaling back his then-daily briefings at the end of April.

The new tack comes as the share of voters who say it’s more important for the government to address the spread of the coronavirus than the economy ticked up to 66 percent, its highest point since late April and up 8 points since the beginning of June.

The movement was driven by GOP voters, a plurality of whom (49 percent) now say it’s more important for the government to address the virus following an 11-point increase since the beginning of June. It marks the first time the virus has taken priority over the economy for Republicans since late April.