Many Proposed Policing Reforms Are Popular — Even Among Police Officers 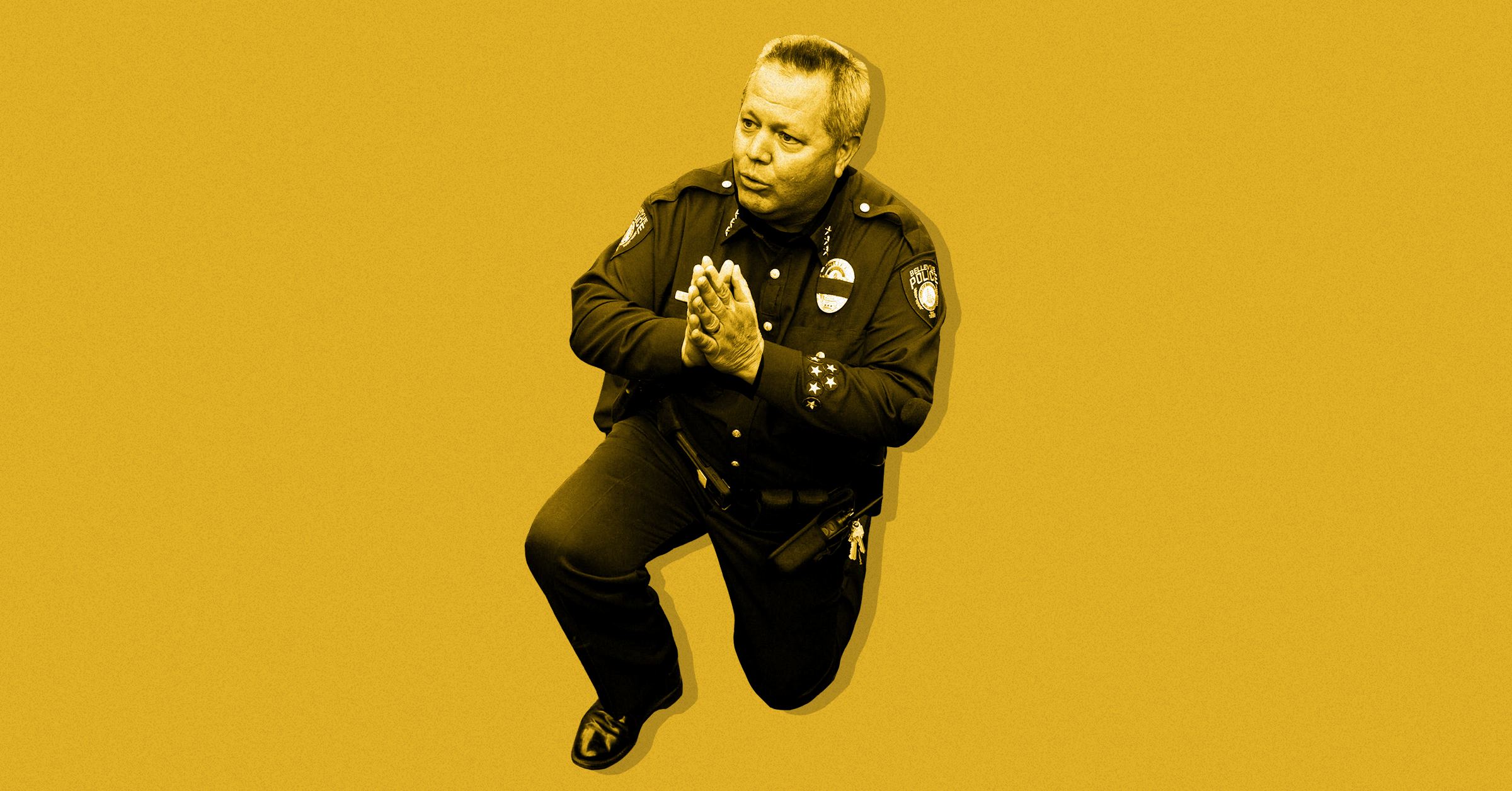 Sparked by the May police killing of George Floyd, widespread Black Lives Matter demonstrations and the ensuing debate about reining in law enforcement can give the impression that the country is at war with itself, with police officers on one side and protesters demanding change on the other. But new polling shows that’s not the case.

A Morning Consult survey of 256 registered voters who identified as police officers found majority support for a range of proposals catalogued by the pro-reform group Campaign Zero, which launched after the 2014 killing of Michael Brown in Ferguson, Mo., and from legislators seeking revisions to policing standards. The responses place law enforcement officers close to the broader public on a number of questions that are presently the subject of fierce debate among policymakers and police unions at the local, state and federal levels.

Share of the following voters who support proposals that prevent the following:
All
Police
0%
20%
40%
60%
80%
The supply of military weaponry to local departments
50
59
No-knock search warrants
62
59
The use of chokeholds by police
76
68
Qualified immunity for police
58
57
The use of quota systems for tickets, arrests
74
65

Most police officers (59 percent) support banning no-knock warrants, like the one that led to the March killing of Breonna Taylor in Kentucky, and restricting chokeholds (68 percent), such as those that led to the death of Floyd this year in Minneapolis and Eric Garner in New York City in 2014.

Most police also back allowing officers to be sued for actions performed on the job — effectively ending qualified immunity, the legal doctrine that shields them from liability — along with other reforms that target their contracts, such as preventing police departments from paying officers on administrative leave during an investigation following the use of deadly force or expunging records of past misconduct.

Broad support also exists for preventing the use of quota systems for tickets and arrests, and compared with the overall electorate, officers are 9 percentage points likely to get behind a ban on the sale of military weaponry from the federal government to local departments that have been deployed in response to demonstrations protesting police violence.

Share of the following voters who support proposals that require the following:
All
Police
0%
20%
40%
60%
80%
The wearing of body cameras
87
74
Dashboard cameras in vehicles
87
72
Mandatory recording of all interactions
79
69
Mandatory reporting of every stop
78
70
Reporting all uses of force to a national database
75
64

Majorities of police officers also back requirements aimed at enhancing accountability and transparency, such as body and dashboard cameras, mandatory recording and reporting of every stop and the use of a national database to compile all uses of force by police across the country.

Officers are more resistant to curtailing so-called “broken windows” policing, the enforcement of laws that activists say are used to unfairly target people of color. Relatively few said they opposed the enforcement of laws against loitering (37 percent), disorderly conduct (29 percent), trespassing (30 percent) and possession of marijuana (36 percent). Police were roughly divided on whether ordinances against jaywalking and spitting should be enforced.

In order to gather responses from a statistically significant sample of self-identified members of a local, state or federal police force, Morning Consult polled 9,962 registered voters from June 19-24. Responses from police officers have a margin of error of 6 points, compared with a 1-point margin of error for the broader sample.

Activists have pushed for officers to look more like the communities they’re policing. Particularly in urban areas, studies have found police forces to be whiter than the communities they serve, and one recent study based on Chicago Police Department data showed Black and Hispanic officers made “substantially fewer stops, arrests, and use force less often” than their white counterparts. This was especially true with regard to Black civilians. 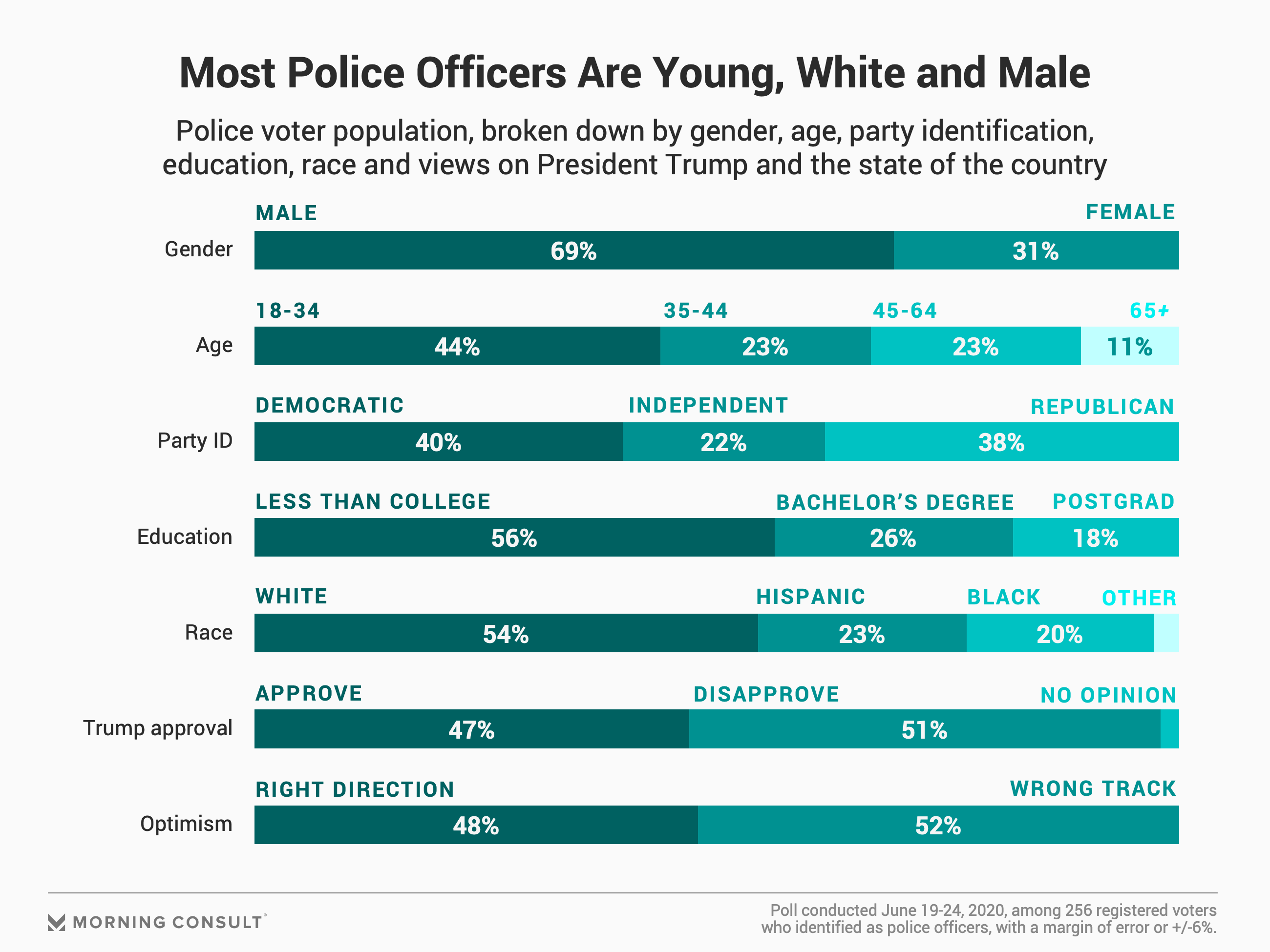 In Morning Consult’s national sample of police officers, 54 percent identified as white, while 20 percent identified as Black and 23 percent as Hispanic. Police in the survey skewed younger and more male than the average voter, and were also more likely to identify as Republican. As a result, they tend to have rosier views about President Donald Trump’s job performance and the trajectory of the country than the broader voting population.

While police were largely in step with the public on policy changes, gaps emerged on questions about broader systemic biases in law enforcement. 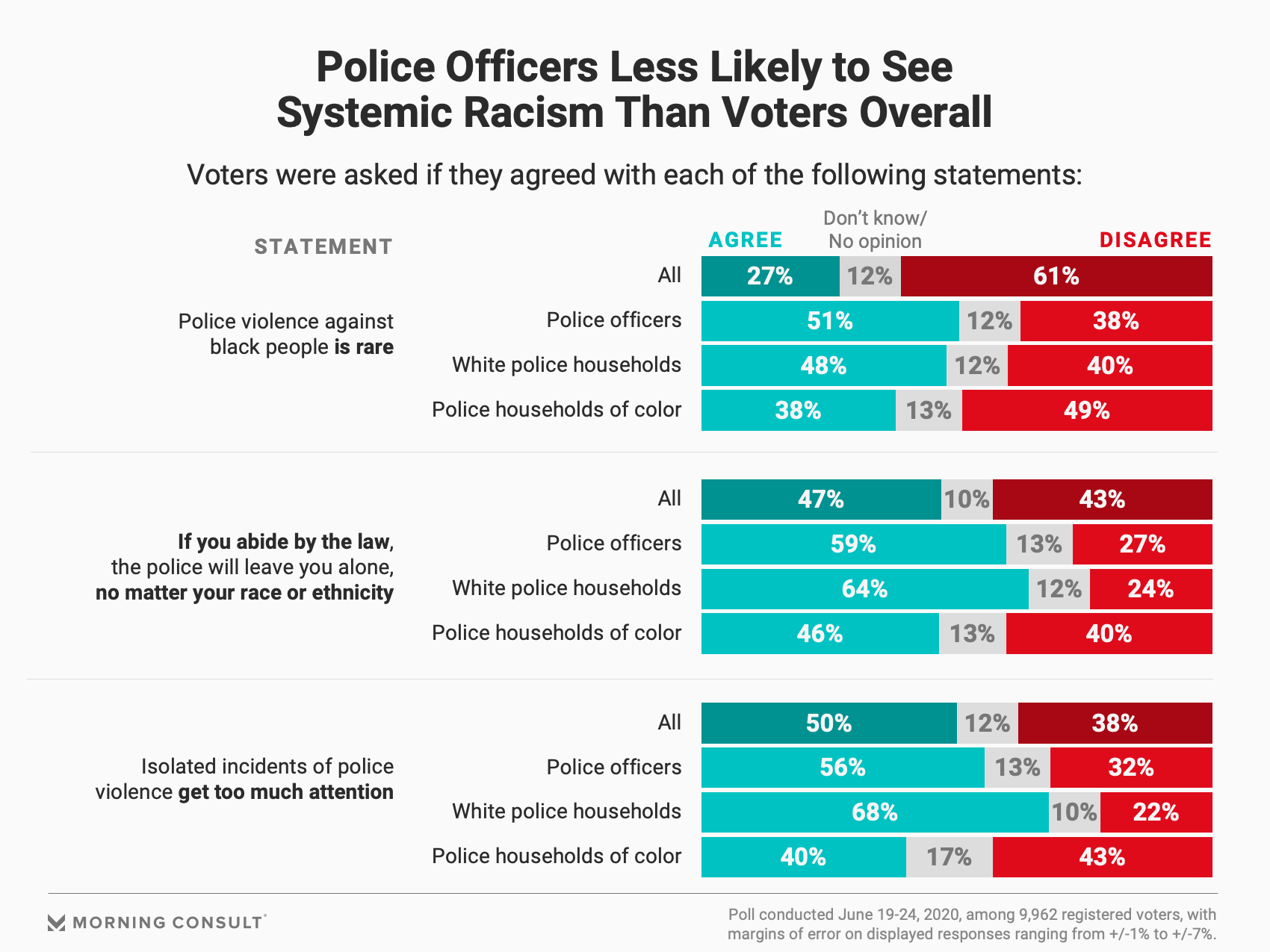 Roughly 3 in 5 officers agreed that the police will “leave you alone, no matter your race or ethnicity” if you abide by the law, compared with 47 percent of all voters. Police were also nearly twice as likely as the voting public to agree that police violence against Black people is rare.

Reflecting sentiment among the broader U.S. population, views on these topics of bias among police tended to be divided along racial lines: White voters in police households, which include the officers and those who live with them, were 18 points more likely than voters of color in police households to agree that those who are following the law will be left alone. A plurality of law enforcement officers (43 percent) said white Americans are treated better by the police than Black Americans, who, according to national data and state-level analyses, are disproportionately on the receiving end of traffic stops and fatal uses of forces. 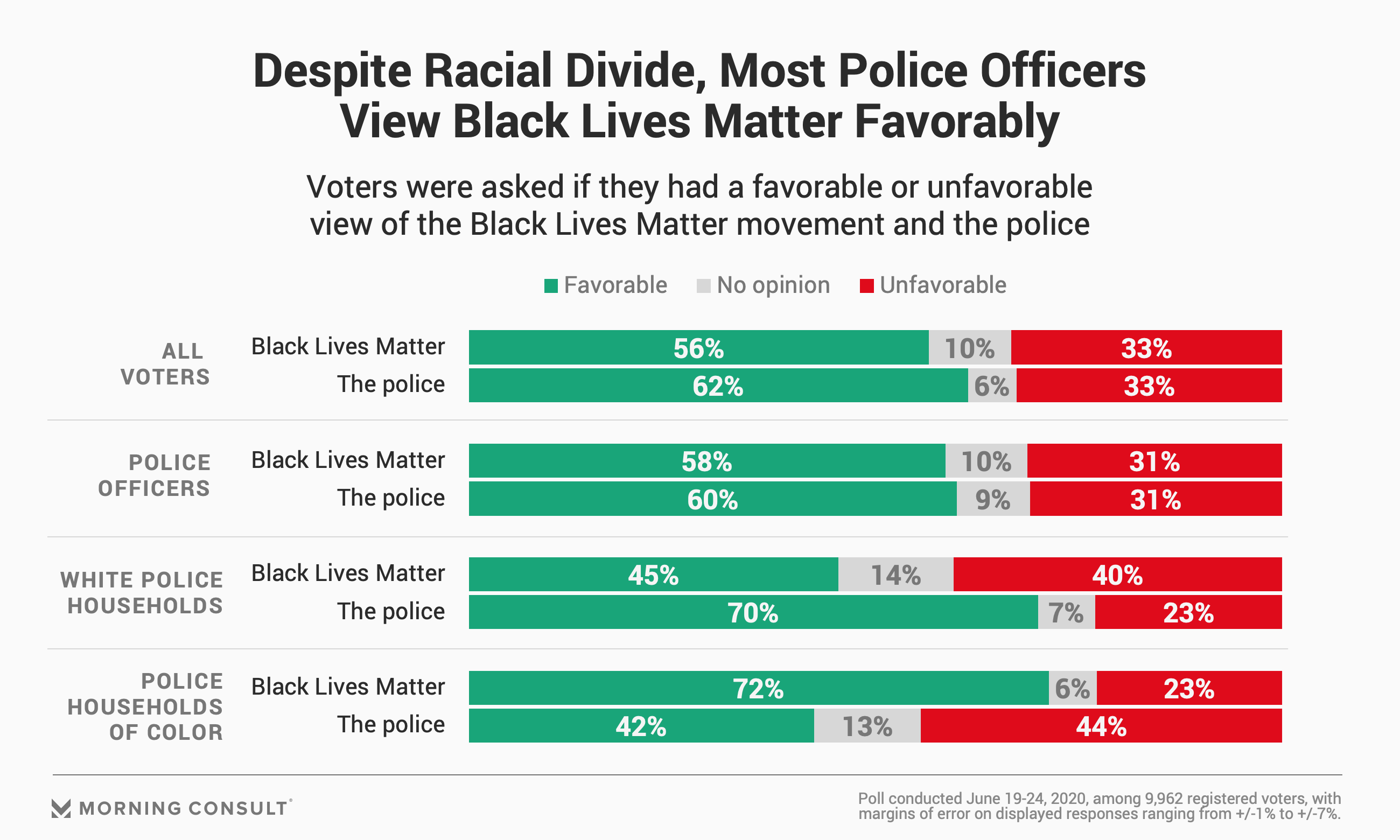