A plurality of Barstool Sports fans are Republican, and most are under the age of 35

Barstool Sports President sat down with President Donald Trump on July 23, 2020. Morning Consult polling shows that Barstool Sports fans are more likely to be younger, Republican and politically engaged than the rest of the country. (Photo via Twitter)
By Alex Silverman

Two controversial presidents known for their provocative rhetoric — Donald Trump of the United States and Dave Portnoy of Barstool Sports — met in the Rose Garden at the White House on Thursday for an interview.

The conversation marks the first time a sitting president has engaged with the polarizing media brand, offering Trump a platform to reach what could be a strategic audience in his re-election campaign. Morning Consult Brand Intelligence data finds that Barstool Sports’ admirers — those who reported having a “very favorable” view of the bro-y sports and pop culture blog — are younger, more interested in politics and more likely to identify as Republican than the general population. 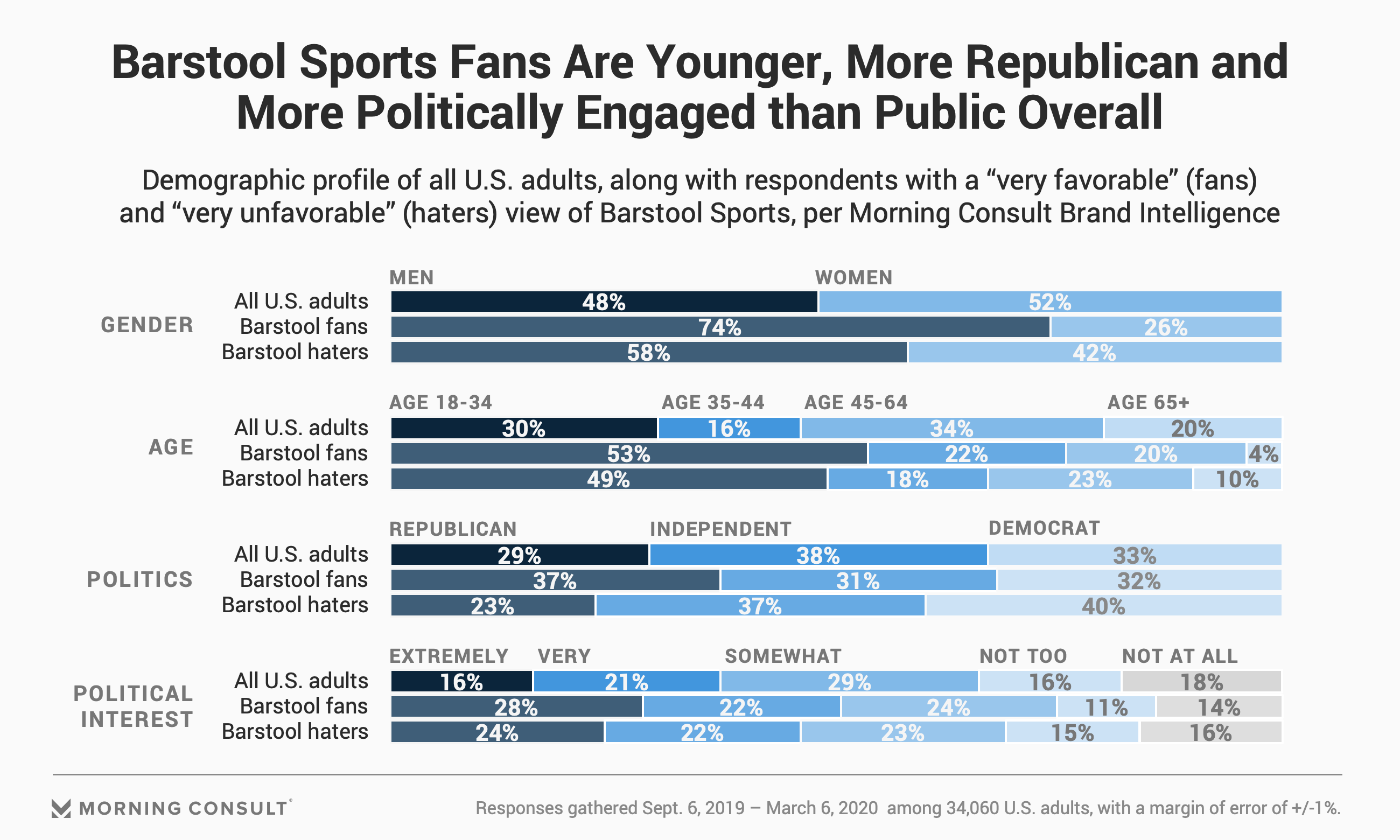 Usually an opinionated figure, Portnoy opened the interview by explaining to Trump that he considers himself “apolitical,” though in August 2015 he pledged his support for Trump in a post on the site that many laughed off at the time.

Trump and Portnoy discussed activism in sports, handshakes and political polarization in the three-part interview that clocked in at roughly 20 minutes total and was posted on Twitter by Portnoy on Friday afternoon. On the topic of athletes protesting during the national anthem, Portnoy suggested that embracing the kneeling would be a “small concession” for the president, but Trump pushed back and repeated his dislike of the activism. Then the two bonded over their mutual disdain for Roger Goodell, with Portnoy derisively calling the NFL commissioner’s video apology for the league’s handling of player protests “vintage Goodell.”

Asked how athletes should protest political and social issues, President Trump suggested running for office, then pivoted to discussing the quelling of civil unrest in Portland and protection of statues from defamation.

Critics of the interview, including popular Barstool personality Dan “Big Cat” Katz, have suggested that Portnoy allowed Trump to use Barstool’s goodwill with its fans as a vehicle to appear likeable and gain support in his re-election bid.

At one point, Portnoy asked if Trump could sympathize with his own experience of tweeting something and regretting it later.

“Often, too often,” Trump said, adding “it’s the retweets that get you in trouble.”

Portnoy also jokingly criticized Dr. Anthony Fauci, the nation’s top infectious disease expert who has reportedly irked Trump with his warnings for the public, saying that “every time he talks and says the country should stay inside, my stocks tank.”

Related: For Digital Sports Media, the Goal Is Getting Their Audience to Wear Them

Portnoy, who started Barstool as an independent print publication in the Boston area in 2003, has built a highly engaged following of “Stoolies,” known for their fierce loyalty to the brand and its personalities. Penn National Gaming Inc., a publicly owned casino operator, purchased a controlling 36 percent stake in Barstool earlier this year in a deal that valued the media company at a reported $450 million.

Portnoy has embraced controversy and stood up for Barstool’s irreverent and often offensive commentary, a posture that has made him loved by some and loathed by others. Critics have called the company racist and sexist based on comments and behavior by both Barstool personalities and its fans over the years.

In one recently resurfaced video, Portnoy was captured saying former NFL quarterback Colin Kaepernick looked like a “terrorist,” and in another, he used the N-word while doing an imitation. Amid online backlash and an effort to coax Barstool sponsors from dissociating with the company, he declared himself “un-cancellable.” 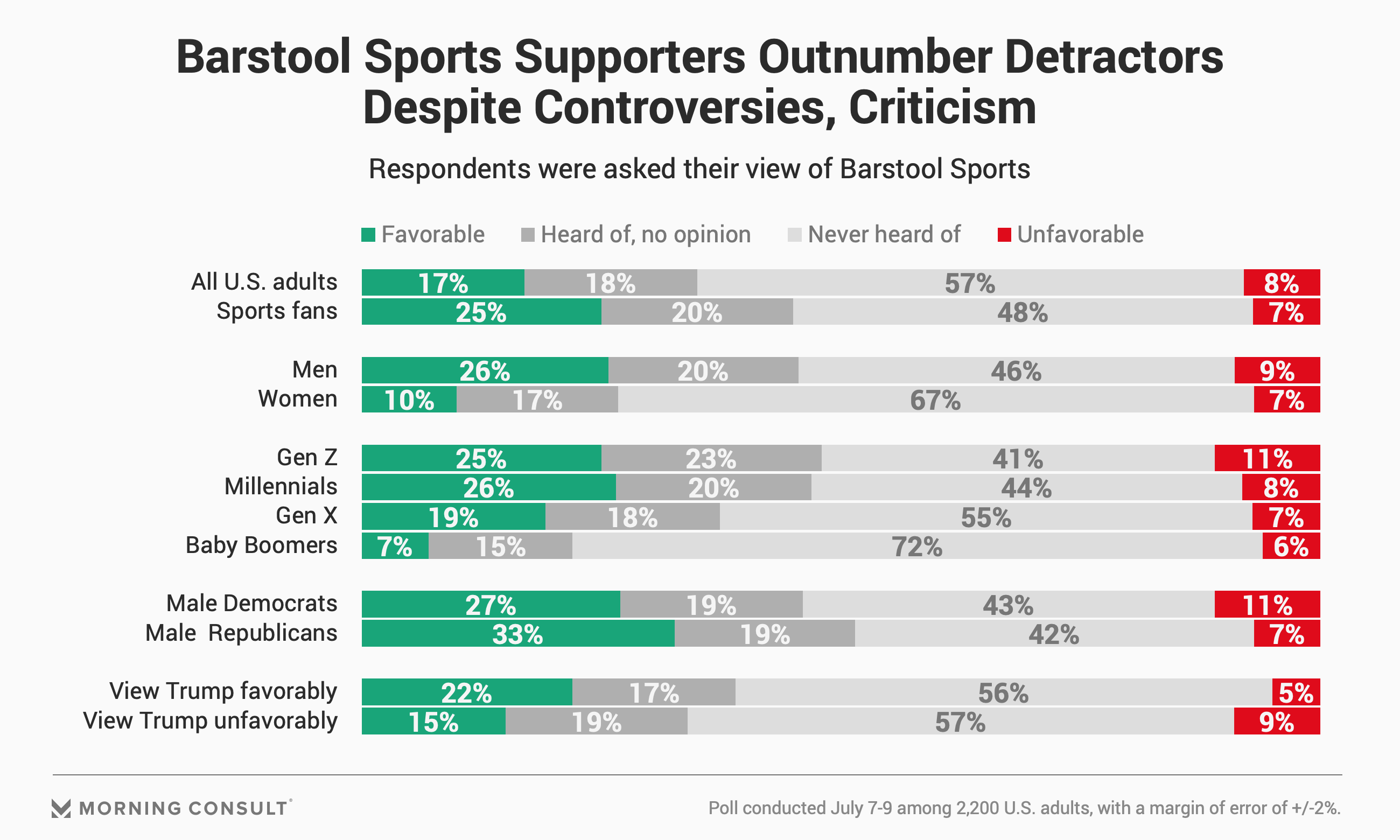 Still, a July 7-9 Morning Consult poll conducted in the aftermath of the video incident found that, despite the denunciation and controversy, U.S. adults were twice as likely to have a favorable view (17 percent) of the brand as an unfavorable one (8 percent). (Large majorities of the public have not heard of Barstool Sports or hold no opinion of it.) Sports fans are more than three times as likely to have a positive view of the company than a negative one.

Last year, Portnoy sparred with Rep. Alexandria Ocasio-Cortez (D-N.Y.) on Twitter after he threatened to fire any Barstool employees who attempted to unionize. In 2017, ESPN canceled “Barstool Van Talk,” a show it launched featuring “Pardon My Take” podcast hosts Katz and Eric “PFT Commenter” Sollenberger, after one episode when employees raised concerns about misogyny on the part of Barstool personalities, most notably Portnoy calling sportscaster Sam Ponder a “slut” in 2014.