Half of Streaming Subscribers Can’t Decide What to Watch, but Just One-Third Would Use a Feature That Picks a Program for Them

36% of streaming subscribers -- including 56% of respondents who subscribe to five or more services -- said they were likely to use a shuffle feature that randomly selected a film or TV show for them to watch. (Pexels / cottonbro)
By Sarah Shevenock

It’s a common question in our modern times that’s gained new importance amid the pandemic: “What do you want to watch tonight?”

With more than 200 streaming services on the market — each with its own content library — that question is becoming more difficult to answer. FX Networks’ most recent Peak TV report found that there were 532 U.S. scripted original dramas, comedies and limited series in 2019, up from 495 in 2018.

And as Netflix Inc. continues to test a shuffle feature that randomly selects content for viewers, polling finds that some streaming service subscribers are interested in technology that will help them simplify their decision making. 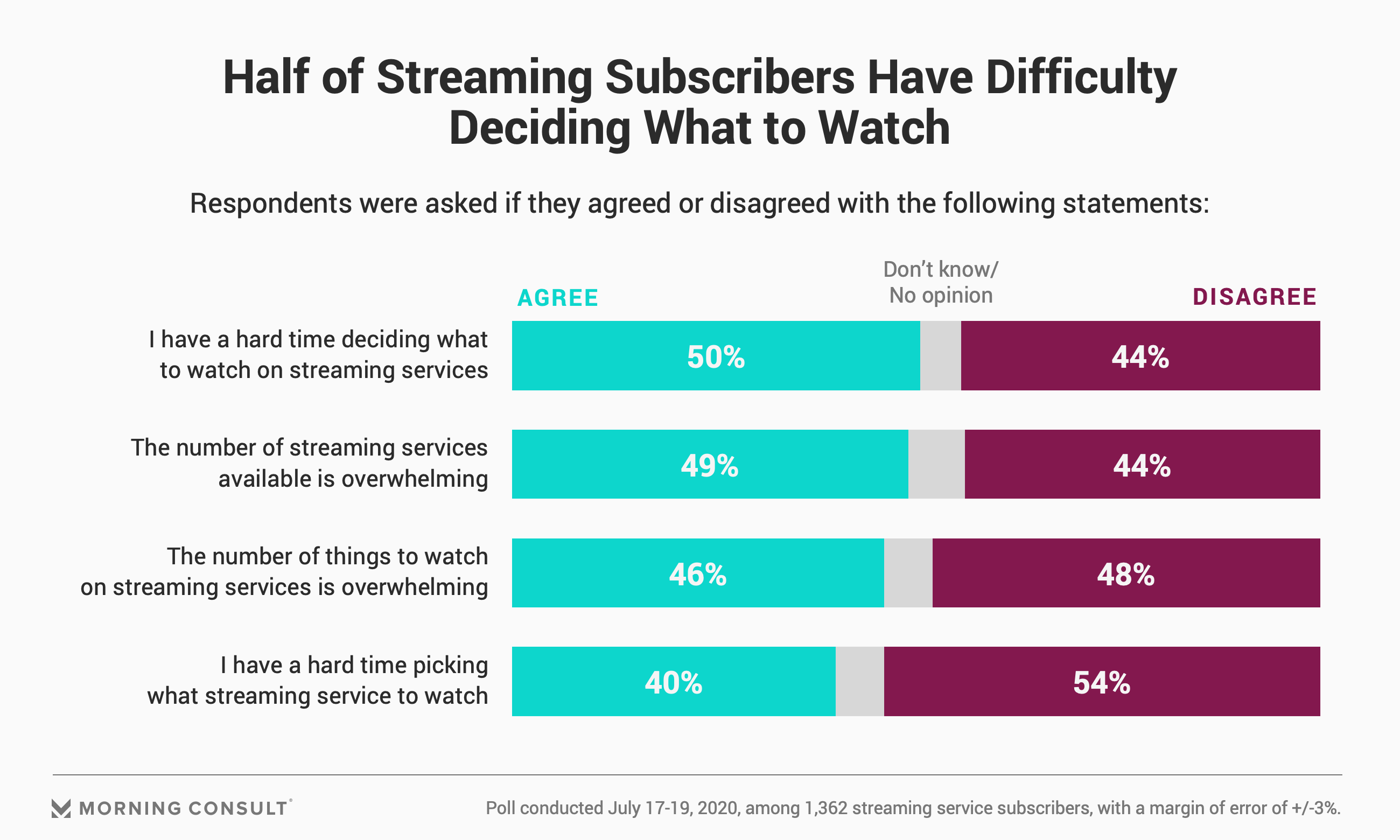 A July 17-19 Morning Consult poll found that half of the 1,362 streaming service subscribers surveyed have a hard time deciding what to stream. And data from Reelgood, shared exclusively with Morning Consult, helps illustrate why: The roughly 140 streaming services available in the United States that Reelgood tracks, offer 76,366 movies and 16,177 TV shows for viewers to choose from.

That said, when it comes to the amount of content available on these services, subscribers are largely satisfied with their options: Fifty-eight percent said there are the right amount of entertainment options available to watch on streaming services, while 27 percent said there are too many. The share who are satisfied with the amount of options does not change based on how many streaming services a respondent subscribes to.

“I think it’s really important for the consumer to have a significant amount of choices,” said Brad Gastwirth, chief technology strategist with Wedbush Securities. “I agree that consumers are more frustrated now than ever with having more choices, but I also think that’s a better thing than having less.”

Steve Nason, director of research at Parks Associates, said with services offering so many films and TV shows, one of the largest challenges facing all OTT services is “content discovery and content recommendation.”

“The amount of content within a service and across services just makes it overwhelming,” he said.

Related: Even Quibi’s Target Audience Isn’t Buying What the Platform Is Selling 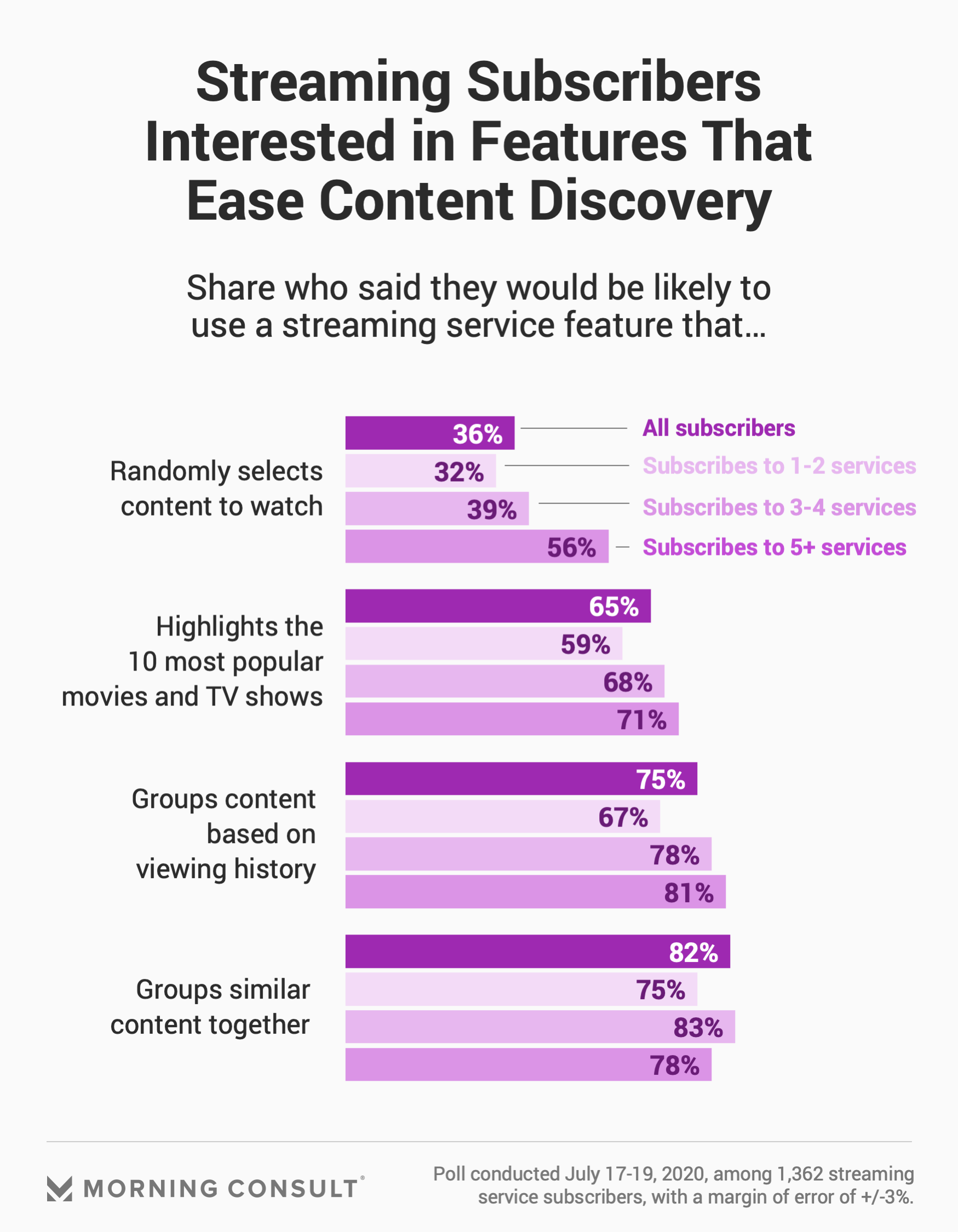 Subscribers were divided on this point: Forty-six percent said the amount of content on streaming services was overwhelming while 48 percent did not.

Fewer options may be better when it comes to decision making. According to a study published in the journal Nature Human Behaviour, eight to 15 choices is the prime amount for people to pick from when making a decision, providing a variety of options without overwhelming the individual. Gastwirth said that while it varies from service to service, users are often presented with anywhere from six to 18 options when they open an app to watch something.

The polling comes amid reports that Netflix has begun a second round of testing a shuffle feature that will randomly select a movie or TV show to watch. Netflix, which initially tested the feature in 2019, declined to comment for this story.

More than a third (36 percent) of streaming subscribers said they were likely to use a shuffle feature — something Nason said could be used to introduce Netflix originals — but the feature is more popular with consumers who subscribe to multiple platforms: 56 percent of those with access to at least five streaming platforms said they’d be likely to use a shuffle function.

“It certainly is a way for them to better promote their original content and give consumers at least exposure, if not actual engagement with, other content they may be interested in that is originally produced,” Nason said.

But Gastwirth said that while the feature could aid content discovery, it wouldn’t necessarily be a feature that would motivate a potential customer to subscribe, adding that content is still the top draw for consumers considering purchasing a streaming service.

Interest among respondents in top 10 lists, similar to the one Netflix introduced earlier this year, was high, as was grouping similar types of content, something HBO Max and Disney+ have introduced on their platforms, displaying brands such as Marvel and DC Comics together.

Sixty-five percent of streaming subscribers said they were likely to use a top 10 list, while 82 percent said the same of content groupings.

The survey, which was conducted among 2,200 U.S. adults, has a margin of error of 2 percentage points. The subsample of streaming subscribers has a 3-point margin of error.