After moving in lockstep during the early stages of the pandemic, consumer confidence in the United States and Europe resumed taking opposite paths, which shows that an economic recovery isn’t possible without a meaningful reduction in COVID-19 cases, Morning Consult economist John Leer writes. 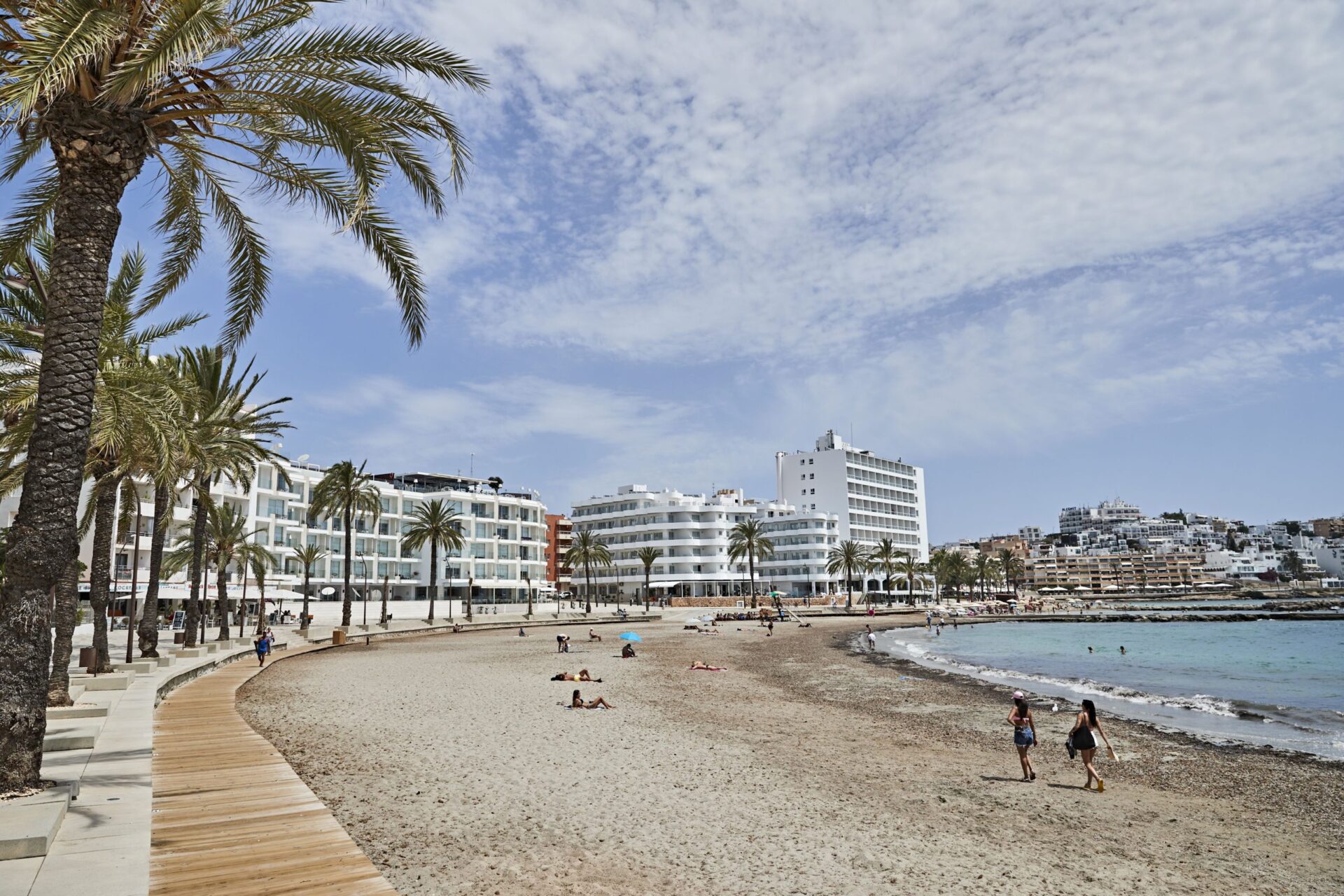 A relatively empty Figueretas beach on July 28 in Ibiza, Spain. Britain, whose citizens make up the largest share of foreign tourists in Spain, ordered citizens returning from Spain to self-quarantine for 14 days, citing a rise in coronavirus cases. (Andres Iglesias/Getty Images)
By John Leer

Trends in consumer confidence across Europe and in the United States are diverging for the first time since the early days of the coronavirus pandemic in March, indicating that consumers in four of the largest European economies have reverted to their pre-pandemic approach to assessing the economic relevance of news updates while American and Spanish consumers remain fixated on the spread of the virus.

According to Morning Consult’s Index of Consumer Sentiment, consumers in Germany, Italy and France are growing more confident in the economy, while confidence in Spain and the United States is falling. Meanwhile, consumer confidence in the United Kingdom remains essentially unchanged from where it was last month.

The divergences in confidence since mid-June sharply contrasts with the period from March to June when consumers reacted similarly across Europe and in the United States. These recent divergences reflect differences in the underlying state of the coronavirus in these countries as well as in structural features of these economies and in their economic policies. 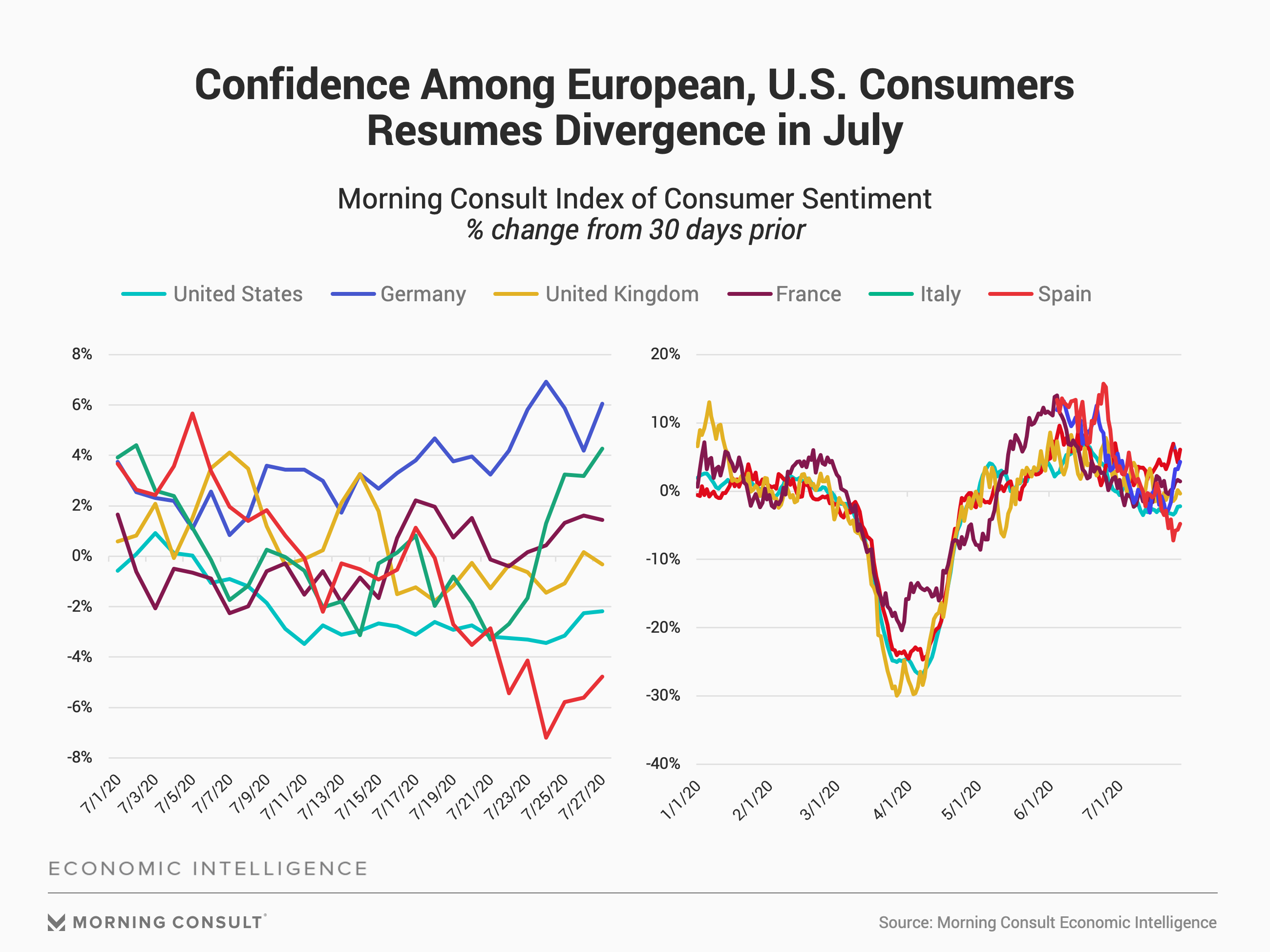 The biggest driver in explaining cross-country variation in consumer confidence remains the coronavirus pandemic. The risks posed by the coronavirus pandemic to consumers and their finances vary across countries. On a per capita basis, cases in the United States are significantly higher than they are in any of the other European countries. Of the European countries included in this analysis, Spain is experiencing the largest increase in new cases on a per capita basis. 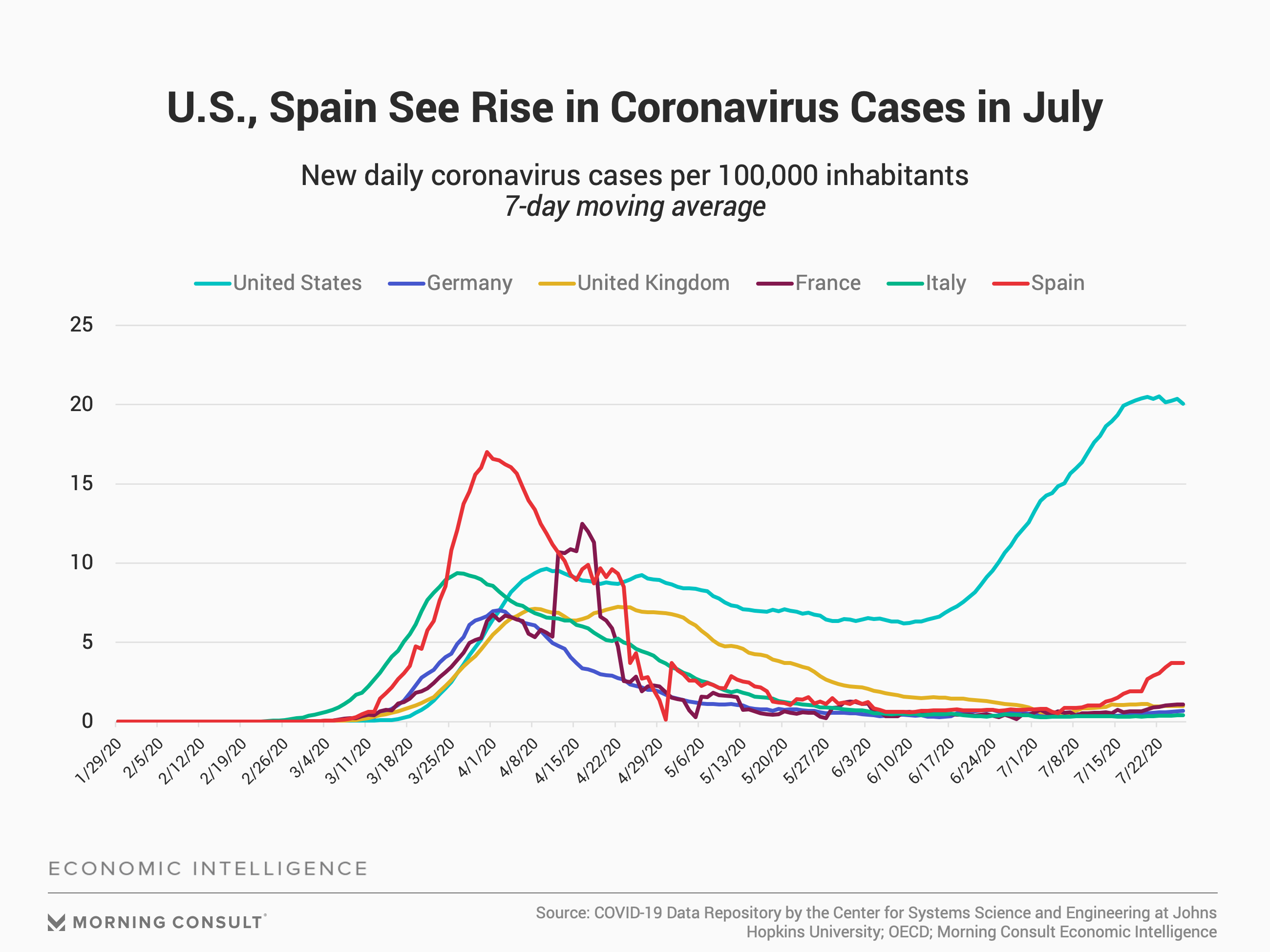 Table 1: Correlation between number of new cases per capita and daily consumer confidence 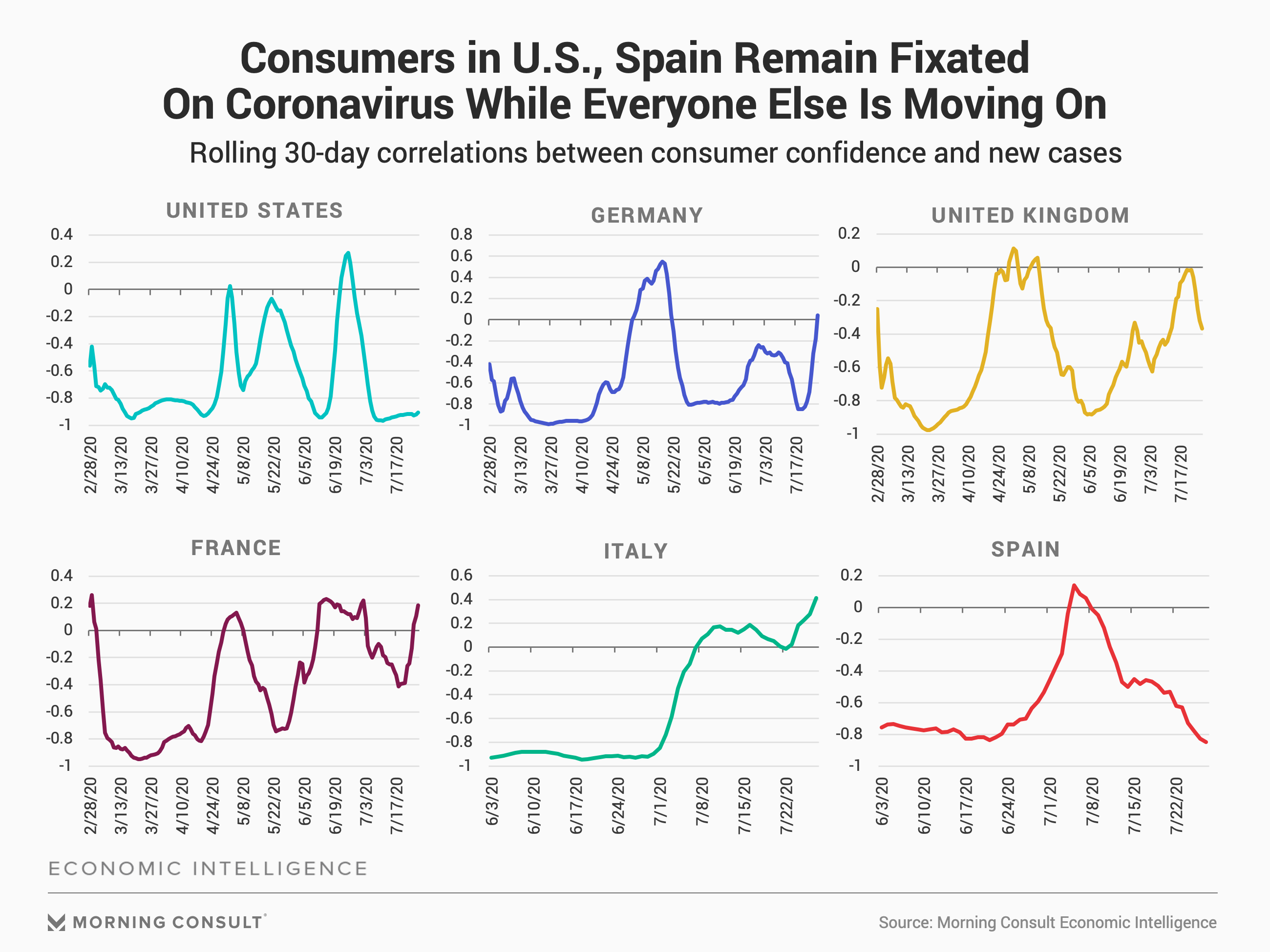 The correlations tend to remain below zero, which is consistent with the earlier table listing correlations over the entirety of the time period. When the number of cases in a given country increases, consumer confidence tends to fall, thereby producing a negative correlation. The United States and Spain are the only two countries where the correlations remain strongly negative, indicating that consumers’ views on the economy in these countries continue to closely track developments with the virus.

Currently, consumers in Germany, the United Kingdom, France and Italy appear to no longer pay much attention to the coronavirus. The number of cases is neither driving confidence higher nor lower. It is simply not a concern for consumers in these countries at this point in time.

Although the number of daily new cases per capita in Spain is far lower than it is in the United States, changes in consumer confidence in Spain exhibits a similar correlation with the number of new cases as it does in the United States. One likely explanation for the outsized effect of the virus on Spanish consumers is Spain’s dependence on tourism, which increases its economic exposure to the fallout from the pandemic. Prior to the pandemic in 2017, 11.8 percent of the Spanish GDP came from tourism, compared to only 2.9 percent of gross value added (GVA) in the United States. Consequently, travel restrictions limiting European and American travel disproportionately affect the Spanish economy relative to the U.S. economy.

Part of the explanation for the drop in confidence in Spain may also have to do with the recent announcement from the United Kingdom mandating any of its citizens returning from Spain must self-quarantine for two weeks given the recent increase in new cases in Spain. Spanish residents may have become more aware of the detrimental effects of the virus on the economy in the wake of the announcement.

Spain is not unique in Europe in terms of its reliance on demand from outside its borders. The Italian and German economies are highly dependent on tourism and exports, respectively. However, unlike Spain, consumer confidence in Italy and Germany is on the rise.

Confidence in Italy and Germany appears to have benefited from the recent spending 1.8 trillion euro ($2.1 trillion) agreement reached by the leaders of member states of the European Union. The agreement provides a mechanism for richer countries like Germany to transfer funds to poorer countries like Italy that have been most affected by pandemic. It is perhaps not surprising that consumer confidence in Italy surged in the days following the July 21 agreement since the Italian consumer stands to directly benefit from such an agreement.

What is more surprising is that consumer confidence in Germany also increased, albeit not quite as much as it did in Italy. This response from German consumers indicates that they acknowledge the long-term significance of the agreement for the European and German economies. The ability of European countries to use fiscal transfers to address disparities in the impact of economic shocks throughout the European Union reduces the risk of certain countries being economically left behind. From an economic perspective, it increases the appropriateness of the European Central Bank’s monetary union and decreases the risk of sovereign defaults. Both of these developments would be good for German consumers.

The decrease in confidence in Spain is even more significant when viewed against the backdrop of increases in confidence across the continent. Like Italy, Spain is likely to benefit from receiving transfers from other richer countries. In a somewhat perverse way, the recent surge in cases in Spain actually increases the likelihood of Spanish consumers benefiting from the EU agreement. Spanish consumers do not appear moved by this logic. While the agreement may benefit Spanish consumers down the road, they remain focused on the pandemic’s immediate economic effects.

Given developments in the coronavirus, economic policy and consumer confidence, the economic outlook for German, French and Italian consumers has improved over the past month. A prior comparison of the U.S. and European economies assumed similar trajectories of the virus across both continents. Under that assumption, the jobs retention programs in Europe were likely to support consumption in the short term but ultimately increase unemployment and decrease business investment as the cost burden shifted from governments to businesses.

The assumption that the trajectory of the virus would be similar in the United States and Europe has proved incorrect. At this point in time, it appears as though demand in Europe will rebound before a greater share of the costs of job retention schemes is shifted from governments to European firms. By aggressively limiting the spread of the virus and keeping workers attached to their jobs despite furloughs or temporary closures, consumers in Germany, France and Italy are in a stronger position to resume spending than those in the U.S. and Spain.

On the other hand, the U.S. and Spanish economies remain beholden to the ongoing spread of the coronavirus. Confidence in both countries likely contracted in July, exerting downward pressure on consumer spending. These real-time cross-country divergences are relevant to businesses as they forecast demand for their goods and services over the remainder of the year.

From a policy perspective, these findings send a fairly clear message that containing the spread of the coronavirus is a necessary condition for reigniting consumer confidence and spending. The U.S. Congress is currently debating how much financial support to provide unemployed workers and U.S. households, but though direct financial assistance is important, sustainable growth in U.S. consumer spending requires containing the spread of the virus.

One possible risk of decreasing the value of the expanded weekly unemployment benefits is that it may drive workers in high-risk industries to seek out and obtain work at job sites that accelerate the spread of the virus. Thus, any assessment of the costs of these programs has to subtract the loss in GDP likely to occur due an increase in the spread of the virus, a decrease in consumer confidence and a decrease in consumer spending and business investment. The actual cost of funding additional unemployment insurance benefits is almost certainly less than the sticker price, and comparing the United States and Europe provides a clear picture of that counterfactual.