Presumptive Democratic nominee Joe Biden’s pending vice presidential pick is unlikely to have an immediate impact on the state of the race against President Donald Trump, according to a new Morning Consult/Politico survey.

The July 24-26 poll found no significant difference in the Democratic ticket’s lead against Trump and Vice President Mike Pence when Biden is lined up next to a dozen women believed to be in consideration for his No. 2 spot, including Georgia Democrat Stacey Abrams, Atlanta Mayor Keisha Lance Bottoms or Michigan Gov. Gretchen Whitmer. 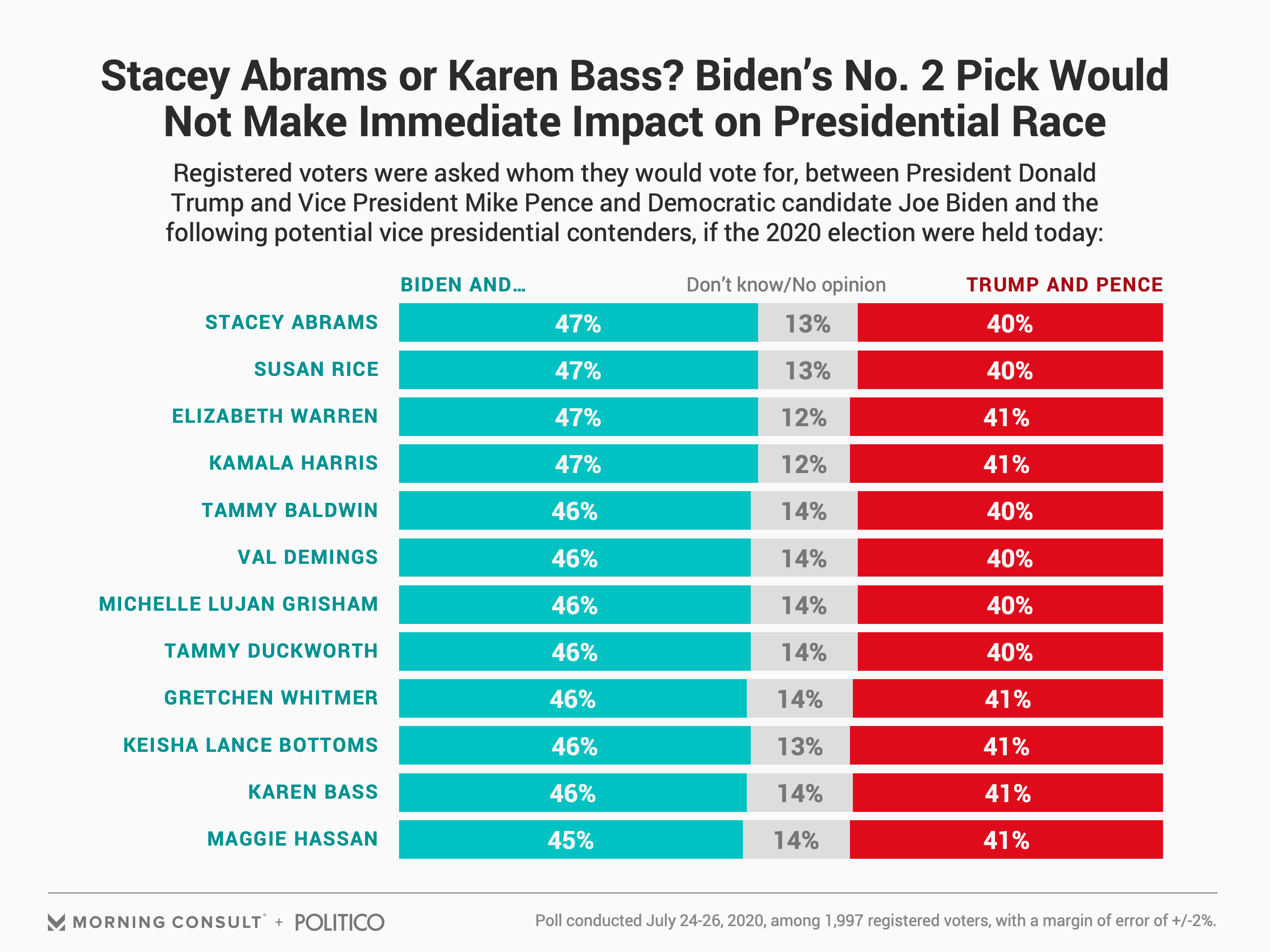 In the survey of 1,997 registered voters, Biden’s ticket would lead Trump’s by an average of 5 percentage points, 46 percent to 41 percent, regardless of whether he picked a running mate as universally known as Sen. Elizabeth Warren (D-Mass.) or one who lacks national name recognition, such as Congressional Black Caucus Chairwoman Karen Bass (D-Calif.).

The average top-line figure is similar to Biden’s lead in a poll of registered voters nationwide released last week, while Biden’s advantage over the president is larger with likely voters, according to new Morning Consult polling. Biden said Tuesday he would make a decision about his vice presidential running mate next week.

At this stage, Warren is by far the most prominent name in the mix, with 9 in 10 voters recognizing her name, followed by Sen. Kamala Harris (D-Calif.), whom 79 percent of voters had heard of nationwide. Voters were roughly split in their views of the former presidential candidates, though Harris was slightly more popular. 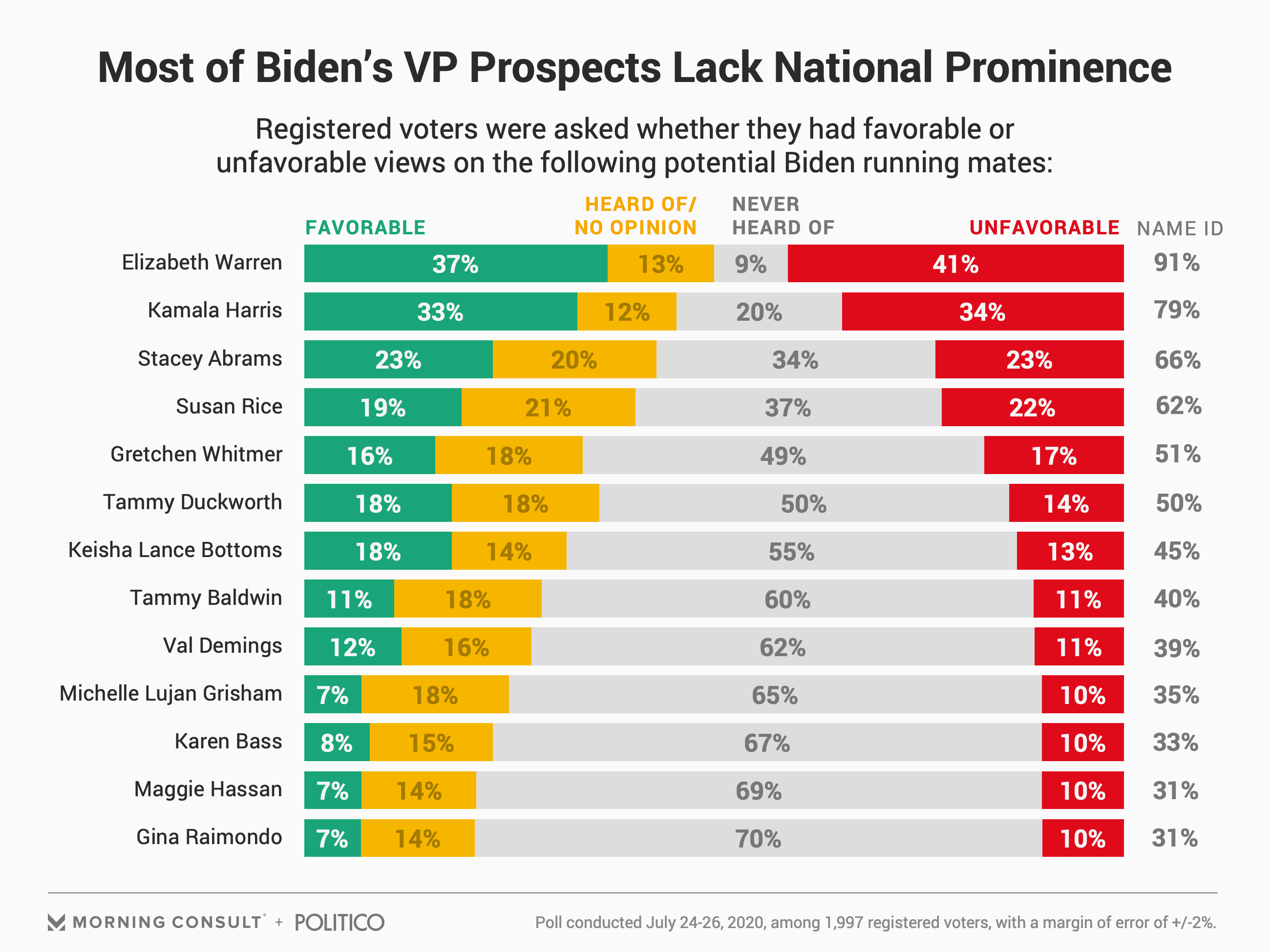 Half of voters have heard of Sen. Tammy Duckworth (D-Ill.) — a veteran, double amputee and prominent voice in the party on military issues — and 45 percent have heard of Bottoms. While few voters have formed views on either woman, Duckworth and Bottoms were more popular than their lesser-known peers, and were viewed more favorably by independent voters and those who live in the suburbs.

Fewer than 2 in 5 voters have heard of Bass or Rep. Val Demings (D-Fla.), a Black former police chief, both of whom recently received elevated attention amid resurgent Black Lives Matter demonstrations and the debate over policing practices.

The poll serves as a baseline before Biden’s running mate announcement, at which point Trump and his Republican allies will have the chance to fully paint their picture of whoever lands the No. 2 spot on the ticket.

But vice presidential picks have rarely made a large impact in previous presidential contests, research shows, unless the pick is exceptionally popular or unpopular. One study, from Bernard Grofman and Reuben Kline in 2016, found that a running mate does little to get voters to cross party lines, and another, from political scientists Kyle Kopko and Christopher Devine as summarized in Politico in 2016, found the lack of influence to be true even in the running mate’s home state, undermining the conventional wisdom.

But even if voters don’t prioritize vice presidential picks, they do have ideas about what qualities Biden’s No. 2 should have: The poll found voters continue to be most likely to prioritize executive experience (56 percent say this is important) and legislative experience (61 percent dub it important) in his running mate, while about half say it’s important she be younger than him.

About 3 in 10, including 46 percent of liberals and 42 percent of Black voters, say it’s important for Biden to pick a person of color.