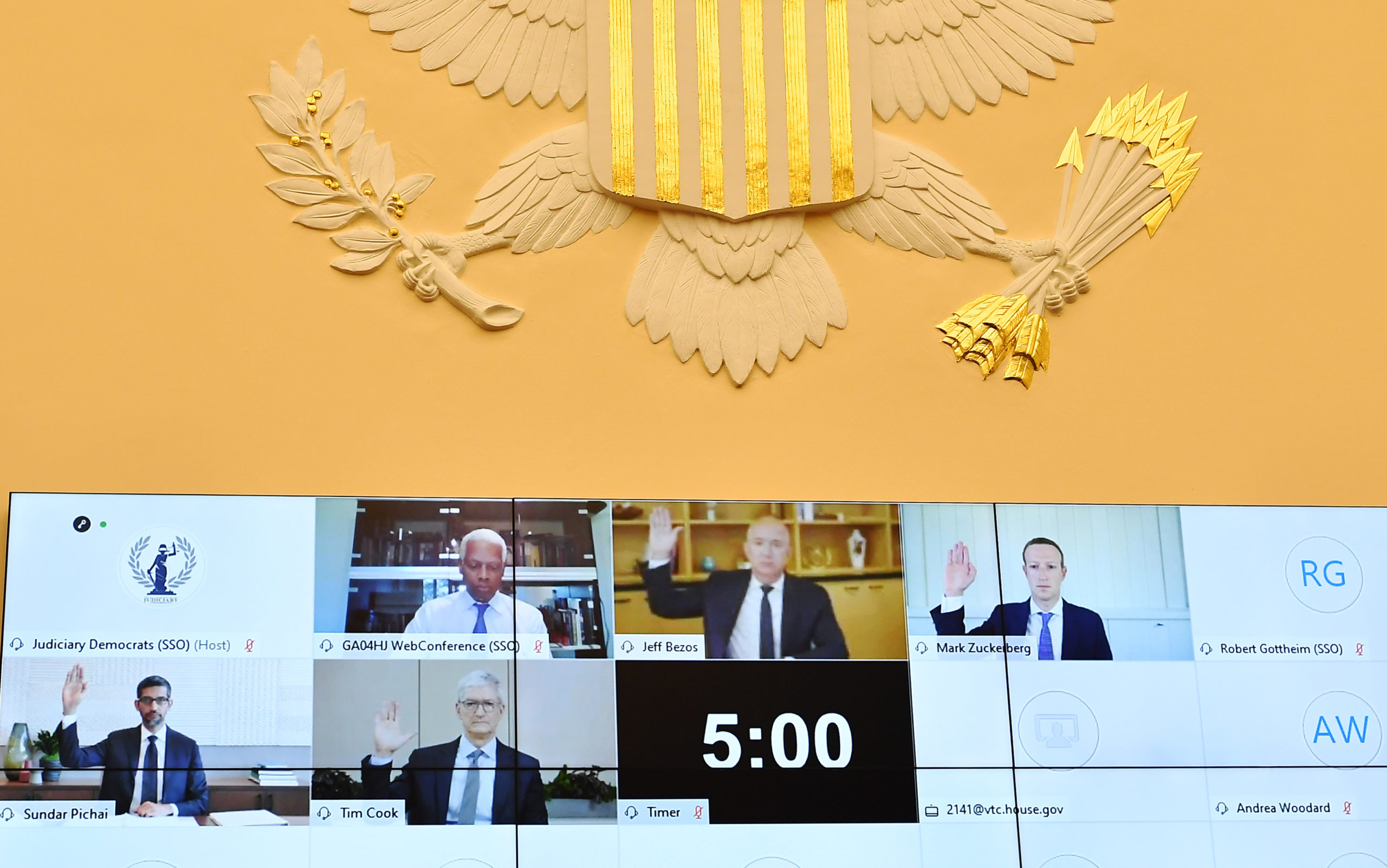 Lawmakers on the House Judiciary Committee’s antitrust subcommittee pressed the chief executives of Alphabet Inc., Amazon.com Inc., Apple Inc. and Facebook Inc. on Wednesday as part of its ongoing investigation into the companies’ market power in the tech industry and whether they engage in anti-competitive practices.

The hearing focused on many allegations of anti-competitive practices at the large technology companies, with several lawmakers focusing on a range of newly released evidence garnered from the nearly 14-month antitrust investigation into the industry. Rep. David Cicilline (D-R.I.), the subcommittee chairman, mentioned allegations of a multi-pronged attack against Yelp Inc. after Google threatened to delist the reviews site following its complaints that Google was copying its reviews. And new emails, reported by The Verge during the hearing, about Facebook’s acquisition of Instagram were at the forefront of Judiciary Committee Chairman Jerrold Nadler (D-N.Y.)’s questioning.

Cicilline told reporters after the hearing that the subcommittee’s report concluding its investigation should be out in late August or early September.

And while experts say that Democratic members typically zeroed in on issues related to the investigation, many Republican members focused on allegations of anti-conservative bias on Facebook and Google, while others, including Reps. Matt Gaetz of Florida and Ken Buck of Colorado, accused Google of being unpatriotic when it pulled out of military contracts. House Judiciary Ranking Member Jim Jordan (R-Ohio) questioned the executives about the state of “cancel culture” following the departure of conservative writer Bari Weiss from The New York Times, a line of questioning that led Amazon’s Jeff Bezos to call social media a “nuance destruction machine.”

Notably, Bezos said the company was still investigating claims in a Wall Street Journal story earlier this year that company employees had access to independent third-party data and used it to help inform Amazon’s private label business, and that he can’t guarantee that the policy against using the data in those ways “has never been violated.”

Morning Consult asked lawmakers, experts and analysts for their opinions on the hearing with the four Big Tech CEOs:

Related: Ahead of Big Tech Hearing, Less Than Half of the Public Trusts Congress to Best Regulate the Industry

“The testimony we witnessed today confirmed the evidence that we’ve collected over the last year that shows these companies have enduring monopoly power and have a very dominant position in the marketplace, and that they’re engaged in behavior that’s anti-competitive, which favors their own products and services, which monetizes and weaponizes data, which compromises the privacy of their users and which creates a competitive disadvantage to companies that are attempting to enter the marketplace,” Cicilline told reporters following the hearing.

“There is no doubt that these are great American companies that serve an important function for the American people, but it would be nice to see them take greater steps to protect users’ personal information, which is very critical in this country, and also create an environment that allows other countries to expand their competitiveness and their innovation,” Demings said in brief interview with Morning Consult following her questioning focused on Google’s privacy practices. “Those are the two main things that we need to see.”

Related: Before Hearing With Big Tech CEOs, Lawmakers Lay Out Different Visions for Its Focus

“Today’s hearing clearly documented what we’ve seen in the digital advertising market,” Weinberg said in an email. “Access to immense amounts of data allows companies to preserve and cement their own dominant position in the marketplace, to the disadvantage of individual consumers, small businesses, and the public at large.”

“This is like the search for El Dorado: it just doesn’t exist. As much as the chairman might want to believe that there’s a case for antitrust, it just doesn’t exist,” Szabo said of the evidence laid out so far by the committee that anti-competitive behavior exists in the tech sector.

“Even if I were to give them the argument, which I disagree with, that there is anti-competitive behavior, you’re still two key prongs short of a case. Chairman Cicilline and many of the members up there are well-versed in the law enough to know that unless you prove all of the elements of a crime, there is no crime. That’s why you’re hearing many of these members scour around and sensational comments, but not evidence of antitrust.”

“What they got out of these CEOs is grounds for restructuring these markets,” Stoller said. “The CEOs looked generally predatory, but the people that looked really bad were the enforcers — the FTC and the DOJ. After asking all of these questions about why they were able to do this practice and buy that company, you wonder why the enforcers didn’t act.”

“They’re succeeding at pointing at the set of anti-competitive practices that we’ve all had a sense that these companies are using, and you’ve seen based on various appeals to documents that they seem to have concrete evidence that some of these practices that the CEOs seem to be denying are, in fact, taking place in a way that is known,” he said with regards to the new evidence shared about Yelp’s threat of delisting and the new emails regarding the Instagram acquisition.

“We’re going to see a report that talks about the big tech companies having monopoly, lots of market power and a call for more power to antitrust authorities to break these companies up, push them down to size, whatever that may be,” Jamison said regarding what the line of questioning at the hearing says about what to expect from the subcommittee’s anticipated report concluding its investigation.

This story has been updated with comments and news from the hearing.