Ahead of Big Tech Hearing, Less Than Half of the Public Trusts Congress to Best Regulate the Industry

Facebook’s Mark Zuckerberg arrives to testify before a combined Senate Judiciary and Commerce committee hearing on Capitol Hill on April 10, 2018. A new Morning Consult poll found that 55 percent of adults said they believed Congress had “a lot” or “some” understanding of how to regulate the tech industry. (Chip Somodevilla/Getty Images)
By Sam Sabin

With the House antitrust subcommittee ready to pull out all the stops ahead of today’s hearing with the chief executives of Amazon.com Inc., Apple Inc., Alphabet Inc. and Facebook Inc., a new survey suggests that most of the public has little or no faith in Congress’ ability to regulate the tech industry.

More than half (55 percent) of the 2,200 adults surveyed in a Morning Consult poll conducted July 23-26 said they believe Congress had “a lot” or “some” understanding of how to regulate the technology industry, but they were 9 percentage points less likely, at 46 percent, to trust the lawmakers best to do so. Adults, regardless of party affiliation, were more likely to trust other government institutions, such as the court system (57 percent) and federal agencies (53 percent), to best regulate the sector.

The survey has a margin of error of 2 points. 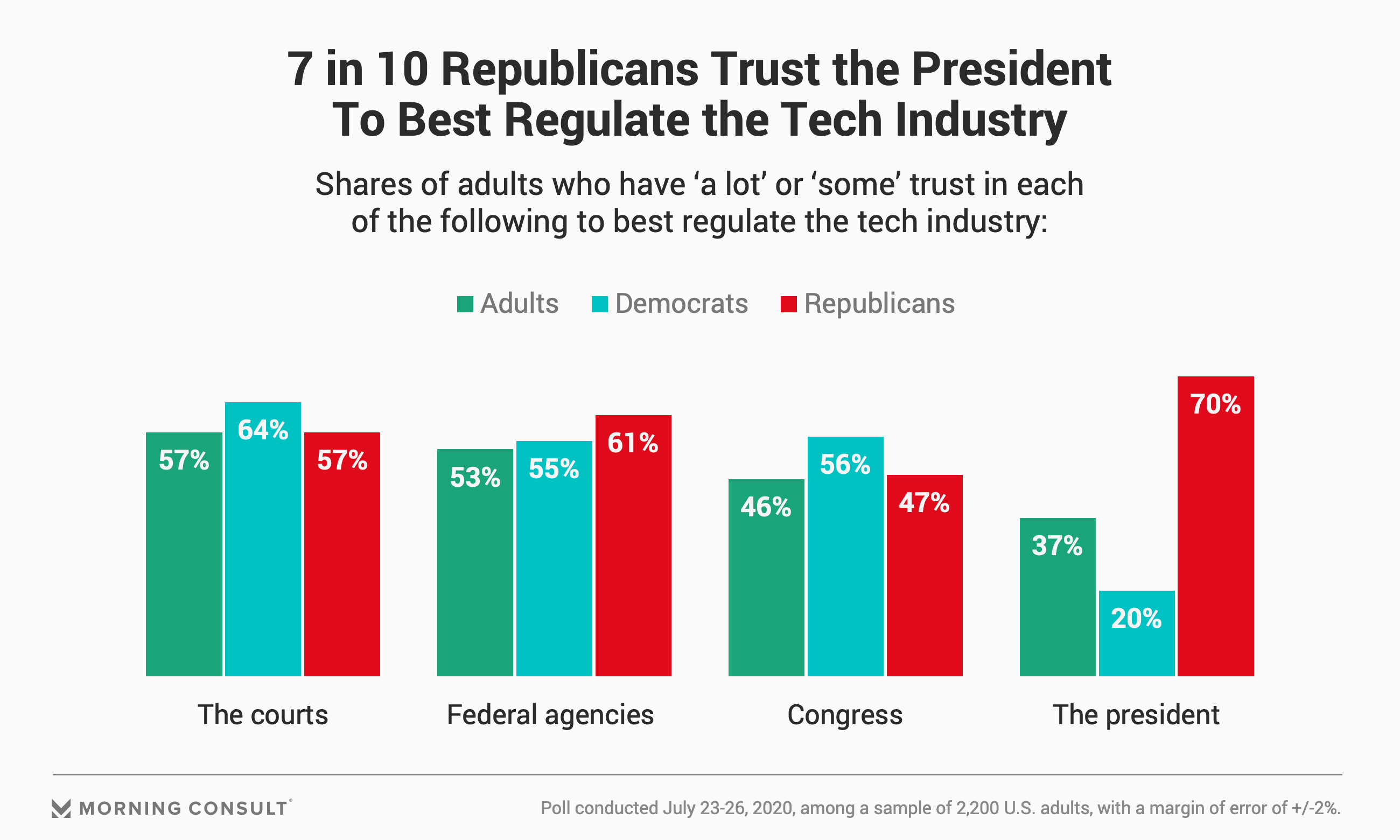 Both Democrats and Republicans saw a nearly 10-point discrepancy between whether they believed Congress had at least some understanding of how to regulate tech companies and whether they trusted federal lawmakers to best approach such regulation. Among Democrats, 64 percent said they believed Congress understood the issue, while 56 percent said they had trust in the legislative branch — an 8-point gap. Democrats were far more likely to trust members of their party (74 percent) and the courts (64 percent) with tech regulation than Capitol Hill.

And among Republicans, 56 percent said they believed Congress understood either “a lot” or “some” of the issues, but only 47 percent trusted them at least somewhat with doing so in the best way — a 9-point dip. They were more inclined to say they trusted the president (70 percent) and fellow Republicans (67 percent).

Related: Before Hearing With Big Tech CEOs, Lawmakers Lay Out Different Visions for Its Focus

Key members of the House Judiciary Committee will spend hours this afternoon seeking answers from the four tech executives — Jeff Bezos, Tim Cook, Sundar Pichai and Mark Zuckerberg — in response to a slew of allegations that their companies abuse their market power by making it harder for competitors to succeed in their respective industries. The hearing is expected to be the culmination of a nearly 14-month congressional investigation into the four tech giants, led by Rep. David Cicilline (D-R.I.), the antitrust subcommittee’s chairman. So far, the inquiry has yielded 1.3 million documents of evidence — some of which could be unveiled during the hearing, senior congressional aides told reporters last week. 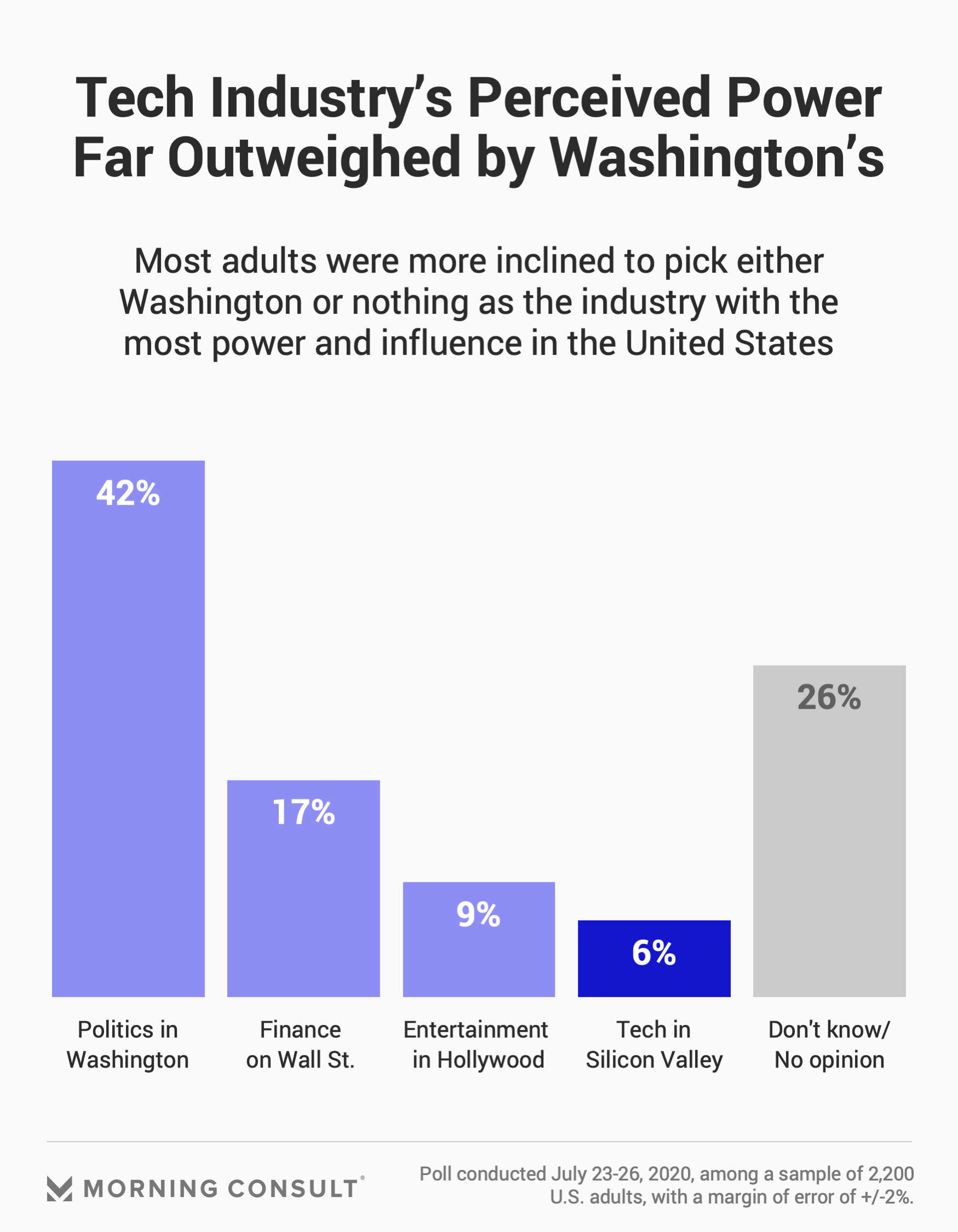 However, Congress has a history of failing to understand certain tech issues: When Google’s Pichai last appeared before a congressional panel in December 2018, Rep. Steve King (R-Iowa) complained about a notification that appeared on his granddaughter’s iPhone, a product made by Apple Inc.

Underscoring the panel’s investigation, however, is an American public with mixed views on tech regulation. A plurality of adults (35 percent) said they didn’t know or had no opinion on whether the federal government needs to regulate the tech industry more, less or exactly the same as it is doing currently. Thirty percent said the industry needs more regulation, while 24 percent said it was being regulated the right amount and 11 percent said the federal government should regulate it less.

And that sense of uncertainty goes hand-in-hand with how U.S. adults view the amount of power the tech industry has. When asked to choose which industry holds the most power and influence in America, technology in Silicon Valley ranked last: 6 percent picked tech, compared to 42 percent who chose politics in Washington. The share who picked the tech industry is statistically unchanged since the first time the question was asked in a February 2018 survey.