47% of suburban voters disapprove of DHS presence in the city, poll shows

The deployment of federal agents in Portland, Ore., earlier this month represents one part of President Donald Trump’s effort to establish himself as the law-and-order candidate in a bid to curry favor with suburban voters ahead of Election Day. But new polling shows that more of those Americans object to that government presence than approve of it, raising questions about the viability of the strategy.

Nearly half (47 percent) of suburban voters in a new Morning Consult/Politico survey disapproved of the staging of Department of Homeland Security officers in the City of Roses to help rein in demonstrators protesting police violence against Black people, compared with 42 percent who approved of it. The July 24-26 survey was conducted among 1,997 registered voters and 961 suburban voters, with respective margins of error of 2 and 3 percentage points. 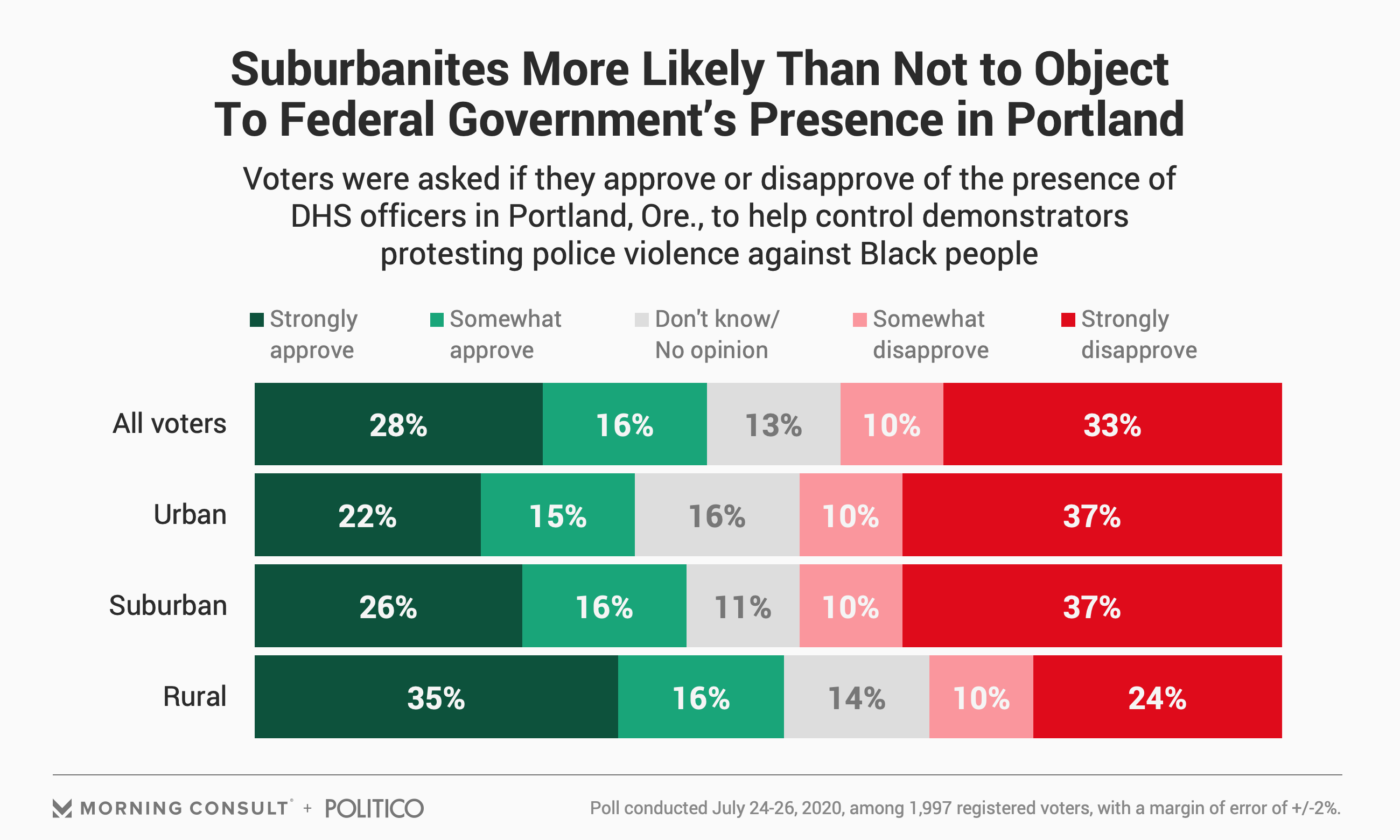 By an 11-point margin, suburbanites were also more likely to strongly disapprove of the DHS deployment than they were to strongly approve of it. Throughout the month, the presence of those officers, many of whom have donned military-type garb while patrolling the streets since the July 4 weekend, has resulted in a number of skirmishes with protesters that have ended up on national television and in newspapers across the country.

The latest poll found 49 percent of suburban voters — and 47 percent of all voters — said they’ve heard “a lot” about the DHS presence in Portland, placing the event comfortably in the top fifth of news items tracked by Morning Consult this year. That coverage appears to have left suburbanites with a negative impression: 49 percent said they believe DHS’ presence in Portland has increased unrest in the city, compared with 14 percent who said the opposite and 13 percent who said it had no impact.

The focus on law and order from the Trump campaign has grown more prevalent since the police killing of George Floyd in Minneapolis on Memorial Day, part of the cultural flames that the president has stoked along with his defense of Confederate flags and monuments. That cultural war, which strategists say is aimed at enticing suburban voters, appears to have fallen flat with the intended audience.

In surveys conducted May 29-31 among roughly 6,000 likely suburban voters nationwide, former Vice President Joe Biden led the president by 6 points, 48 percent to 42 percent. That edge had nearly doubled in surveys conducted July 21-23, which found Biden leading Trump by 10 points with the group, 50 percent to 40 percent.

Critics of the president’s strategy say it relies on a misguided, outdated assumption about the composition of the suburbs. The demographics show those critics have a point: Suburban voters are about as diverse as the broader electorate in terms of race or ethnicity, age, gender, education and income, according to Morning Consult data.