Dr. Anthony Fauci testifies at a June 30 Senate health committee hearing. The nation's top infectious disease expert is cautiously optimistic about the development of a coronavirus vaccine, and a new poll shows most voters support a slow-and-steady approach to make sure the treatment is safe. (Kevin Dietsch-Pool/Getty Images)
By Matt Bracken

The race to develop a coronavirus vaccine is accelerating this week, with Moderna Inc. and Pfizer Inc. launching phase 3 trials for their experimental candidates and Johnson & Johnson not far behind in delivering the first doses of its offering to human study participants.

But as drugmakers push to expedite the vaccine development process and health officials eye early 2021 for delivery to the public, a new Morning Consult/Politico poll shows that nearly two-thirds of U.S. voters do not want testing compromised for the sake of speed — even if that means pushing back the distribution of a vaccine. 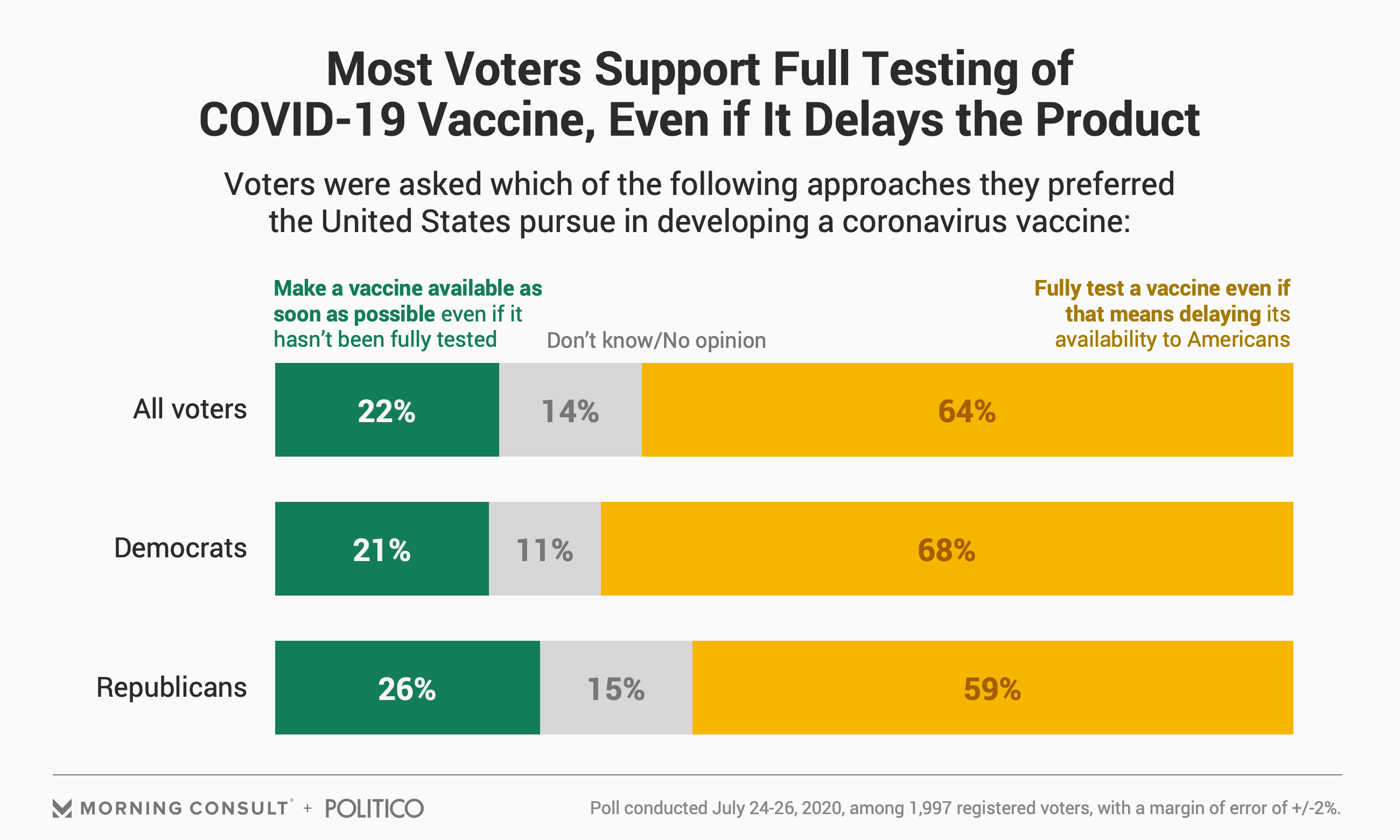 In the survey of 1,997 registered voters, 64 percent said the United States should prioritize fully testing a COVID-19 vaccine even if that means delaying making it available to Americans and the continued spread of the virus. Twenty-two percent of voters said the country should prioritize making a vaccine available as soon as possible, even if it hasn’t been fully tested, to control the coronavirus’s spread.

The poll was conducted July 24-26 and has a margin of error of 2 percentage points.

Majorities across all age brackets, income levels and geographic areas back the more cautious approach to vaccine development, with most levels of support exceeding 60 percent.

The trend also holds across voting blocs, though Democrats were 9 points more likely than Republicans to prioritize thorough testing over speedy vaccine deployment.

Dr. Anthony Fauci, director of the National Institute of Allergy and Infectious Diseases, said during a Q&A with The Washington Post last week that it is likely “we would have tens of millions of doses available” at the beginning of next year, though a potential vaccine would not be widely available to the American public until “several months” into 2021.

Whether pharmaceutical companies can stick to that timeline remains to be seen, though Fauci has said the progression to phase 3 so far has occurred in “record time.” And the Moderna vaccine specifically, which is being developed with the National Institutes of Health and has received $955 million in funding from the federal government, has the doctor feeling “cautiously optimistic” about its momentum.

Related: 2 in 3 Adults Ready to See Doctors for Non-COVID Treatment, but They’re More Split on Other Providers

Among Democrats, 34 percent said they’d be among the first Americans vaccinated, compared with 22 percent of Republicans who said the same. Meanwhile, 24 percent of GOP respondents said they would not take part in coronavirus vaccination, 15 points more than the share of Democrats who would also decline.

The survey also sought to test whether the source of the vaccine would influence Americans’ interest in seeking the treatment. While half of those surveyed were asked about a vaccine developed in the United States, the other half of respondents were queried about a treatment made in China. That caused affirmative answers to drop across the board.