In April, Half of the Public Had Worn a Face Mask in the Past Month. Now, That Number Is 95%

A new Morning Consult poll found that 95 percent of U.S. adults have worn a face mask to some extent over the past month, up from 88 percent in June and 50 percent in April. (Getty Images)
By Brian Yermal Jr.

As more states and businesses implement face mask requirements in an effort to reduce the spread of COVID-19, polling shows their efforts appear to be reaching the public at large. A July 23-26 Morning Consult survey found that 95 percent of adults have worn a face mask in the past month in public spaces such as grocery stores or parks, with 79 percent saying they “always” wore the coverings and 16 percent saying they wore them “sometimes.” The share of those at least occasionally wearing masks is up 7 percentage points from a poll conducted June 9-12, when 61 percent said they always wore a mask in public in the past month and 27 percent said they sometimes used them.

The June and July numbers show a significant increase in mask use since the earlier days of the coronavirus pandemic: In an April 7-9 survey, half of adults said they were using masks to some extent in the past month, with 26 percent saying they always wore them in public. The lower rate of face mask usage at the time can be attributed partly to the lack of mandates, supply shortages and guidance from U.S. and global health officials that stated masks should be reserved for health care workers and those infected with COVID-19.

The share of adults who haven’t worn masks has also shrunk over time, from 50 percent in April to 12 percent in June and just 4 percent in the latest survey.

Each survey was conducted among 2,200 U.S. adults and has a margin of error of 2 points.

Related: Nearly 3 in 4 Voters Support State Face Mask Mandate With Penalties for Those Who Don’t Comply

As the coronavirus case count has increased in recent weeks, so has the number of states and businesses that have issued rules to make wearing face masks mandatory. Over half of U.S. states now have some form of a face-mask mandate in place, and businesses of all sizes — from mom-and-pop stores to Walmart Inc. and Target Inc. —  are requiring customers to don face coverings in their buildings. And although he stopped short of issuing a federal mandate, President Donald Trump recently recommended that Americans wear face masks in public, despite his own resistance to using them publicly during the first few months of the pandemic.

The latest survey indicates Trump’s endorsement of face masks may have convinced more Republicans, who have been slightly less likely than Democrats to use them throughout the pandemic, to embrace the measure. 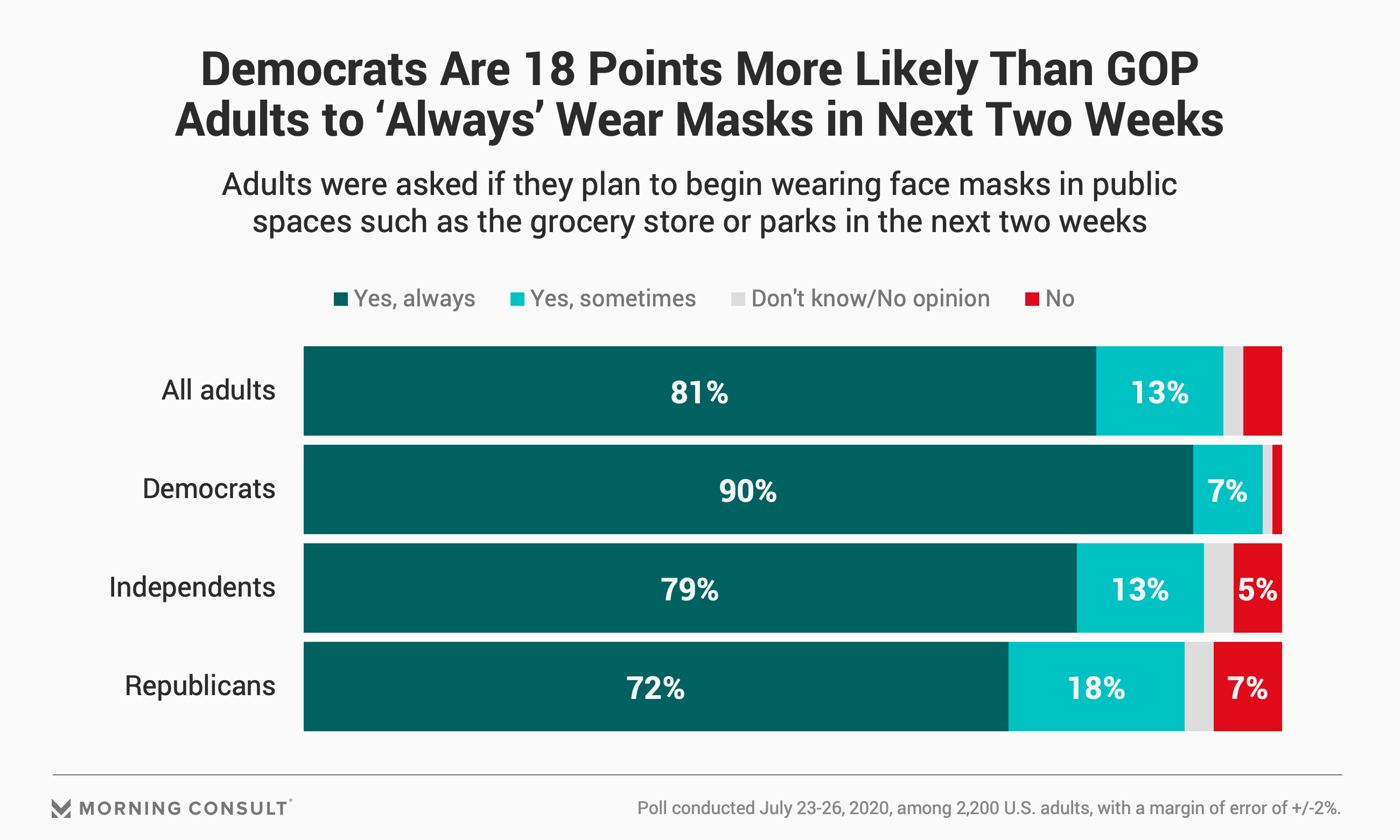 Ninety-four percent of adults said they plan to wear a face mask to some extent in public in the next two weeks, including at least 9 in 10 Democrats (97 percent), independents (92 percent) and Republicans (90 percent).