Research commissioned by a coalition of leading energy companies and major corporations has found that taxing carbon could reduce emissions by 57 percent by 2035 compared with 2005, when the United States hit its peak of just below 6,000 million tonnes of carbon dioxide.

The Climate Leadership Council, which includes the largest energy companies in the United States, plans to share the report with congressional lawmakers on both sides of the aisle, according to vice president of communications Carlton Carroll. The group commissioned the report from Thunder Said Energy, a research consultancy focused on energy transition technologies, which models the impact of a carbon price in the United States.

“The most effective antidote to externalities is to tax them,” the study states. “Perhaps the greatest advantage of a CO2 price is to create a level playing field for different decarbonization technologies to compete. Thus, the most economic technologies can gain traction.”

The Climate Leadership Council is a bipartisan and international policy institute that lobbies for a carbon tax as “the most cost-effective, equitable and politically-viable climate solution,” advocating to return the income from carbon fees to citizens through carbon dividends. The group’s founding corporate members include Royal Dutch Shell PLC, ExxonMobil Corp., BP PLC, and several other major energy companies. Its nongovernmental organization founding partners are Conservation International, the World Resources Institute and the World Wildlife Fund.

The new report examines the consequences of taxing carbon at $43 per ton starting in 2021 — roughly what the CLC first proposed in 2017 — and increasing it by 5 percent above inflation annually, to $112 by 2035.

According to the study, the United States could reduce its emissions by 57 percent by 2035 (versus 2005 levels) purely through the effects of that carbon tax, which is tied largely to the projected demise of coal and smaller reductions in oil use. 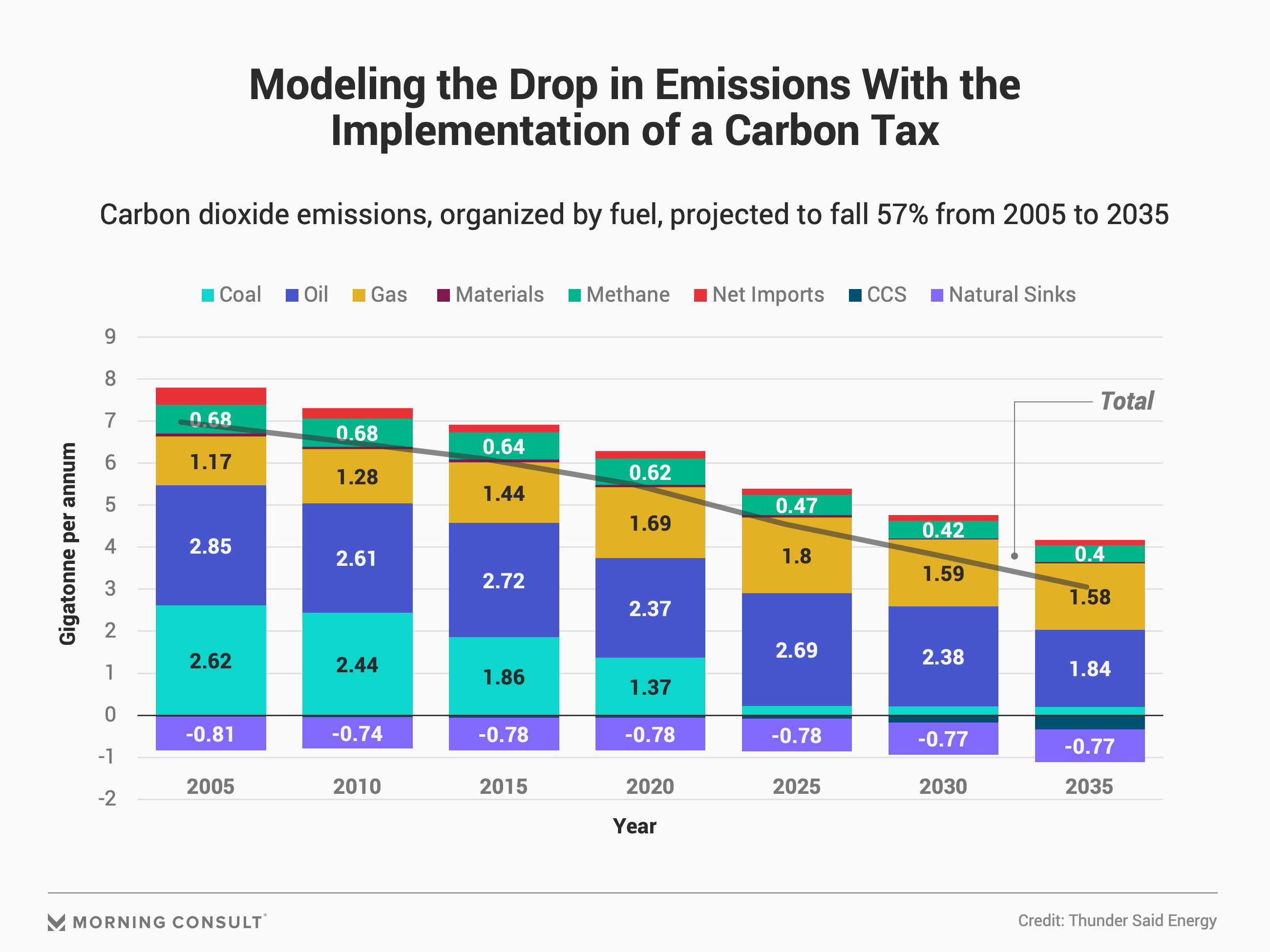 The model also projects the growth in renewables to 30 percent of the gross grid and increases in battery storage and carbon capture and storage. The use of natural gas would remain relatively stable in comparison, though there would be a major reduction in gas flaring; the report calls capturing flare gas “one of the largest industrial efficiency opportunities.” And by increasing the carbon price to $90 per ton, gas flaring could potentially be eliminated entirely.

The report concludes that final energy consumption would be 13 percent lower in 2035 compared with 2019, at 9,650 tera-watt hours of useful energy. And this would come alongside major economic impacts, such as $1.4 trillion of new capital investment over the next 15 years. The immediate surge in new investment is projected to peak in 2023 with $95 billion in annual investment and the creation of 195,000 new jobs.

And the pace of industrial efficiency gains could double from the historical rate of 1 percent per year, with the most efficient manufacturers gaining a competitive advantage overnight.

While 2019 saw the introduction of more than one carbon tax bill at the federal level, none have progressed past the committee stage. And while presumptive Democratic presidential candidate Joe Biden said he would support a carbon tax during the primaries, his most recent clean energy plan makes no mention of the policy option, focusing instead on tax credits and incentives for renewables growth.