As Trump Suggests Postponing the Election, Polling Shows the Idea Is Even Less Popular Than It Was Months Ago

Most still back mail-in voting amid the pandemic, but preference for an in-person election has grown

A women is helped by an election worker to put her ballot in a box while voting from her car in a parking lot on June 30, 2020 in Provo, Utah, where mail-in ballots and drive-up voting have replaced in-person voting this election. While support for mail-in voting has remained stable since April, voters are now 15 points more likely to back in-person voting for the presidential election. (Photo by George Frey/Getty Images)
By Eli Yokley

President Donald Trump’s suggestion that the 2020 election be delayed has been met by a decline in already meager public backing for the idea, according to a new Morning Consult/Politico poll, but his critiques of mail-in voting appear to be resonating with Republican voters.

Just 7 percent of voters in the July 31-Aug. 2 survey said the November contest should be delayed, down 9 percentage points from a similar poll conducted in April, while the share who said it should be held on time and mostly in person increased 15 points, to 34 percent. A slim majority (52 percent) said the general election should be held on schedule and that most Americans should vote by mail due to the coronavirus pandemic, statistically unchanged from the poll conducted as the public’s concern about the coronavirus pandemic was peaking. 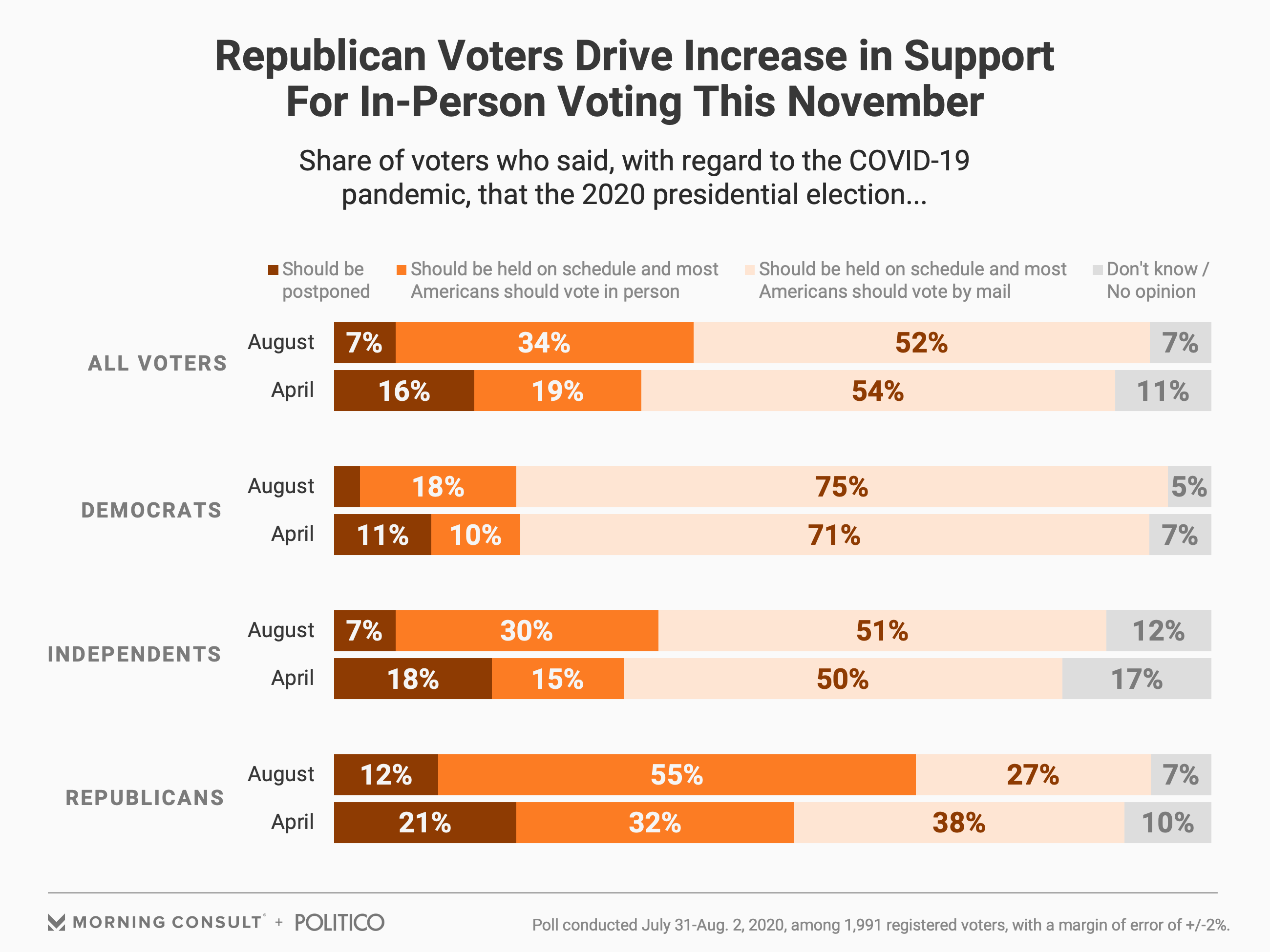 While the drop in preference for postponing the November election and the increase in backing for an in-person contest was reflected among Democrats and independents, the latter was most significant among Republican voters, indicating that months of messaging from the president against mail-in voting are making an impression. More than half of Republicans (55 percent) now say that the election should be held on schedule and most voters should vote in person, up 23 points since April.

In responses to another question that did not include the option of postponing the election, 58 percent of voters, including 81 percent of Democrats and a third of Republicans, said the United States should allow all voters to cast ballots by mail “to minimize the spread of the coronavirus.” Thirty-one percent, driven by 57 percent of Republicans, said the country should not allow all citizens to participate via mail-in elections this year “because it jeopardizes election security.”

The survey of 1,991 registered voters, which has a 2-point margin of error, was conducted after Trump suggested on Twitter that  the 2020 election should be delayed due to his concerns with “Universal Mail-In Voting,” a less-restrictive alternative to casting absentee ballots by mail. The tweet, posted on July 30 shortly after the Commerce Department reported that April to June brought the biggest-ever quarterly drop in economic activity since it began tracking the statistic in 1947, was viewed by some as a diversion from the dismal economic news.

If the purpose of the tweet was to overshadow the Commerce Department report, it appears to have been moderately successful. 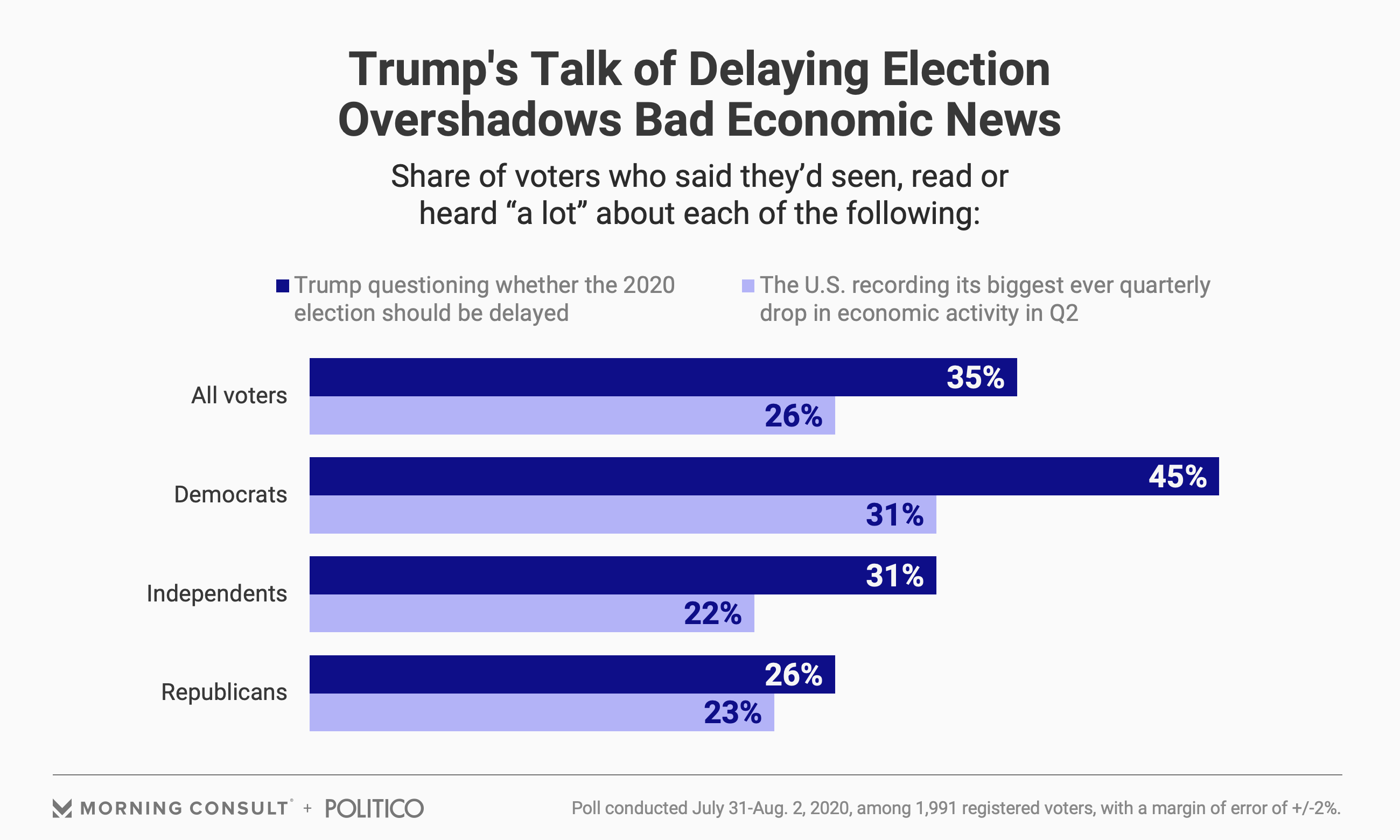 Voters were 9 points more likely to say they’d seen, read or heard “a lot” about Trump’s election suggestion than the economic news, 35 percent to 26 percent. Among Democrats, the gap was even wider — 45 percent to 31 percent — while roughly a quarter of Republicans said they’d heard about either story.

The allegation that Trump was trying to distract voters was based in part on the fact that the president has no unilateral authority to delay the November election — and the survey shows almost all voters know it. Only 11 percent — including 10 percent of independents and 17 percent of Republicans — wrongly said that Trump has the ability to postpone the November 2020 election. Half correctly said the power lies with Congress, where a bipartisan mix of lawmakers have shot down the idea of changing the law.

Roughly a third of voters said they were “very concerned” that the 2020 presidential election would be postponed due to the pandemic, about the same share as in April, while the share who said they were very concerned about in-person voting during the pandemic fell 10 points to 30 percent, matching the drop in concern from those over the age of 65, who are more vulnerable to a serious COVID-19 case.

Compared to those two issues, more voters have concerns about the sanctity of postal polling.

Thirty-eight percent — including a majority of Republican voters and a quarter of Democrats — said they were “very concerned” about tampering with mail-in ballots, fears that have been stoked by Republican opponents but that local elections officials have said is very rare. The figure is similar to where it was at the end of May.

For comparison, 31 percent said they were very concerned about Russia trying to influence the 2020 presidential election — something that’s already been seen in social media activity from the Kremlin-backed Internet Research Agency, per a Brennan Center for Justice analysis.