With the expiration of $600 per week unemployment insurance benefits, 5.4 million Americans will struggle to pay their bills by the end of this month, Morning Consult economist John Leer writes. 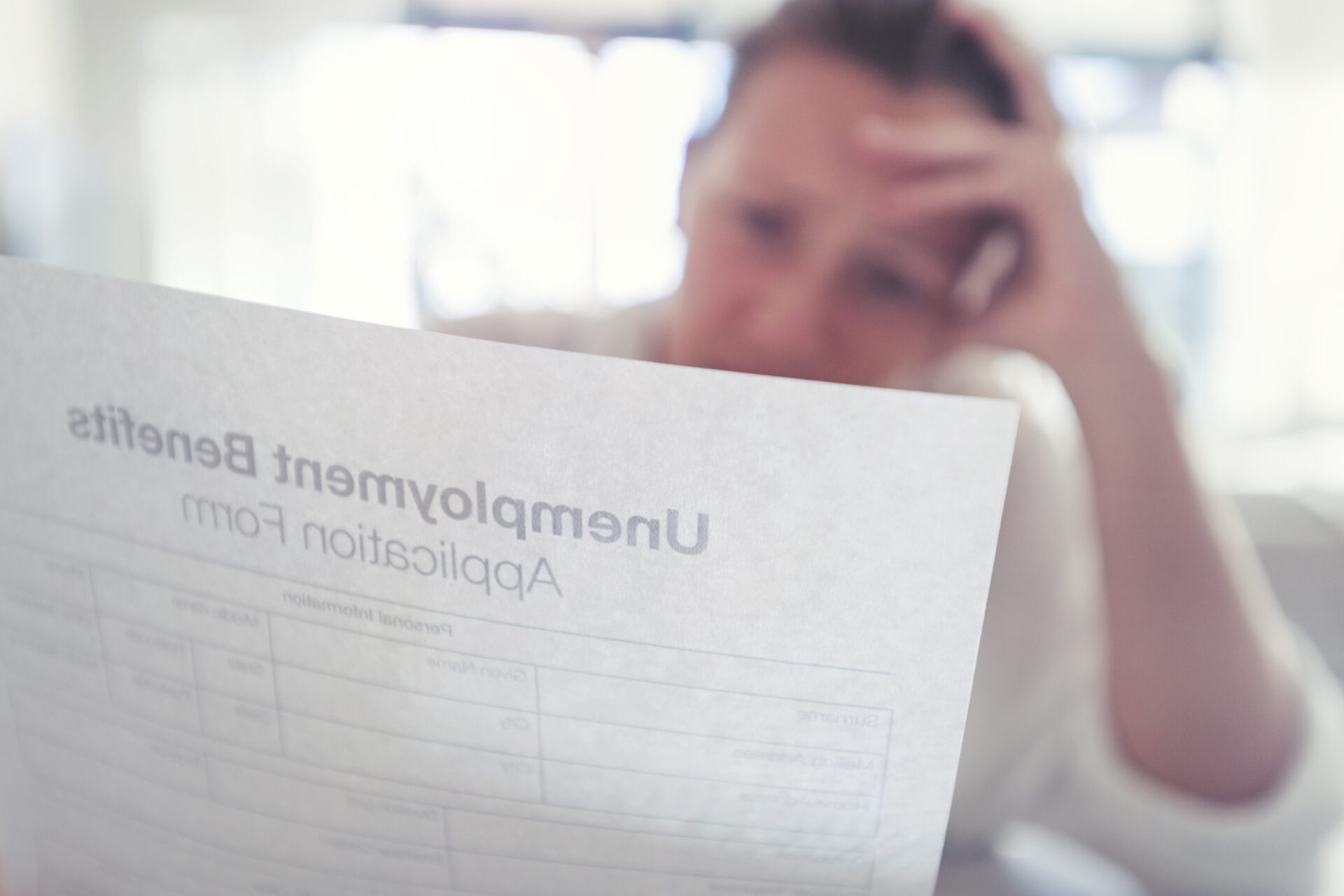 A Morning Consult survey conducted July 23-25 found that 29 percent of unemployed and furloughed workers lacked adequate savings to pay for their basic living expenses for the month, up from 16 percent in June. (Getty Images)
By John Leer

Five days after the Federal Pandemic Unemployment Compensation Program (FPUC) officially ended, Congress and the White House remain at an impasse on agreeing to new terms to provide additional financial support to unemployed workers. Along with the expiration of the $600 weekly Pandemic Unemployment Compensation Payment (PUCP), some of the relief to renters and borrowers also ended on July 31. The question facing policymakers and businesses is, how will the expiration of the PUCP affect the U.S. economy?

The findings in this analysis are based on three separate Morning Consult surveys using similar questions to produce monthly trends. The first survey was conducted May 19-21, the second June 16-18 and the third July 23-25. All three surveys relied on a representative sample of 2,200 U.S. adults, weighted to match age, gender, educational attainment and region. Each of the surveys’ margins of error is 2 percentage points.

The first significant finding from this analysis is that without additional funding, millions of unemployed Americans are at risk of financial insolvency by the end of August. The personal finances of workers who have been laid off or placed on temporary leave since the onset of the pandemic deteriorated in July. The July survey found that 29 percent of unemployed and furloughed workers lacked adequate savings to pay for their basic living expenses for the month, up from 16 percent in June. This monthly change contrasts with June, when the finances of laid off and furloughed workers improved. At that point in time, many renters and homeowners took advantage of the rent deferral and mortgage forbearance options included in the CARES Act, thereby driving down their monthly expenses. 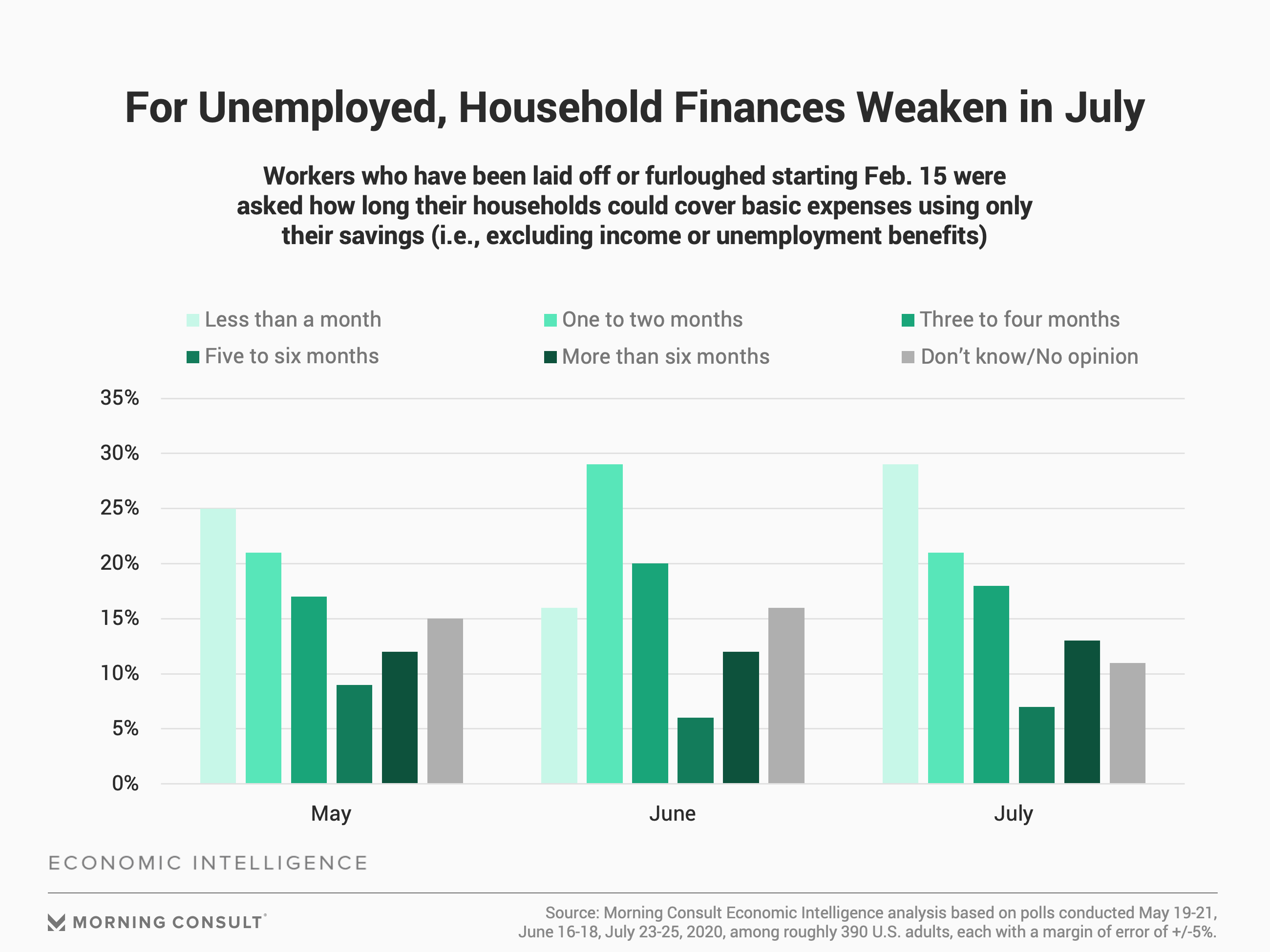 Without income from work or unemployment insurance, 5.4 million unemployed Americans (29 percent of 18.5 million UI recipients) will run out of money to pay for things like rent, auto payments, credit cards, health insurance, food and clothing by the end of this month, and 9.2 million Americans will face the same fate by the end of September. These numbers are on top of the millions of Americans already unable to pay their expenses.

The near-term economic situation is not quite as dire since most workers will continue receiving their standard weekly unemployment insurance payments through Dec. 31. However, for many UI recipients, the standard payments do not cover basic expenses, meaning that they have to tap into their modest savings.

After subtracting $600 received per week and converting the weekly values to monthly values, monthly unemployment benefits range from less than $800 per month to over $1,600.

Forty-four percent of UI recipients are set to receive less than $800 per month. However, Americans’ expenses are more rigid and unable to rapidly adapt to the changes in the UI benefits. Seventy-five percent of laid off and furloughed workers spend $750 or more per month on basic expenses. This group is particularly at risk of financial insolvency.

Assuming an equal distribution of monthly expenses across UI recipients — a strong assumption since higher-income Americans tend to receive more in UI benefits and have higher monthly expenses — then 33 percent of UI recipients, or 6.1 million Americans, will have to draw on their savings in August to cover their basic expenses. As each month passes, it will become increasingly difficult for unemployed workers to use their savings to cover the shortfall in their finances. 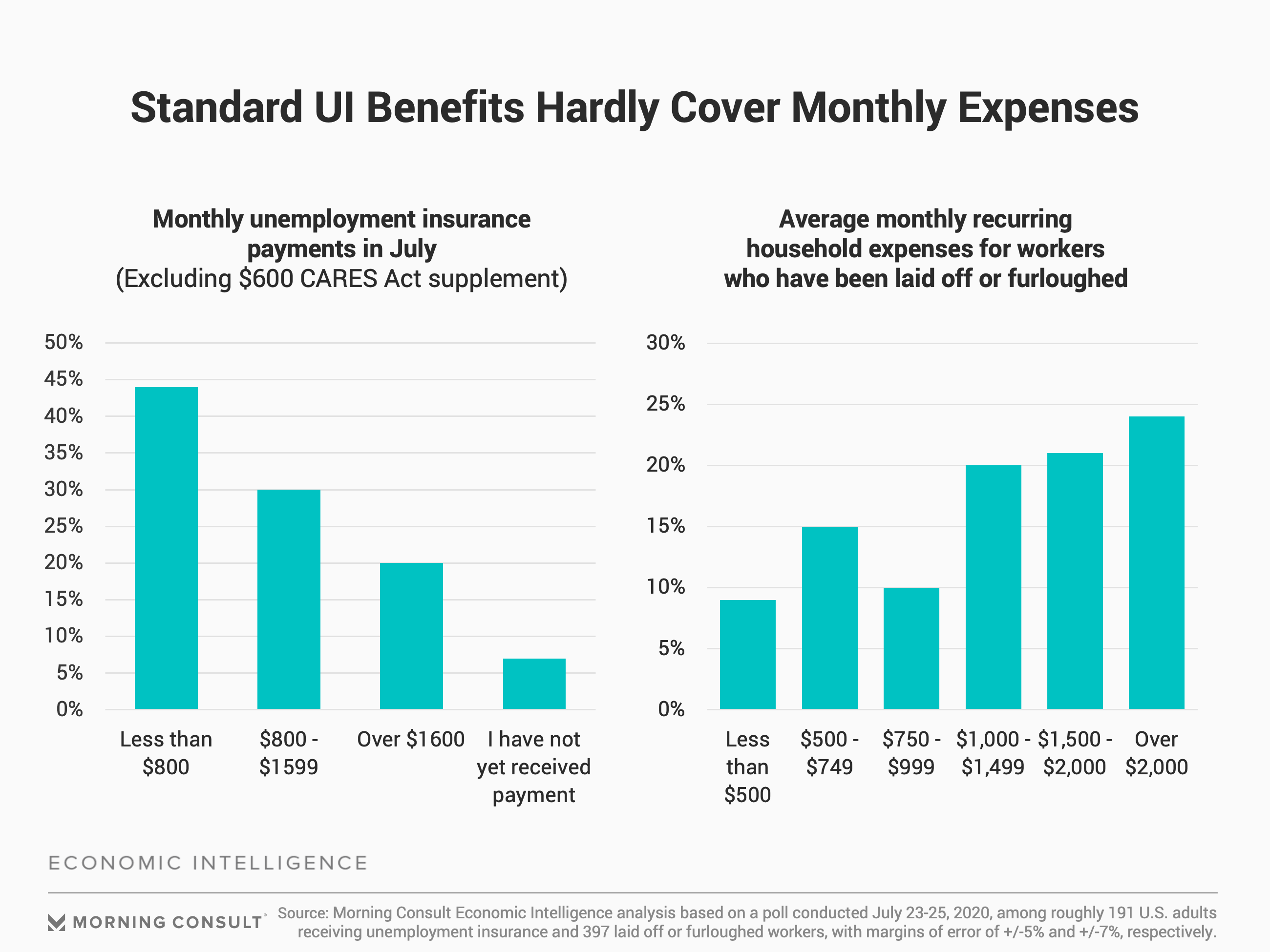 One piece of positive news is that roughly 12 percent of UI recipients did not receive the additional $600 per week in July. This money is owed to them and should be disbursed in the coming weeks, thereby offsetting some of the blow to the economy from the expiration of the payments.

However, it is also important to emphasize that layoffs have not stopped. As the virus spreads and employers shrink their workforces, more Americans will become unemployed. This analysis does not address the finances of those likely to suffer a loss of employment in the coming weeks, but household finances are likely to meaningfully weaken as more workers lose their jobs.

Finally, as has been argued by some, it is possible that the expiration of the PUC payments will have a positive impact on the labor force by creating a greater incentive for unemployed workers to find work. According to this argument, the PUC payments combined with the standard weekly state UI payments were so large that unemployed workers lacked the incentive to look for work. Consequently, businesses have been unable to hire workers because they prefer receiving unemployment benefits to working.

The results of this study do not corroborate that argument. To the contrary, this data provides little evidence that UI benefits distorted workers’ incentives. In July, 62 percent of UI recipients said that the value of their UI benefits were equal to or greater than what they made while working, up from 46 percent in May. This finding is broadly consistent with a University of Chicago study from May that found 68 percent of unemployed workers eligible for UI would receive benefits that exceed lost earnings.

One of the biggest differences between those findings and the new Morning Consult study is that the University of Chicago researchers examine hypothetical UI payments, whereas this analysis focuses on actual payments received by unemployed workers. Due to processing errors and delays, actual payments received are systematically less than the total amount of eligible payments. From the perspective of unemployed workers, actual payments — as opposed to hypothetical future payments — are the operative values for determining the effects on workers’ incentives. 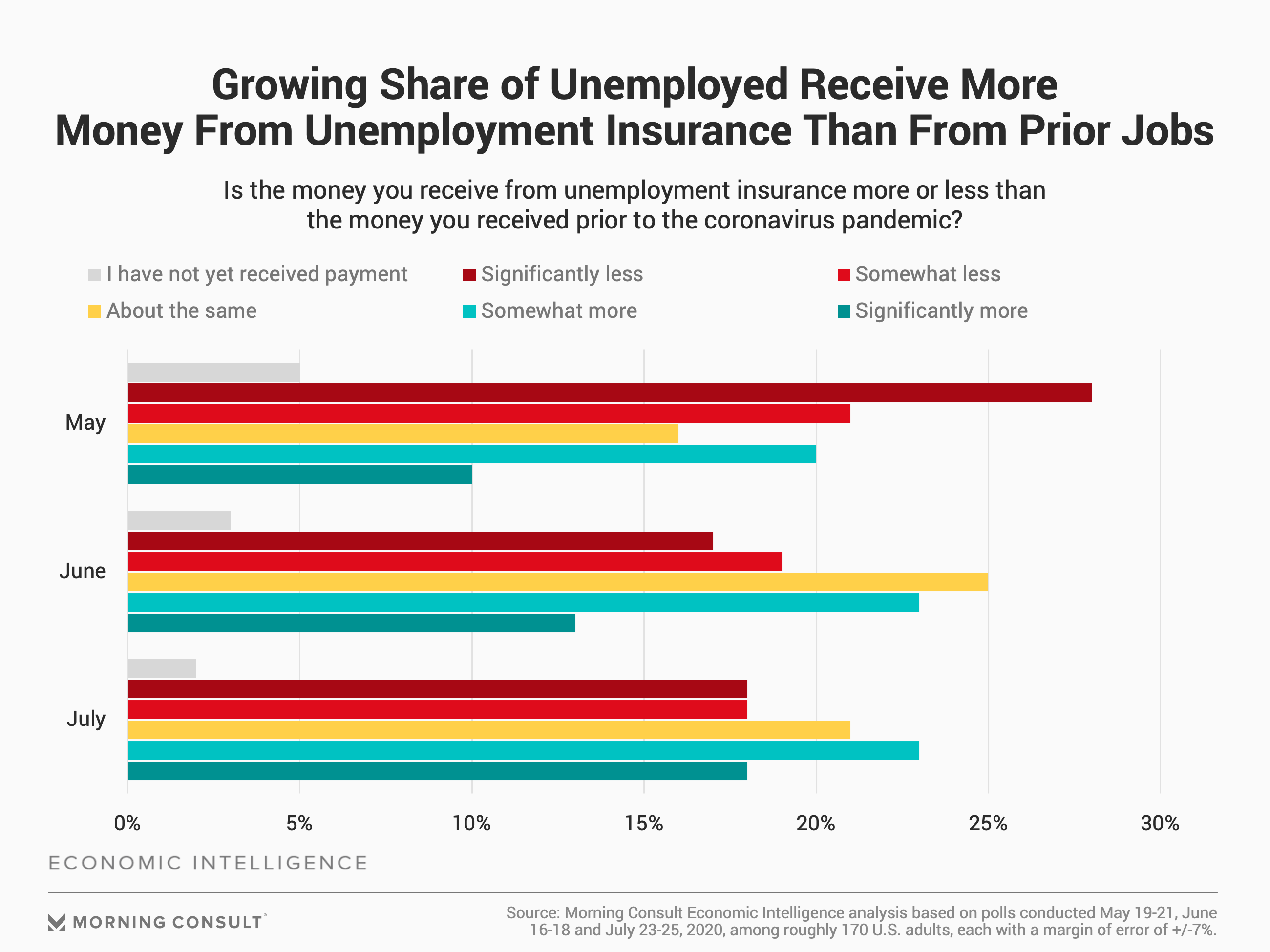 Furthermore, there is no statistically significant difference between people who were and were not earning more from UI benefits. In July, 51 percent of those who returned to work or started a new job were making more money from unemployment insurance than they were from their job prior to the onset of the pandemic, compared to only 29 percent who were making less. In June, it was 31 percent compared to 38 percent. This data is consistent with the central finding from researchers at Yale University, who also reported that the expansion of UI benefits has not materially affected the likelihood of the unemployed returning to work.

In summary, many workers were being paid more from UI than they were from working, but these seemingly “disincentivized workers” did not reenter the job market at a lower rate than those being paid less on UI than they were at their prior jobs. Consequently, it is unlikely the decrease in UI benefit payments in August will drive an increase in employment. Other factors such as the demand for labor and the safety and security of working conditions are the primary determinants of unemployment now.

Given the close relationship between the spread of the virus and consumer demand, unemployment is likely to remain at historically elevated levels in the coming weeks, and that development is more material for the employment outlook than alleviating perceived distortions in workers’ incentives.