Biden Doesn’t Repel Voters Like Clinton Did in 2016, and That’s a Problem for Trump

President Donald Trump’s re-election campaign lacks an advantage that helped propel him to the White House in 2016: The president’s presumptive 2020 rival, former Vice President Joe Biden, just isn’t as loathed by voters as his opponent was four years ago.

A recent Morning Consult/Politico poll found 35 percent of voters view Biden very unfavorably, compared with 43 percent who said the same of Democrat Hillary Clinton in August 2016. The starkest difference in views — a gap of 20 percentage points — came among independents: 31 percent said they had a “very unfavorable” view of Biden, while 51 percent viewed Clinton very unfavorably around the same time four years ago. 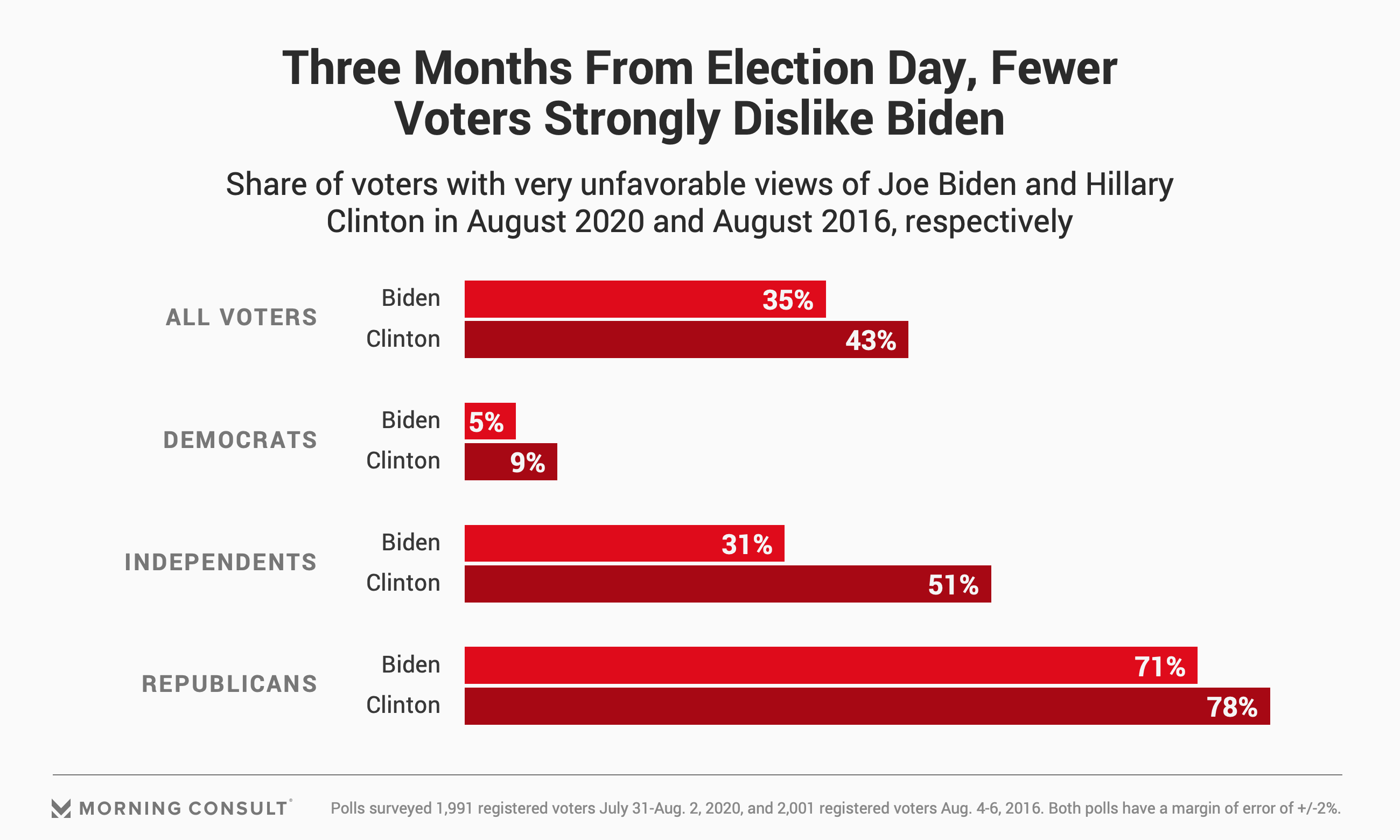 “Biden’s ability to maintain generally favorable ratings among independents thus far in the cycle therefore spells trouble for Trump and explains a lot of Biden’s polling success,” said Eric Ostermeier, a research fellow at the University of Minnesota’s Humphrey School of Public Affairs. “While there is still plenty of time for Trump’s messaging to partially deflate Biden’s numbers, at this stage of the campaign Biden’s modest advantage – among an electorate with seemingly fewer and fewer persuadable voters each cycle – seems golden.”

A dramatic shift in sentiment about Biden would be a change from the 2016 race, where Morning Consult’s polling found that despite a volatile, exceptionally nasty campaign, views about both Trump and Clinton were essentially unchanged from August to Election Day. That precedent raises questions about just how much the Trump campaign can do to alter perceptions of the president’s well-known presumptive 2020 opponent before November.

Aside from two brief dips — first as he struggled to disappointing Democratic primary finishes in Iowa, New Hampshire and Nevada, and then as an allegation of sexual assault from Tara Reade, his former Senate staffer, dominated the headlines — views on Biden have been fairly stable. That’s especially been the case throughout the summer, according to Morning Consult’s daily tracking of likely voters: 49 percent of likely voters polled Aug. 7-9 view Biden unfavorably, compared with 47 percent who said the same in surveys conducted May 3-5, and his favorability rating of 48 percent is unchanged over that time frame. By comparison, 42 percent of likely voters have a favorable view of Trump and 56 percent have unfavorable views.

Biden also leads Trump in a general election matchup, 51 percent to 43 percent, according to the latest poll. Among independents, Biden leads Trump by 10 points, 46 percent to 36 percent. The poll surveyed 11,968 likely voters and has a 1-point margin of error. 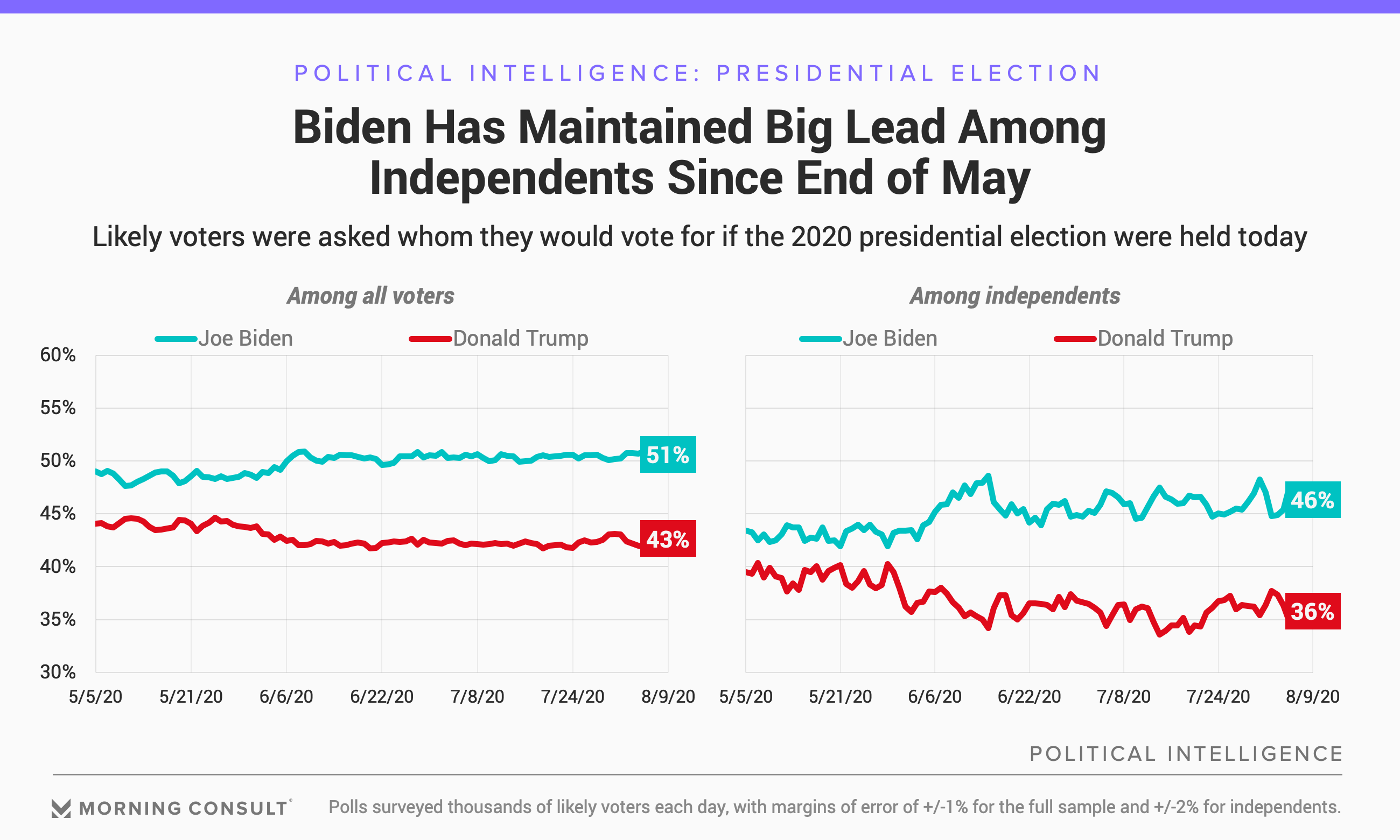 “A Trump comeback is likely predicated, at least in part, by driving up Biden’s unfavorables and by Biden suffering from more attention in the fall than he has received thus far,” said Kyle Kondik, managing editor of Sabato’s Crystal Ball at the University of Virginia Center for Politics. “It does not seem like the Trump campaign has found the right formula to really hurt Biden – but they still have time to try to figure that out.”

But Doug Heye, a Republican strategist and former spokesman for the Republican National Committee, expressed doubt in the Trump campaign’s ability to make voters feel as bitter about Biden, a man with a largely positive reputation in Washington, as they were toward Clinton, a woman who faced decades of negative attacks from the right and fierce media scrutiny.

“That may be too tall of a mountain to climb, especially when the candidate is making these over-the-top attacks,” he said.

While the president has unleashed a storm of critiques of the former vice president — on Aug. 6, he went as far as to accuse Biden of being “against God” — the Trump campaign has largely focused its attacks on Biden’s age and his competence, paired with the allegation that the 77-year-old is operating under the thumb of some of the left’s more progressive figures, such as Sens. Bernie Sanders (I-Vt.) and Elizabeth Warren (D-Mass.) and Rep. Alexandria Ocasio-Cortez (D-N.Y.).

Sources close to the Trump campaign said its messaging is aimed at revving up the Republican base and chipping away at Biden’s advantage with independents.

The ideological pitch could resonate with some Americans. As the Biden campaign signed onto a “unity” platform with Sanders, Morning Consult polling in July found voters placing Biden further left on an ideological scale than they had months earlier amid the heat of the primary campaign. 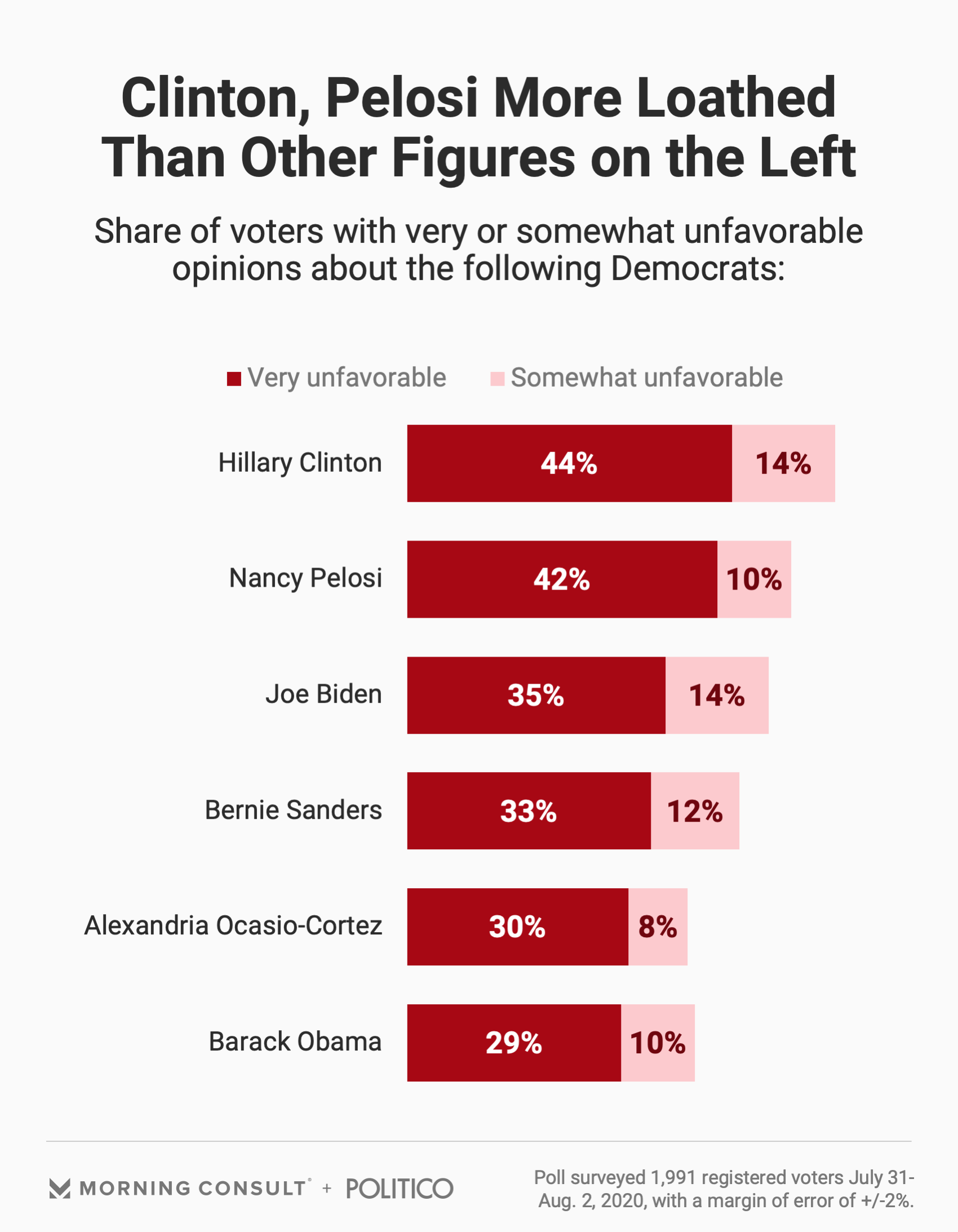 A Trump campaign commercial released last week highlights Biden’s unity agreement with Sanders, displaying a photo of Sanders, Ocasio-Cortez and Rep. Ilhan Omar (D-Minn.), another progressive, and saying that the “radical left has taken over Joe Biden and the Democratic Party.” Polling shows Sanders and Ocasio-Cortez draw negative views from Republicans, but the latter isn’t well-known, and the party’s comparatively moderate figures — Clinton and House Speaker Nancy Pelosi — generate the most vehement antipathy from Republicans, independents and the broader electorate.

Trump campaign spokesman Ken Farnaso told Morning Consult that “Biden is running on a nearly five-decade-long tenure in Washington that’s mired in controversy and failed socialist policies,” and that “voters juxtaposing President Trump and Joe Biden can see the stark difference in mental acuity, wit and ability to deliver results for the American people.” Biden’s campaign did not respond to a request for comment.

The “closet socialist” attack on Biden lacks bite given the dynamics of the primary, when Biden drew a strong contrast with Sanders, a self-described democratic socialist, said Rachel Bitecofer, a senior fellow at the Niskanen Center. And with concerns squarely focused on the coronavirus pandemic and the related economic downturn, she added, the president’s response to the crises — both in terms of policy and personality — may be distracting voters from fears about a leftward drift.

Trump has failed to take on the role as “consoler in chief,” she said, giving Biden the opportunity to protect voter sentiment about him in comparison to the president and frame himself as the compassionate leader that the country needs.

One source close to the Biden campaign said that it’s that message — which has featured prominently in the campaign’s paid advertising along with nods to his experience — that resonates most deeply with voters. To that point, Morning Consult/Politico polling shows voters favor Biden over Trump by double digits when asked whom they trust more to handle leadership in a crisis, contain the spread of the coronavirus and unite the country.