How Kamala Harris’ VP Candidacy Could Affect the November Contest

Harris, who appeals to moderates, could help energize Black voters

Sen. Kamala Harris of California hugs former Vice President Joe Biden after introducing him at a campaign rally in Detroit on March 9. Harris, who was just announced as Biden's running mate, is among the most well-known of the women who were rumored to be in the running. (Scott Olson/Getty Images)
By Eli Yokley

Vice President Joe Biden has chosen California Sen. Kamala Harris as his running mate, moving to elevate a Black and Asian American woman to a major party’s presidential ticket for the first time in American history.

In a tweet, Biden called Harris a “fearless fighter for the little guy, and one of the country’s finest public servants,” and lauded her tenure as California’s attorney general.

“I watched as they took on the big banks, lifted up working people, and protected women and kids from abuse. I was proud then — and I’m proud now — to have her as my partner in this campaign,” he said.

Related: Biden Doesn’t Repel Voters Like Clinton Did in 2016, and That’s a Problem for Trump 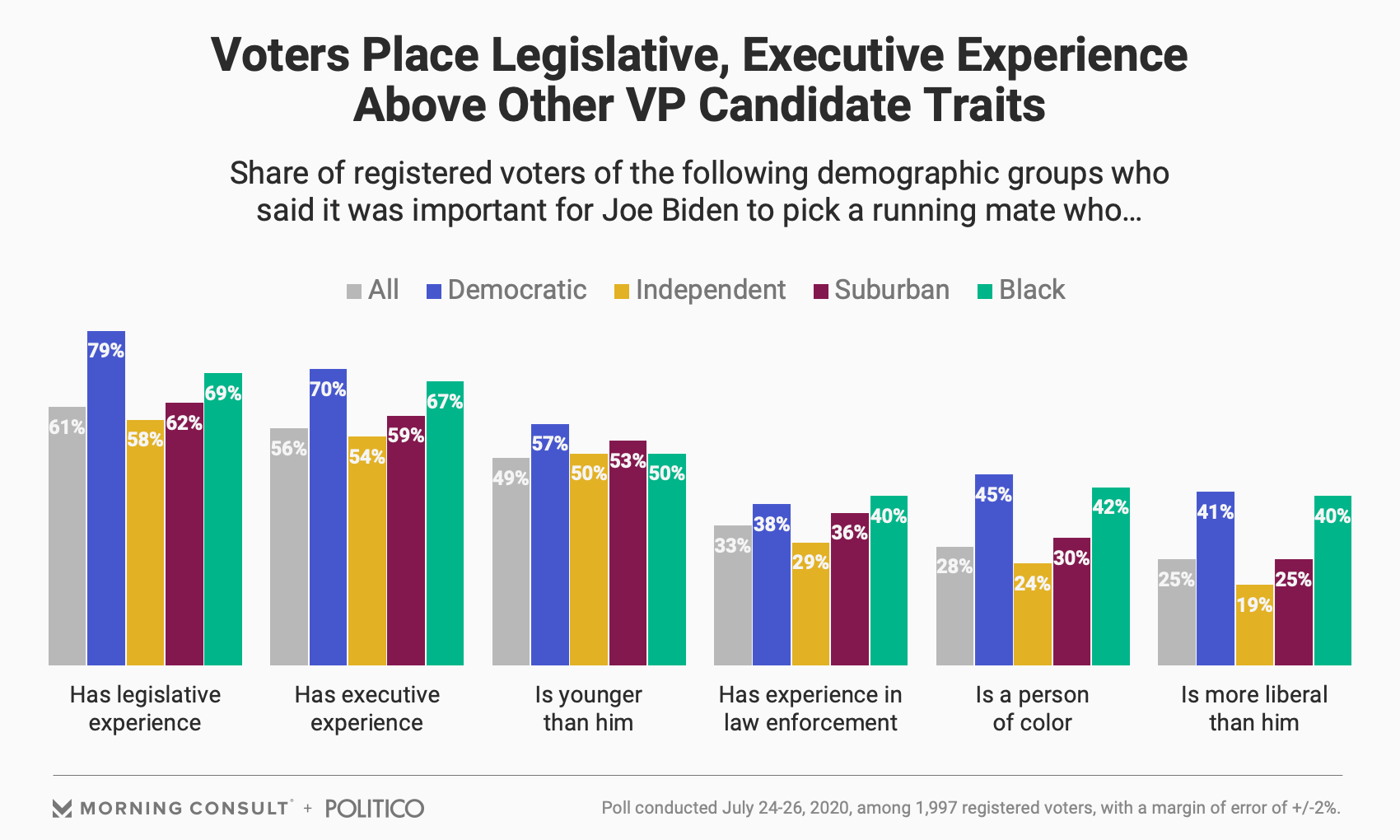 Harris is relatively well-known to the voting public following her Democratic presidential campaign, where she made waves in debates by pressing Biden on his record on racial issues even before Black Lives Matter demonstrations a year later would push them to the forefront in the race against President Donald Trump.

Her elevation could help energize Black voters, a constituency which propelled Biden to the Democratic nomination and, in 2016, turned out at lower rates for the first time in 20 years.

More than a quarter of voters said it was important for Biden to pick a person of color as his running mate, according to a recent Morning Consult/Politico survey, up 6 percentage points since a poll conducted more than a month before the protests. The increase was driven by liberal voters (36 percent to 46 percent), while the share of Black voters who deemed it important (42 percent) was statistically unchanged. However, 25 percent of Black voters said in the July 24-26 survey that it was “very important” that Biden pick a person of color, more than any other demographic tested.

Harris, a first-term senator and former California attorney general, brings law enforcement experience to the table — a quality prioritized by a third of voters, and valued by roughly 2 in 5 Black voters, self-described moderates and those ages 65 or older.

At 55 years old, Harris is two decades younger than Biden, a quality sought after by half of voters for the running mate of a presumptive presidential nominee who will turn 78 roughly two weeks after the Nov. 3 election. 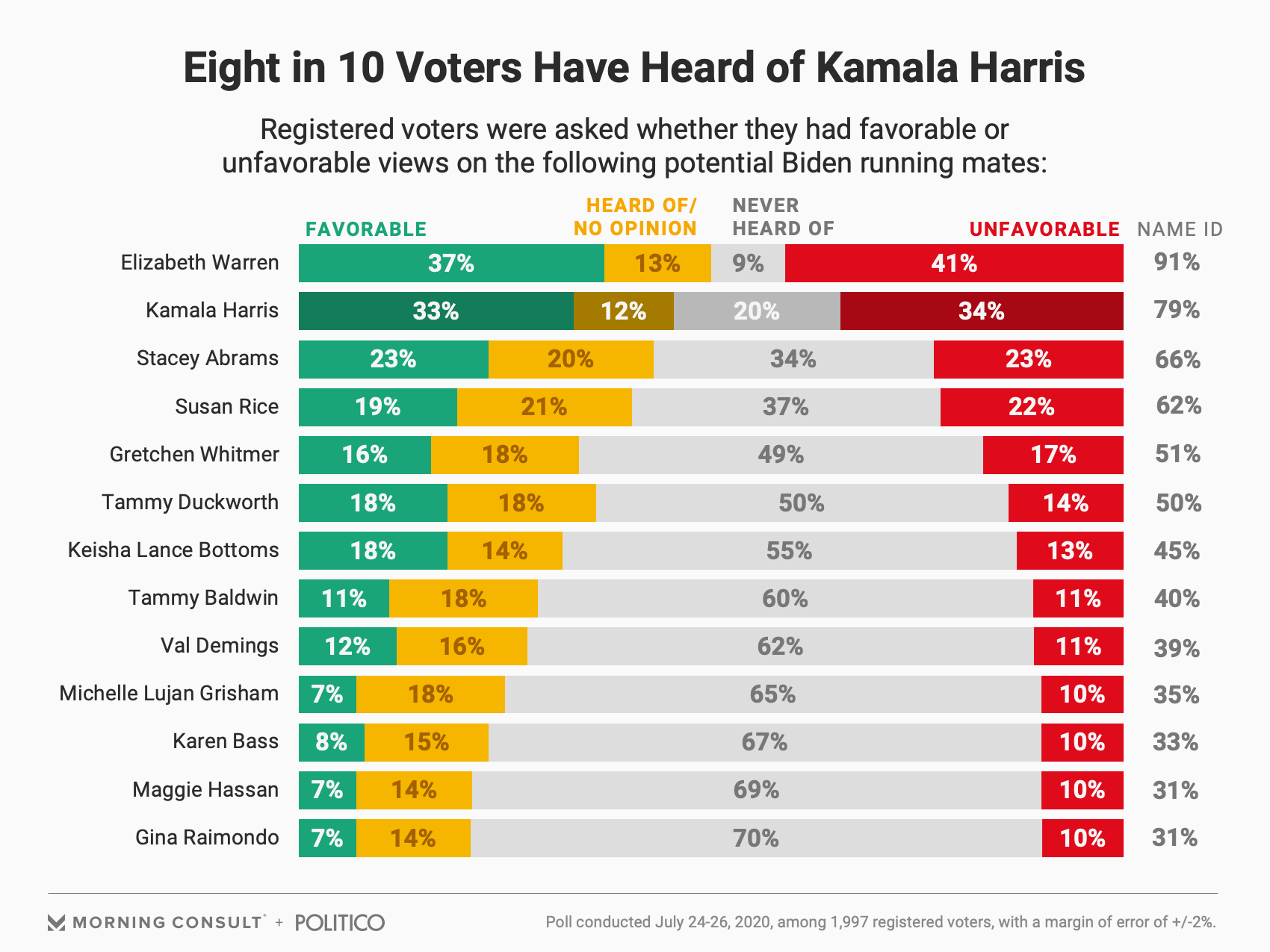 Research has shown vice presidential picks have had minimal effects in previous elections unless the figure is extremely polarizing, with strong favorable or unfavorable views either way. Vice presidential candidates have an even harder time getting voters to cross party lines.

Morning Consult polling conducted last month speaks to both points, finding none of the potential VP picks would immediately impact the race from an electoral perspective.

Roughly 4 in 5 voters have at least heard of Harris, more than any of the other Black women reportedly on Biden’s short list, and those with opinions are roughly split on how they view her: A third have favorable views and 34 percent have unfavorable views.

Harris begins her slot on Biden’s ticket with women divided (a third have favorable views and another third view her unfavorably), while she’s viewed positively by 50 percent of Black voters, second-highest after Sen. Elizabeth Warren (D-Mass.) among the potential picks. She was also the most popular candidate with moderates.

In advance of the announcement, one source close to the Trump campaign said questions about Biden’s age and chatter about a one-term presidency could raise the importance of a vice presidential pick in voters’ minds, but another said the decision — which hasn’t traditionally made a major impact on campaigns — would have a limited impact with a highly educated audience of voters.

Shortly after Biden’s announcement, Trump’s campaign released a statement highlighting her debate attacks on the former vice president, and dubbed the California Democrat, “Phony Kamala.” In a continuation of a strategy of pairing attacks on Biden’s age and competence with the allegation that Biden is a Trojan horse for the Democratic Party’s more liberal figures, Trump adviser Katrina Pierson said in an email that Harris is Biden’s “political living will.”