Since the end of July, confidence has climbed slightly, possibly in anticipation of executive action from the president, though a chasm between consumers and investors remains, Morning Consult economist John Leer writes. 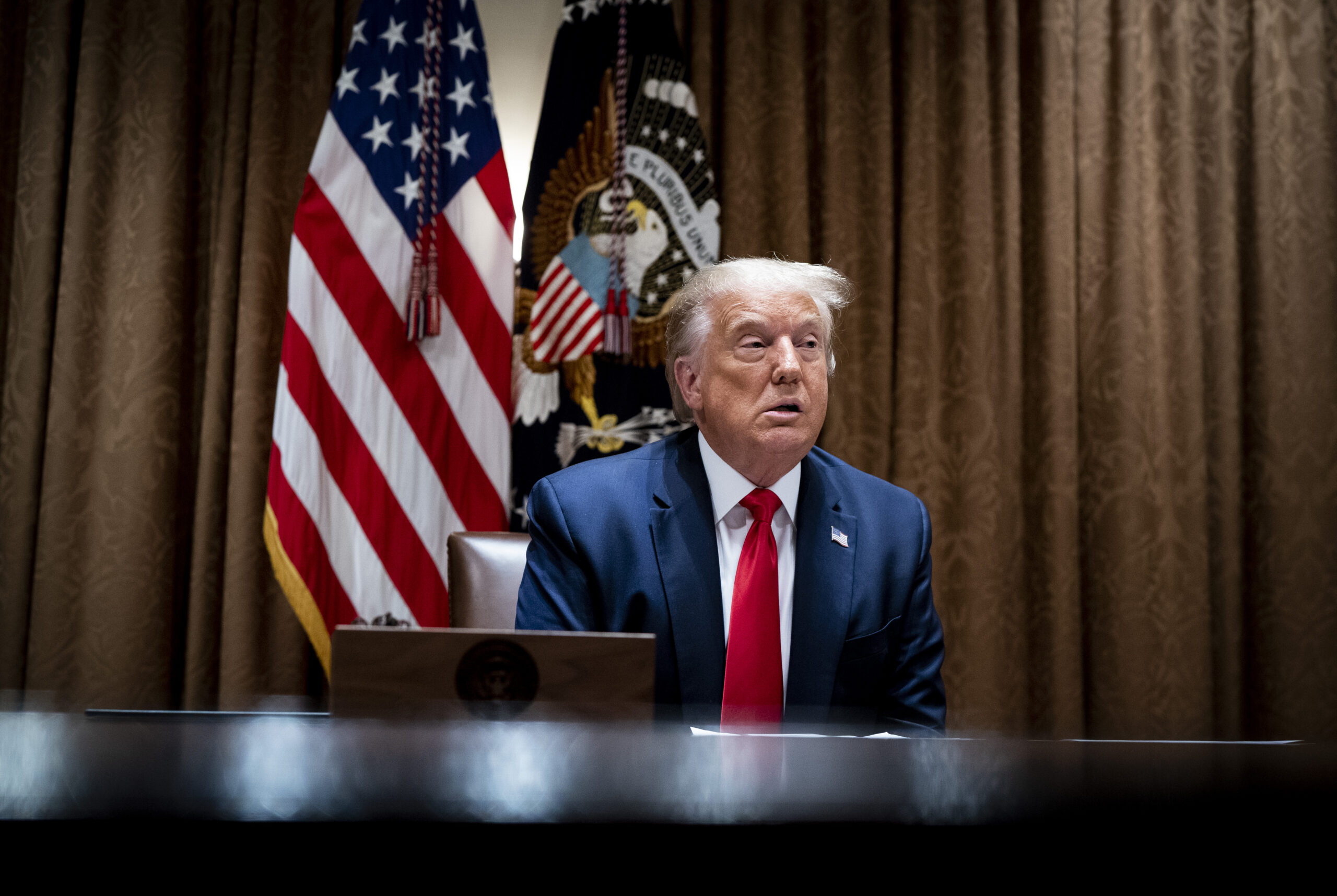 An increase in consumer confidence predated the announcement of President Donald Trump’s executive orders. Morning Consult economist John Leer writes that it's "possible that consumers and investors anticipated some sort of executive action from the Trump administration prior to the president’s official announcement." (Doug Mills/Getty Images)
By John Leer

After two weeks of negotiations between White House officials and Democratic leadership ended without an agreement on a new coronavirus relief package, President Donald Trump signed four executive orders designed to mitigate the economic fallout from the pandemic. Whether those actions are effective in lessening the economic damage wrought by COVID-19 remains to be seen, but the ancillary impact they could have on U.S. consumer confidence and what they mean for consumer spending and the economy is a bit more clear.

While the direct impact of the orders on consumer spending is fairly evident — $300 in federally guaranteed weekly unemployment benefits is less than the $600 per-week jobless payments that expired July 31 — the total effect of the actions also depends on how consumers respond to the announcement. All else equal, consumers tend to spend more money when confidence is higher, so the announcement of the executive action on its own may impact consumer spending via consumer confidence. Additionally, the executive orders may influence consumer spending by increasing stock prices. Rising stock prices increase Americans’ wealth, which tends to increase their confidence and spending.

The graph below compares Morning Consult’s daily Index of Consumer Sentiment (ICS) with changes from a year ago in daily closing values of the S&P 500.

As noted in a previous analysis, theoretical and empirical differences between consumer confidence and the S&P 500 require transforming the stock price data from daily closing values to changes from a year ago in daily closing values on the exchange. This transformed data series reflects investors’ expectations of future corporate profits relative to their expectations from 12 months ago. In other words, how have investors’ future expectations changed over the past 12 months? Similar to the ICS, this perspective is both forward- and backward-looking since it builds an assessment of the future relative to the past. Transforming the S&P series by looking at changes from a year ago also removes the long-term positive trend in the data, making it possible to compare trends over time. 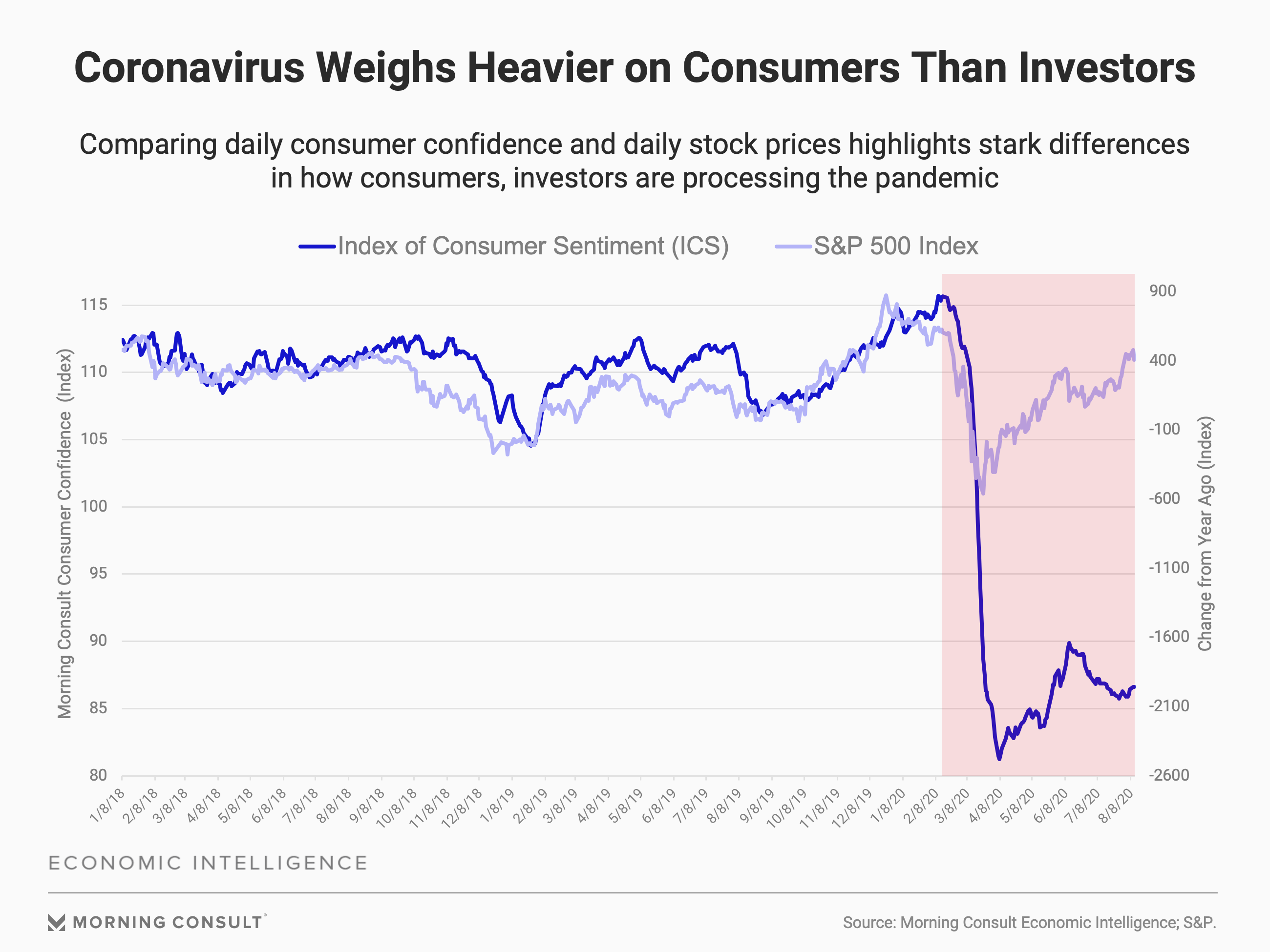 Since the onset of the pandemic in the United States, daily consumer and investor confidence exhibit broadly similar trends, as characterized by four distinct turning points:

Since the end of July, consumer and investor confidence started to rebound. The increase in confidence predated the announcement of Trump’s executive orders, but oddly enough coincided with news that the negotiations between Democrats and White House officials were stalling. Thus, it is possible that consumers and investors anticipated some sort of executive action from the Trump administration prior to the president’s official announcement.

The timing of the increase in consumer confidence from April to June coincided with a slowdown in the spread of the virus as well as the initial round of economic impact payments from the CARES Act hitting Americans’ bank accounts. Thus, if recent history is any indicator of the future, consumers will wait to update their economic outlooks until they receive the money promised to them in the executive orders. Unlike the CARES Act, the share of Americans likely to benefit from the orders is noticeably smaller, meaning that the effect on consumer confidence is likely to be less.

Recent increases in the stock market are also less likely to influence consumer sentiment as much as they did prior to the onset of the pandemic. Divergences between consumers and investors are a function of differences in the relative importance of the spread of the virus on confidence. Consumer confidence suffers more than investor confidence when the average number of new daily cases increases.

Rather than reflecting alternate sets of facts, it is possible that the spread of the virus actually affects consumers and their finances more directly than it does corporate profits. Comparing recent trends in unemployment with trends in earnings supports this explanation. The unemployment rate and unemployment insurance claims have both reached historic highs during the pandemic, but corporate earnings during the second quarter  largely exceeded expectations. Technology companies have fared particularly well during the pandemic, and they account for a large share of the S&P 500.

In light of these trends, consumer confidence is likely to steadily increase in the coming weeks provided that the rate of the spread of the virus does not increase. The boost to consumer spending is likely to be a direct function of the total amount provided to those receiving unemployment benefits. In other words, it is unlikely that there will be any additional spending due to an improvement in animal spirits. Recent gains on Wall Street have yet to translate into increases in consumer confidence, and that divergence is likely to persist for the duration of the pandemic.