U.S. Fossil Fuel Sector Has Come Out Far Ahead of Renewables in Pandemic Relief, Recent Policies

Energy Policy Tracker: Since March, U.S. has devoted more to its fossil fuel sector than any other G-20 country

President Donald Trump speaks to city officials and employees of Double Eagle Energy on the site of an active oil rig on July 29, 2020, in Midland, Texas. At least $71.6 billion in federal funds has been allocated directly or indirectly to the U.S. fossil fuel industry since the beginning of the coronavirus pandemic, while roughly $349.5 million has been devoted to renewable energy, according to data from the new international Energy Policy Tracker. (Montinique Monroe/Getty Images)
By Lisa Martine Jenkins

At least $71.6 billion in federal funds has been allocated directly or indirectly to the U.S. fossil fuel industry since the beginning of the coronavirus pandemic, while roughly $349.5 million has been devoted to renewable energy, according to data from the new international Energy Policy Tracker. And projects involving multiple energy sources — such as public transportation — have received at least $26 billion, according to the data.

The tracker also found that one Pennsylvania policy change committed $667 million to fossil fuels, while California and New York have pledged a combined $999.8 million to renewables. The data has been compiled by the project’s six core members: five policy institutions and Columbia University. 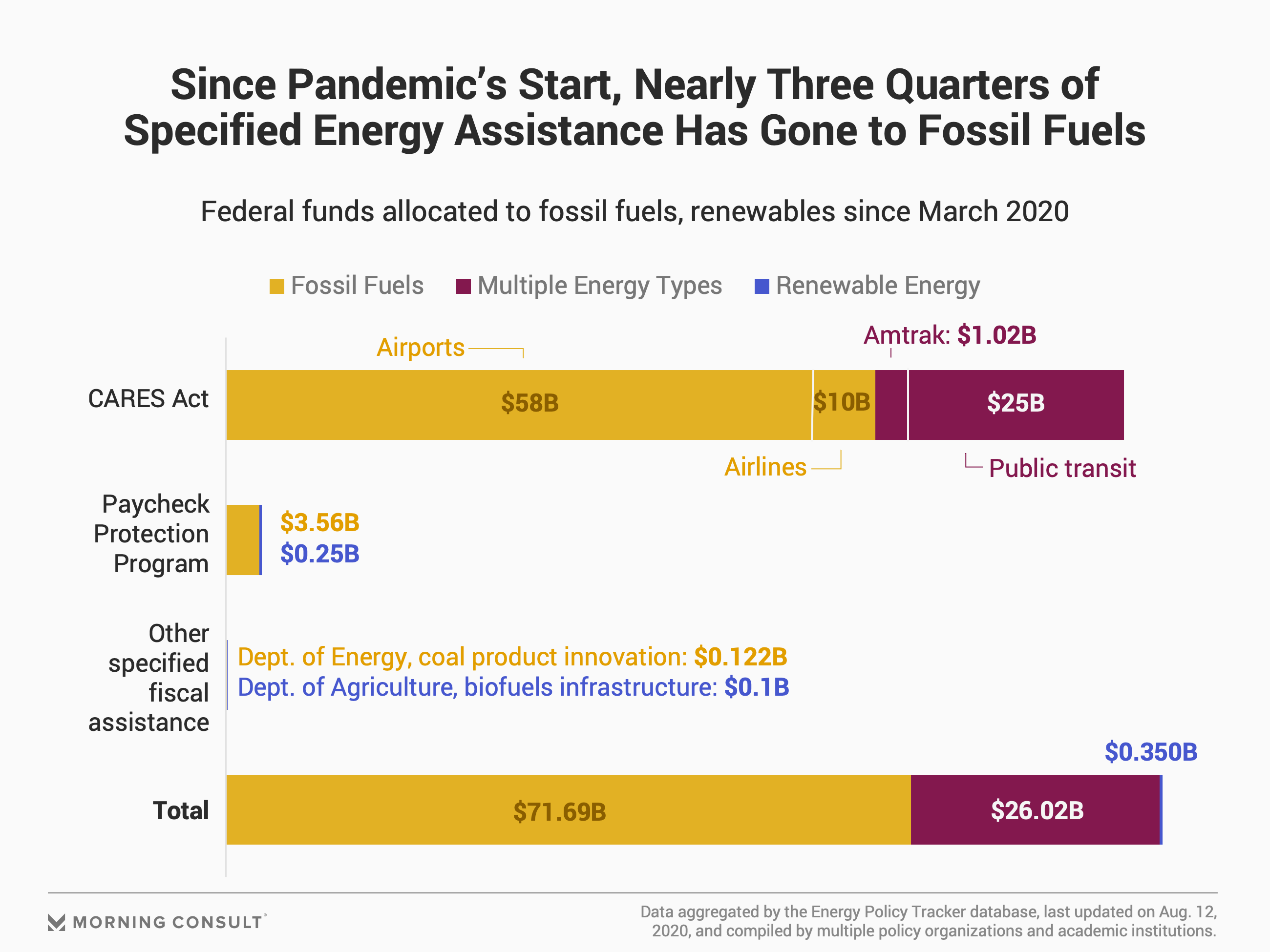 The tracker’s own analysis finds that the United States’ projected investment of at least $99.72 billion across all energy sources stands out not only because of the size of its commitments but also because of the allocation. The country has committed more to fossil fuel companies through federal and state policies than any other Group of 20 member has directed to all energy types — fossil and renewable combined — since the start of the pandemic, both through relief packages and other, ostensibly unrelated, policy changes.

Germany and France come closest to the United States’ largesse, committing at least $60.85 billion and $59 billion, respectively. In both countries, the majority of those funds have been devoted directly or indirectly to renewable energy. In the United States, however, a patchwork of policies have given the fossil fuel industry a leg up.

Signed into law in late March, the Coronavirus Aid, Relief, and Economic Security (CARES) Act delivered over $2 trillion in economic relief in the wake of the coronavirus pandemic’s arrival in the United States. The law’s funds included an estimated $560 billion in cash payments and expanded benefits to individual Americans, as well as $500 billion to large corporations.

While segments of both the oil and gas and renewables industries pushed for assistance in relief packages like the CARES Act, the tracker indicates that the only aid that benefited the energy sector came in the form of rescue for the transportation sector. At the time, the airline industry argued that it was hit “at lightning speed” by the crisis due to customers’ reluctance to travel, a phenomenon that passenger railroad service Amtrak and public transportation systems no doubt confronted, as well.

Of the roughly $94 billion allocated to these transportation sectors, 72 percent went to airports and airlines, which the tracker categorizes as using oil and oil products. The remaining 28 percent directed to Amtrak and public transportation, meanwhile, use “multiple energy types.” None of the CARES Act funds specifically benefited the renewables sector.

The CARES Act also created the Paycheck Protection Program, which provides small businesses with funds to cover their payroll costs for up to eight weeks, as well as mortgage interest, rent and utilities. While the funds disbursed by the program are officially loans, they are eligible for forgiveness by the Small Business Administration if companies meet employee retention criteria and use the funds for eligible expenses.

According to the calculations by the policy tracker, at least $3.8 billion has been disbursed to energy companies through the program, the vast majority (93.5 percent) to fossil fuel companies.

Meanwhile, a number of other recent policies not explicitly connected to relief for the pandemic or its accompanying economic fallout have also resulted in money for the sectors, such as one Department of Energy competition to establish coal product innovation centers ($122 million) or one Department of Agriculture policy providing support for biofuels infrastructure ($100 million).

And a number of policies that still do not have specific dollar amounts tied to them have the potential to provide future fiscal support for the energy industry, from one controversial executive order waiving environmental reviews of infrastructure projects to a sought-after deadline extension on tax credits for both wind and solar.

While the ultimate fiscal impact of these policies has yet to be seen, their aim is to provide relief to sectors suffering from flagging demand for energy as the coronavirus’ impact persists. The Energy Policy Tracker will continue to be updated weekly as further grants and policy changes impact the sectors.

The project is funded by multiple grants provided to each partner organization by international governments and other development agencies. It is led by Ivetta Gerasimchuk, the sustainable energy supplies lead for the International Institute for Sustainable Development in Geneva.