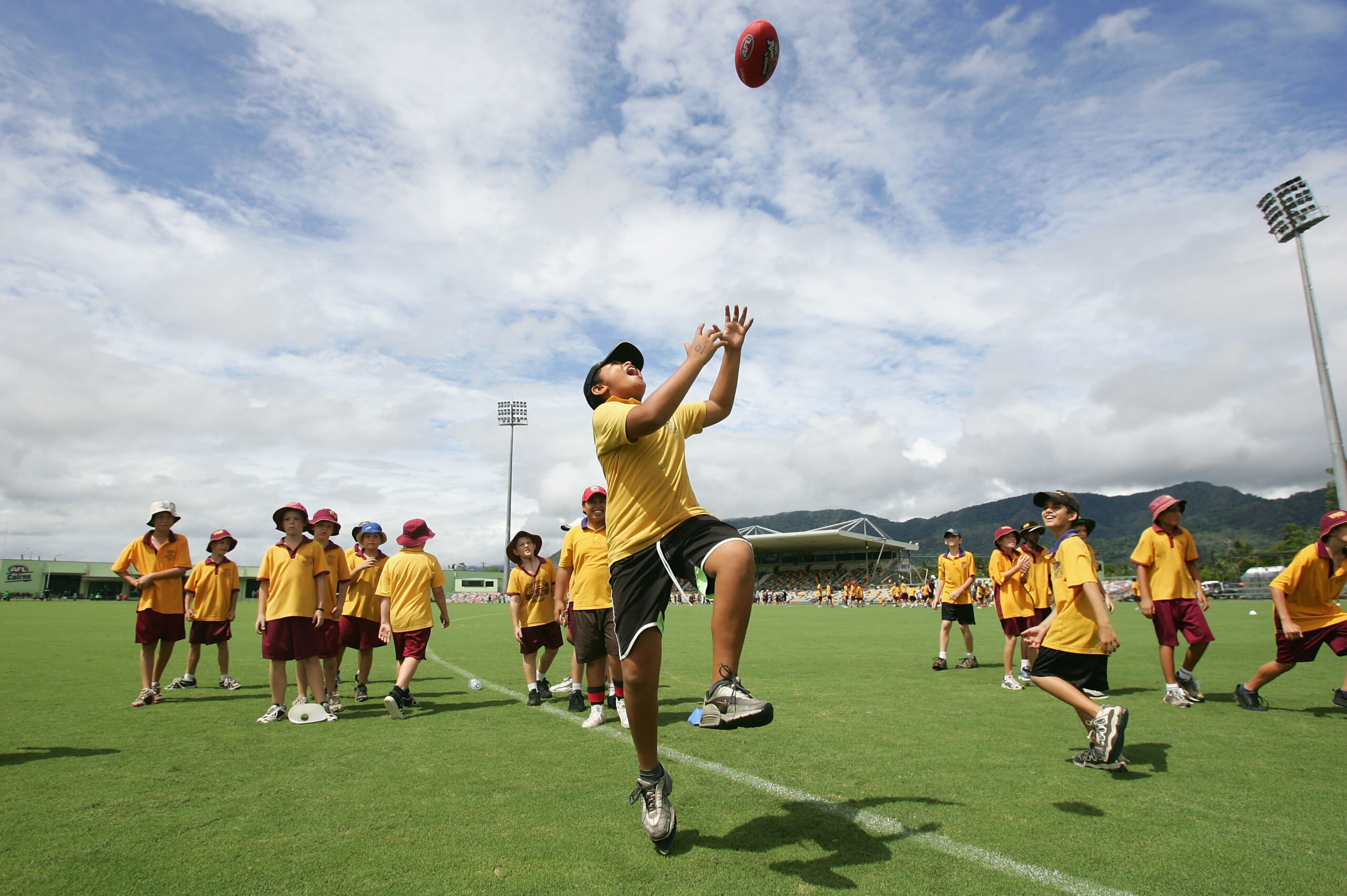 Many parents across the country, already wrestling with the decision over whether to send their children to school for in-person instruction, must also determine whether the benefits of their kids’ participation in youth sports are worth the risks associated with the spread of the coronavirus. 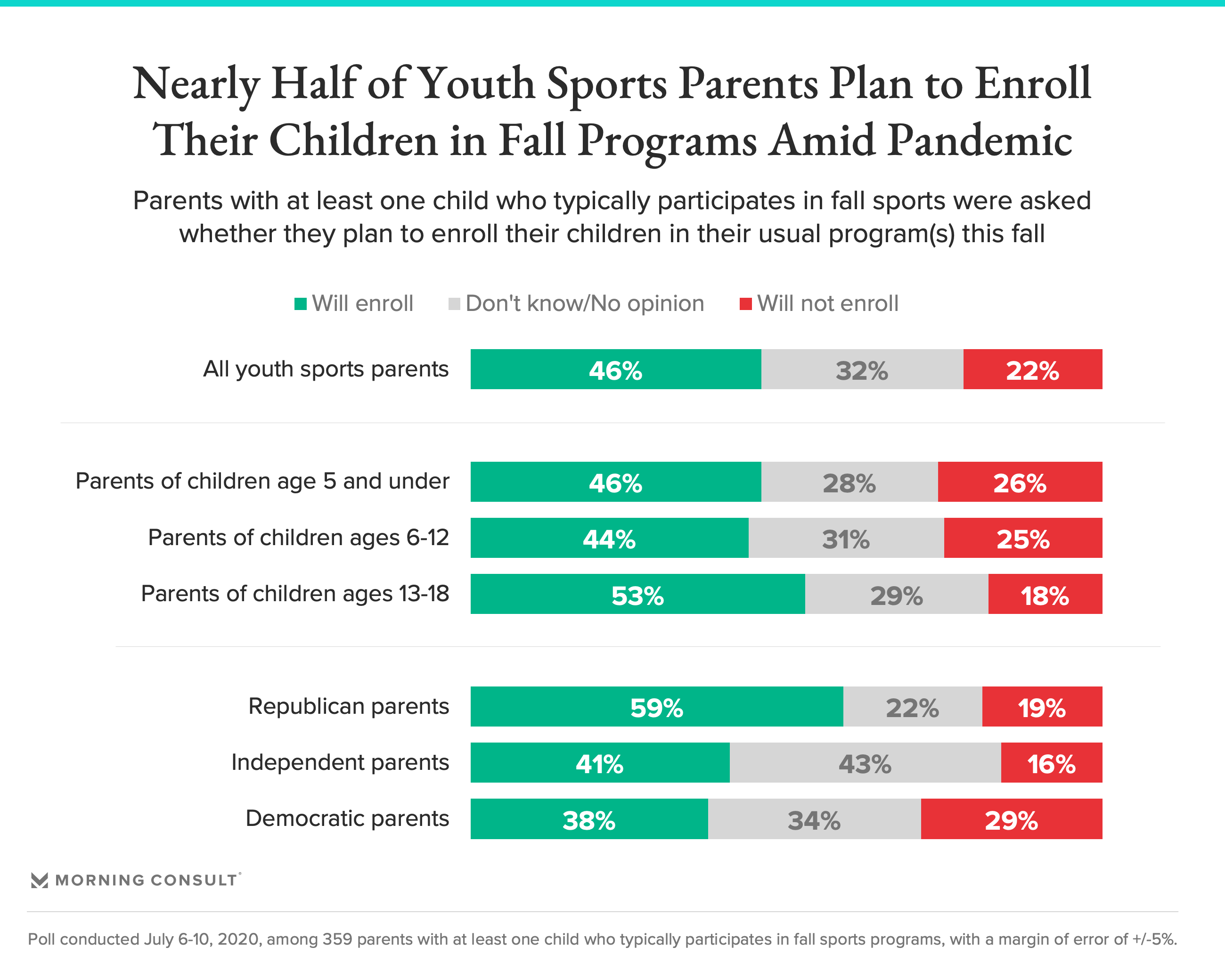 “The majority of coaches and the majority of parents want their kids back on the field,” said Peter Carey, a father of four who runs California Premier League, a nonprofit soccer club in San Juan Capistrano, Calif. “It doesn’t do us any good to have our kids in the house so long,” he continued, expressing concern about the negative effects of the additional screen time that usually accompanies more time spent indoors. 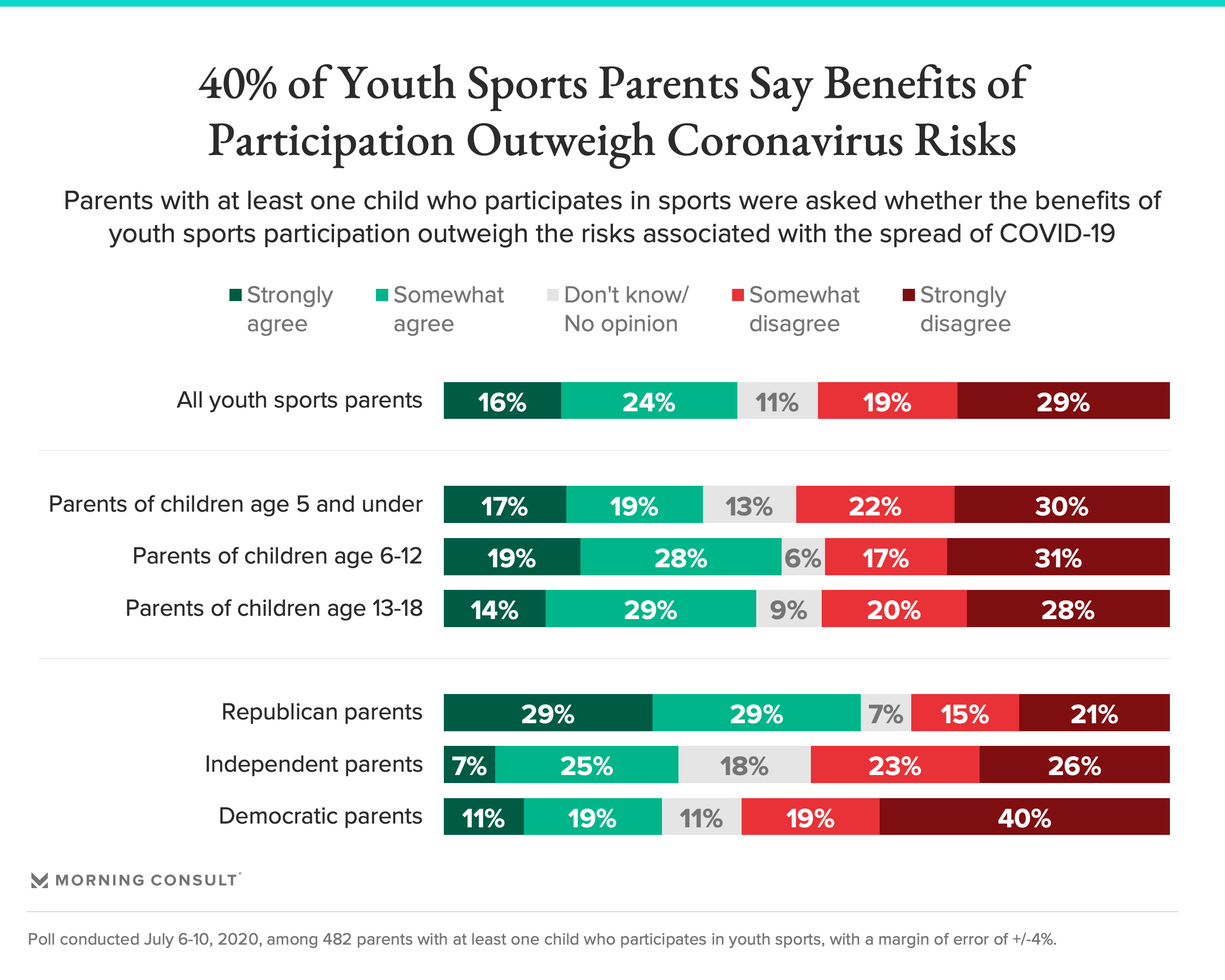 Among the 482 youth sports parents surveyed July 6-10, 40 percent of parents felt the benefits of their children’s participation in organized sports outweighed the risks associated with the spread of the coronavirus. A slightly larger share of respondents — 48 percent — disagreed with that line of thinking, demonstrating the divide among parents about how to best keep their kids mentally and physically healthy amid the pandemic.

The survey of 482 youth sports parents carries a margin of error of 4 percentage points.

In a separate survey of 137 program organizers conducted by LeagueSide Inc., a company that facilitates corporate sponsorships for youth sports leagues entities, 12 percent of respondents said their organization had fully resumed play and 37 percent indicated they had returned to the field in a limited fashion. Twenty-nine percent of leagues and programs said they are in danger of shuttering permanently, down from 46 percent in an April survey of 290 organizers also conducted by LeagueSide. 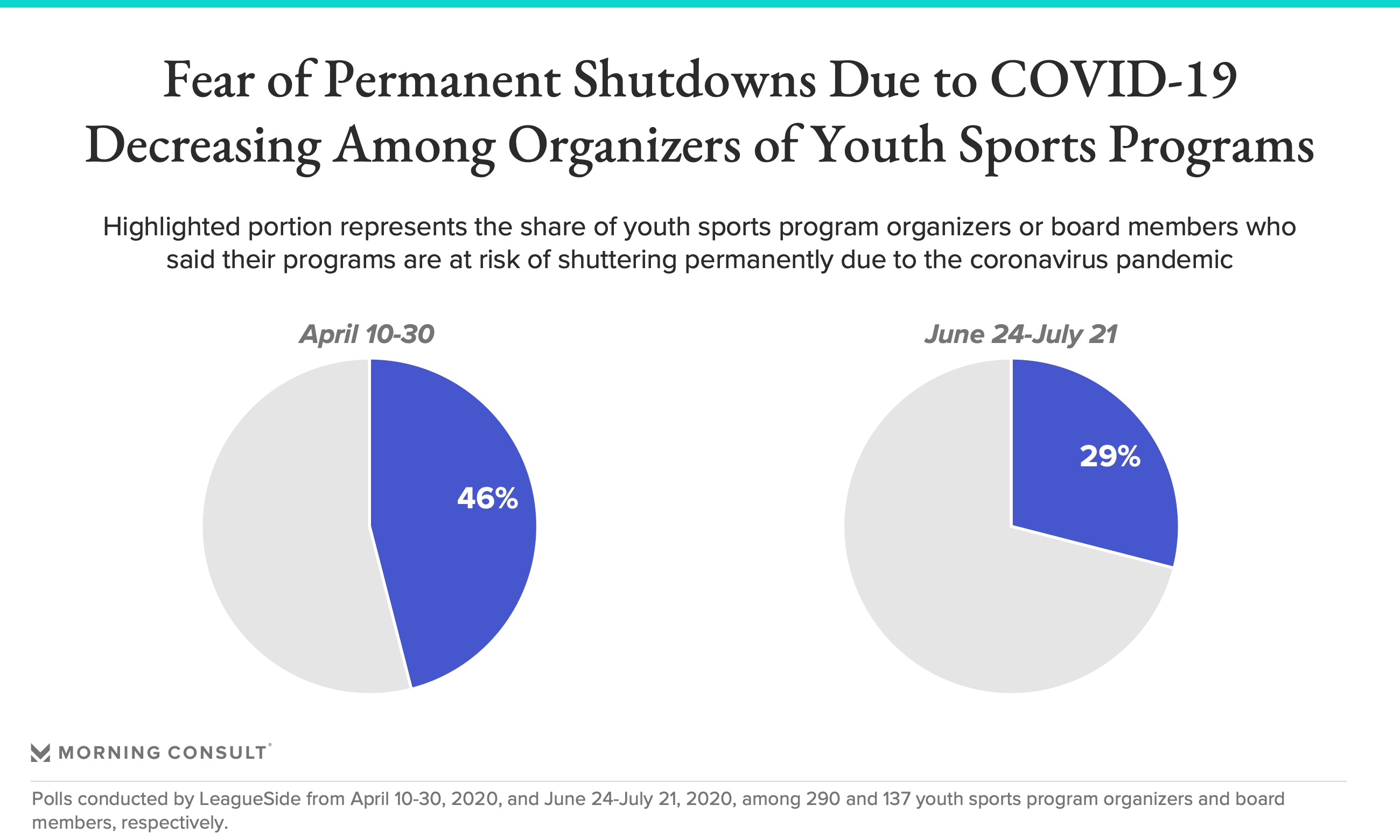 The U.S. youth and recreational sports market is worth $17 billion, according to an April 2019 WinterGreen Research Inc. estimate, a figure that includes registration, fields of play, equipment, travel, food, coaching, analytics and video. Most of the organizations polled in the recent LeagueSide survey identified as nonprofits.

Due to the fluid nature of the coronavirus, many organizers said their plans and operational capabilities have changed numerous times since completing the survey, primarily due to changes in local and state-level guidance.

“Everything’s got a two-day shelf life on it: One day it’s one thing, and the next day it’s another,” Carey said of restrictions on sports participation in California that have delayed his organization’s attempts to begin socially distanced practices. He hopes to be able to hold games by October but acknowledges it’s a very tenuous situation.

Key City Soccer Association program director Dan Rothert has had to take two states’ regulations into account in determining the best path forward for his club. While the club’s home state of Iowa was among the first to permit youth sports to resume amid the pandemic, it usually competes in league games against opponents from nearby northwest Illinois, where regulations are more stringent. 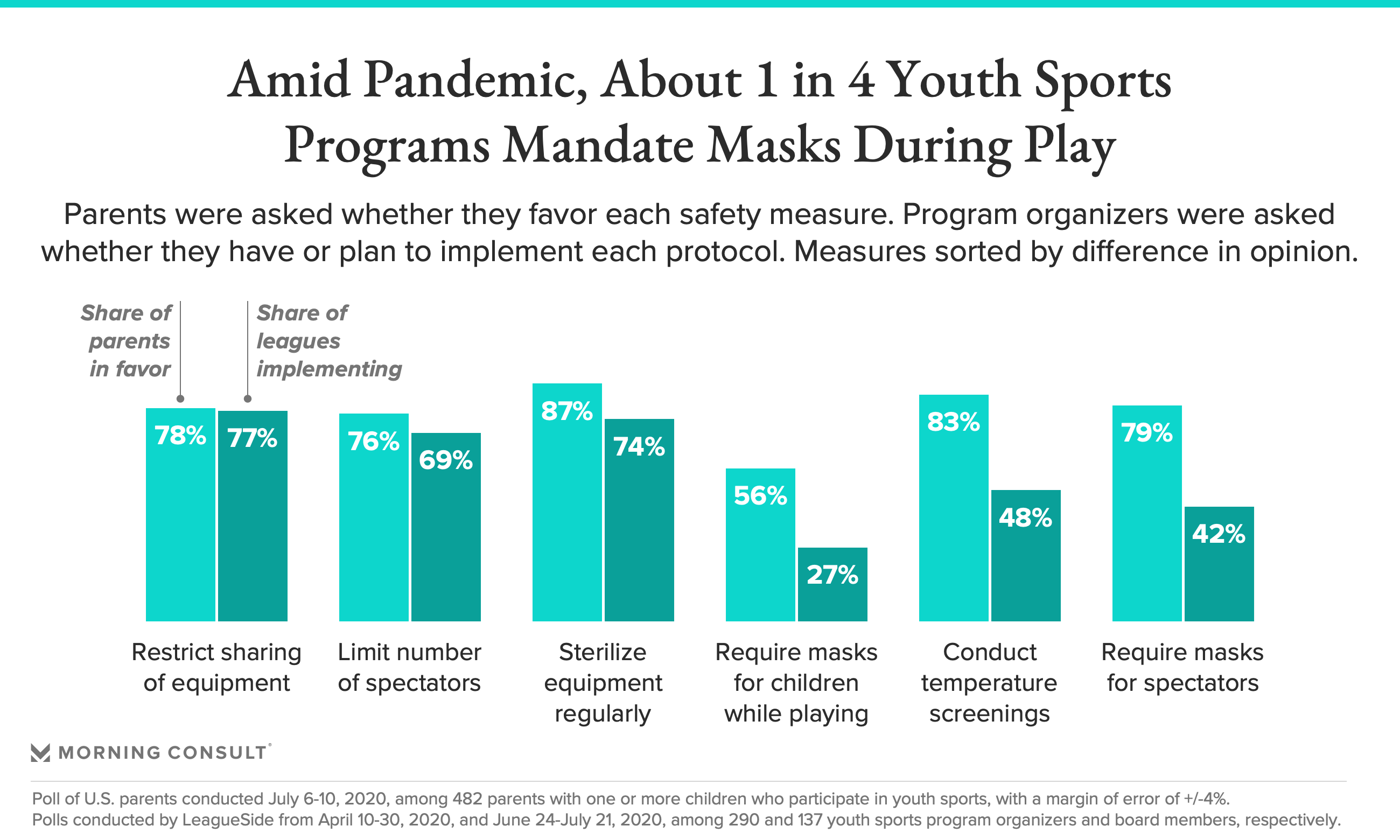 The Dubuque-based organization has found a middle ground by holding small group practices and starting a 3-on-3 competition for the fall among its membership. While other clubs in Iowa have reached out about friendly matches, Rothert plans to forgo full-fledged games for now.

“We have decided as a club to wait and see how things are gonna look here,” he said. “School is going to start and that’s the priority. We don’t think we have the right to invade that priority or take away from the school opportunity.”

William Lee, who runs the highly competitive Texas Select Youth Football League, indicated in the survey that he planned to hold a fall season but has since reversed course. He acknowledged that other football programs in the state are attempting to forge ahead, but he said they are struggling to sign up enough players.

“Every organization is looking for players for every age group, and here we are already in mid-August — seasons normally start Labor Day weekend,” he said. “They’re pushed back a bit, but if you don’t have kids by now, you’re not going to have them. These parents have made their minds up.”

Lee, whose league holds its championship game at the Dallas Cowboys’ AT&T Stadium, expressed concerns about potential lawsuits related to players, parents or coaches contracting coronavirus, expenses due to added safety protocols and parents seeking refunds if the season is cut short.

Most importantly, however, he is concerned about the public health crisis COVID-19 represents.

“We’re not going to be a conduit or an enabler like some of these other leagues are being,” he said.