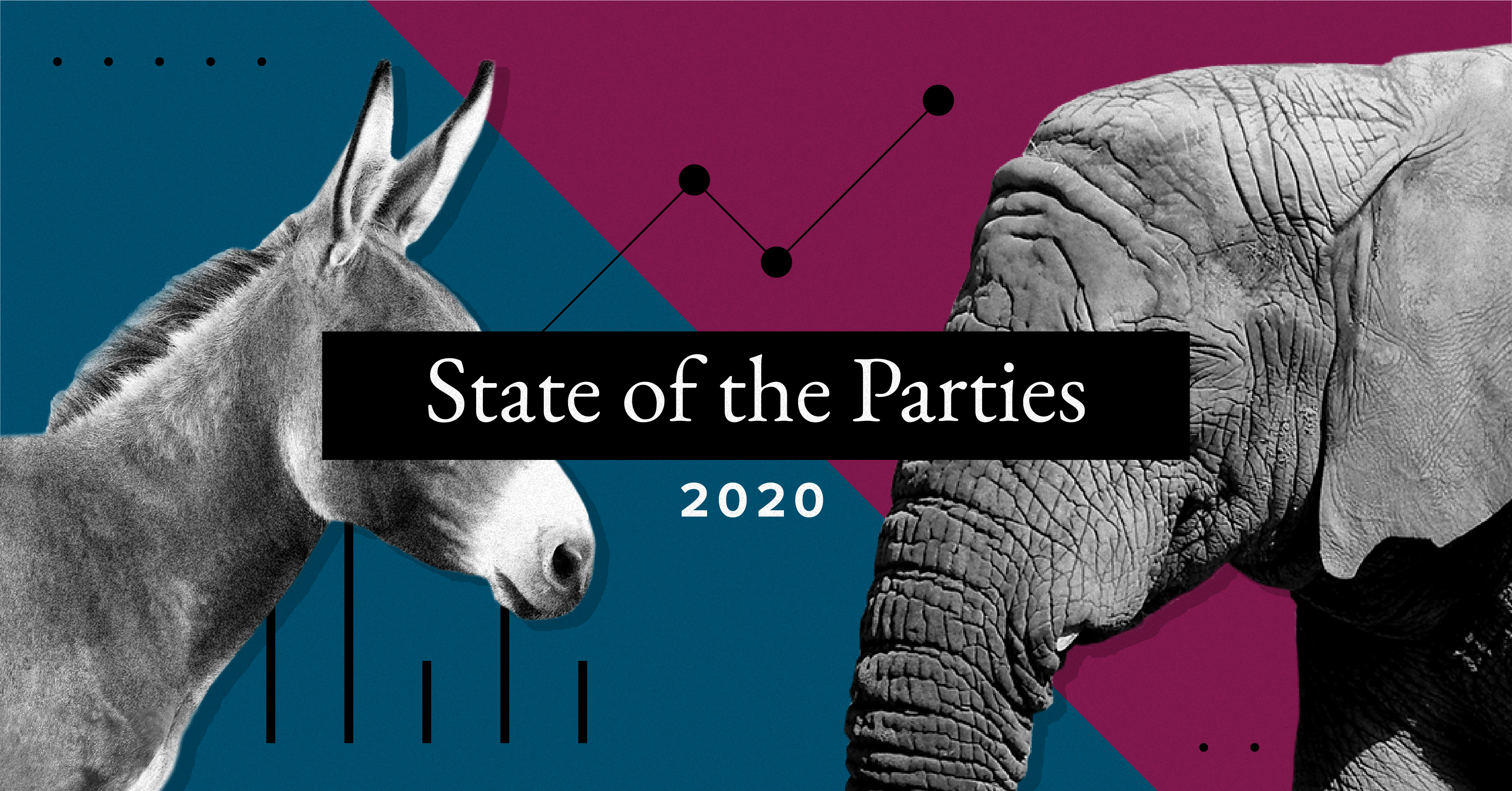 A lot has changed in American politics since the Democratic and Republican national conventions four years ago, but even President Donald Trump’s turbulent tenure and the unfolding public health and economic crisis brought by the coronavirus haven’t significantly altered the electorate’s views on the two major parties’ capacity to lead the nation.

According to the latest edition of Morning Consult’s State of the Parties poll, the Democratic Party led by former Vice President Joe Biden maintains a narrow advantage over the GOP when it comes to governing and tackling the country’s most pressing issues, while the two parties are again statistically tied on the question of who can best keep the country safe. 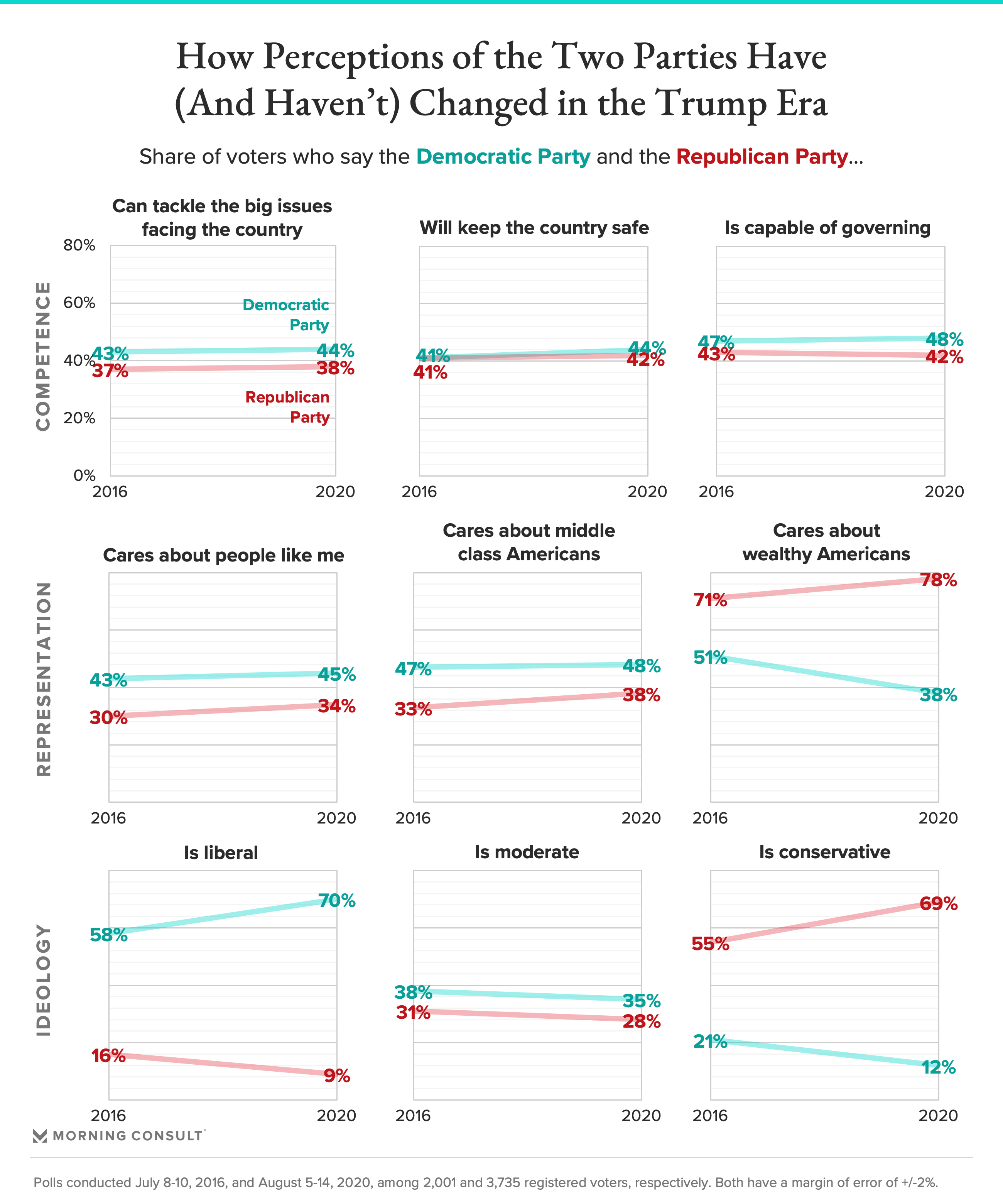 Nearly half of voters (48 percent) said the Democratic Party is capable of governing and 44 percent said it is adept at handling the country’s major issues, compared with 42 percent and 38 percent who respectively said the same of the Republican Party. The gaps in the figures from the Aug. 5-14 survey of 3,735 registered voters are in line with a similar poll conducted just before the Democratic and Republican national conventions in 2016, which kicked off the contest between Hillary Clinton and Trump.

That relatively even standing contrasts with how voters are grading the parties on the specifics: Morning Consult/Politico polling shows both Biden and Democrats on Capitol Hill have a double-digit advantage over Trump and congressional Republicans on addressing the spread of coronavirus, and Democrats at the presidential and congressional level have closed the gap on the economy, an issue where Republicans typically have an edge.

While Democrats’ advantage on COVID-19 doesn’t appear to be buoying broader perceptions of the party’s competence, public sentiment is more favorable when comparing the party with the GOP on questions of empathy and representation for the country’s voters.

Though Americans have become slightly more likely to say the Republican Party “cares about people like me” and middle-class Americans, Democrats now sustain a double-digit advantage on the question. Republicans are increasingly viewed as caring about the wealthy (from 71 percent to 78 percent) while voters have Democrats trending in the other direction (from 51 percent to 38 percent). 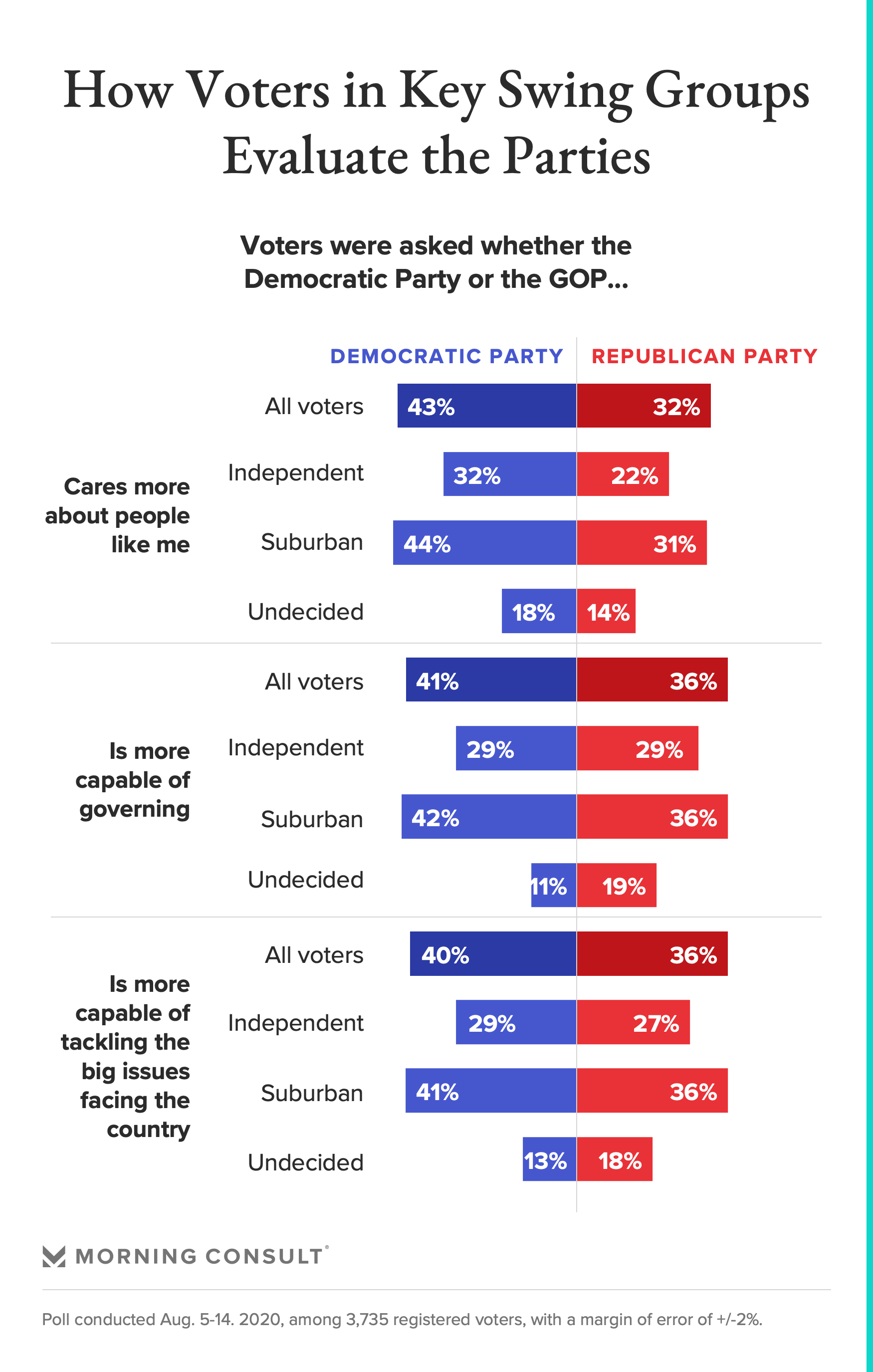 When voters were asked to choose which party better embodies certain statements, Democrats were similarly favored among all voters, as well as those who hail from the suburbs, on questions about empathy, while competence drew a comparatively mixed reaction, with voters who are undecided on the 2020 contest slightly favoring the GOP.

While Biden has focused his campaign’s arguments on his ability to lead, Trump has sought to use voter perceptions about a leftward-lurching Democratic Party to his advantage and cast Biden as a puppet of the far left. Perceptions of Biden’s ideology have moved slightly leftward since the Democratic primary, but voters are more likely to see Biden — who continues to steadily lead Trump nationwide in Morning Consult’s daily polling of likely voters — as more moderate than the president is.

Even as voters see both parties drifting away from the ideological center, the data shows they don’t necessarily see that to be a bad thing — and partisans even appear to be embracing it.

Compared to 2016, voters have become more likely to say both parties are headed in the “right direction.” 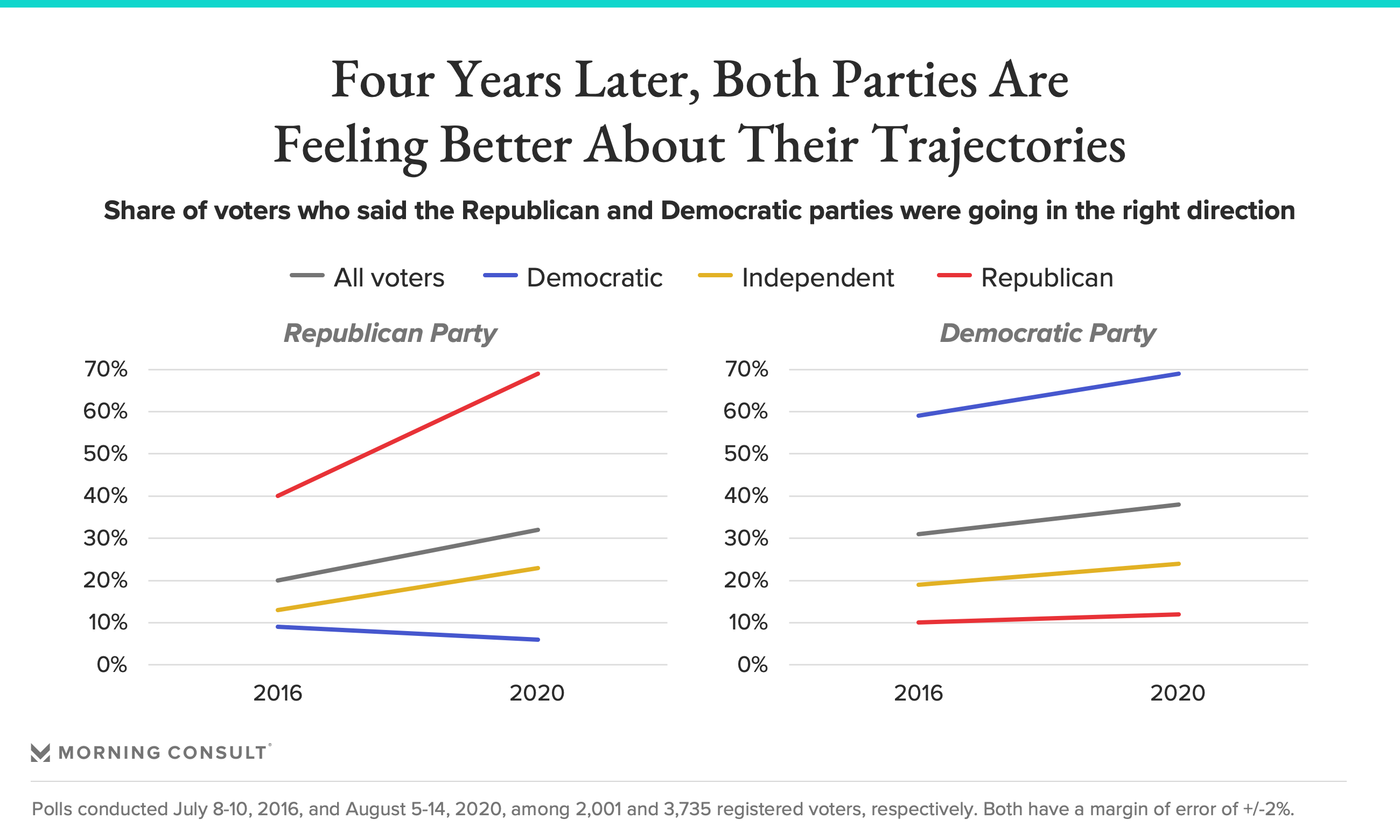 A third of voters said the Republican Party is headed in the right direction, up 12 points since 2016. That upward movement was largely driven by a nearly 30-point improvement among the party’s own voters — who have since aligned themselves with the president after some reluctance in 2016 — as well as a modest improvement among independent voters. Both polls have a 2-point margin of error.

Thirty-eight percent of voters said the Democratic Party is headed in the right direction, up 7 points from four years ago and driven by a 10-point rise among Democrats (from 59 percent to 69 percent). 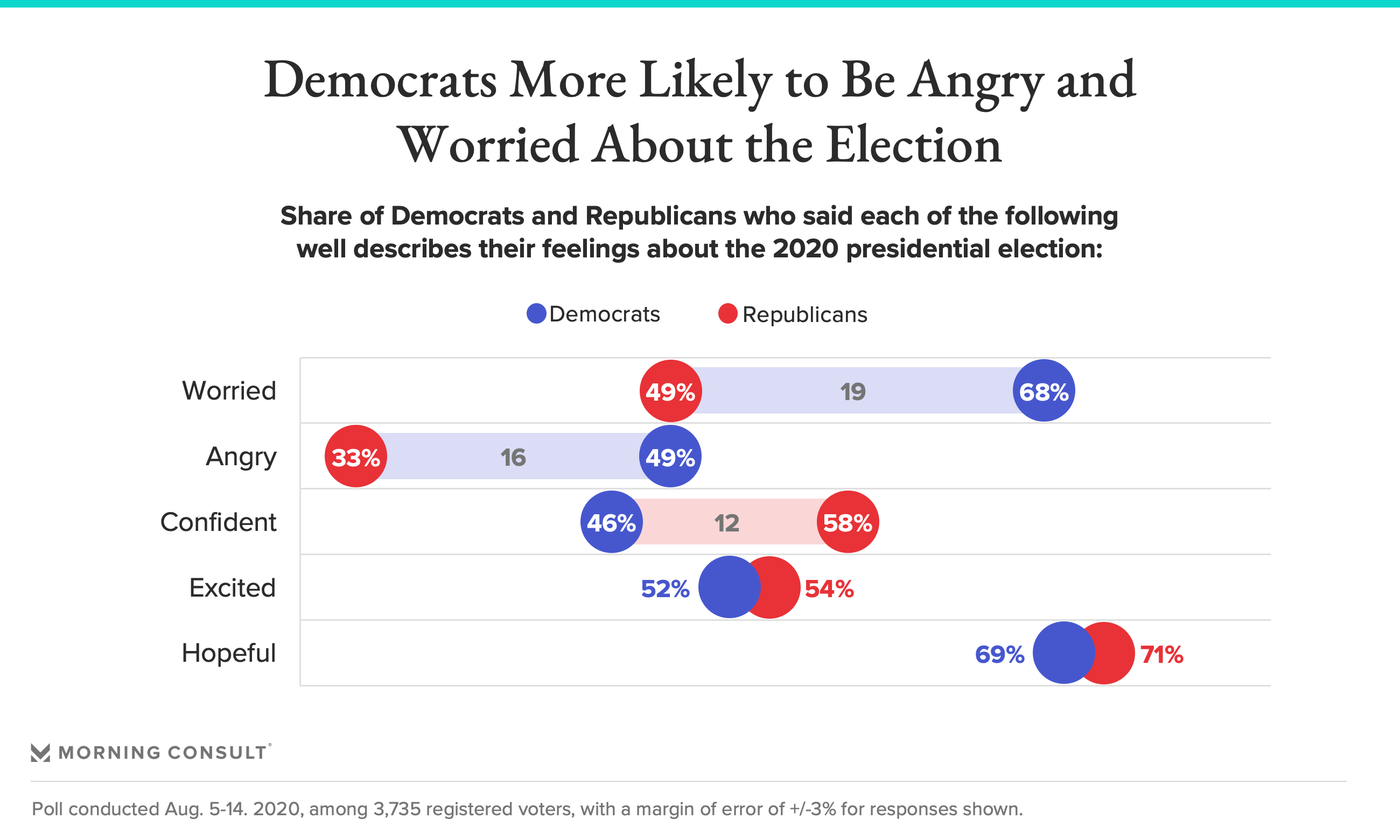 That doesn’t suggest Democrats are getting cocky. Biden’s party faithful are more likely than Trump’s base to say they’re worried about November (68 percent to 49 percent), though both parties are more worried than they were in a June 2018 poll conducted ahead of the midterms. A significant anger gap also persists from two years ago, with 49 percent of Democrats saying they are angry about the election versus a third of Republicans.

Democrats are also less likely than Republicans to say they’re confident (46 percent to 58 percent), though the survey found voters from the two parties are almost equally likely to say they are hopeful and excited about November, an improvement for the Democratic Party compared with the 2018 poll, when Republicans were more likely to express those positive sentiments. 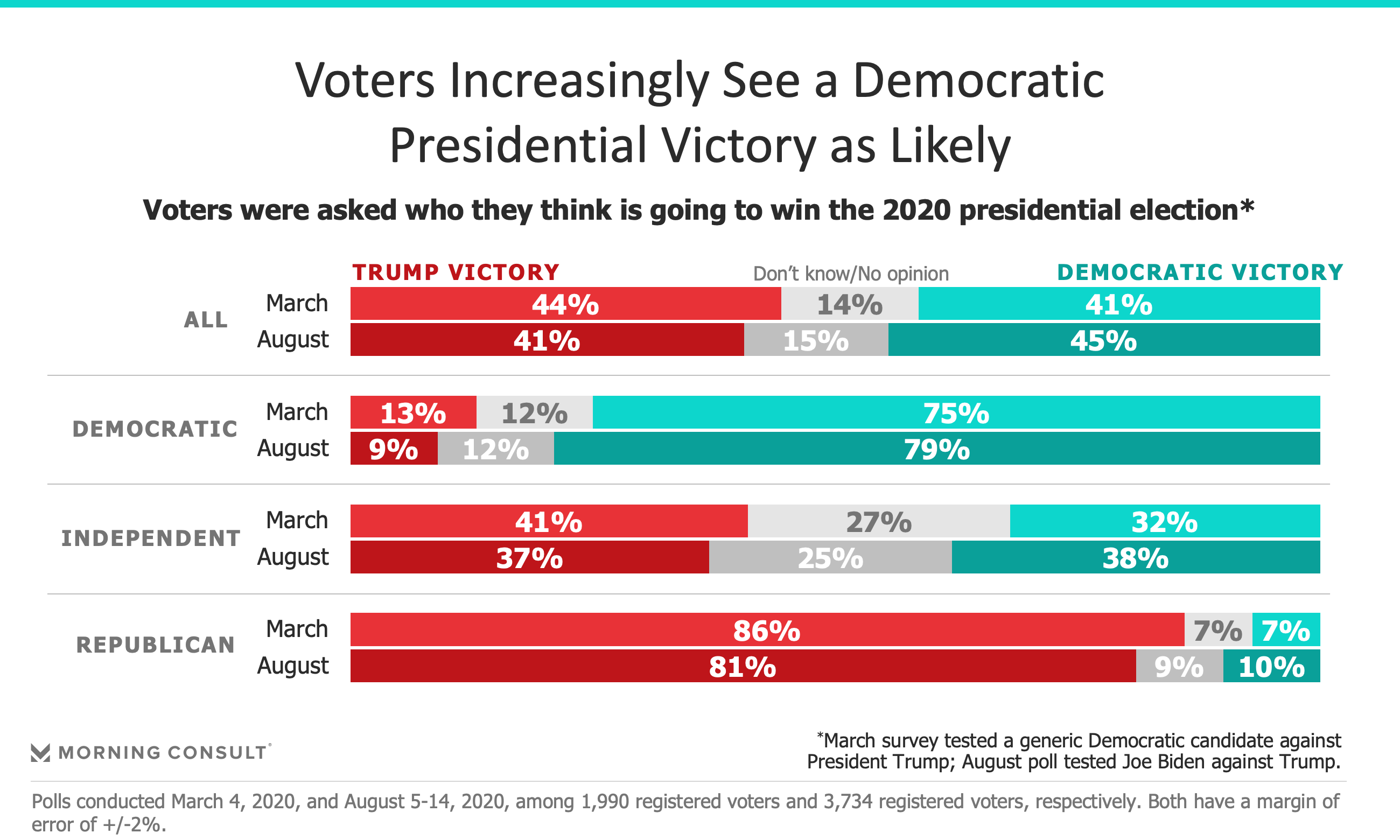 Roughly 4 in 5 Democrats and Republicans are predicting a November win for their party’s presidential nominee, with optimism about November’s outcome up among Democrats since Biden’s Super Tuesday victories in March.

Overall, a 45 percent plurality of voters predict a Biden victory, compared with 41 percent who expect Trump to win, nearly reversed since a March poll testing the incumbent against a generic Democratic candidate. That improvement on the outlook for a Biden win was fueled in part by independent voters, who are now split almost evenly when asked about the prospects for November.