Protesters gather outside of Postmaster General Louis DeJoy's condo on Aug. 15. New polling shows a plurality of voters believe recent changes instituted at the Postal Service by DeJoy were politically motivated and intended to make it harder for Americans to vote. (Michael A. McCoy/Getty Images)
By Eli Yokley

While President Donald Trump has cited unfounded concerns about voter fraud in his opposition to widespread mail-in voting for November’s election, and the United States Postal Service’s new leader cited the agency’s tough financial situation when pressing for changes that have slowed the mail, the bulk of voters don’t believe either one is being sincere about his motivations.

A new Morning Consult poll found 51 percent of voters said they think Trump opposes mail-in voting because he believes it will make it harder for him to win re-election. Additionally, a 42 percent plurality of voters believe the operational changes implemented in recent months by Postmaster General Louis DeJoy are politically motivated and designed to make it harder for Americans to vote by mail. The Aug. 14-16 poll, which surveyed 1,994 registered voters, has a margin of error of 2 percentage points. 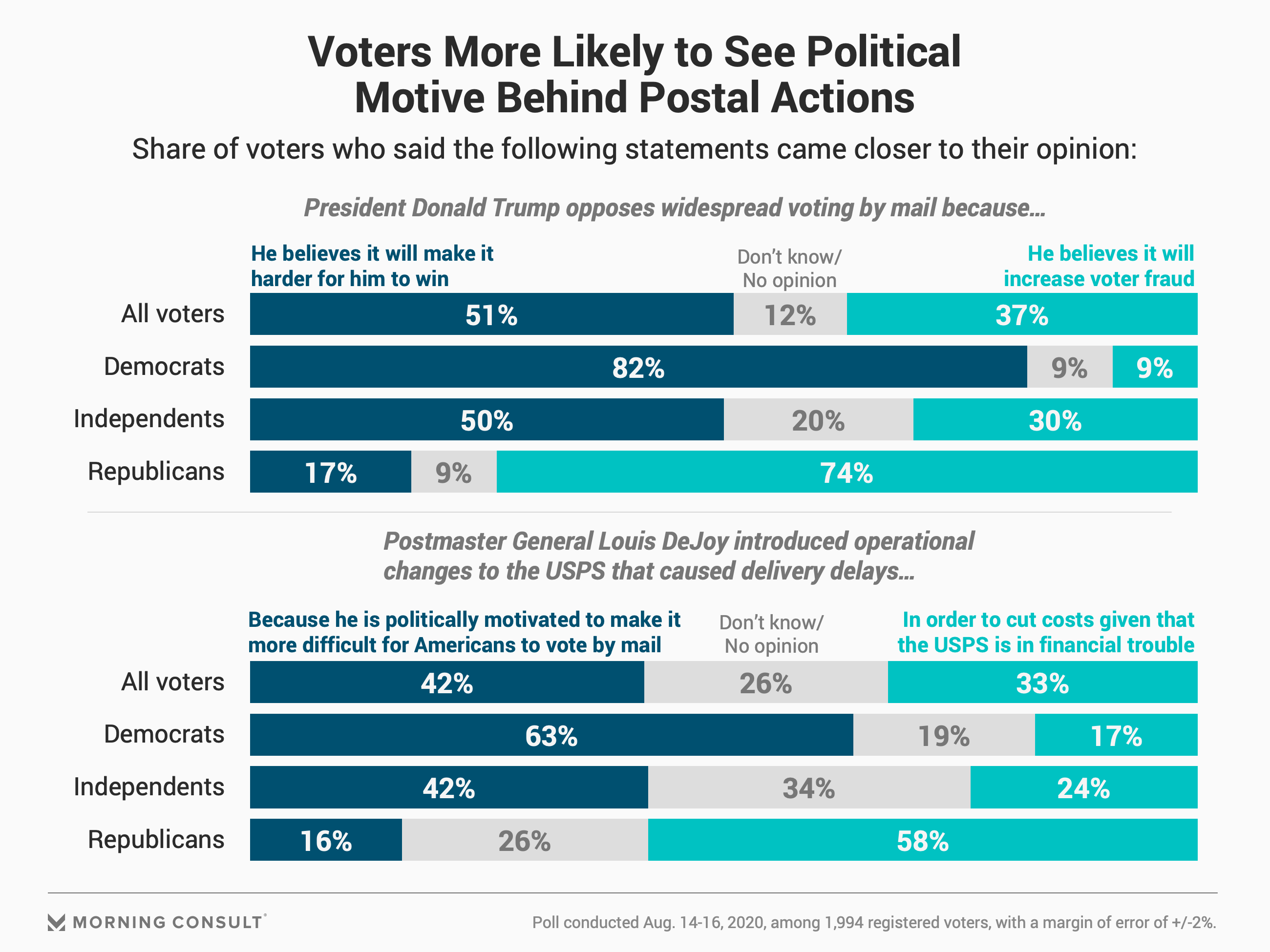 DeJoy, a longtime Republican donor, has instituted changes at the agency such as reductions in service and overtime authorizations, as well as facilitating the removal of mail collection boxes and sorting machines throughout the country. Those changes have led to delays in mail delivery and prompted the Postal Service to warn local elections officials that it cannot guarantee all ballots cast by mail will arrive in time to be counted.

DeJoy has said he implemented the changes — which he’s since put on hold until after the November election — due to the agency’s financial predicament, which was exacerbated by the coronavirus pandemic. A third of voters, including roughly 3 in 5 Republicans, took that explanation at face value.

Concerns about postal voting have been raised on both sides of the debate since March and the start of the global coronavirus pandemic, with voting rights advocates pressing for government officials to expand mail-in voting ahead of primary elections and the November contest. Trump and some of his allies, meanwhile, have raised fears about fraud and tampering related to vote-by-mail, though some Republican officials and operatives have voiced concerns that casting doubt on election integrity could undermine their own turnout.

Those fears have risen to the top of Democrats’ agenda in Washington as details have emerged about DeJoy’s operational changes, which have prompted lawsuits from several states concerned about voter disenfranchisement and invitations for DeJoy to testify on Capitol Hill. Democrats in Congress, on the campaign trail and at the Democratic National Convention say the changes at the Postal Service are a threat to democracy ahead of the November contest, when at least 3 in 4 voters will have the option of voting by mail, according to a Washington Post analysis. And polling shows they appear to have the public’s ear. 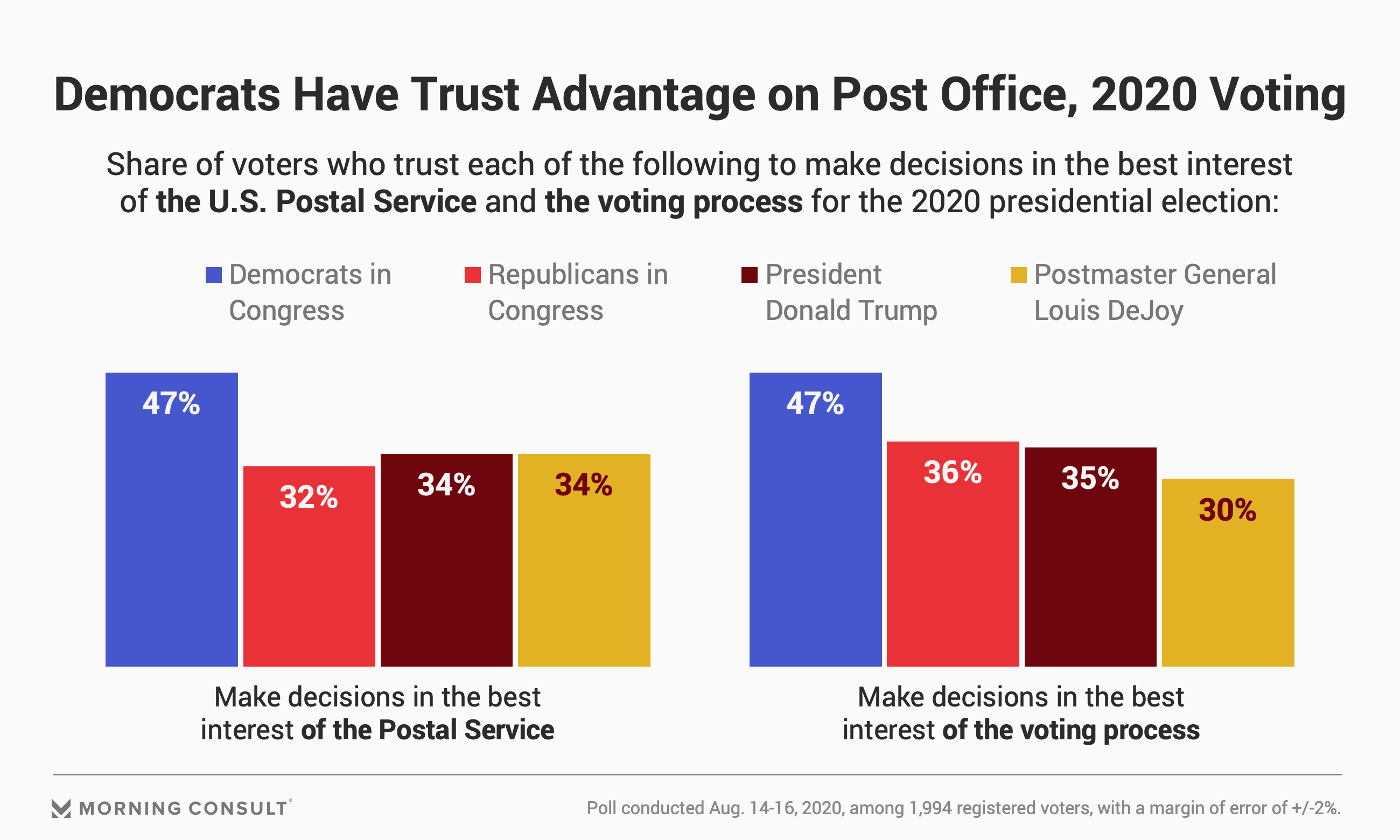 Despite the alarm bells, news of the recent crisis at the Postal Service has not had strong resonance, with about a quarter of the voters, including a third of Democrats, saying they heard “a lot” about the Postal Service’s warning to 46 states and the District of Columbia that it couldn’t guarantee ballots would be delivered in time for counting after the November election. A similar share heard a lot about delivery delays following DeJoy’s changes, including 38 percent of Democrats and 13 percent of Republicans.

But once voters did hear about the issue, they expressed concerns. Three in 4 — including 85 percent of Democrats and 63 percent of Republicans — said they were very or somewhat worried about the warning that ballots would not arrive on time, and 70 percent said the same of the delays.

The House is set to meet for a rare Saturday session to pass emergency funding legislation for the Postal Service, a measure supported by 67 percent of voters, including 79 percent of Democrats and 54 percent of Republicans.