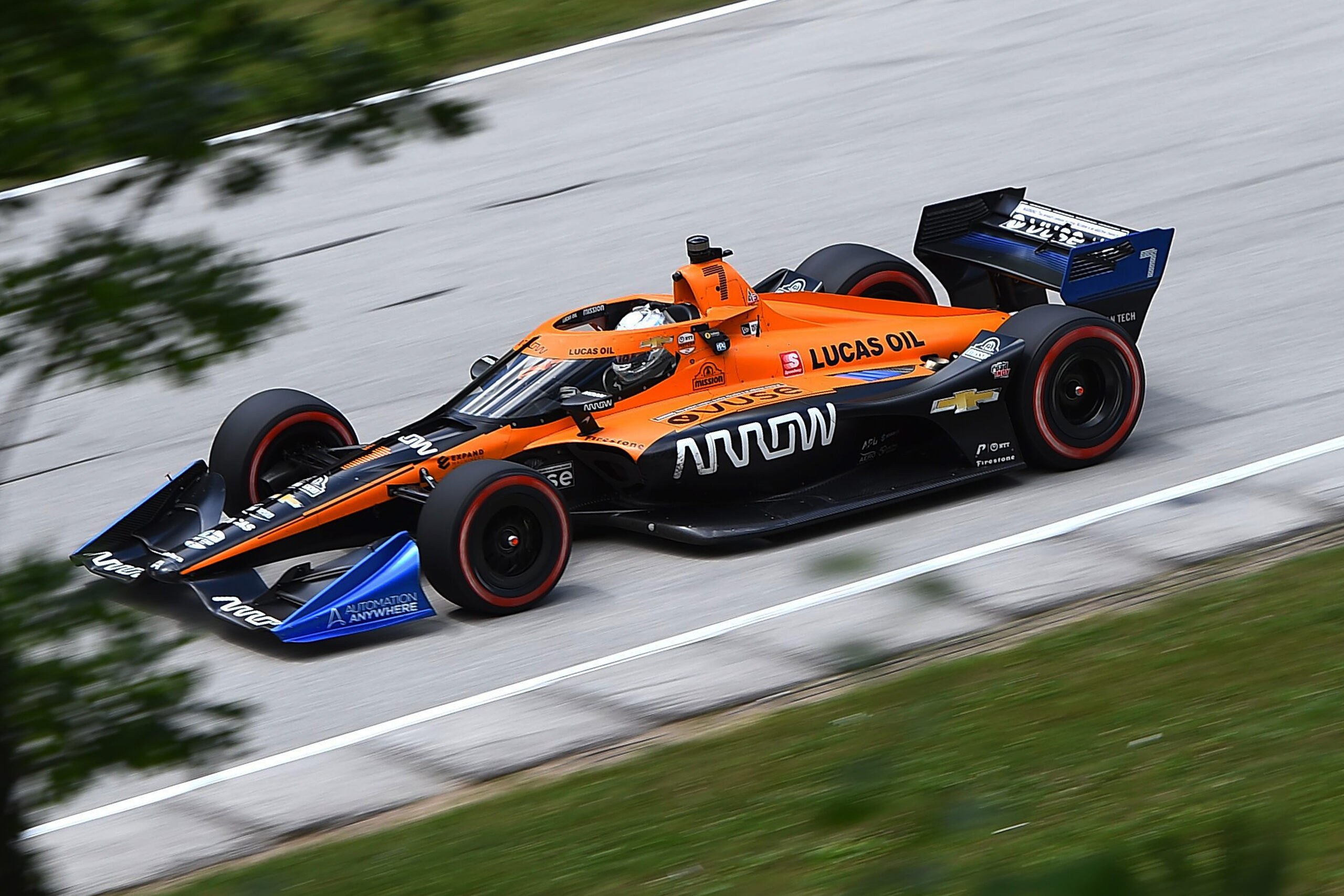 IndyCar racing is a dangerous sport, but that’s not why each of Arrow McLaren SP’s three cars will carry safety warnings at Sunday’s Indianapolis 500.

Rather, the notice will accompany the logo of e-cigarette brand Vuse on the outside of the No. 5, No. 7 and No. 66 cars, alerting the millions of viewers watching on NBC that the product the team is promoting contains nicotine, an addictive chemical.

As the premier event on the IndyCar schedule, the Indy 500 represents one of the largest stages in American sports open to tobacco companies to market their vapor-based alternatives to traditional cigarettes. While leagues such as the NFL, NBA and MLB prohibit teams from taking sponsorship money from tobacco companies, auto racing series IndyCar and NASCAR allow teams to promote e-cigarette brands.

And while the deal between British American Tobacco and Arrow McLaren SP is believed to be the only current e-cigarette partnership in IndyCar or NASCAR, one motorsports marketer who has represented tobacco companies speculated revenue loss related to the coronavirus pandemic might lead more teams to consider taking on sponsors in the vaping category.

“You’re going to see, I would think, a willingness to look at these things more than ever before because these companies do have money, and they’ve got to find additional resources or revenue,” the marketer said. 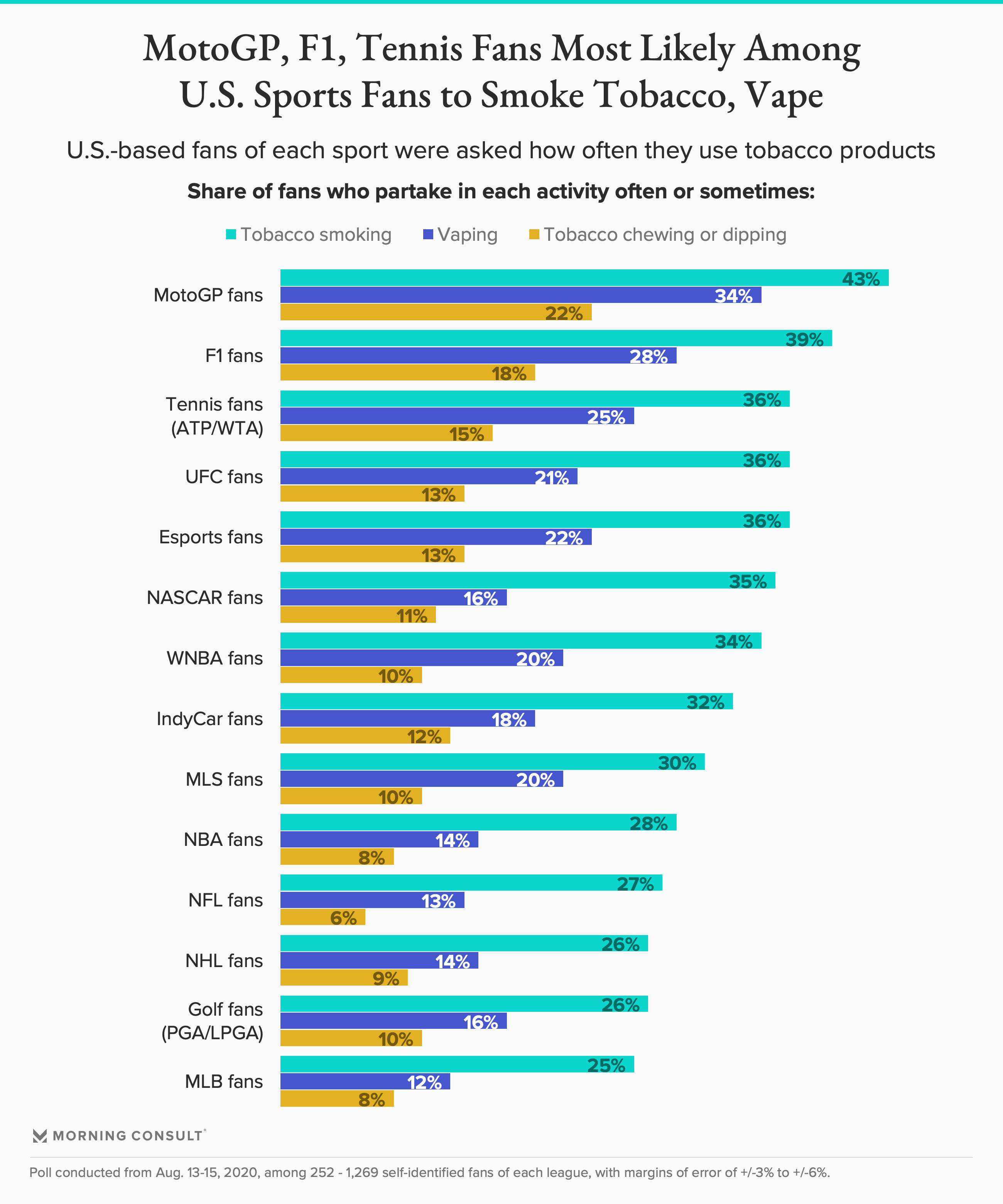 In a Morning Consult poll conducted this month, 67 percent of sports fans said it is inappropriate for companies that sell vaping products to use sports as a promotional platform, only slightly lower than the 70 percent who said traditional cigarette marketing in sports was inappropriate. IndyCar and NASCAR fans are slightly more likely than the average U.S. sports fan to both smoke tobacco and vape either “often” or “sometimes,” but less likely than American fans of international motorsports series like MotoGP and F1.

Vuse, a line of vaporizers and nicotine cartridges produced by Reynolds American Inc., is in its first full season as an IndyCar team sponsor, and its agreement with Arrow McLaren SP is believed to be the only current e-cigarette partnership in IndyCar or NASCAR.

The brand got its feet wet in the sport last season as a part of McLaren’s single-race entry in the Indy 500. When McLaren returned to IndyCar full-time this season, ending a nearly 40-year absence by teaming up with Arrow Schmidt Peterson Motorsports, it brought Reynolds’ parent company, British American Tobacco, along from its U.K.-based Formula 1 team as a corporate partner.

The connection between tobacco companies and motorsports dates back generations. From 1971-2003, Reynolds held the naming rights to NASCAR’s top class, which it called the Winston Cup Series after its popular line of cigarettes. The National Hot Rod Association’s top drag racing series was also named for Winston from 1975-2001. Formula 1 legends from Ayrton Senna to Michael Schumacher racked up championships in cars sporting Marlboro branding under sponsorship agreements with Philip Morris International Inc.

In the late 1990s, governments around the world began passing laws that cracked down on tobacco advertising, including the Master Settlement Agreement of 1998 in the United States. President Barack Obama in 2009 signed the Family Smoking Prevention and Tobacco Control Act into law, further strengthening restrictions.

The advent of new smokeless tobacco and vapor products has opened the door for tobacco companies to get back into both U.S.-based and international motorsports series. British American spent an estimated $20 million with McLaren’s F1 team last year, according to a recent report by Vital Strategies, to promote what the company calls its portfolio of “potentially reduced risk products,” including Vuse vapor products and Velo nicotine lozenges. In December 2019, McLaren and British American expanded the deal to include IndyCar. Terms of the expanded deal were not disclosed.

Vital Strategies estimated Philip Morris spent $75 million on its marketing pact with the Scuderia Ferrari team in 2019. It is believed to be the second-most valuable deal in F1, regardless of category, behind only Malaysian oil company Petronas’ sponsorship of the dominant Mercedes team. Philip Morris is also the primary sponsor of the Ducati team in MotoGP.

While Juul Labs Inc., Reynolds’ chief rival in the U.S. e-cigarette market, markets its products as being an “alternative for adult smokers” after facing congressional and regulatory scrutiny for targeting teens with previous efforts, Vuse has leaned into flashy initiatives built around themes like racing, art, music and fashion.

The page on the Vuse website touting the Arrow McLaren partnership offers potential vapers free racing-themed wraps for their Vuse Alto devices, which themselves cost just 99 cents. The Vuse Vapor U.S. Instagram account features stylized images of the IndyCar team’s liveries and highlights a branded video series called “The Crewlyweds,” which showcases two members of the Arrow McLaren pit crew answering questions in the style of the classic game show, “The Newlywed Game.”

When IndyCar tracks are allowed to host fans again, Vuse said it plans to offer an “Ultimate Pit Stop” experience to adult nicotine consumers at the track, including race simulators and engraving stations for Vuse Alto products. 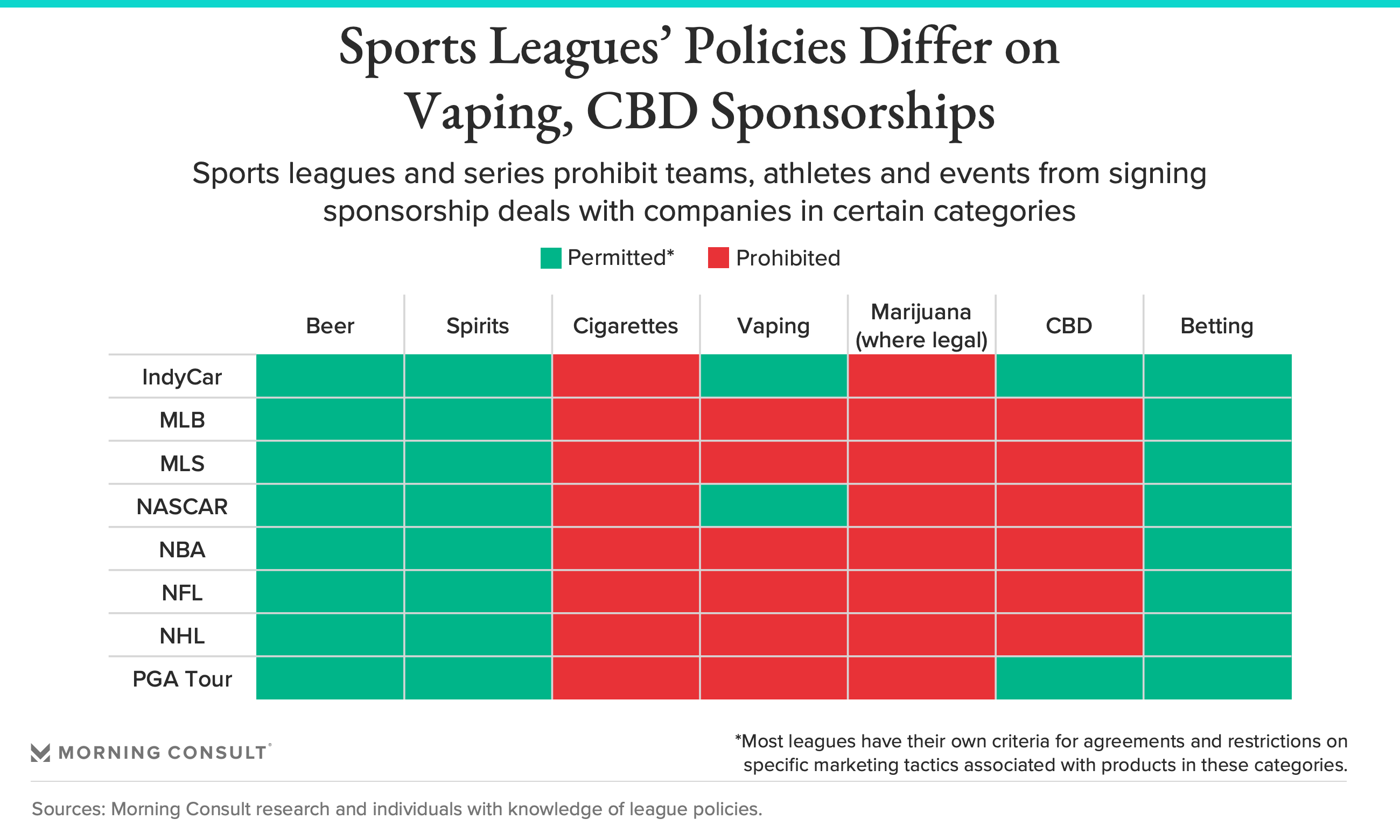 CBD: the next frontier?

In addition to its liberal stance on vaping, IndyCar signed off on one of the first CBD sponsorships in major American sports last year, allowing the Carlin team to partner with the company Craft 1861.

While vaping is viewed as untouchable by many outside of motorsports, decision-makers in stick-and-ball sports seem more receptive to eventually opening the door to CBD, a non-psychoactive cannabis product that advocates claim has a range of health benefits.

The U.S. CBD marketplace accounted for $4.1 billion in sales in 2019, according to Chicago-based cannabis research firm Brightfield Group.

A key barrier is that top-tier sports leagues’ collective bargaining agreements prohibit players from using cannabis products. While that didn’t deter IndyCar — CBD is on the banned substance list for its drivers — most leagues aren’t comfortable promoting something they aren’t willing to let their athletes use.

“As much as I would love to sell as many categories and allow our clubs to sell as many categories to monetize, you start getting into health and well being,” said a top sponsorship executive at a major U.S. sports league. “There’s a whole other part of the organization, including doctors, that look into the effects of that product. And so at this point, we are looking into it, but there’s nothing imminent.”

The PGA Tour allows golfers to promote CBD isolate and broad-spectrum CBD, which is legally cleared to market as being free of THC, the psychoactive component in cannabis. Sports Business Daily cited sources last month as saying that MLS is “likely” to approve commercial opportunities involving CBD by the end of the year. 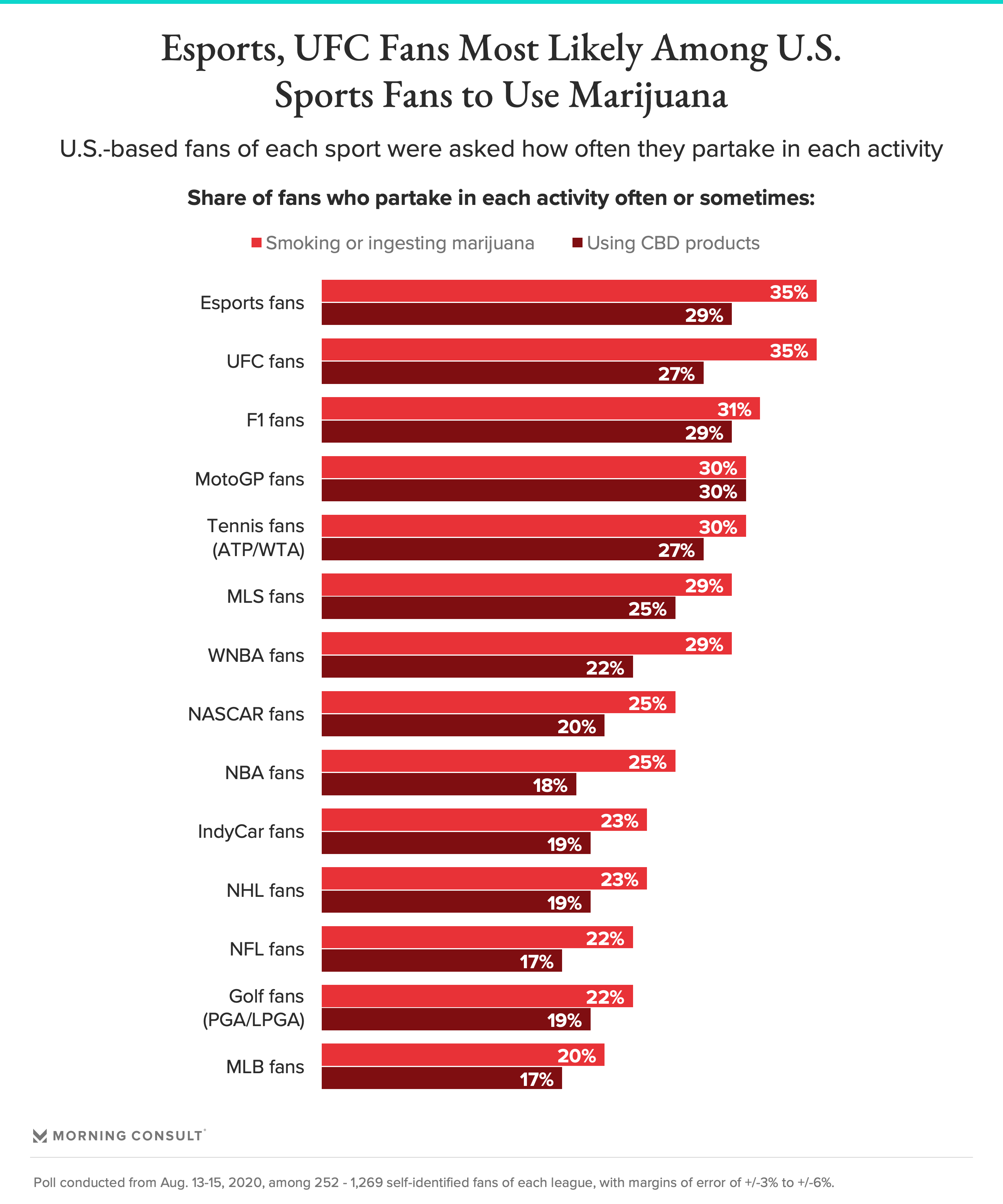 In the Aug. 13-15 Morning Consult survey, 48 percent of sports fans said it is inappropriate for sellers of CBD products to use sports as a marketing platform. Fans of MotoGP, esports, F1 and UFC were the most likely groups to use CBD products.

Despite marijuana being legal in 11 states, its classification as an illegal Schedule I drug by the United States government is a non-starter for the leagues. While some properties might be reluctant to associate with marijuana regardless of its legal status, the quick rush of leagues and teams to do business with betting companies following the Supreme Court’s 2018 reversal of the Professional and Amateur Sports Protection Act showed how quickly taboos can change.

The Morning Consult survey polled between 252 and 1,269 self-identified fans of each sport, with margins of error ranging from 3 to 6 percentage points.