Biden Gets No Immediate Convention Bounce, but Still Leads Trump

Former Vice President Joe Biden delivers his acceptance speech on the fourth night of the Democratic National Convention on Aug. 20. New polling shows the Democratic presidential nominee did not gain any measurable support in the immediate aftermath of the convention, though at 52 percent support among likely voters, he remains in a stronger position against President Donald Trump than Hillary Clinton was four years ago. (Win McNamee/Getty Images)
By Eli Yokley

A new Morning Consult poll of 4,377 likely voters conducted Friday found Biden leads Trump by 9 percentage points, 52 percent to 43 percent, statistically unchanged from a Monday survey of 4,141 likely voters, when he led the president by 8 points. Monday’s responses have a 2-point margin of error and the Friday poll has a 1-point margin of error. 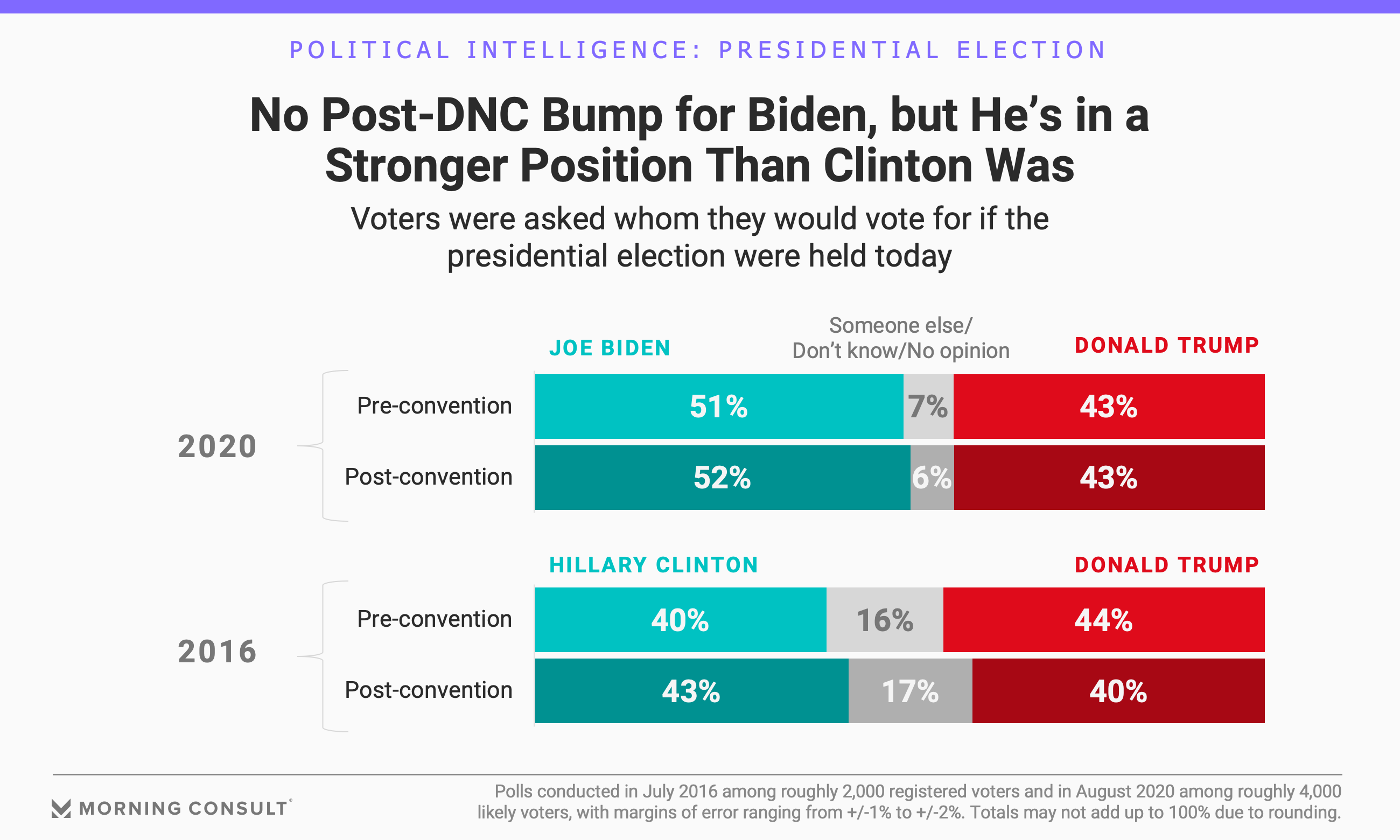 Despite the lack of movement, Biden is in a significantly more commanding position coming out of his party’s gathering than Hillary Clinton was four years ago following the Philadelphia convention, when Morning Consult polling of registered voters found many more were undecided.

Following the four-night commercial that emphasized Biden’s personal characteristics and bipartisan bonafides over his policy preferences, likely voters’ views about the Delawarean improved to their best point this year, building a solid foundation ahead of Republicans’ coming work to tear it down next week. Compared to Monday, the share with favorable opinions of Biden rose 3 points, to 51 percent — a single-day high in Morning Consult polling — while the share with unfavorable views fell by the same amount, to 45 percent.

Nielsen data found television viewership of the Democratic National Convention down roughly 18 percent from 2016, to an average of 21.6 million each night, according to The New York Times. And, it largely preached to the choir: left-leaning MSNBC drew more eyeballs during the convention time slot than the conservative favorite, Fox News.

Biden’s remarks on Thursday were seen by 24.6 million on television, according to Nielsen.

Biden’s campaign said Friday that 85.1 million people watched the convention across television networks, while 35.5 million watched online. On digital platforms, convention content made 564 million impressions, the Biden campaign said, leading in part to a $70 million fundraising haul during the week ahead of Trump’s convention.