Across demographics, voters less likely to support extraction on public lands when prompted to consider ANWR

After the Trump administration finalized a plan to allow oil leasing in the Arctic National Wildlife Refuge (pictured above in an undated photo), a new Morning Consult poll found that 43 percent oppose drilling on federal and public lands, up from 28 percent in 2014. (U.S. Fish and Wildlife Service/Getty Images)
By Lisa Martine Jenkins

In the six years since Sen. Lisa Murkowski (R-Alaska) took the helm of the Senate Energy and Natural Resource Committee, voters have not been swayed by her enthusiasm for opening public lands — and especially her home state’s Arctic National Wildlife Refuge — to oil and gas drilling, new Morning Consult data shows.

A poll conducted Aug. 18-20 shows that voter support for opening public and federal lands to fossil fuel leasing has plunged to 38 percent from 61 percent in 2014. Opposition is up to 43 percent (from 28 percent), leaving net support underwater.

The two polls surveyed 1,811 and 1,992 registered voters, with margins of error of 2.3 and 2 percentage points, respectively. 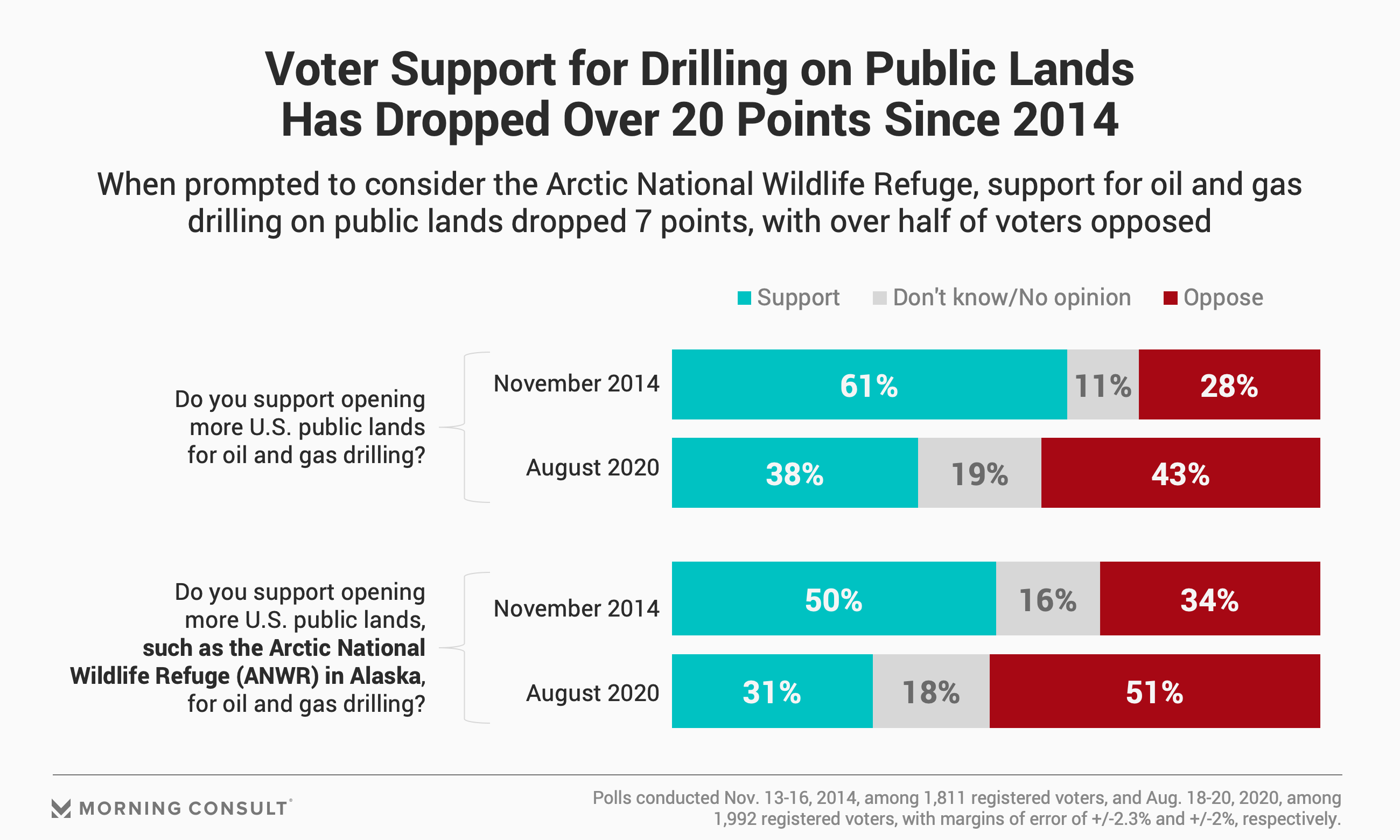 Last week, the Trump administration approved oil leasing in the Arctic National Wildlife Refuge, a long-awaited decision that Murkowski made her own personal mission in the Senate. In doing so, she followed the lead of her father, former Alaska Gov. and Sen. Frank Murkowski, who tried to pass legislation to open up the ANWR to drilling, as well, before then-President Bill Clinton vetoed the bill in 1995. In 2017, the GOP-controlled Congress succeeded in mandating that the government lease oil rights in part of the refuge, though it took until last week for the Interior Department to approve a concrete plan for doing so.

While the refuge as a whole covers 19 million acres in northeastern Alaska, at issue is primarily 1.5 million acres of the region’s coastal plain, where the continent’s largest onshore oil reserves are believed to be located.

The Aug. 17 decision has been met with ire and skepticism from stakeholders on both sides of the decision. Environmentalists have lamented the potential destruction of the refuge’s remote coastal plain, which is home to polar bears and Porcupine caribou herds. On Aug. 24, more than a dozen environmental and Indigenous groups sued the Trump administration over the plan, saying it would cause the ecosystem irreparable damage.

And those in industry would have to get around the fact that many major banks — including Morgan Stanley, Goldman Sachs Group Inc., JPMorgan Chase & Co. and Wells Fargo & Co. — have refused to lend to projects that would drill in the region.

Furthermore, it is possible opening the ANWR to oil leasing would be met with nonexistent demand from both companies and consumers. Oil prices have increased slightly since the start of the coronavirus pandemic, but remain low, which would limit the ultimate value of the ANWR resources; already, the industry is scaling down its exploration for new oil . The International Energy Agency expects demand for oil to stay below supply for the rest of 2020.

This lack of enthusiasm is echoed by voters. When prompted to consider the ANWR specifically as an example of public land that could be opened to oil and gas leasing, voters’ opposition jumped to 51 percent, with 31 percent in support. The new survey data represents almost an exact reversal of voter attitudes in 2014, when half of voters were in support and 34 percent were opposed. 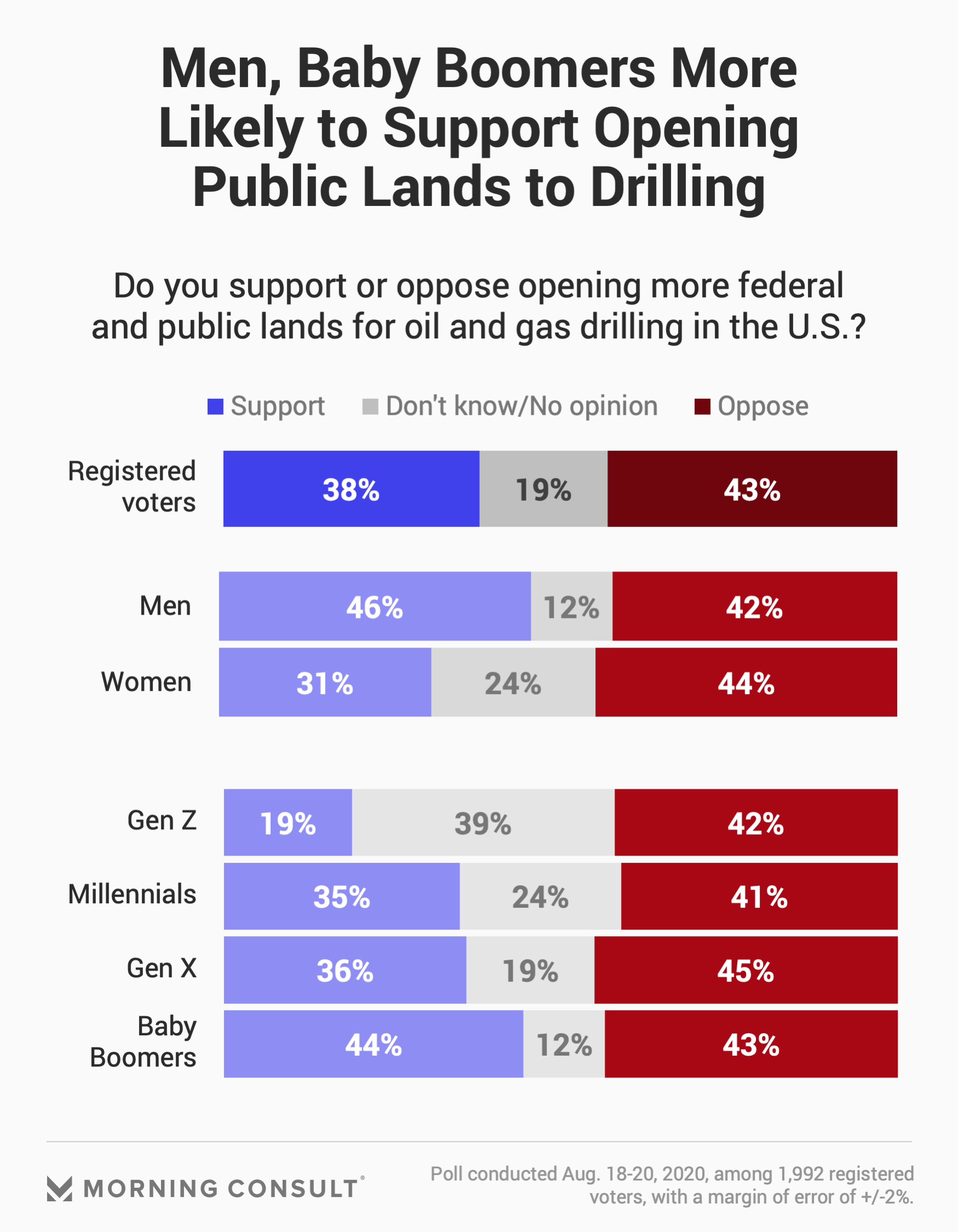 On the topic of drilling more generally, the poll found that women and young adults were the least likely to express support. Thirty-one percent of women and 46 percent of men said they would support opening public lands to drilling.

Gen Z adults were the generational cohort least likely to back the proposition (19 percent), and baby boomers were the most likely (44 percent).

While Interior Secretary David Bernhardt said the program’s approval will allow for auctioning the rights “right around the end of the year,” many expect the decision to remain tied up in lawsuits, meaning industry may not see a conclusion on the ANWR until the next presidential term at least.

Whether or not the region actually sees extraction, therefore, is among the countless questions that will likely be decided in the general election on Nov. 3.

This story has been updated with mention of the lawsuit against the Trump administration’s Arctic National Wildlife Refuge plan.