President Donald Trump speaks in the Oval Office before signing an executive order related to regulating social media on May 28, 2020, in Washington, D.C. (Doug Mills-Pool/Getty Images)
By Sam Sabin

As Washington continues to hammer large technology companies for their perceived market power and business practices, Americans are slowly but surely starting to get on board with presidential candidates taking on Silicon Valley.

According to a new Morning Consult/Politico survey, 45 percent of adults want presidential candidates to be more critical of the technology industry, up 5 percentage points from an August 2019 survey that asked the same question. That slight growth is also seen among Democrats and Republicans: 48 percent of Democrats and 49 percent of Republicans now want candidates to be more critical of the industry — 6- and 5-point jumps, respectively, from last year.

However, GOP adults view criticizing the tech industry as a slightly higher priority than Democrats and all respondents. Among Republicans, tech ranked eighth on a list of 15 industries that presidential candidates should scrutinize more, compared to the industry’s No. 11 ranking among all adults and No. 10 among Democrats. Last year, GOP adults ranked the industry 11th. 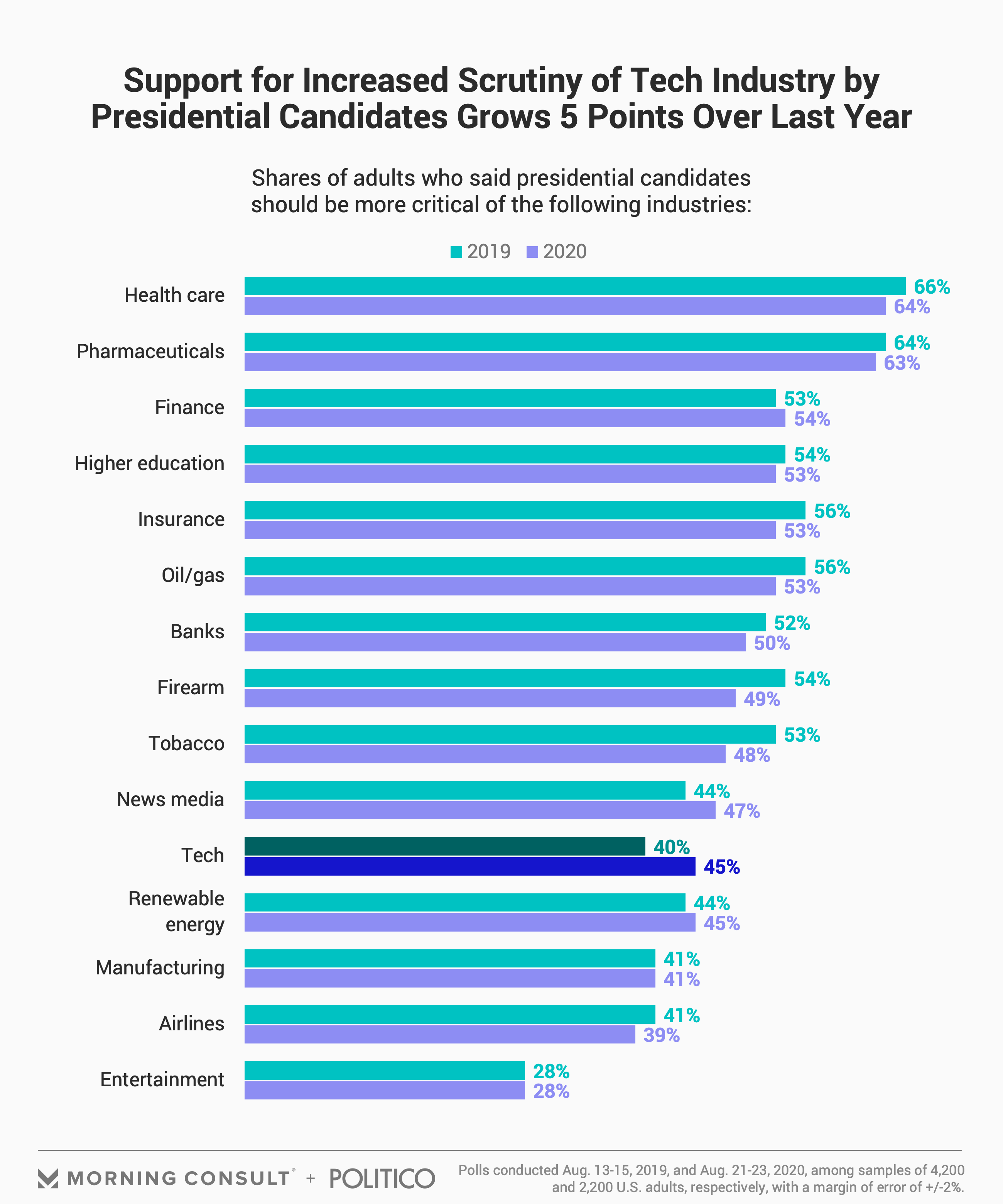 Throughout the 2020 election cycle, President Donald Trump and former Vice President Joe Biden have attacked large technology companies on accusations of anti-competitive practices and the perceived biases fueling content moderation policies, underscoring the souring relationship between the tech industry and Washington over the past decade. For instance, Trump has continuously spoken out about how social media networks flag posts of his that violate the platform’s content moderation policies, while Biden has called for the complete revocation of Section 230 of the Communications Decency Act, which affords liability protections to online platforms.

Matt Hill, the Biden campaign’s deputy national press secretary, said in a statement in response to the survey data that a Biden presidency would put an end to the “abuse of power” practiced by many technology giants and their leaders.

“Many technology giants and their executives have not only abused their power, but misled the American people, damaged our democracy, and evaded any form of responsibility,” Hill said. “That ends with a President Biden.”

The Trump campaign did not respond to a request for comment. 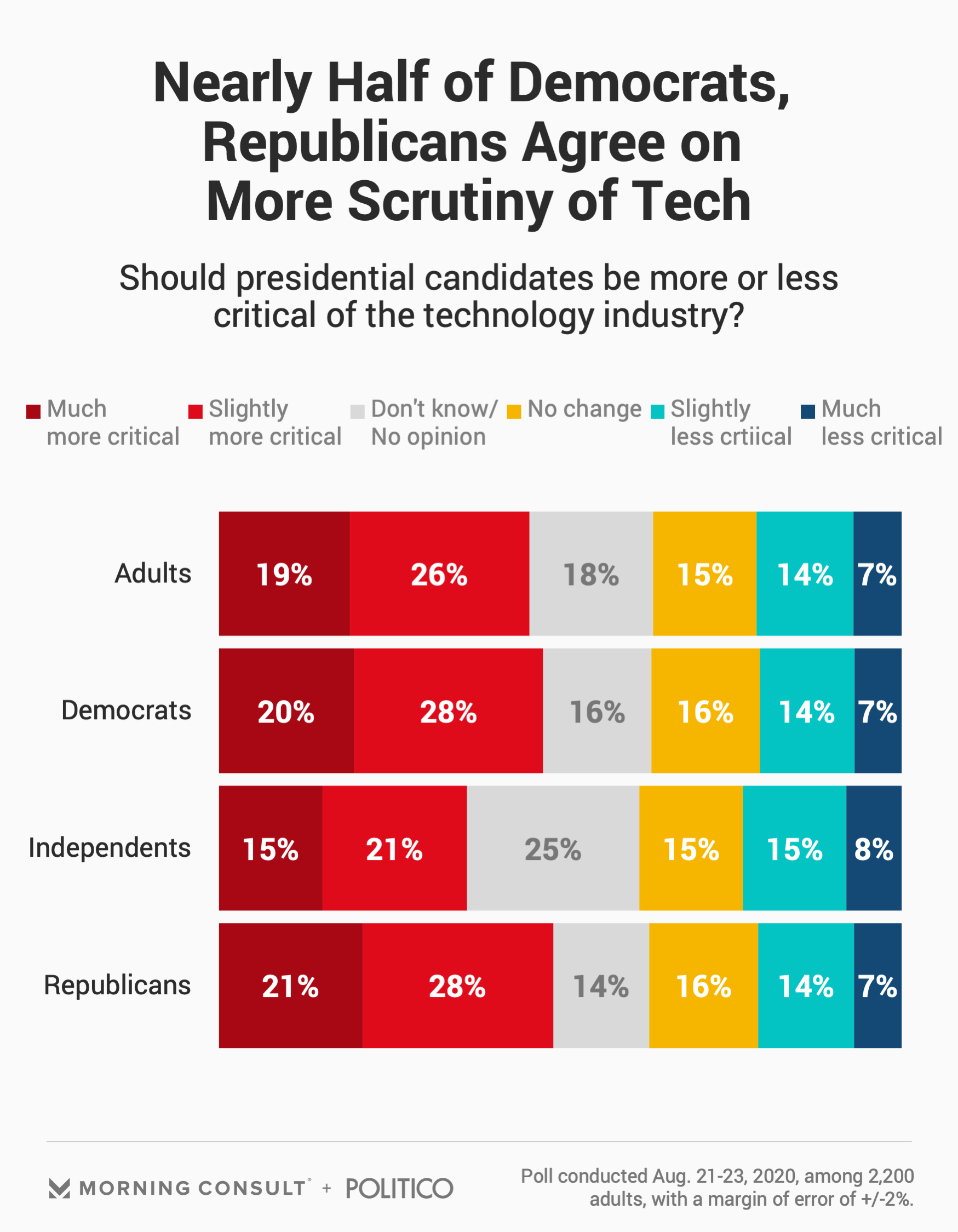 Ethan Porter, an assistant professor of media and public affairs at George Washington University whose research focuses on public opinion and political communication, said the industry rankings are picking up not only on what adults want candidates to rail against, but also issues that voters themselves have become most critical.

However, part of this could also be influenced by politicians, Porter said, adding that many voters respond to issues political leaders choose to aim their focus.

Eric Wilson, a Republican digital strategist who has worked on several campaigns, including those for Sen. Marco Rubio’s (R-Fla.) 2016 presidential run and the National Republican Senatorial Committee, said the slow growth among adults who want candidates to be more critical of the tech industry makes sense given how new the industry is relative to others included in the survey.

“It’s not something like health care or taxes that people have had a lifetime to form opinions on,” Wilson said.

While Wilson said most Americans tend to appreciate the benefits that come from large technology companies, including the convenience and connections formed, they’re also starting to become increasingly concerned about how the power of the industry impacts the information and news they consume.

Among Republican voters, scrutiny of the tech industry appears to go hand-in-hand with their judgment of the news media, which ranked No. 1 among the GOP, with 67 percent saying they wanted candidates to be more critical of the industry. In part, this is because of how closely linked Republican complaints about both industries are: Both social media and the news industry are seen as practicing some sort of anti-conservative bias.

“Criticism of tech is like the modern-day cousin of criticism of media bias,” Porter said.

And as the presidential race enters its last stretch before the November election, how companies exercise enforcement of their content moderation policies will be key in determining what role scrutiny of the tech industry will play in the campaigns of both Trump and Biden.

The companies “have been very aggressive and active in changing their policies and playing referee in this campaign,” Wilson said. “If anything, they’re going to reinsert themselves in this campaign and force the candidates to address the issue.”

Related: Washington Is Cracking Down on TikTok. Some Democratic Campaigns Still See Its Value
Tech Regulation