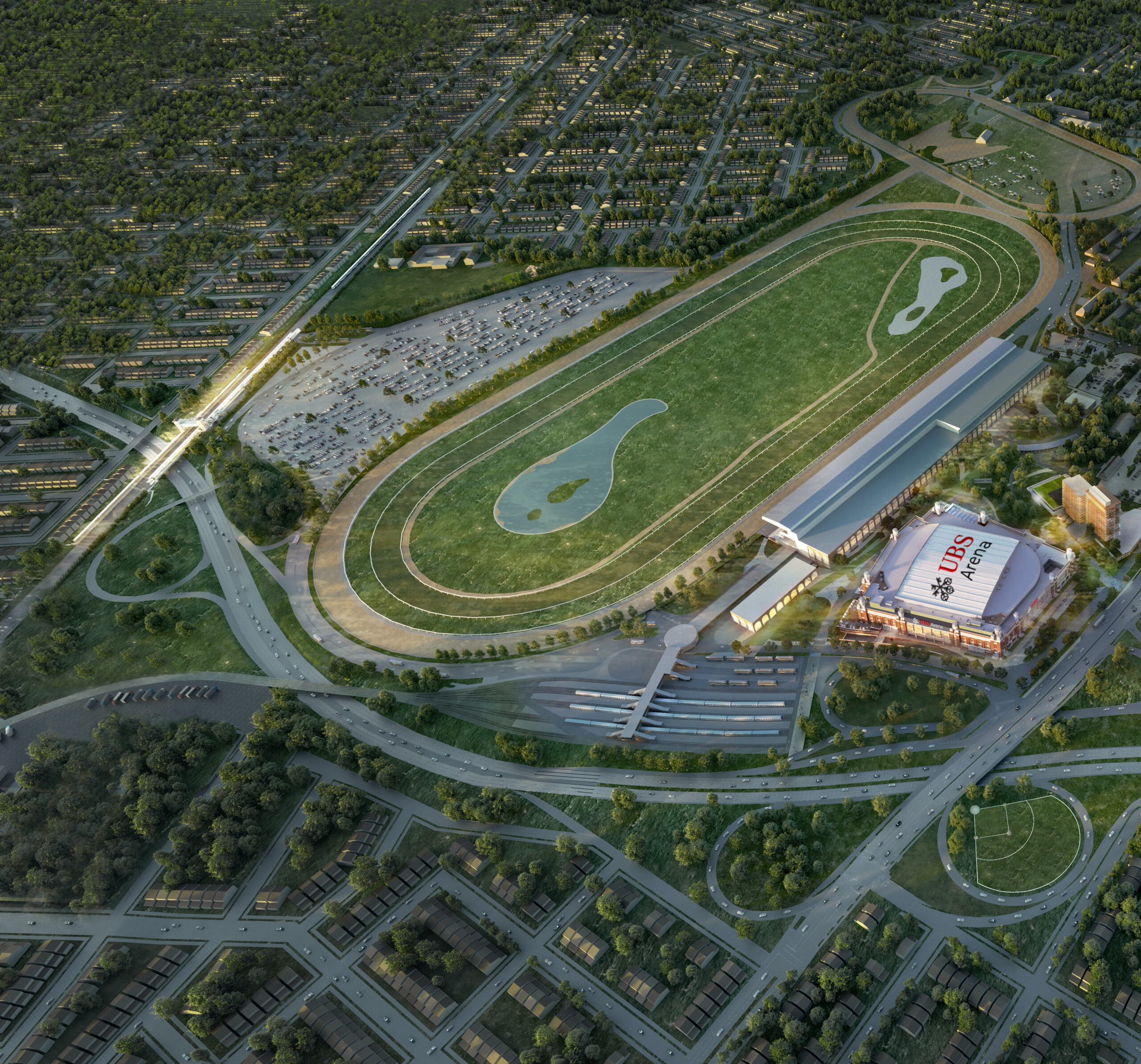 A rendering of an aerial view of the UBS Arena in Belmont Park, N.Y., expected to open for the 2021-2022 National Hockey League Season. (Image provided by UBS Arena)
By Alex Silverman

The New York Islanders announced Monday that the team has sold 80 percent of available season tickets for the 2021-2022 season, set to be the team’s first in its new home at Belmont Park. While strong sales for the surging Islanders is good news for the owners of UBS Arena, the success of the $1.5 billion facility also depends on its ability to deliver premier non-hockey acts throughout the year — and on having consumers who are able and willing to return to large-scale events. 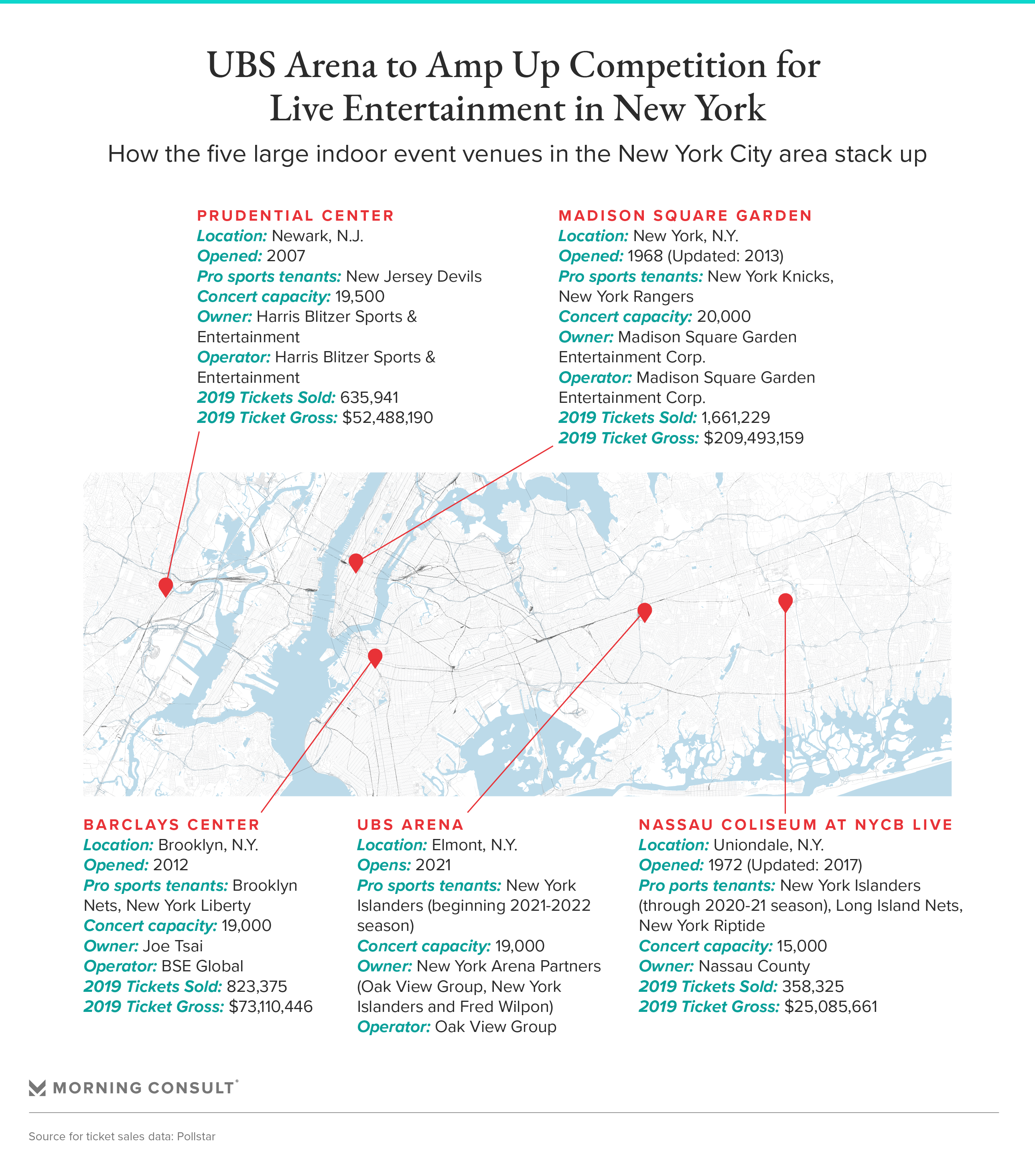 UBS Arena will be the fifth indoor facility in the New York City metropolitan area with a capacity of between 15,000-20,000 for concerts, and is located within 15 miles of three of the other four, as the crow flies. With Madison Square Garden, Barclays Center, Prudential Center and the Nassau Coliseum all sitting empty amid the coronavirus pandemic, arena operators will be more motivated than ever to fill as many dates as possible to make up for lost revenue.

Tim Leiweke, CEO of arena developer and operator Oak View Group, expects the live entertainment sector to benefit from “pent-up demand” once large gatherings are permitted again, forecasting that the second half of 2021 has the potential to be a historic one for the industry. That timing coincides with the scheduled opening of UBS Arena.

The sports and entertainment industry veteran said the new Long Island space is well-positioned to be “one of the busiest music venues in the world,” based both on OVG’s scale and clout in the live entertainment sector and the arena’s artist-friendly design.

In addition to being an equity partner in UBS Arena via a joint venture with the Islanders and Mets co-owner Fred Wilpon, OVG also counts Madison Square Garden and Prudential Center as members of its Arena Alliance. The network of 29 independent facilities, each of which pays a reported six-figure fee annually to participate, benefits from its members’ collective scale and OVG’s established connections — including those of music mogul Irving Azoff — to attract major events and sponsorships. 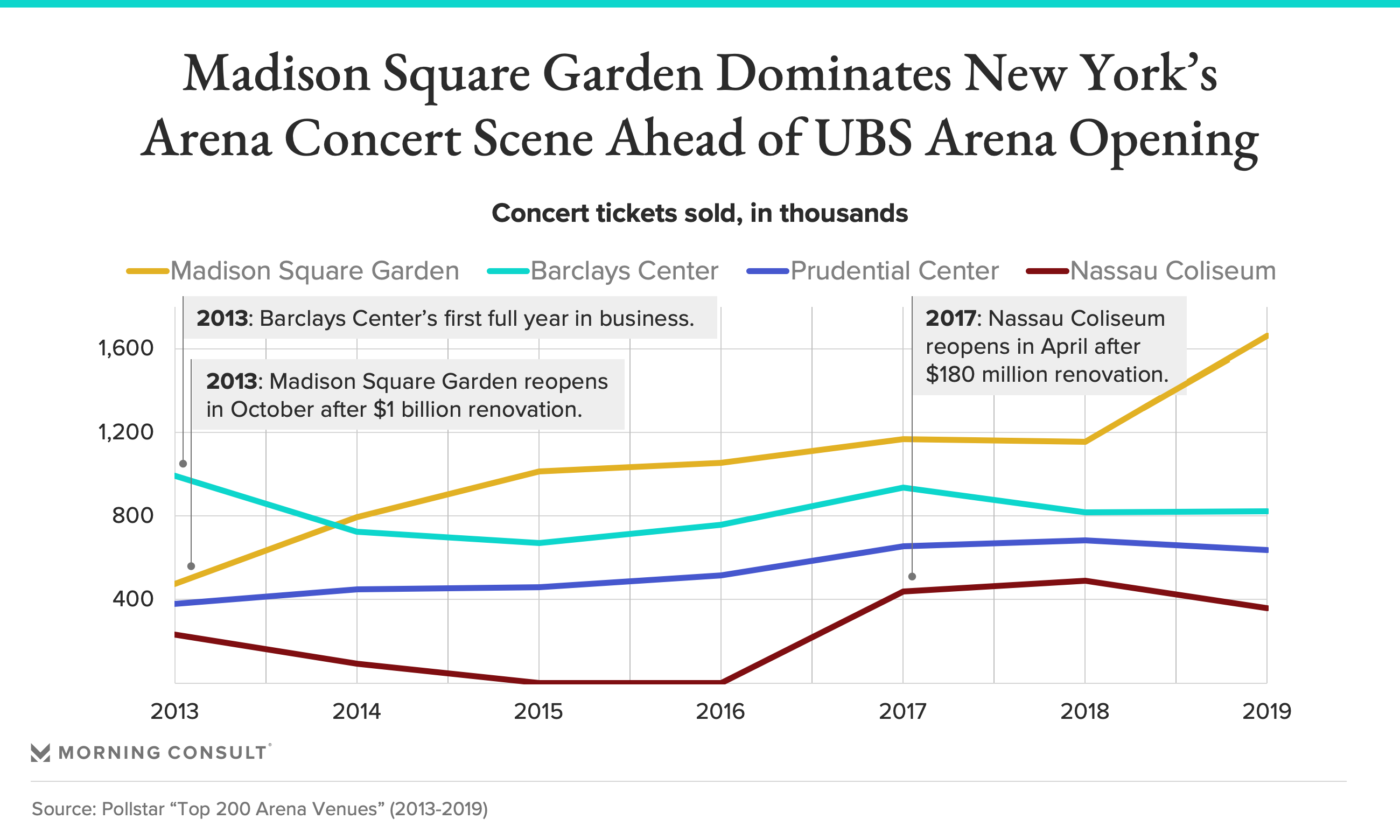 While their membership in the alliance doesn’t preclude the facilities from competing for marquee attractions, the three OVG-affiliated arenas — particularly MSG and UBS Arena — are expected to work together on “block booking” arrangements that will see major artists play shows at more than one venue in the area. The Garden — which according to Pollstar sold 1.66 million tickets and grossed more than $201 million last year, making it the most popular and successful arena in the world — will always be the top dog in the market based on its prestige and history. But Leiweke doesn’t see that as a threat to UBS Arena because of their ability to book collaboratively.

He added that Prudential Center, located in Newark, N.J., is focused on catering to an adjacent but separate New Jersey market and isn’t necessarily in competition for acts with the other four facilities. Prudential Center owner and operator Harris Blitzer Sports & Entertainment did not offer comment in time for publication.

Dennis Arfa, whose New York-based booking agency Artists Group International represents more than 200 acts, including the region’s favorite son, Billy Joel, believes the opening of another arena in the market will force facility operators to make deals beneficial to performers in order to secure top talent.

He agreed that MSG has a leg up on the four other arenas, but doesn’t think there’s a clear-cut No. 2.

“Madison Square Garden is the most prestigious building. It’s where the press comes, it’s certainly the most well-known and has its cachet over any building in the area,” he said. “Everybody else, welcome to the crapshoot.”

Leiweke identified Brooklyn’s Barclays Center as the facility that UBS Arena is most likely to go head-to-head against for events. While BSE Global operated both Barclays Center and Long Island’s Nassau Coliseum under previous ownership, it is now a one-arena operation under the purview of Brooklyn Nets owner Joseph Tsai.

“Barclays and us will be competitive,” Leiweke said. “At the end of the day, that’s probably one where we will fight for content.”

BSE Global didn’t respond to requests for comment on how the UBS Arena’s entry to the market will impact its business.

“Brooklyn’s not that far from Belmont,” Arfa said. “So will a lot of artists play both those venues? I doubt it.”

As for Nassau Coliseum, which despite its recent $180 million renovation lacks the modern amenities of the other four facilities, the future is murky. The building shut down earlier this year when Onexim Sports and Entertainment, owned by Russian billionaire and former Nets owner Mikhail Prokhorov, walked away from its lease with Nassau County. Just last week, the county announced it had reached a deal with Florida-based developer Nick Mastroianni II to take over control of the Coliseum’s lease, but little is known about future arena programming beyond the Islanders’ 2020-21 season and the NBA G-League’s Long Island Nets. Mastroianni did not respond to a request for comment.

Leiweke said he expects UBS Arena to “take all of the concerts away” from Nassau Coliseum because of its close proximity within Nassau County and the new facility’s larger capacity and modern amenities. Oak View Group has proposed a project that would see the company invest in turning the Coliseum into a 5,000-8,000 seat theater for smaller events, but it is unclear whether Mastroianni and the county are interested.

In designing UBS Arena, Leiweke and Islanders co-owner Jon Ledecky said they met with management for prominent touring acts to create a more amenable “back of house” setup. They touted an easier load-in, load-out configuration than venues like MSG and Barclays Center, both of which are located in dense urban areas that limit the number of trucks that can be loaded and unloaded at a time.

In addition, Leiweke noted that the Belmont arena features more lower-bowl seats than any other arena in the area, which artists can sell for higher prices and, as a result, produce higher gross revenue per show.

“We tried to think about how we create a building where an artist can take out substantially more money every night, and we don’t have to get into a rate card war with the other buildings,” Leiweke said.

While Arfa acknowledged the benefits of a higher gross, he said artists’ decisions will come down to which facility is willing to make the best deal.

“Someone else may make up the difference and say, ‘Here, I’ll give you the extra money to play my building,’” Arfa said. “So, that’s why I say it’s not necessarily what you can gross, it’s what you can walk out of there with.”

Earlier this month, Ledecky began hosting members of the media, potential sponsors and suite holders at a “preview club” in Manhattan’s Flatiron District, designed to capture the “Old New York” aesthetic of the arena being built 15 miles away. But amid the optimism and excitement for a new era in the Islanders’ new home, Ledecky acknowledged that whenever the moratorium on live events is lifted, he and his partners will need to make fans feel safe. An Aug. 21-23 Morning Consult survey found that 13 percent of U.S. adults would feel comfortable going to a concert right now.

“We have to create an environment where everybody wants to come back to the arenas and see live events again,” he said.