President Donald Trump raises a fist in front of family members after delivering his acceptance speech for the Republican presidential nomination on the South Lawn of the White House on Thursday. A new Morning Consult poll conducted on Friday found the president clawing into Democratic nominee Joe Biden's lead, turning a deficit of 10 percentage points into a 6-point margin. (Chip Somodevilla/Getty Images)
By Eli Yokley

President Donald Trump needed a convention bounce — and he got one, emerging from the Republican National Convention with an improved standing against Democratic presidential nominee Joe Biden, fueled by gains among white voters and those in the suburbs, though he still trails the former vice president nationwide.

A new Morning Consult poll conducted Friday that asked 4,035 likely voters which candidate they would pick found Biden leading Trump by 6 percentage points, 50 percent to 44 percent. It marked a 4-point improvement from his standing heading into the convention on Aug. 23, when Biden led 52 percent to 42 percent. Friday’s poll had a 2-point margin of error, compared with a 1-point margin of error for responses gathered among 4,810 likely voters on Aug. 23. 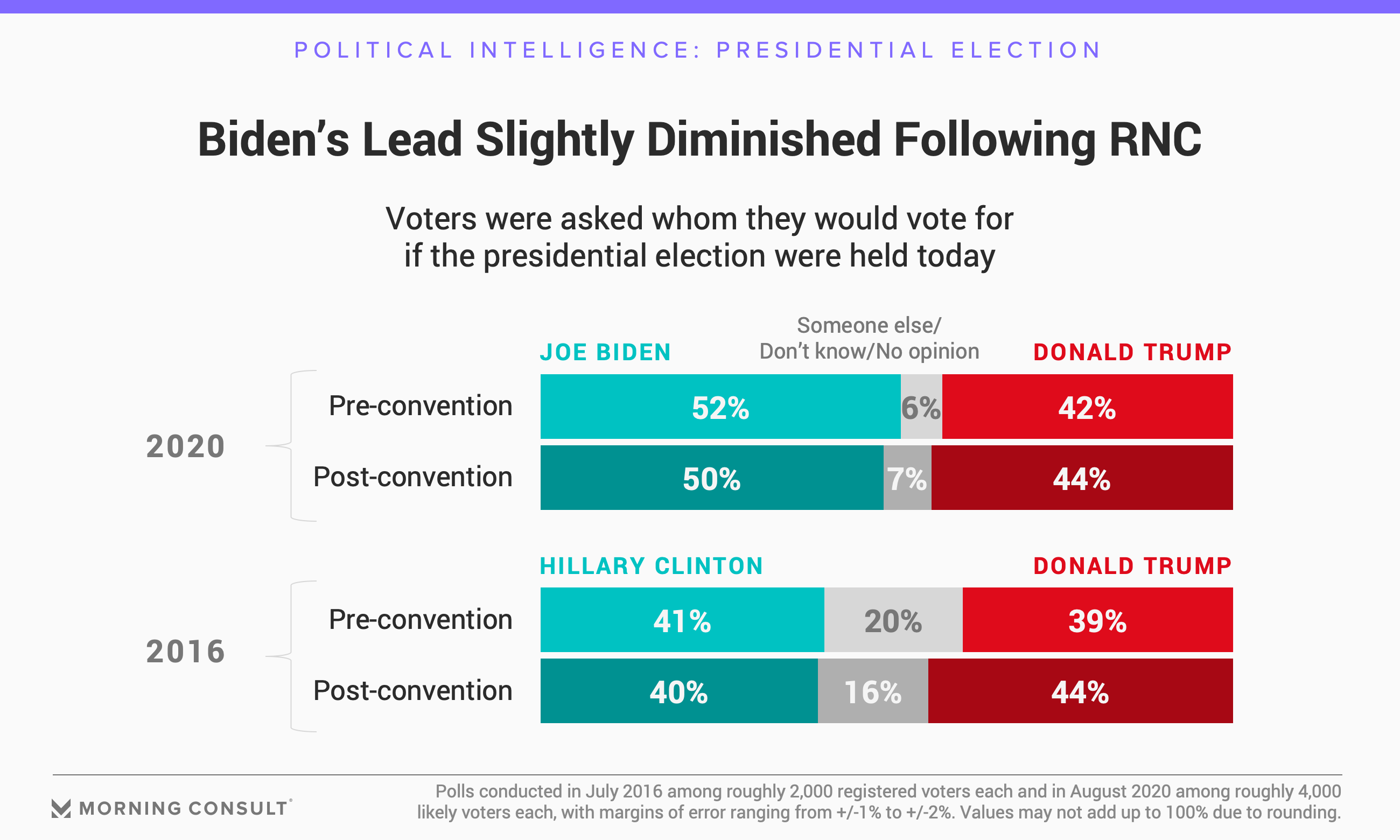 The movement stands in contrast to voters’ reaction to the Democratic National Convention held the previous week, when Biden’s lead over Trump went statistically unchanged, and harks back to the bump in support that Trump saw after the 2016 Republican National Convention. However, due to a smaller share of undecided voters, Biden, who continues to have about half of the electorate’s support, remains in a significantly stronger position than Democratic nominee Hillary Clinton was four years ago.

The poll results come after a convention that was less watched than the Democratic National Convention a week before. According to The New York Times, an average of 19.4 million people watched the Republican gathering each night on live TV, compared to 21.6 million who watched the DNC; Trump’s acceptance speech was viewed live by 23.8 million, less than Biden’s 24.6 million the week before.

The four-day event, held mostly in Washington and capped off by a Trump speech to a crowd of supporters on the White House lawn, painted a picture of Trump’s successes and strength following a week in which Democrats cast the incumbent as a failed leader, based largely on his handling of the coronavirus pandemic. The president and his allies also sought to claim the mantle of the party of law and order and a last line of defense against a creeping radical socialism from the Democratic Party, messaging largely aimed at white people and suburbanites, who will be key for the president in order to win in November.

Trump also improved his margin among white voters, leading Biden 51 percent to 43 percent on Friday compared with a 2-point edge earlier in the week. That included a 6-point gain in his advantage among white voters without a college degree, among whom he leads 57 percent to 36 percent.

At the same time, Trump left the convention with a slightly worse standing among voters of color, trailing Biden by 28 points among Hispanic voters (33 percent to 61 percent) and 74 points among Black voters (9 percent to 83 percent).

Despite some improvement in the head-to-head numbers for Trump, the Republican convention did not improve voters’ perceptions about Trump as the Democratic convention did Biden’s. A majority of voters (55 percent) continue to view him unfavorably, while 43 percent view him favorably.

But the event does appear to have diminished voters’ record-high views of Biden, whose favorability rating fell from 51 percent to 49 percent and was paired with a 1-point increase in unfavorable views, from 46 percent to 47 percent.