President Donald Trump looks on as FDA Commissioner Stephen Hahn addresses the media on the agency's emergency use authorization for convalescent plasma as a COVID-19 treatment, during a press conference at the White House on Aug. 23, 2020. (Pete Marovich/Getty Images)
By Gaby Galvin

As the Food and Drug Administration finds itself embroiled in controversy over its handling of a newly authorized COVID-19 therapy, 28 percent of U.S. adults say they believe the agency’s decisions on potential coronavirus treatments and vaccines are politically influenced, new Morning Consult polling shows. 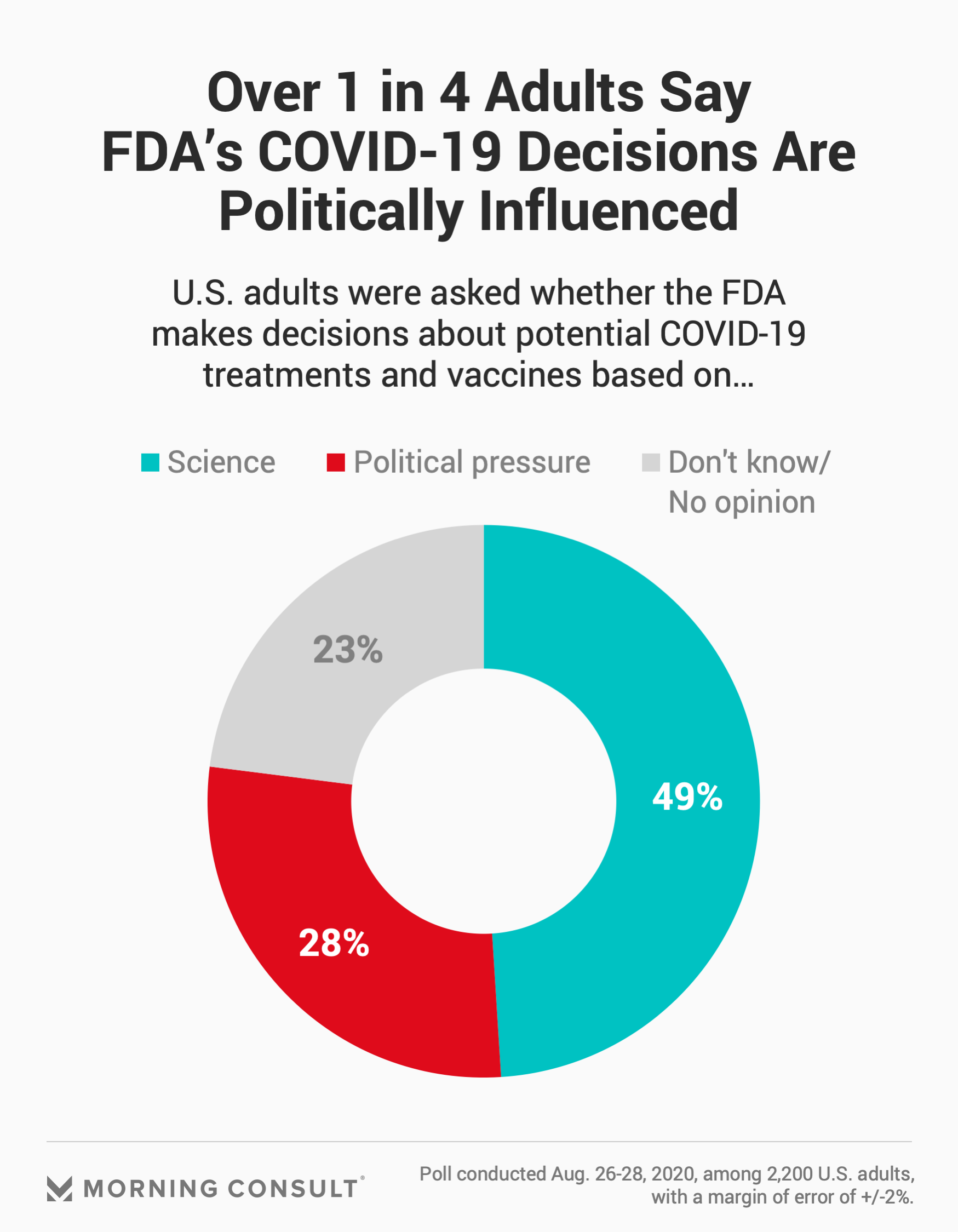 The share of people who think politics plays a role in the FDA’s COVID-19 rulings is lower than the 49 percent who said they believe science drives those decisions, according to the survey, but reflects a “disturbing emergence of distrust” in a federal health authority charged with regulating drugs, said Dr. Arthur Caplan, who heads the Division of Medical Ethics at New York University’s School of Medicine.

Another 23 percent of adults didn’t know or had no opinion on whether science or political pressure played a role in the FDA’s coronavirus decisions, according to the survey, conducted Aug. 26-28 among 2,200 adults with a margin of error of 2 percentage points.

The results come little more than a week after FDA Commissioner Stephen Hahn received scrutiny over the rollout of an emergency use authorization for convalescent plasma, in which he misrepresented its effectiveness as a treatment for COVID-19 during a White House press conference. Though Hahn corrected himself the next day, Democrats and some public health experts pointed to the incident, as well as the agency’s flip-flopping on hydroxychloroquine earlier this year, as evidence that the FDA has relented to pressure from President Donald Trump to show the administration has made headway against the virus in time for the presidential election.

“Reputations are built slowly and lost quickly,” said Daniel Carpenter, a professor of government at Harvard University who studies the FDA. The recent events represent a “low point for the FDA in a generation.”

The lack of a partisan divide among the public has not carried over to federal lawmakers. This week, Senate Democrats called on Hahn and Dr. Robert Redfield, director of the Centers for Disease Control and Prevention, to testify on “undue political influence” on their agencies by the White House, claims both Hahn and Redfield have emphatically denied. 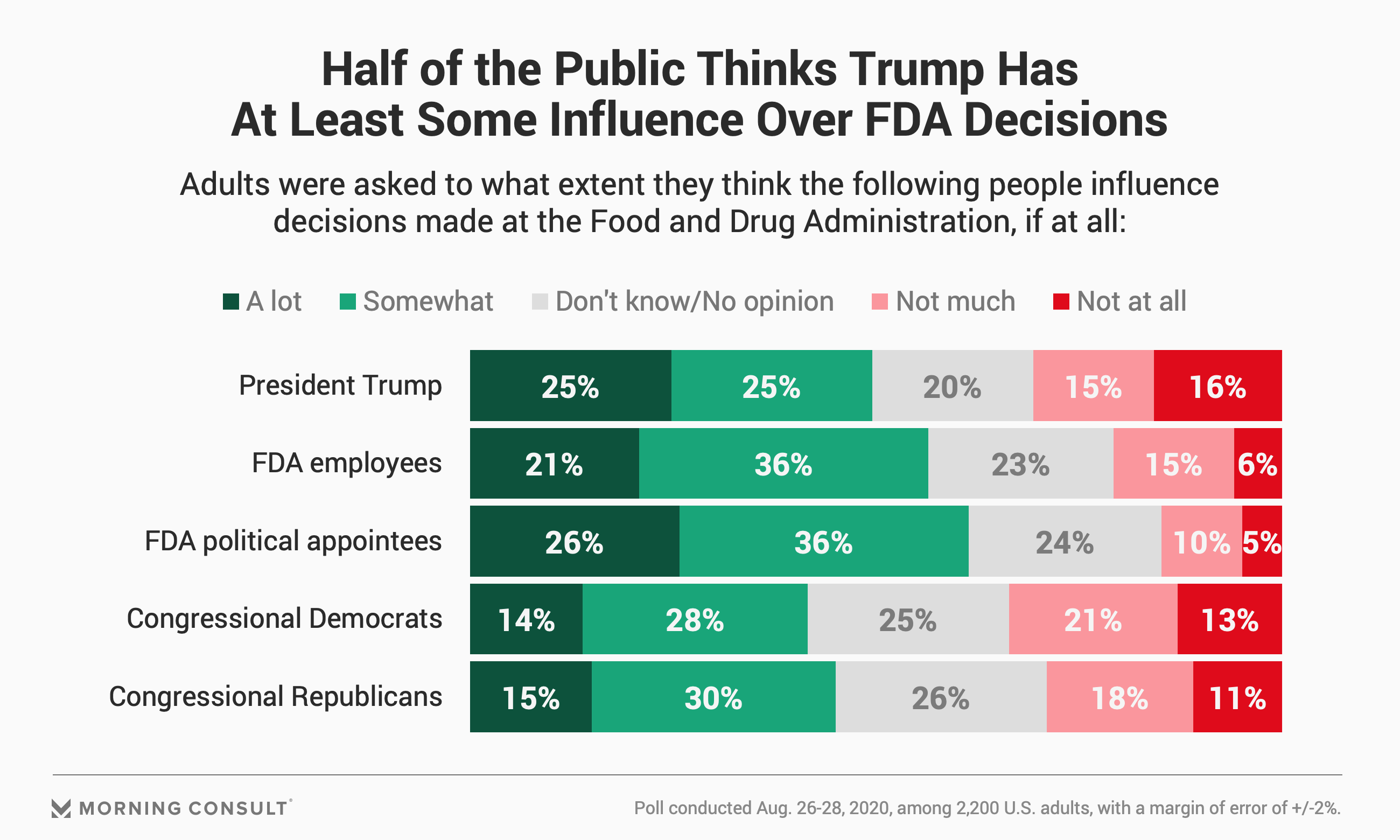 In the Morning Consult poll, 50 percent of the public said Trump influences the FDA’s decisions at least somewhat, compared with 62 percent who think the same of FDA political appointees and 57 percent who said agency employees in general affect decisions.

“I’m glad that the results aren’t worse for the FDA, and I think that it’s really important for the FDA to be careful about squandering the trust that it does have, and actually build on it,” said Dr. Joshua Sharfstein, a vice dean at Johns Hopkins Bloomberg School of Public Health and former principal deputy commissioner of the FDA.

Public opinion on the FDA’s decision-making doesn’t appear to be particularly tied to last week’s plasma controversy, with 53 percent of adults saying they supported the FDA’s decision to issue an EUA for convalescent plasma and 30 percent saying they didn’t know or had no opinion on the issue. Forty-three percent said they didn’t know whether they’d seek treatment with plasma if they or a family member were hospitalized with COVID-19 today, while 41 percent said they would.

It’s not surprising how many people were unclear on plasma, Sharfstein said. “In general, we want patients’ doctors to be aware of treatments, more than patients themselves.”

Yet any erosion of public trust in the FDA and other federal health authorities could create a major problem if a vaccine hopeful is approved, said Caplan, who has called for an independent commission to review data on coronavirus vaccine candidates. Notably, 59 percent of adults in the recent poll said they thought an FDA-approved COVID-19 vaccine would probably or definitely be safe and effective, while 21 percent said it likely would not be safe and another 21 percent didn’t know or had no opinion.

“The agency is now viewed by many with deep suspicion, and vaccines trigger the deepest suspicion,” Caplan said. Having health agencies “compromised – and they are, across the board – takes away a key weapon in the battle against Covid.”

The FDA did not respond to a request for comment.