The clean energy sector continues to feel the pain of the coronavirus pandemic’s impact on the economy, adding just 13,600 jobs in August.

Monday’s report from BW Research Partnership Inc. also adjusts the particularly anemic July estimate from 3,200 jobs added up to 10,373 jobs, leaving the overall losses since the pandemic’s start hovering just under half a million at 490,341. This is up from the sector’s May nadir of more than 600,000 jobs lost. 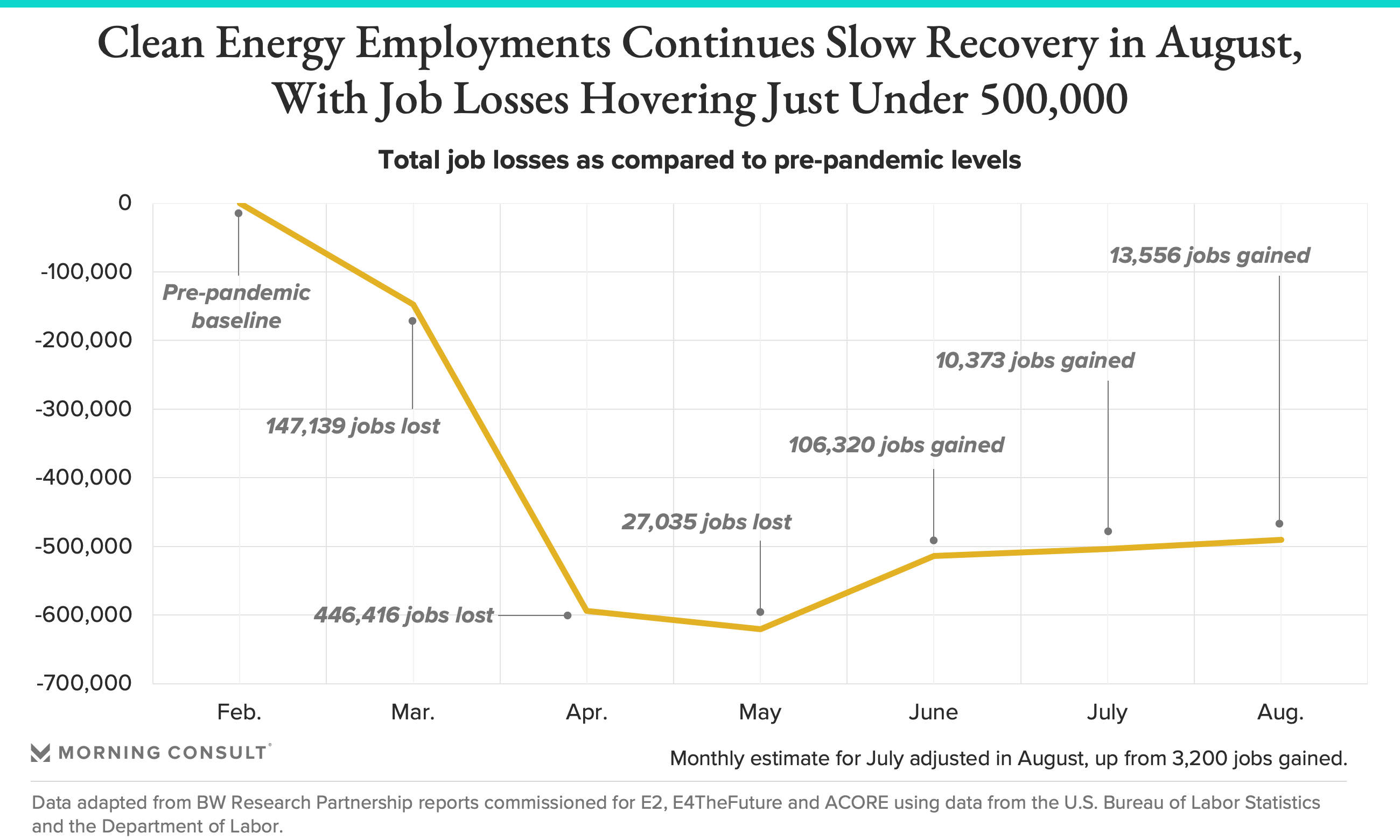 While the clean energy industry saw an abrupt uptick in June of 106,320 jobs created, July and August have seen just modest gains, which the report attributes to “high continued unemployment, casual or paused reopenings, and the exhaustion of many programs from earlier stimulus.”

“This low level of job growth is especially concerning given the dramatic decline in clean energy jobs since the onset of COVID-19,” the report said. As compared with pre-pandemic levels, the sector’s employment has declined by more than 14 percent, with Black and Hispanic workers facing disproportionate impacts.

But it is possible that this relatively dismal picture of the industry is still more optimistic than reality. The report highlights the fact that several recent analyses indicate that the number of employees who have been temporarily furloughed or have had their hours slashed and are underemployed have skewed the totals slightly, and that “unemployment claims economy-wide do not represent the entirety of job losses.”

None of clean energy’s sub-sectors — which include energy efficiency, renewable power generation and clean vehicles — saw job growth above 1 percent in August. California saw the most growth, with 3,100 jobs returning in August, but is still one of more than 40 states that continue to see double-digit unemployment in clean energy. Six states have clean energy unemployment rates of over 20 percent, and Georgia has fared worst, losing 31.3 percent of its workforce since the start of the pandemic.

The August estimate comes from BW Research’s analysis of U.S. Bureau of Labor Statistics data for both June and July, as well as the Department of Labor’s weekly unemployment summaries. It pulls from the Sept. 4 jobs report, which documents 1.4 million new jobs created nationwide in August.

BW Research’s monthly report is part of an ongoing project documenting the impact of the pandemic on the sector’s employment, co-commissioned by Environmental Entrepreneurs (E2), E4TheFuture and the American Council on Renewable Energy.

Correction: A previous version of this story mischaracterized the data in the Sept. 4 jobs report.