When the Emmys are presented on Sunday, prestige titles such as “Watchmen” and “The Marvelous Mrs. Maisel” are expected to be among the winners. But many of the nominated programs are not what most Americans consider to be the best TV shows, according to Morning Consult polling. Experts say this discrepancy between industry and audience favorites is to be expected, and that the Emmys can help draw attention to shows that have flown under the public’s radar, something that has become even more important in the fragmented, peak-TV era. 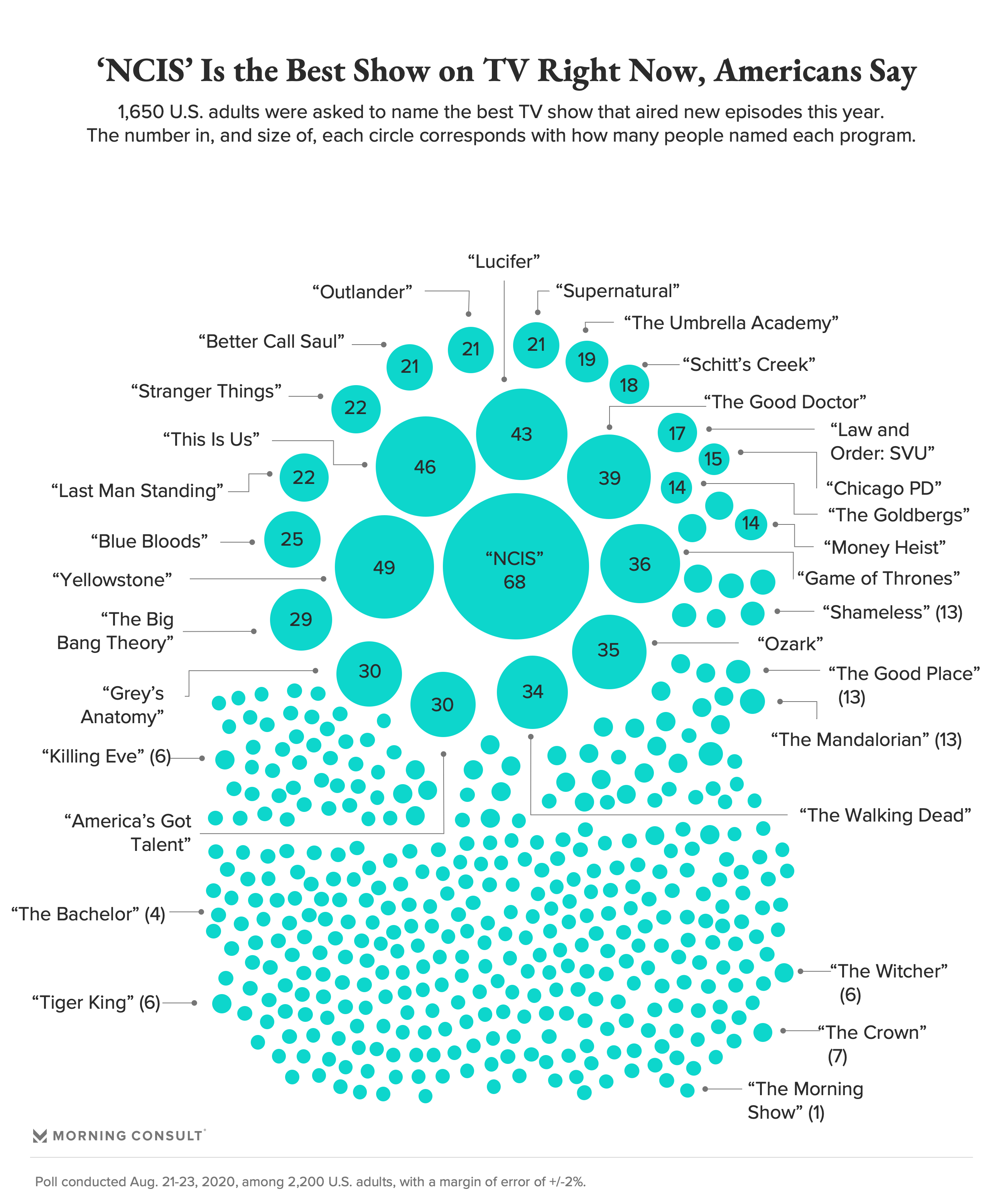 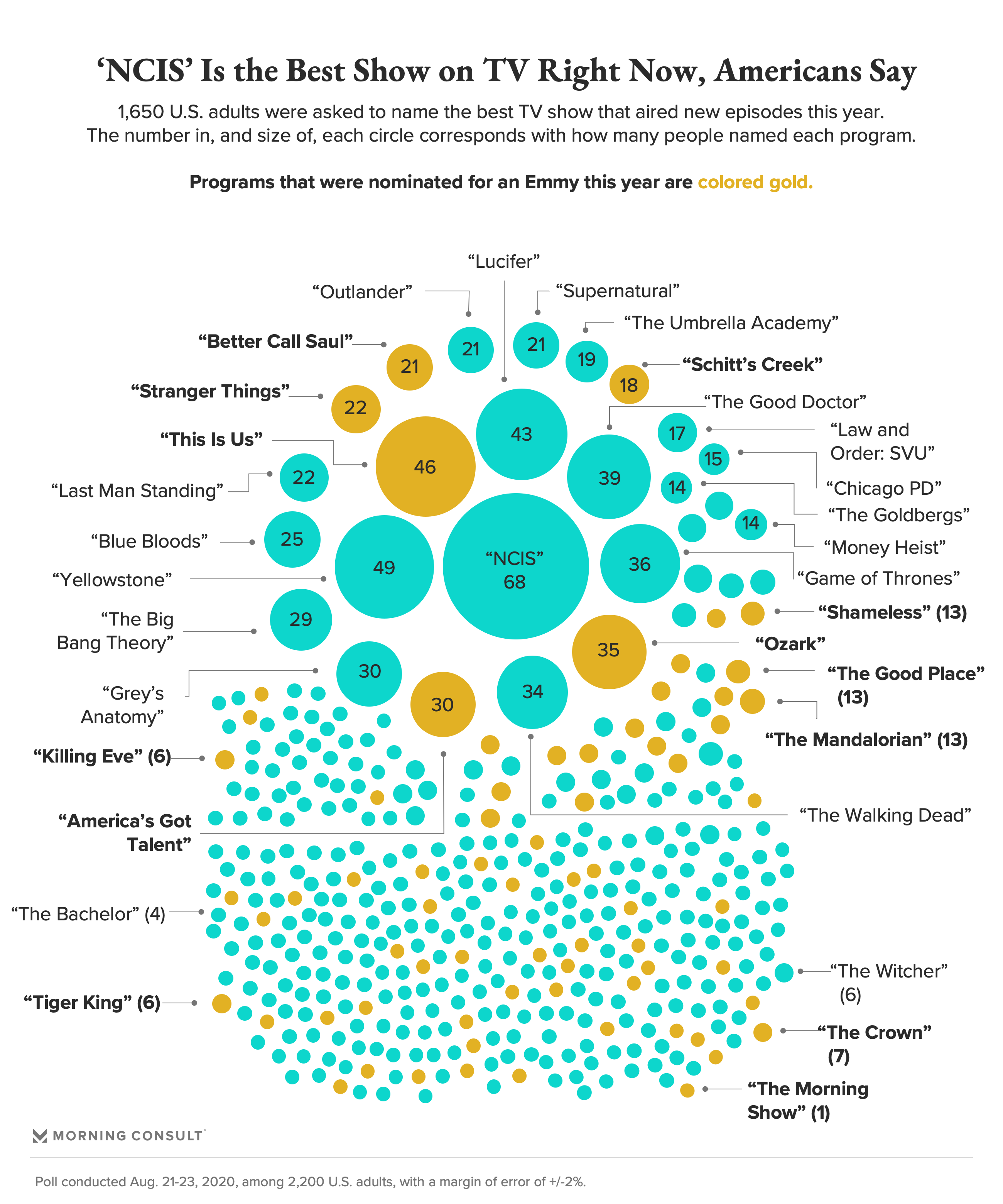 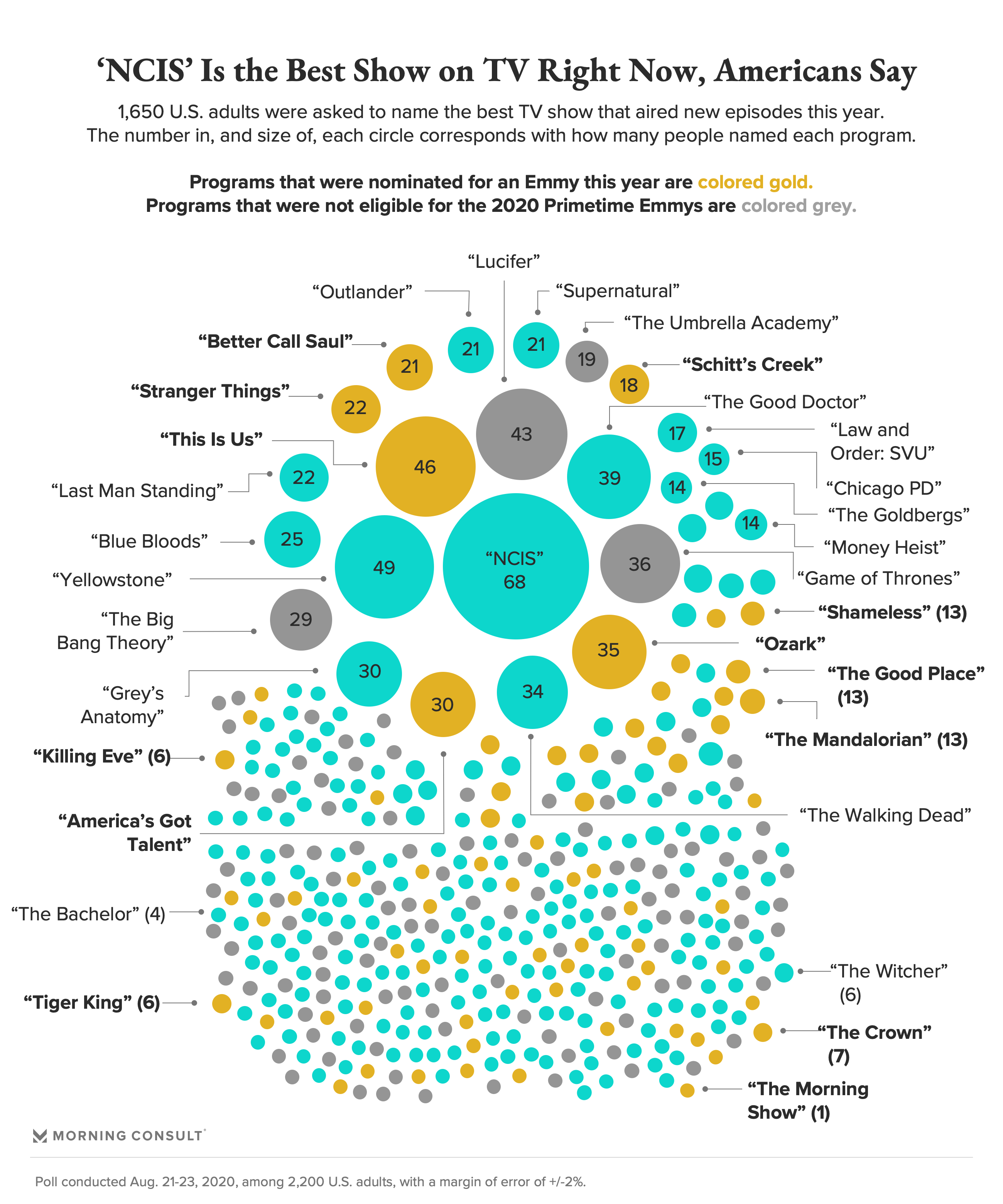 Respondents in an Aug. 21-23 survey were provided a blank space and asked to name, in their opinion, the best TV show that has aired new episodes in the past year. Sixty-eight of the 1,650 U.S. adults who named a TV program, or 4 percent, listed the CBS procedural “NCIS” as the best program, making it the most loved in the poll. Forty-nine respondents said the same of Paramount Network’s “Yellowstone,” while 46 selected NBC’s “This Is Us.” Those three shows make up roughly 10 percent of responses in the survey, which was conducted among 2,200 U.S. adults and has an overall margin of error of 2 percentage points.

Contrast that with “Watchmen,” which earned 26 Primetime Emmy nods from the Television Academy, more than any other program this year: Just three people named the HBO limited series as the best show.

“The Emmy is not an award for most popular show,” said Tom Nunan, a producer and former studio executive who teaches at the UCLA School of Film, Theater and Television. “The Emmy is an award for excellence or outstanding work in television, so there’s generally a disconnect between content that’s popular and content that’s pushing the edge of the envelope artistically and creatively.”

Nunan added that it’s the responsibility of the Television Academy’s to reward creative excellence and to “create awareness around shows that may need that attribution to become more well known.”

Related: A Likable Host Could Be Key to Drawing In Awards Show Viewers

Among the three programs mentioned most frequently in the survey, just one — “This Is Us” — is nominated for an Emmy this year. “NCIS” has been nominated for four Primetime Emmys in its 17-year run (most recently in 2013 for stunt coordination), while “Yellowstone” has never been nominated. TV ratings show that they are among television’s most-watched programs.

“NCIS” was the third-most-watched regularly scheduled program in 2019, per Nielsen, while “This Is Us” was ninth. And when looking at time-shifted programs, “Yellowstone” was No. 1.

While some named critical favorites such as “Better Call Saul,” “Schitt’s Creek” and “The Crown,” those surveyed also named popular programs such as “The Big Bang Theory” and “Game of Thrones,” which wrapped their final seasons last year and weren’t eligible for this year’s ceremony, which honors programs that aired a new episode between June 2019 and May 31.

“In this current media landscape, shows can kind of live forever in a way that they didn’t used to,” said Johanna Blakley, managing director at the Norman Lear Center at the University of Southern California’s Annenberg School for Communication and Journalism, who cited streaming platforms and syndication on TV networks as two pathways through which viewers can discover older programming. 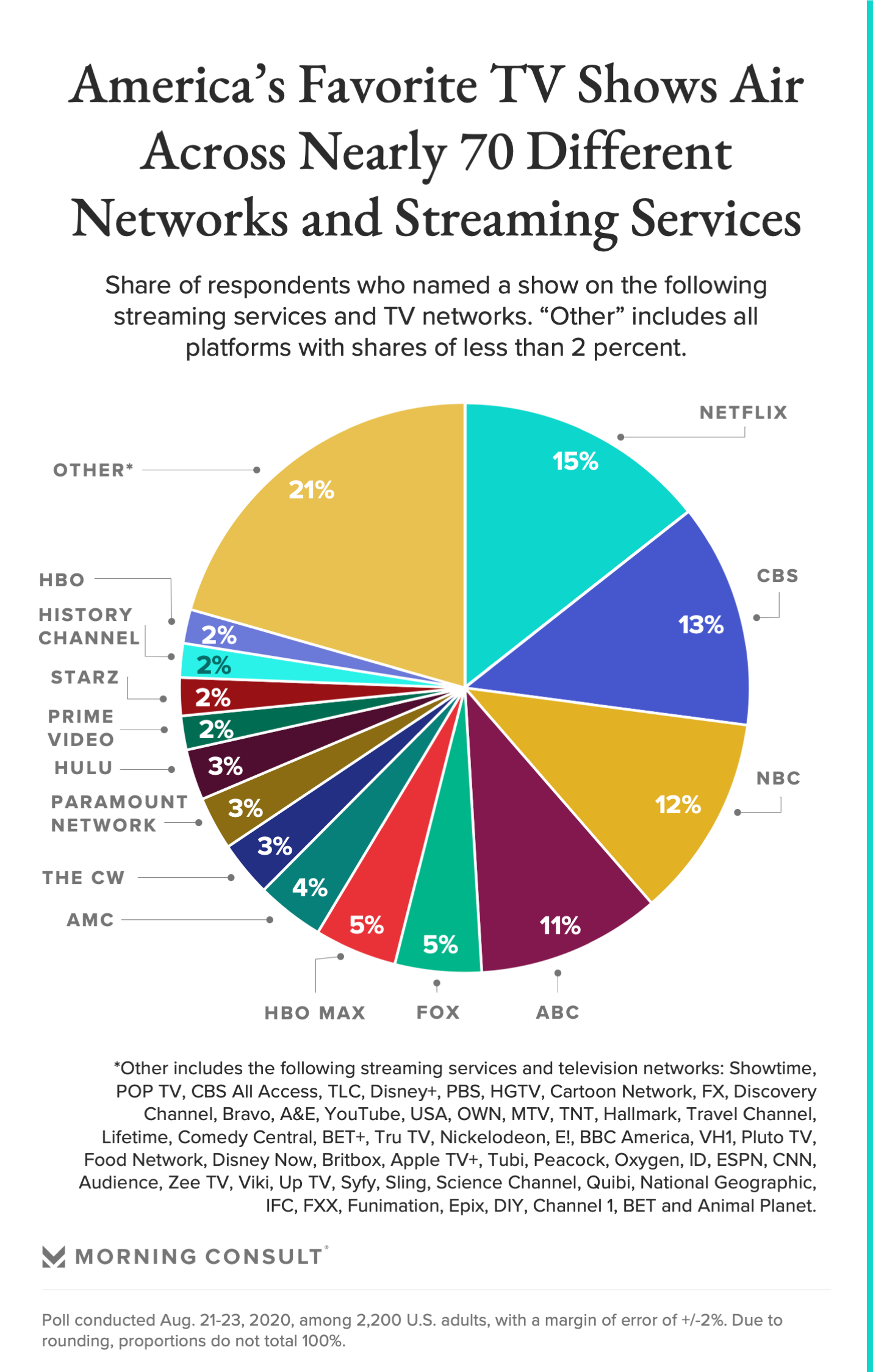 “People have less of a sense of when a show actually ‘goes off the air,’” she said. “In many ways, they’re always already available now.”

Financial factors could also contribute to the divide.

Seven of the top 10 programs named in the survey aired on broadcast television or ad-supported cable, though just two of the 10 programs that received the most Emmy nominations — “Saturday Night Live” and “Schitt’s Creek” — can say the same. Netflix Inc. and HBO, two premium subscription platforms, earned the most nominations this year with 160 and 107, respectively. NBC was next with 47 nods.

In recent years, the Emmys are just one of the televised awards ceremonies that has seen a decline in viewership. Last year’s ceremony was watched by roughly 6.9 million people, falling  32 percent from the 2018 telecast.

But Nunan doesn’t suspect there’s a correlation between declining viewership and interest in the nominees, as there’s no proof that viewers would tune in if “NCIS” and “Yellowstone” led the nominees. Instead, he says viewers “may expect that the Emmys are going to illuminate them to new content.”

Last year, after “Fleabag” took home several big prizes, Morning Consult polling found that brand recognition for Prime Video originals rose 4 points, with 25 percent of consumers able to name a Prime Video original after the Emmys compared to the 21 percent that were able to do so before the ceremony.

“There’s a very specific PR value to a nomination and to a win,” Blakley said. “I wouldn’t be surprised at all if that is the motivating factor to promote challenging, new, genre-defying fare.”