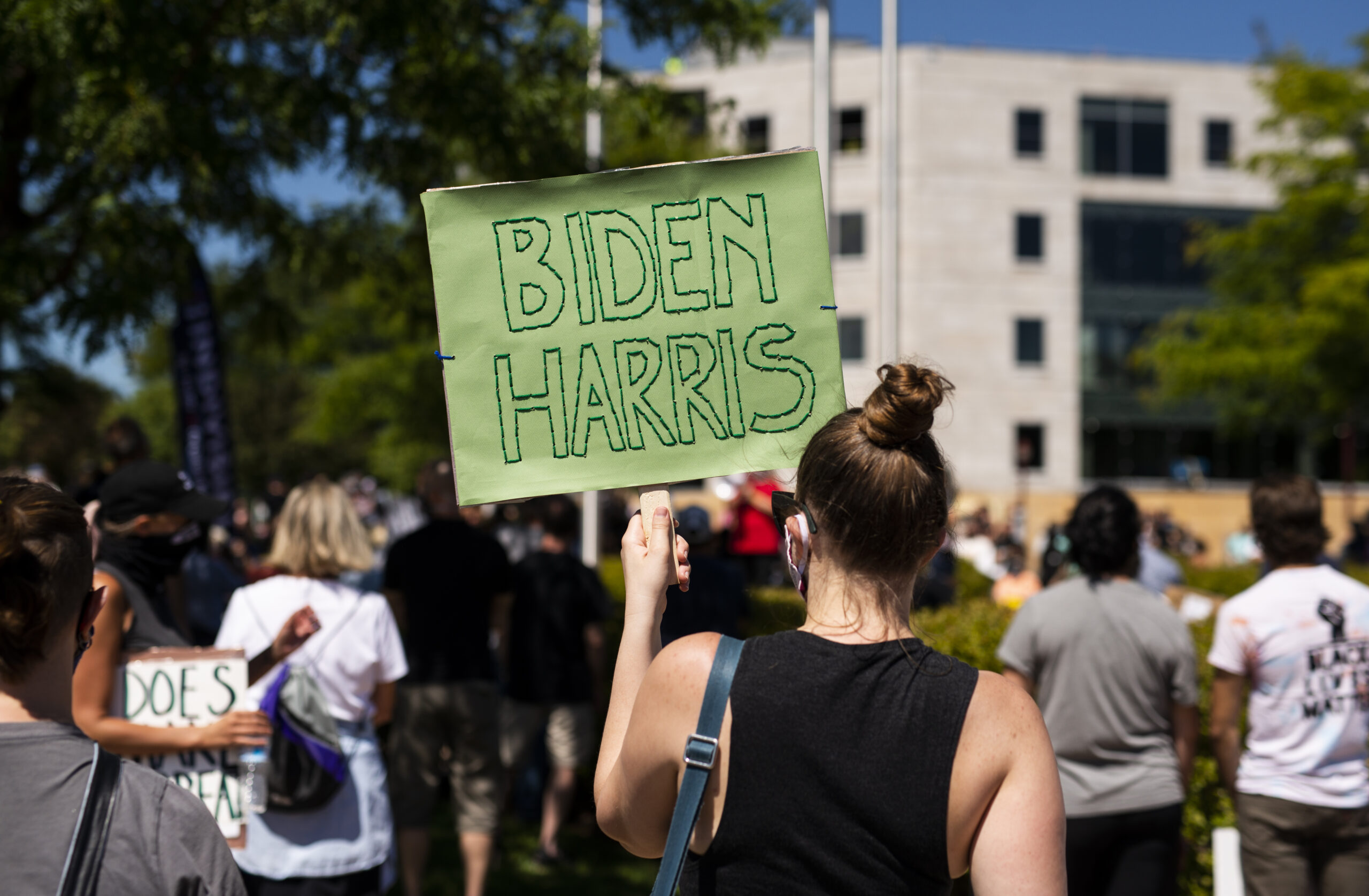 A woman holds a handmade sign that says "Biden Harris" in downtown as President Donald Trump makes a campaign stop on Aug. 17 in Mankato, Minn. Despite efforts by the president and GOP allies to paint Biden as a radical liberal, polling shows he and his running mate, Kamala Harris, are viewed as more moderate than President Donald Trump or Vice President Mike Pence. (Photo by Stephen Maturen/Getty Images)
By Eli Yokley

Efforts by President Donald Trump and his Republican allies to paint former Vice President Joe Biden as a radical liberal after he selected Sen. Kamala Harris (D-Calif.) as his running mate have not made an impact on public perceptions, according to a new Morning Consult/Politico poll, which also found that voters continue to see the Democratic ticket as closer to the ideological center than the Republican ticket.

Voters in the Sept. 11-14 survey, which asked respondents to place the candidates on a scale of one to seven (with one meaning “very liberal,” four meaning “moderate” and seven meaning “very conservative”), rated Biden at 2.7, similar to findings measured a month ago following his selection of Harris, who has a 2.5 rating. Trump was placed at 5.8, just slightly to the left of the 6 rating for Vice President Mike Pence. 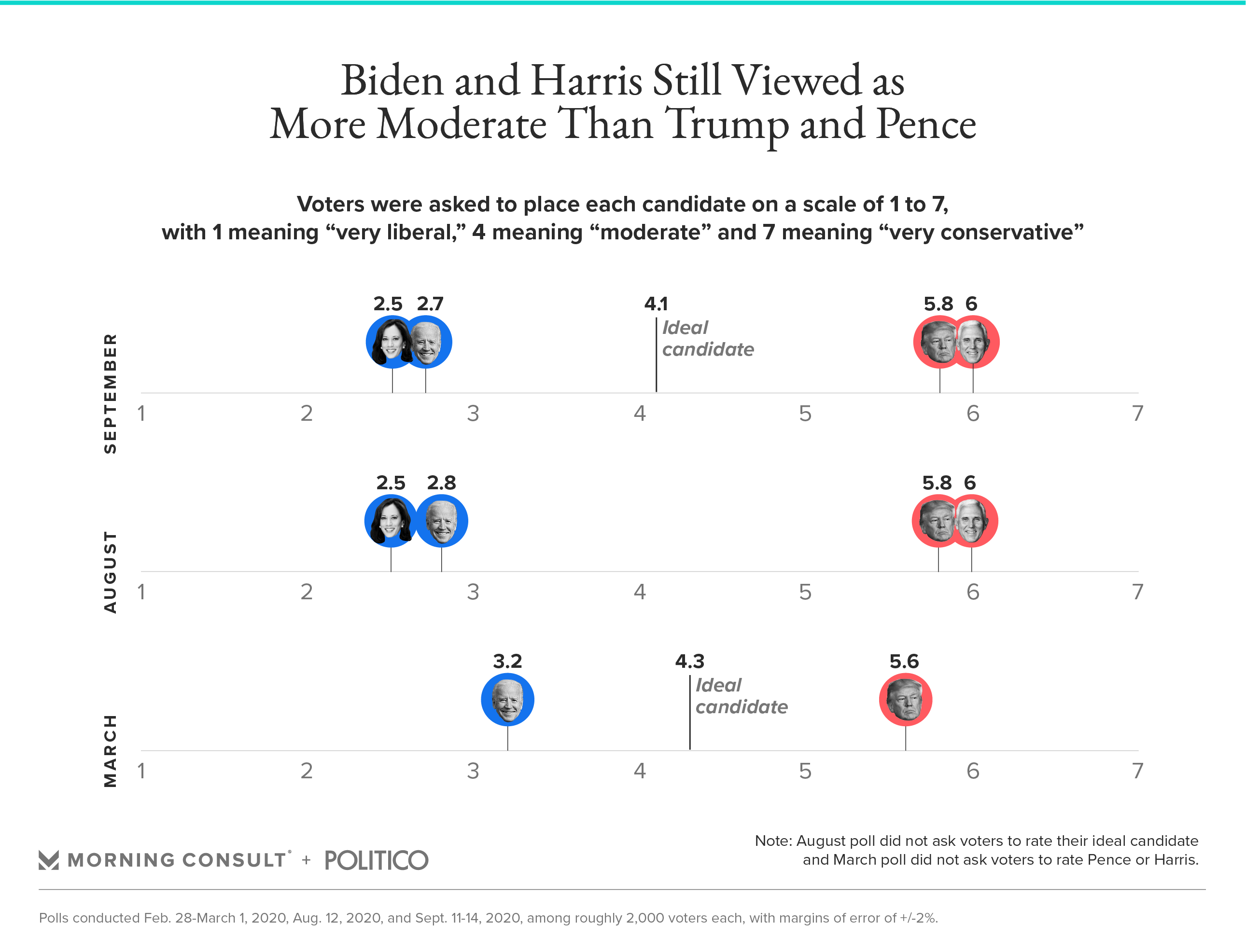 The stability in the figures comes after the Trump campaign spent a month using the Harris pick as proof that Biden will be a puppet of the radical left if he’s elected president. The pitch relies on voters’ buying into the notion that Biden, who will turn 78 in November and has a tendency to trip over his words, would serve as a mere passenger in a Democratic administration run by a California liberal who is ideologically out of step with the public.

While views of candidate ideology are not immobile — in the eyes of voters, Biden shifted leftward between the height of the Democratic primary in March and his truce with Sen. Bernie Sanders in mid-July — Harris’ rating has not moved since she became a vice presidential candidate, indicating that efforts to push perceptions of her and Biden to the left may have limited reach after a Democratic presidential primary that saw both candidates criticized for their comparatively moderate positions.

In that contest, rivals attacked Biden’s decades-old votes and Harris’ record as attorney general and district attorney, while both were pummeled for their resistance to the liberal policies and rapid progressive change sought by the likes of Sanders and Elizabeth Warren (D-Mass.).

Related: Biden Holds Slim Edge Over Trump in Minnesota Ahead of Visits

What’s more is that voters view Trump, a recent convert to the conservative orthodoxy, and Pence, a lifelong conservative and former House Republican hard-liner, as more extreme than Biden and Harris, who are closer to the ideological center and to the 4.1 rating that voters defined as the “ideal” ideological makeup for a presidential candidate.

And when it comes to the national race, the Biden-Harris approach is winning.

The latest Morning Consult poll tracking the presidential contest, which surveyed 10,392 likely voters Sept. 11-13, found Biden leads Trump by 8 percentage points, 51 percent to 43 percent, roughly in line with his average standing over Trump since the former vice president announced his selection of Harris on Aug. 11.