When It Comes to Health Ads, Biden Outspends on TV as Trump Holds Lead on Facebook 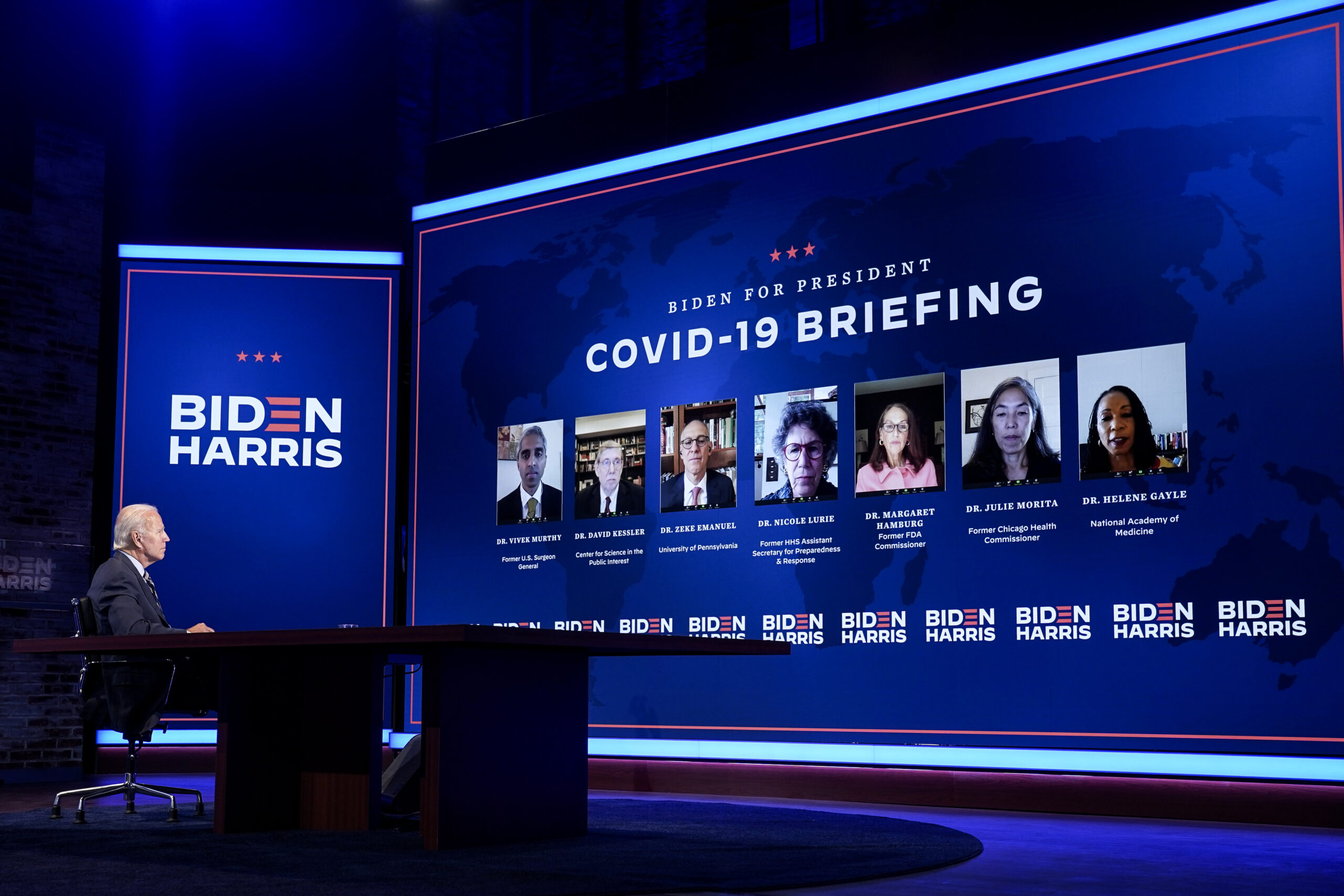 Democratic presidential nominee Joe Biden has outspent President Donald Trump 4 to 1 on health care-related TV advertising over the past five months, according to data that comes as both campaigns look to mobilize voters on key issues in the final stretch of the race.

Between May 3 and Sept. 20, Biden spent about $42.3 million to Trump’s nearly $10.5 million on broadcast ads that mentioned health care issues like the coronavirus pandemic, affordability and prescription drugs, making up about 42 percent and 14 percent, respectively, of their campaigns’ overall broadcast ad spending in that time frame, according to data provided to Morning Consult from Advertising Analytics LLC. Biden ran 20 health care ads in English, while Trump ran eight.

Those totals don’t include spending by outside groups or radio or digital ads, which Trump and the Republican Party have prioritized in recent years; in general, Trump has consistently trailed Biden in TV ads while outspending him online. But a closer look at the commercials that mention health care issues, even briefly, offers a sense of what each campaign thinks will resonate on the top federal election issue for 20 percent of registered voters, according to a Sept. 18-20 Morning Consult/Politico poll. 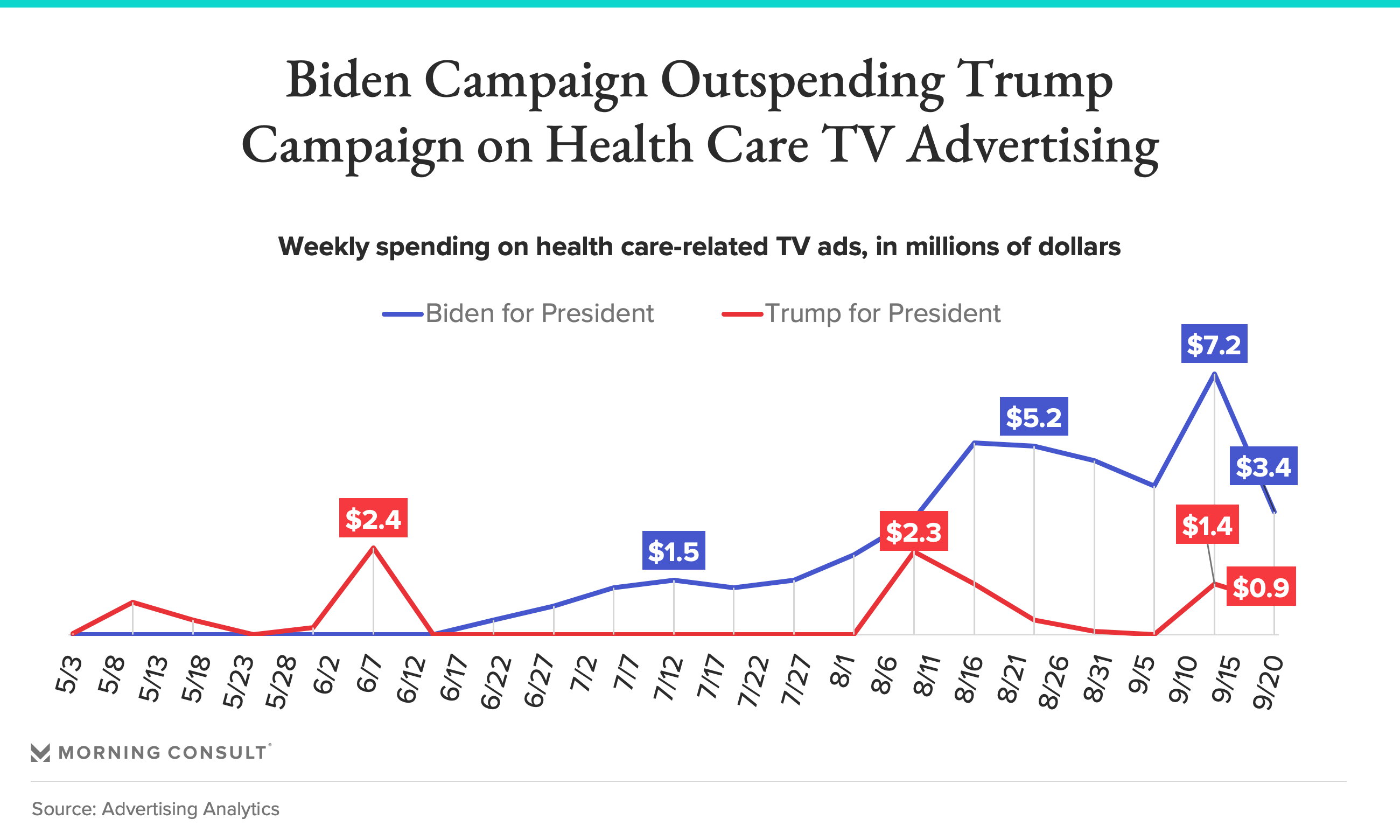 Trump’s largest spend on advertising that mentioned a health topic came the week of June 7, with nearly $2.4 million on a spot that touted the president’s record on the economy before the pandemic and focused on “restoring” the country. Biden’s campaign has had an edge on health-related broadcast ad spending since mid-June; its top week was Sept. 13, with more than $7.2 million on ads that touched on Medicare, health care premiums and getting “control over the virus.”

Shannon Kowalczyk, chief marketing officer for the digital-first Democratic communications firm Acronym and a veteran of President Barack Obama’s 2012 campaign, said the Biden team’s heavy ad spending on health care suggests it is leaning into what Democrats saw as a winning issue in 2018.

“We’ve seen, particularly after 2018, how effective it is for the Democratic Party to talk about access to affordable health care,” Kowalczyk said, adding that the importance of messaging on health care access has been underscored by the pandemic and the upcoming Supreme Court nomination fight.

Most TV ads from both campaigns touched on other issues as well as health care; for example, Biden and Trump each ran an ad this month slamming each other on Social Security and Medicare, while COVID-19 — both the spread of the virus and the economic devastation wrought by the pandemic — was the subject of the most health-related ads from both campaigns over the past five months. Biden ran 13 ads on the coronavirus and Trump ran four, according to Advertising Analytics. 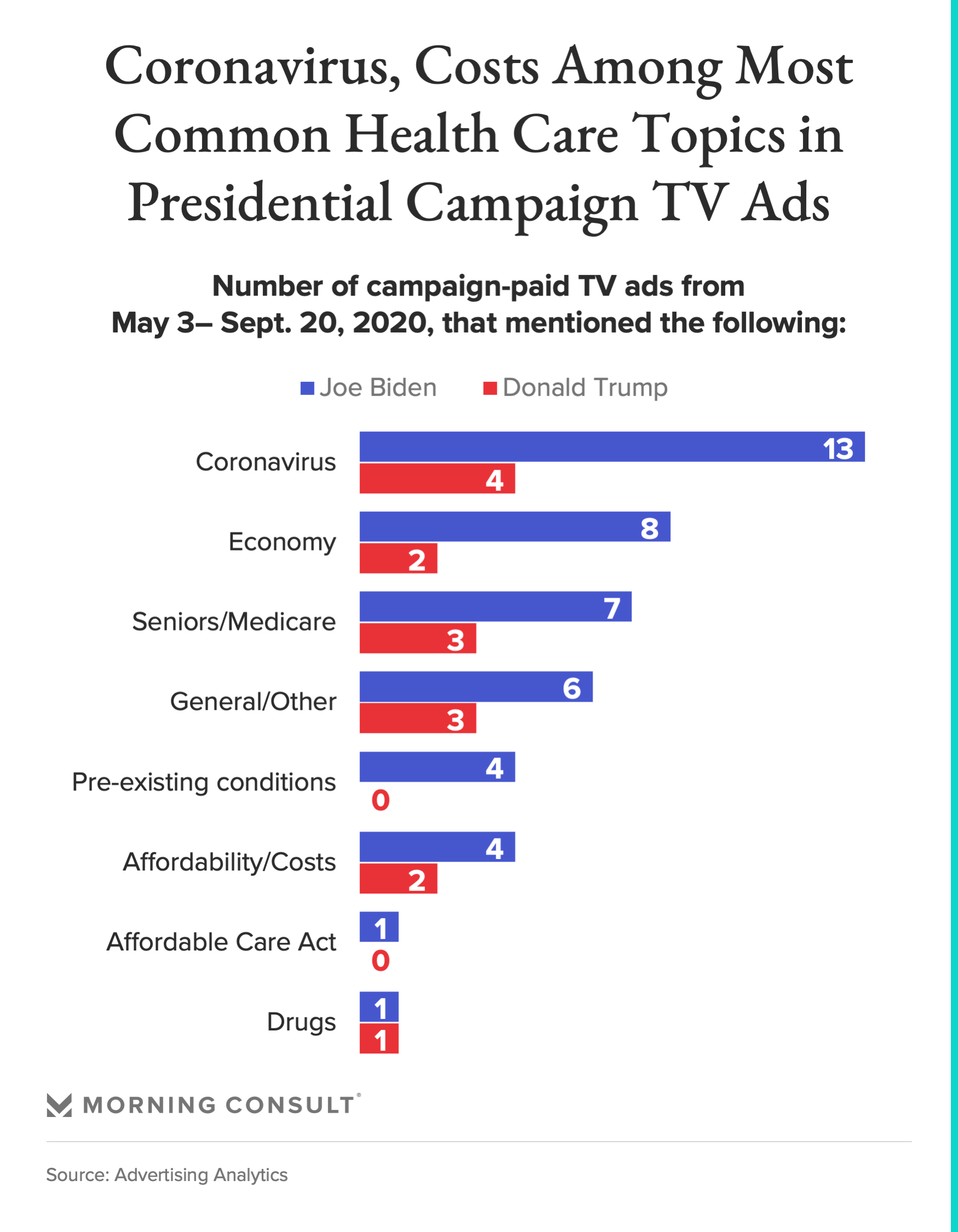 Four of Biden’s ads mentioned pre-existing conditions, while just one explicitly mentioned Obamacare/the Affordable Care Act; no Trump ads mentioned either subject. With most of his COVID-19 ads centered on the economy, health care was the explicit focus of only one Trump ad, which launched last month and targeted “greedy drug companies” and high prescription drug prices.

On social media, the health care ad landscape is another story. Trump spent $1.7 million on health care ads on Facebook from May 2 to Sept. 19, while Biden spent less than $613,000, according to a campaign spending tracker from Bully Pulpit Interactive.

Trump’s higher spending on Facebook is in line with his campaign’s long-running strategy of betting big on digital advertising over broadcast. Spending on health care issues in particular may indicate his Facebook ads are getting strong engagement, prompting the campaign to spend more, said Eric Wilson, a Republican strategist who was digital director of Sen. Marco Rubio’s (R-Fla.) 2016 presidential campaign.

“If they’re doubling down and putting more money in, then it must be working for them,” Wilson said.

He also noted that as campaigns enter their final stretch, they typically focus their public messaging on the issues they think will get voters to the polls, and “they’ve got sophisticated data on what issues are most important to voters.”