Judge Amy Coney Barrett smiles after President Donald Trump announced on Saturday that she will be his nominee to the Supreme Court. As Senate Republicans prepare to move ahead with her confirmation process, new polling shows voters are divided over whether she should be confirmed -- and when that vote should occur. (Chip Somodevilla/Getty Images)
By Eli Yokley

President Donald Trump’s nomination of Judge Amy Coney Barrett to replace the late Justice Ruth Bader Ginsburg on the Supreme Court has divided the American electorate, with voters closely split over whether she should be confirmed by the Senate and under which circumstances that vote should occur.

According to a Morning Consult/Politico poll conducted Saturday after Trump’s 5 p.m. announcement, 37 percent of voters said the Senate should vote to confirm Barrett to fill Ginsburg’s seat, while 34 percent said it should not. The poll surveyed 1,990 registered voters, with a margin of error of 2 percentage points.

By comparison, a Morning Consult/Politico poll conducted in July 2018 after Trump announced Judge Brett Kavanaugh as his pick to replace Justice Anthony Kennedy on the high court found slightly higher support and less opposition for his confirmation. 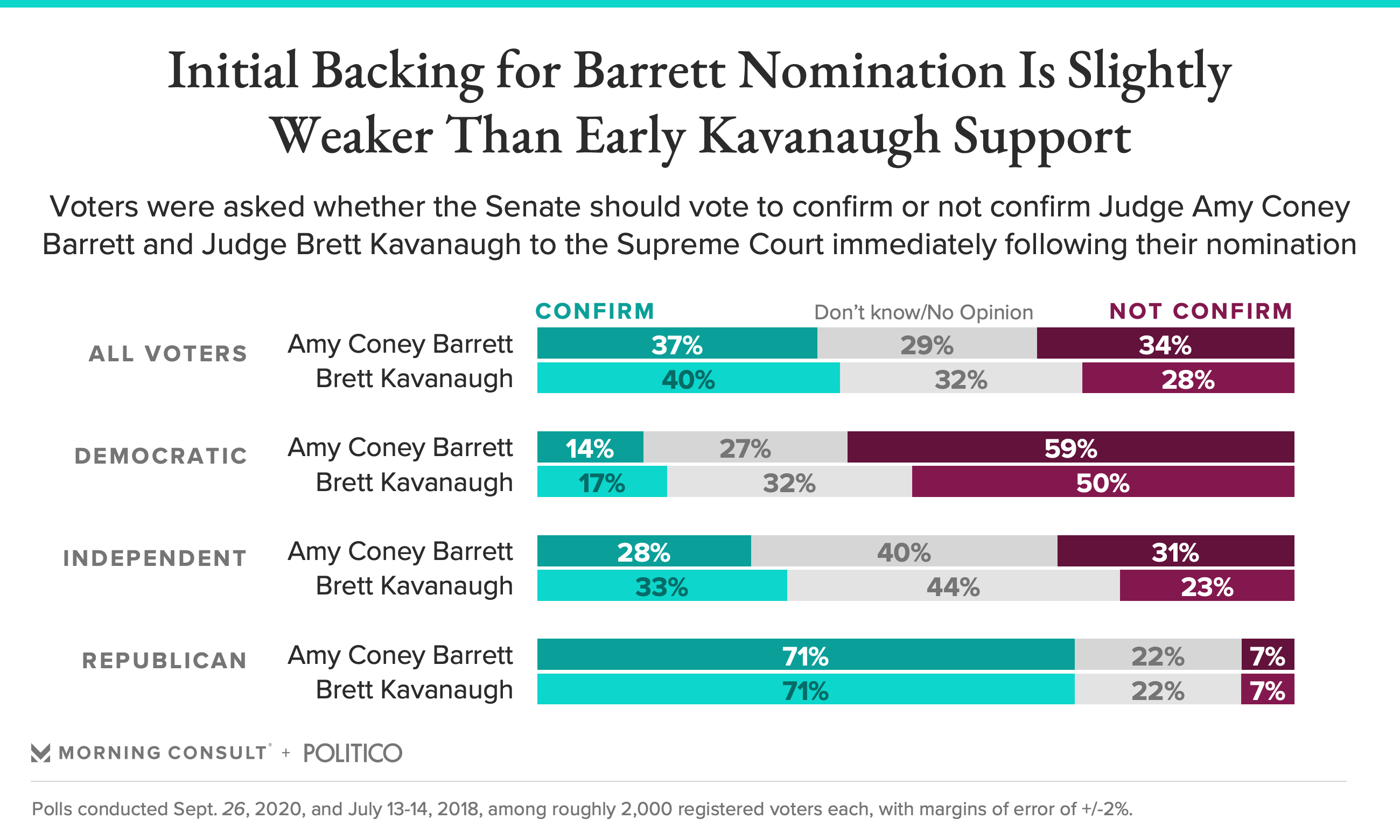 The lower level of initial support for Barrett’s nomination is driven by a higher level of dissent from Democrats and independents than at the beginning of the 2018 fight. By the time Senate Republicans voted to confirm Kavanaugh amid allegations of sexual misconduct three months later, support for his elevation to the high court had dipped underwater, with 40 percent opposed and 37 percent in support.

In remarks from the White House, Trump cast Barrett as “a woman of unparalleled achievement, towering intellect, sterling credentials, and unyielding loyalty to the Constitution.” He noted the bipartisan backing of her appointment to the United States Court of Appeals for the 7th Circuit in 2017, when she was approved by a 55-43 vote, and pre-emptively thanked the Senate for “providing a fair and timely hearing.”

Senate Judiciary Committee Chairman Lindsey Graham (R-S.C.) said the committee would begin confirmation hearings on Oct. 12, and Senate Majority Leader Mitch McConnell (R-Ky.) said in a statement that the “nomination will receive a vote on the Senate floor in the weeks ahead.”

The prospect of a pre-election confirmation — with the Republican Party’s grip on the White House and the Senate on the line — has been panned by Democrats, who accuse McConnell of hypocrisy for pushing the Barrett vote after he refused to take up President Barack Obama’s nomination of Judge Merrick Garland following the February 2016 death of Justice Antonin Scalia. In her final days, Ginsburg also relayed her desire that she not be replaced on the court “until a new president is installed,” according to her granddaughter.

“Republicans are poised to not only ignore her wishes, but to replace her with someone who could tear down everything that she built,” Senate Minority Leader Chuck Schumer (D-N.Y.) said in a Saturday statement. “This reprehensible power grab is a cynical attack on the legitimacy of the Court.” 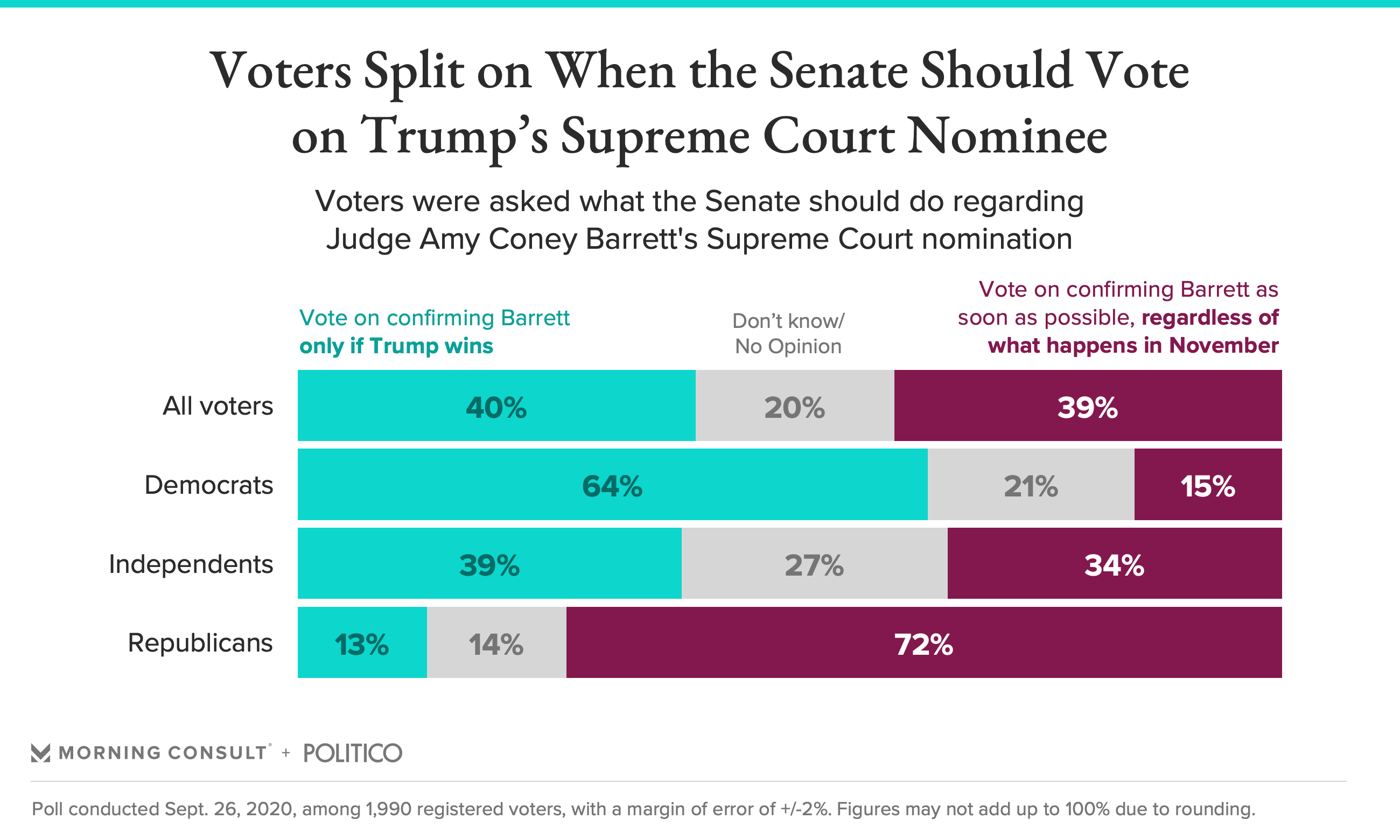 Voters are divided on how the Senate should proceed: 40 percent said the chamber should only vote on confirming Barrett if Trump wins in November, while 39 percent said it should move as soon as possible, regardless of the possible election results.

The split was similar to Morning Consult polling in 2016 after Obama’s election-year nomination of Garland, when 42 percent said he should get to make the pick and 45 percent said it should be left to his successor. Right after the Kavanaugh pick in 2018, polling found 39 percent of voters said the Senate should vote before the election, while 35 percent said the chamber should wait until new lawmakers were seated.

Trump’s weekend announcement of the Barrett pick lacked the suspense of previous Supreme Court nominations. The president had spoken openly about his consideration throughout the week and news of her selection broke on Friday. The survey found 19 percent of voters said they’d seen, read or heard “a lot” about the choice, less than the 32 percent who said the same regarding Trump’s prime-time Kavanaugh announcement in 2018.

When it comes to Barrett, a quarter of voters have favorable opinions of her, including half of Republicans, while 24 percent, including roughly 2 in 5 Democrats, have unfavorable views of her. Roughly half of voters do not have opinions about the jurist.