Pandemic Pushing Some Millennials to Look Into Homeownership

Among adults who don't own homes, millennials are most likely generation to consider buying one amid COVID-19

With the coronavirus pandemic continuing to make city-dwelling less of a necessity for urban professionals facing the prospect of continued remote work, some millennials are looking to bid farewell to rental life in favor of more space and stability in their living arrangements.

The pandemic has wreaked havoc on the economy, bringing activity to a halt earlier this year and stymying activities like traveling and going out to eat and shop.

The housing market, however, hasn’t yet seen the same kind of downturn. Demand has risen during the crisis, with existing home sales rising 10.5 percent in August from the same month last year.

A good portion of that demand is being driven by younger buyers, a new survey from Morning Consult suggests. 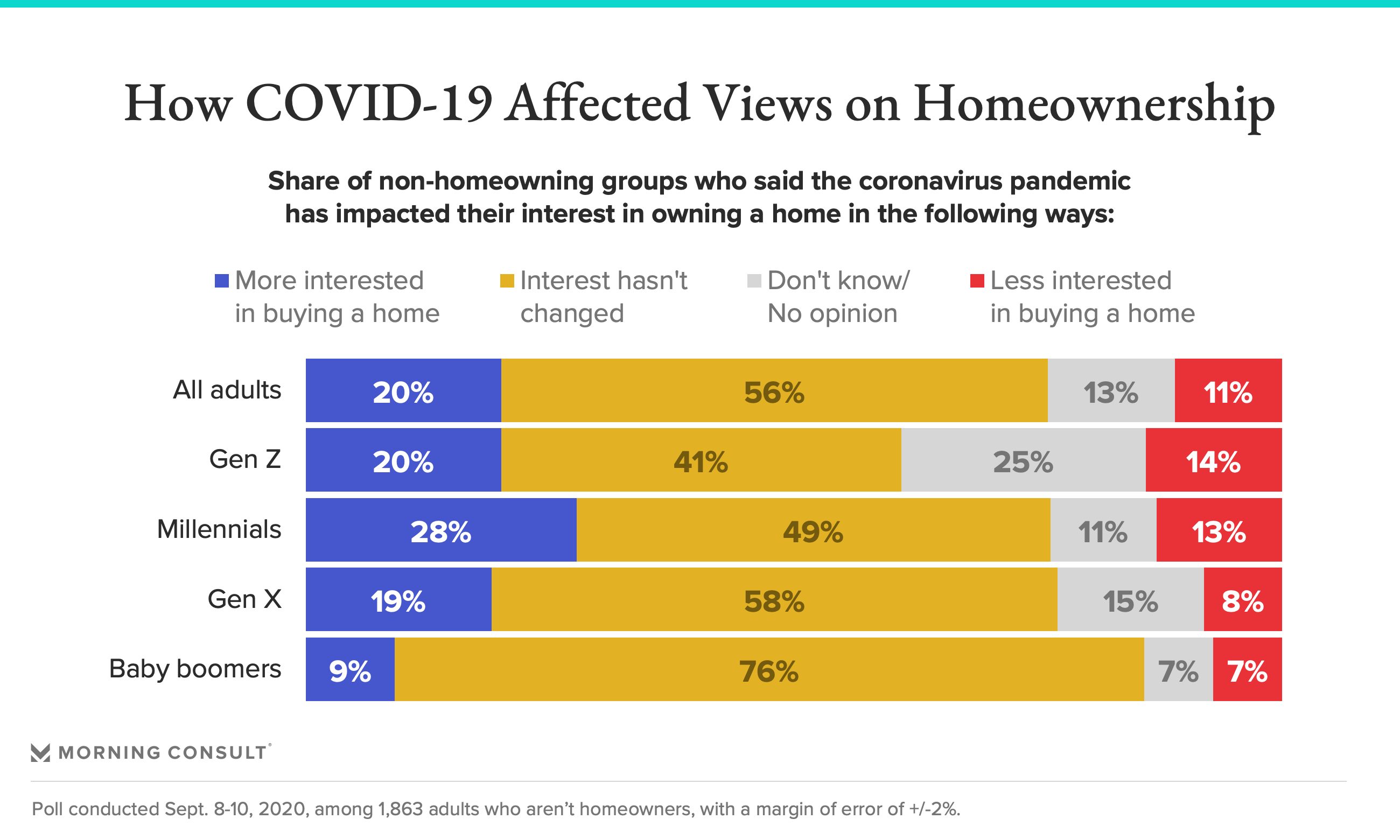 Among those who don’t live in homes they own, millennials are the most likely generation, at 28 percent, to say that the coronavirus pandemic has made them more interested in buying their own home in the future.

Gen Z follows millennials at 20 percent, while 19 percent of Gen Xers and just 9 percent of baby boomers say the same.

Some of the generational difference in homeownership interest can likely be attributed to age: Millennials have already delayed home ownership, so those in the upper age bracket of that generation might simply be ready to move out of rented spaces, especially with coronavirus restrictions. Most baby boomers who are able to own their own homes most likely already do, reflected in the highest percentage of those who said that their interest in homeownership hasn’t changed because of COVID-19 at 76 percent.

The question of millennials and homeownership addresses something more fundamental about the generation: While older groups are more likely to have settled into their mortgages and financial habits, the coronavirus could permanently shape the future financial priorities of millennials, currently the largest working cohort in the United States.

It’s already affecting millennials’ spending priorities, although the group isn’t alone in that.

To gauge how this could be changing, Morning Consult asked how all adults, including millennials, would spend an extra $1,000 in a month.  This analysis is particularly important because, unlike the first time Morning Consult asked this question in March 2019, the government did actually give people an extra $1,200 earlier in the pandemic, and further stimulus is still being negotiated among the Trump administration and Congress.

Related: Millennials Were Already Putting Off Having Children. Then the Pandemic Hit.
Housing Millennials Pandemic Impact