Second recession will make it 'difficult for millennials to make up what they've lost,’ economist says

With the Great Recession more than a decade in the rearview mirror, millennials finally seemed to have found their footing after starting their careers amid a global economic catastrophe. But after nearly five years of growth, it all came crashing to a halt with the onset of the COVID-19 pandemic.

While no generation was spared from pay cuts or layoffs brought on by the coronavirus-fueled shutdown, millennials were the ones who could least afford to take the economic hit. A new Morning Consult poll shows that the group, which is made up of adults born between 1981 and 1996, suffered reduced wages at comparable levels to other generations but were affected slightly more than their counterparts in terms of job loss.

Thirty percent of employed millennials said they received a pay cut or lost income due to the current economic recession and COVID-19 pandemic, more than the 23 percent of Gen Xers who said the same, and within the margin of error compared with the shares of Gen Zers (26 percent) and baby boomers (27 percent) who reported the same fate. Twenty-seven percent of all employed U.S. adults said they suffered a pay cut or lost income brought on by the pandemic.

The survey was conducted Sept. 8-10 among 4,400 U.S. adults and has a margin of error of 1 percentage point. The subsample of 754 employed millennials carries a 4-point margin of error. 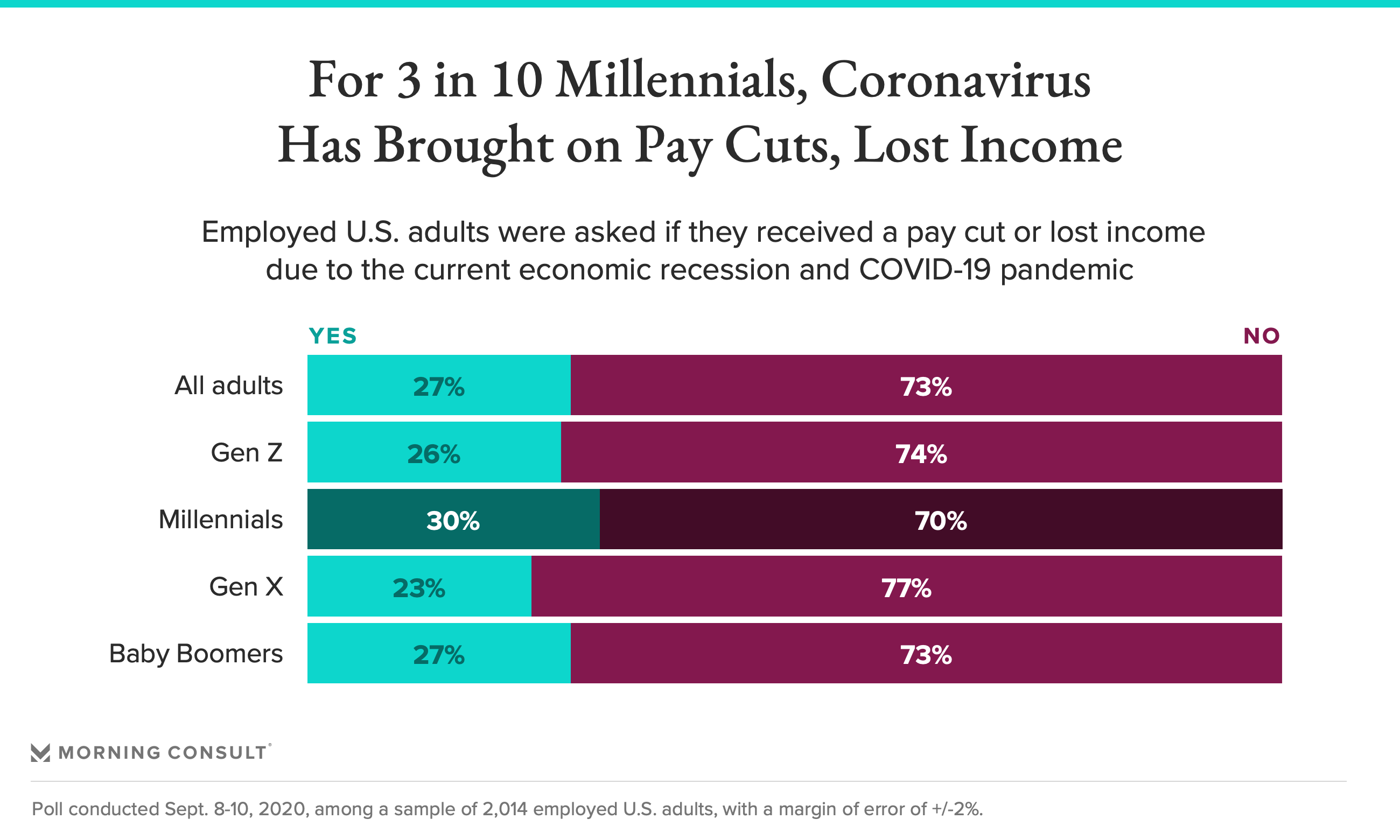 The dire financial consequences for adults entering the job market during a recession are well-documented by experts. Even as millennials rode the momentum of 128 consecutive months of economic expansion in the United States, the generation’s financial gains were relatively muted thanks to the severity of the Great Recession and the steady-yet-modest recovery.

“Many millennials were scrappy enough to figure out how to supplement their incomes with nontraditional work arrangements, particularly through the gig economy and other forms of self-employment,” said Morning Consult economist John Leer. “Unfortunately for them, these arrangements were the easiest to restructure during the pandemic. From a legal and operational perspective, it’s easier for businesses to pare back contract work, and that’s exactly what they did.”

It will become increasingly difficult for millennials to catch up to where they're supposed to be in terms of total savings and investments in time for retirement.

A forthcoming Morning Consult study of retail investors found that 45 percent of millennials are not able to put away their earnings into savings, Leer said, compared with 31 percent of baby boomers. It’s a vicious cycle for millennials: A loss of income only exacerbates the inability to save, forcing growing shares of the generation to live paycheck to paycheck, making it “increasingly difficult for millennials to make up what they’ve lost,” Leer said.

“The problem with this generational disparity is that younger workers are supposed to save and invest so that they have money to spend when they’re older and unable to work,” Leer added. “Given the math associated with compound interest, it will become increasingly difficult for millennials to catch up to where they’re supposed to be in terms of total savings and investments in time for retirement. That’s a problem for millennials, but it’s also a problem for the future of the U.S. economy.”