For Gen Z, Coronavirus and Social Injustice Are the Biggest Issues Facing the World

Survey of the youngest generation finds lack of trust in leaders, doubt in society’s appetite for change 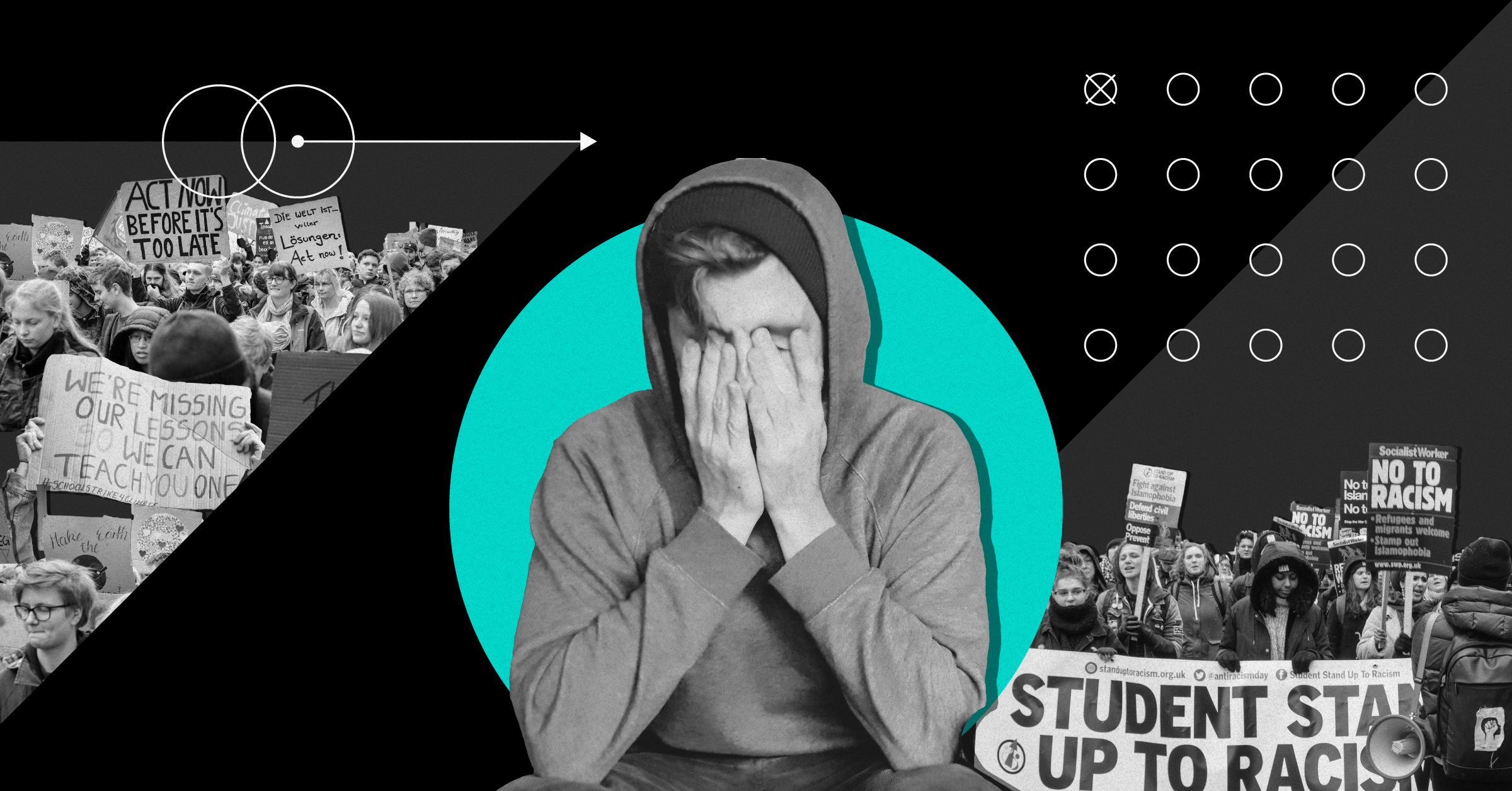 A shared sense of mistrust and pessimism about humanity’s capacity for progress is the common thread among Gen Z respondents in a recent Morning Consult survey that asked members of the youngest generation what they viewed as the biggest issue currently facing the world.

While the ongoing coronavirus pandemic was the top issue cited in response to the open-ended survey, concerns over social injustice claimed the second spot and variations on “human fallibility” took third, perhaps indicating an overall sense of despair from a generation weathering a health care crisis, the second recession of their lifetimes, worsening climate change and a racial reckoning, all before many of them have reached adulthood.

In the poll of 1,000 Gen Zers between the ages of 13 and 23, about 35 percent said they thought the pandemic was the biggest issue facing the world right now, while 18 percent listed racism or another form of discrimination, 16 percent cited human fallibility more generally and 11 percent said economic concerns. Few respondents who cited health issues as the top problem facing the world today didn’t mention COVID-19.

“I think the biggest issue we are facing is the uncontrollable spread of the coronavirus and with that the unemployment of many, and the at risk safety of all people,” one respondent wrote.

“We have things like climate change, sky-high prices for education, and a corrupt leader in office,” another Gen Zer wrote. “But over everything, Id say COVID -19 is our number one issue. Its impacted so many of us, more than anything else.” 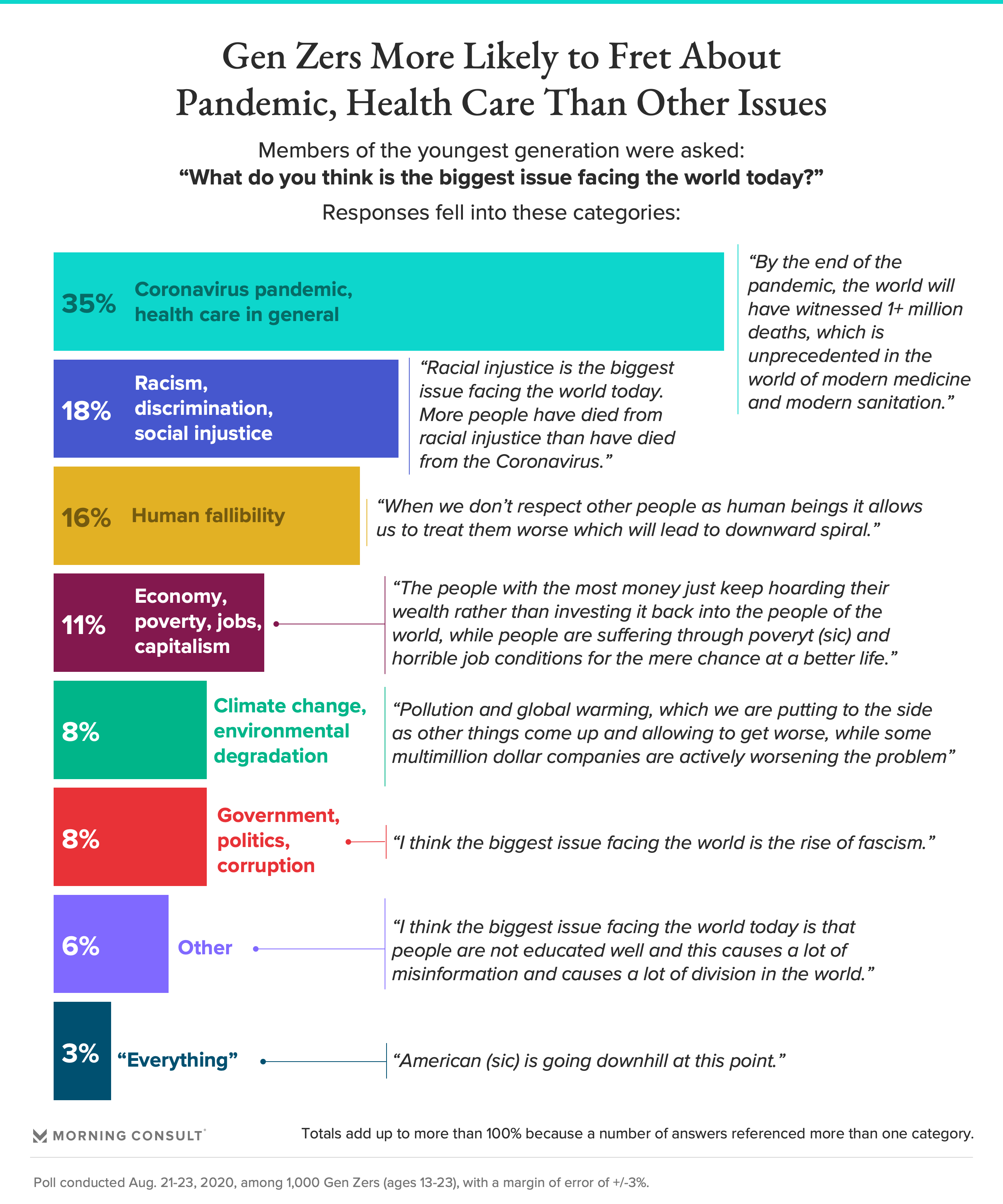 The survey was conducted Aug. 21-23, just days after the World Health Organization warned that adults in their 20s, 30s and 40s were becoming the primary spreaders of the virus in many countries. And while in an average year an estimated 1 in 5 U.S. public school students return to school in mid-to-late August, many schools across the country have remained closed to in-person learning due to the pandemic.

The pandemic has already been a formative experience for a generation of young people, the survey implied. Among respondents who elaborated on their coronavirus concerns, many were worried about the economic or social fallout of the pandemic, and suggested young people have little faith in leaders — or each other — to address these problems.

“The biggest issue facing the world today is that people arent respecting other people and people arent wearing masks,” one respondent wrote. Another suggested “the impending aftermath of Covid-19” could be a bigger problem than the virus itself.

Beyond the pandemic, the policy areas that dominate young people’s concern fall into several buckets: the economy and job losses; government and political corruption; and climate change and environmental degradation. However, in light of the pandemic, Gen Zers expressed a similar sense of pessimism about the world’s ability to make progress on these priorities.

Fretting about the economy took on many forms, from specific worries about the effect of the pandemic on the job market to “the plight of capitalism” more broadly.

Despite the fact that the pre-pandemic job market was a tight one, the pandemic’s toll prompted one young person to say the biggest issue facing the world is “maintaining a job or getting a job,” and another worried about the fact that “there are too many people who do not eat on a daily basis.”

Meanwhile, the word “hoard” came up in three separate responses regarding those in the top income brackets and their wealth. One respondent advocated for restructuring the economy entirely, suggesting the United States should “defund services like the military and police officers to pay for more educational services, mental health services, homeless shelters and food shelters.”

These responses bled into the 8 percent of those more explicitly about the government system and partisanship, many of which mentioned corruption; one respondent said dishonesty by political leaders prevents “many impoverished populations from accessing and benefiting from global markets, worsening their situation and leading to blatant human rights abuses and unequal opportunities.”

President Donald Trump was mentioned by name in 26 separate answers (many of which panned his response to the coronavirus pandemic), while his Democratic challenger Joe Biden got one mention and “liberals” or “Democrats” were mentioned five times in total.

In another 8 percent of responses that brought up climate change and environmental degradation, young people revealed a sense of mistrust in collective action that recalls the larger group’s attitude toward the country’s pandemic response. For instance, one respondent said while climate change is their biggest overarching concern, the lack of regard for the issue is even more worrying than the phenomenon itself.

And in the same poll, most members of Gen Z said climate change’s progression is inevitable; roughly half said they believe humans can slow but not stop climate change, while 8 percent said the phenomenon is beyond our control.

However, many members of Gen Z are concerned less about the lack of policy-making progress in areas they prioritize, and more about something more wide-reaching and insidious: human character and fallibility. About 34 percent of answers referenced concerns about racism and discrimination or a general despair at human nature, perhaps indicating a disaffectation with the country’s political and social systems.

That humanity is fundamentally flawed was self-evident to a number of respondents, including one who said the world’s greatest issue is “the absence of an agreed upon moral or ethical compass in our culture.”

And more specific concerns about discrimination run the gamut, with the vast majority explicitly highlighting racism against Black people and a smaller group mentioning the persistent lack of acceptance for women and those in the LGBTQ community. A number of respondents mentioned social injustice more broadly, with one saying issues from more than 100 years ago persist today.

“More people have died from racial injustice than have died from the Coronavirus,” wrote one. “The US has found multiple ways to continue living with Coronavirus that are not too inconvenient for most of everyone. However, many black people still live in fear of dying at the hands of cops who are racially prejudice against them.”

However, some respondents said they thought these types of concerns were overblown, with one saying “Bs protests about racism” were the top issue currently facing the world, while another suggested organizations such as Black Lives Matter “are destroying this nation.” Roughly 2 percent of respondents said protesters, civil disobedience, political correctness or the Black Lives Matter movement specifically were the biggest issues facing the world.

Approximately 3 percent, or 31 responses, included a variation on “everything” as their answer, with one writing simply “surviving.”