With the survival of the Affordable Care Act in jeopardy following President Donald Trump’s nomination of conservative Judge Amy Coney Barrett to replace the late Justice Ruth Bader Ginsburg on the Supreme Court, a new Morning Consult poll finds a record-high 62 percent of voters in support of the 2010 health law.

That level of backing, which is up 7 percentage points from a Morning Consult survey conducted in the first quarter of 2020, comes as the ACA, also known as Obamacare, re-emerged as a flashpoint issue in the Nov. 3 elections: The Supreme Court is preparing to hear arguments Nov. 10 in a case that could entirely overturn the landmark health law. The lawsuit, brought by Republican-led states and backed by the Trump administration, hinges on the GOP’s 2017 tax law that wiped out the ACA’s individual mandate penalty, an unpopular provision that required all Americans to have health insurance or pay a fine. Without it, the lawsuit argues, the entire law is invalid. 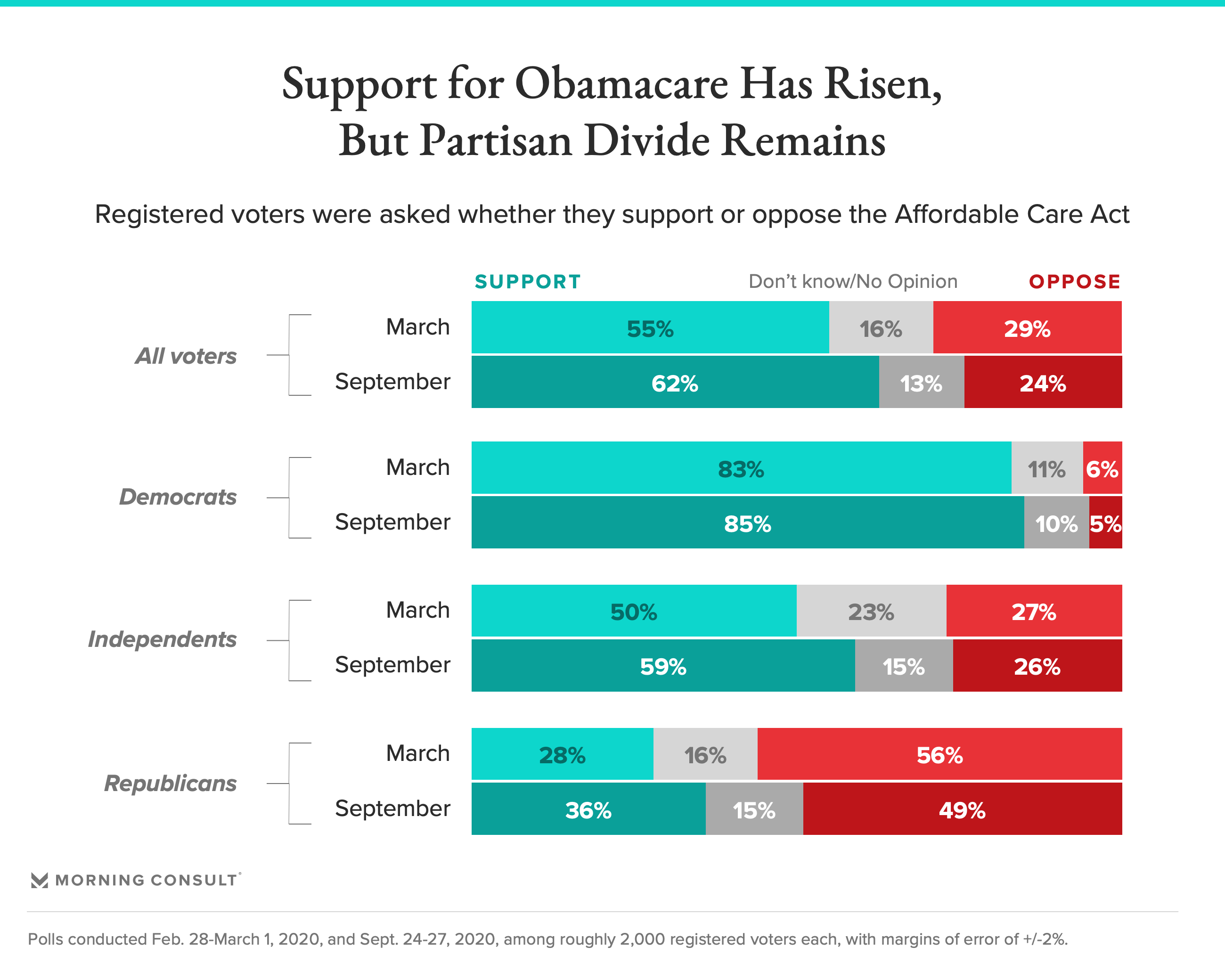 Barrett, a federal appellate judge and Notre Dame law professor, has previously criticized a 2012 court decision that upheld the ACA, and Democrats are framing her nomination to the court as a threat to Americans’ health care.

The poll, conducted Sept. 24-27, indicates the ACA is top of mind for voters, regardless of whether they support or oppose the law, which has seen a roughly 20-point increase in support since 2013. Among the 62 percent of voters who strongly or somewhat support the ACA, 90 percent said protecting and strengthening the law was an important factor in casting their vote in the 2020 elections. Among the 24 percent of voters who oppose the law, 83 percent said repealing and replacing it was an important election issue.

“There is a smorgasbord of issues in this election,” said Larry Levitt, executive vice president for health policy at the nonpartisan Kaiser Family Foundation. “The ACA had been taking a bit of a back seat, but I think the Supreme Court confirmation fight coming at the same time as the latest legal threat to the ACA has pushed the issue to the front.”

The record-high level of ACA support in the latest poll of 1,991 registered voters was fueled by increases among independents and Republicans: 36 percent of GOP voters said they support Obamacare, up 8 points from earlier this year, and backing from independents increased 9 points, to 59 percent. The vast majority of Democrats support the ACA, at 85 percent, and roughly half of Republicans (49 percent) oppose the law.

Related: When It Comes to Health Ads, Biden Outspends on TV as Trump Holds Lead on Facebook

That compares to 4 percent and 75 percent, respectively, among Democrats. Just 11 percent of Democrats and 8 percent of Republicans said the ACA should be left as is.

“If you could divorce it from the partisan sloganeering, which is very hard to do, most people on both sides of the aisle would say that there are improvements to be made in the ACA,” said Dr. Katherine Baicker, a health economist and dean of the University of Chicago Harris School of Public Policy. 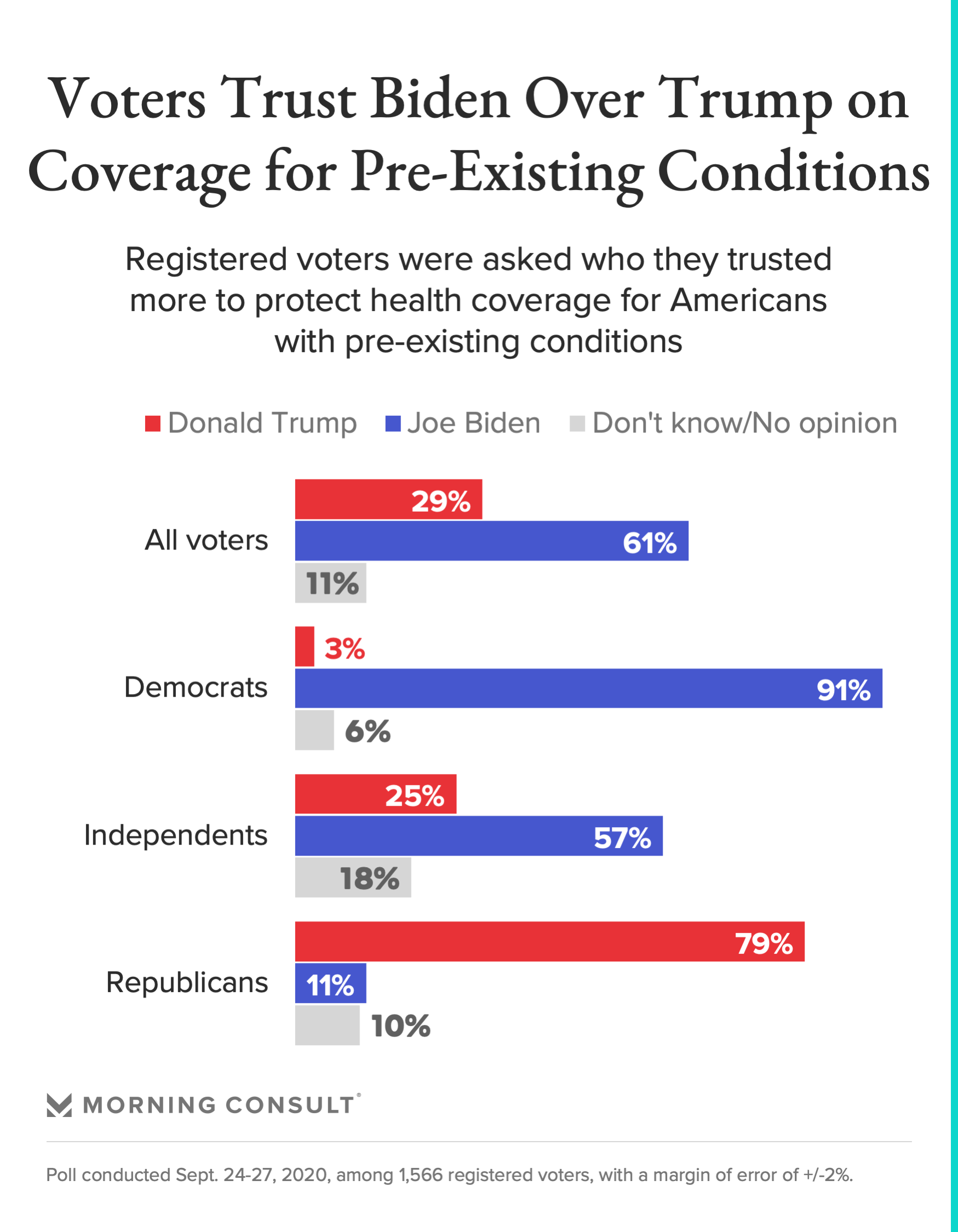 One of the ACA’s key provisions has much broader support than the law itself: 79 percent of voters favor ensuring health coverage for people with pre-existing conditions, including 91 percent of Democrats and 63 percent of Republicans.

“Most of the individual elements of the ACA have always been more popular than the ACA itself,” Levitt said. “Nearly half of adults either have a pre-existing condition, or someone in their family does. It’s an issue that touches a lot of people’s lives.”

With Election Day approaching, Republicans have taken steps in recent weeks to try and neutralize attacks from Democrats who say the administration’s backing of the latest ACA lawsuit amounts to an assault on those protections.

Trump, who has promised throughout his term and as recently as Sunday to replace the ACA with a “much better” and “far cheaper” plan, signed an executive order last week stating it is the “policy of the United States” to ensure coverage for people with pre-existing conditions, a move policy experts said carries little enforcement power.

The president has his work cut out for him in convincing voters that he is the candidate to safeguard those protections, according to the survey: 61 percent of voters said they trusted Democratic presidential nominee Joe Biden more to protect insurance coverage for Americans with underlying conditions, compared with 29 percent who said they trusted Trump. Similarly, voters were more likely to trust Democrats in Congress (49 percent) than Republicans in Congress (35 percent) to handle health care for the country.