Factors That McSally’s Campaign Cited for Her 2018 Loss in Arizona Are Exacerbated This Year, Strategists Say

Martha McSally has underperformed Trump’s overall support in the state

Sen. Martha McSally (R-AZ) speaks to the crowd with President Donald Trump at a rally at the Arizona Veterans Memorial Coliseum on Feb. 19, 2020 in Phoenix, Ariz. Experts say that McSally, who faces Mark Kelly to serve out the remaining two years of late Sen. John McCain's term, is experiencing the same circumstances in 2020 that contributed to her 2018 loss against Kyrsten Sinema. (Caitlin O'Hara/Getty Images)
By Eli Yokley

This is the seventh in our “Majority Makers” series, a race-by-race look at the contests that will decide control of the Senate in 2021. See our previous dives on South Carolina, Colorado, North Carolina, Kansas, Michigan and Iowa.

After Martha McSally’s 2018 loss to Kyrsten Sinema in an open-seat race to replace retiring Sen. Jeff Flake (R), her campaign strategists produced a memo that blamed the result on factors out of her control.

The document, published at the time by The Washington Post, cited her Democratic opponent’s major cash advantage and bipartisan appeal — especially in the populous Maricopa County — and dissatisfaction from moderate Republicans, particularly women, who were repelled from the GOP by President Donald Trump’s antics and the divisive fight over Judge Brett Kavanaugh’s Supreme Court confirmation.

McSally made it into the Senate anyway, appointed by Republican Gov. Doug Ducey to replace GOP Sen. John McCain, who died from brain cancer in August 2018. But now, as she faces Democrat Mark Kelly in a special election to serve out the final two years of McCain’s term in a race that will prove pivotal to which party controls the Senate in 2021, strategists say the conditions that contributed to her loss two years ago don’t just persist, they are exacerbated: Not only is Kelly a prolific fundraiser with a compelling personal story as an astronaut who gained fame after the 2011 shooting of his wife, former Rep. Gabby Giffords, but America’s suburbs aren’t trending back toward the GOP — and Trump isn’t getting any more popular. 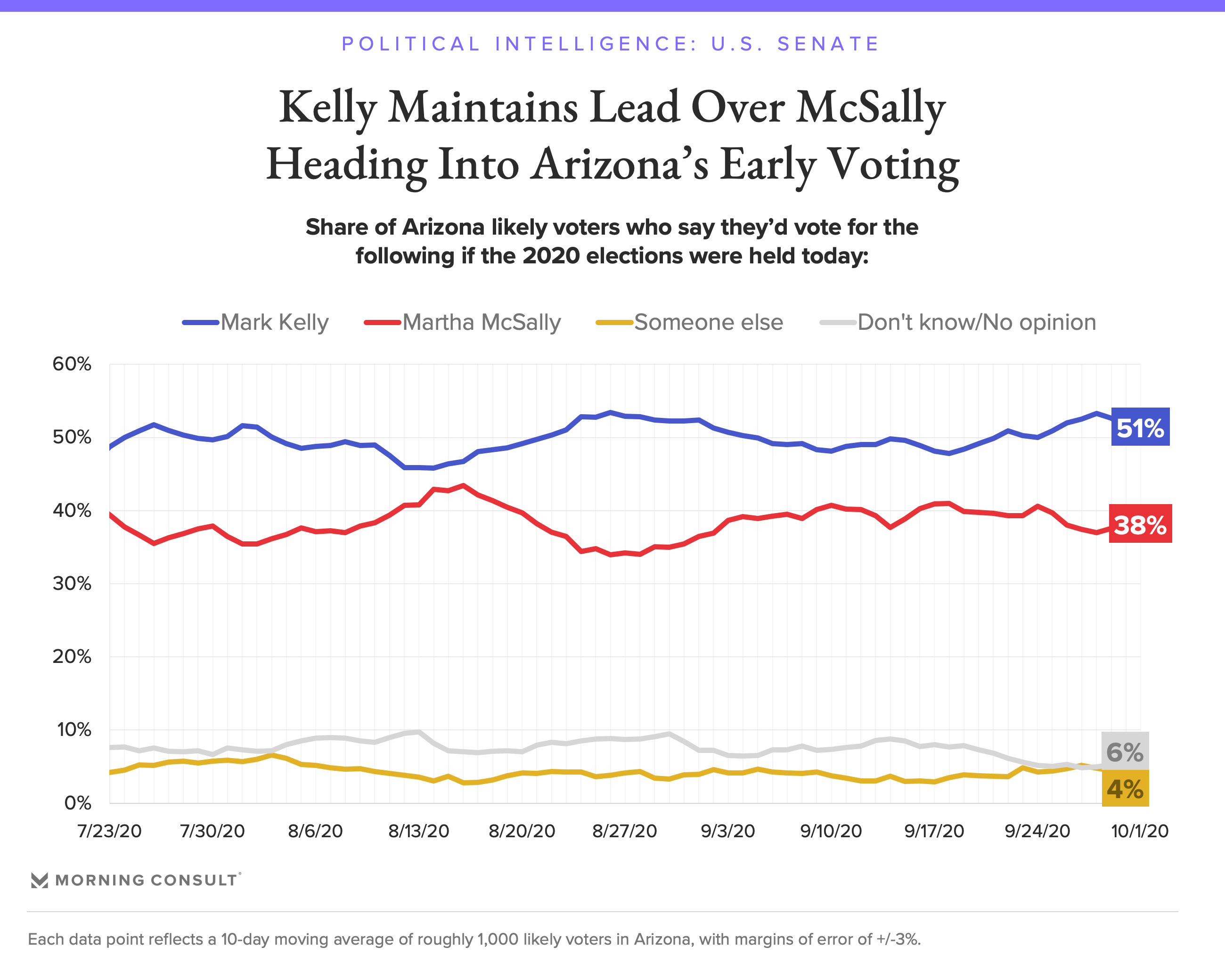 “It’s a presidential year, there’s going to be half a million more voters that vote, they’re going to be younger and more partisan on the left, and she’s running against a better candidate,” said Chuck Coughlin, an Arizona lobbyist who shepherded former Republican Gov. Jan Brewer’s successful re-election campaign in 2010.

According to Morning Consult Political Intelligence tracking conducted Sept. 22 through Oct. 1, Kelly leads McSally by 13 percentage points, 51 percent to 38 percent, among 1,048 likely voters in Arizona. While McSally’s campaign has pointed to internal numbers showing a tighter race, other public polls are generally in line with Morning Consult’s figures, showing Kelly in the lead and McSally underperforming President Donald Trump, who has been more competitive with Democratic nominee Joe Biden at the top of the ticket but still trails in most polls.

As is the case across much of the Senate battleground, the Democratic candidate has tracked closely with Biden’s support among Democrats and independents, while the Republican underperforms Trump among voters in the middle and the party’s base. 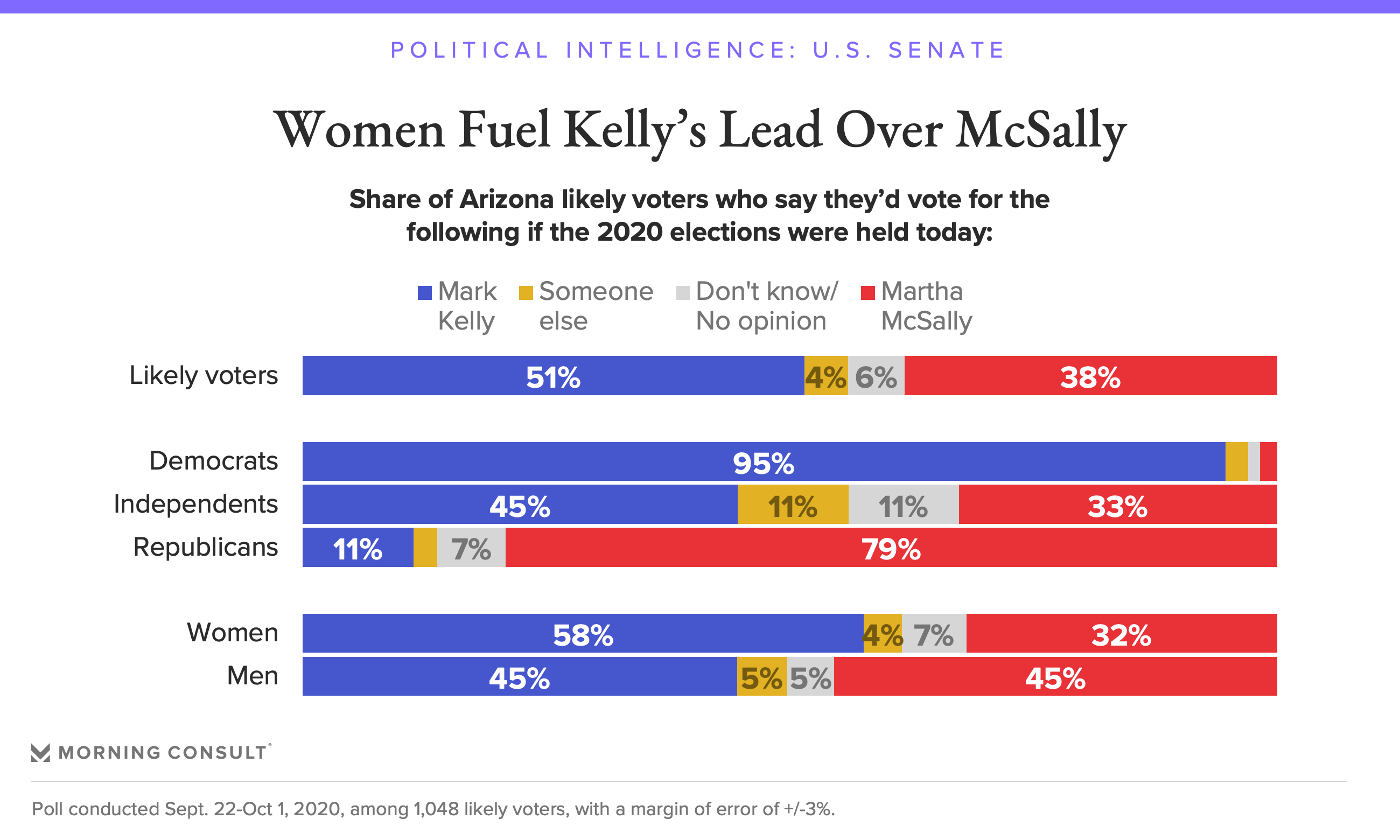 McSally trails Kelly by 12 points among independents. Among women, a key bloc in the suburbs of Maricopa County, Kelly has a 26-point lead over McSally, who hasn’t broken 40 percent among the demographic since tracking began in July.

She also is relatively weak among Republican voters, with only 79 percent saying they would vote for her if the election were held today.

Both the Kelly and McSally campaigns declined requests to interview the candidates.

It seems like they’re making the same mistakes they made in 2018: Embracing that Trump base in her votes and her narrative.

One GOP strategist in Washington said Arizona Republicans who aren’t currently indicating their support for McSally are likely to fall in line as Election Day approaches, but that may not be enough for her to win unless Trump improves his standing there. Former Arizona House Speaker Kirk Adams, a Republican who served as Ducey’s chief of staff until the end of 2018, raised a similar concern given the “accelerant” the Trump presidency has poured on the state, a once-reliable Republican stronghold that Coughlin projects will produce a record-low turnout edge for the GOP this year despite its registration advantage.

McSally’s polling disparity has persisted as summer turned to fall, with several Democratic and Republican strategists interviewed in recent days saying that McSally’s campaign is failing to reach beyond the GOP’s most ardent supporters.

“It seems like they’re making the same mistakes they made in 2018: Embracing that Trump base in her votes and her narrative,” said Chad Campbell, a Democratic strategist and the former Arizona state House minority leader.

McSally’s campaign has sought to play up credentials with crossover appeal, highlighting her ranking as the sixth-most bipartisan senator (right behind Sinema) by the Lugar Center and Georgetown University’s McCourt School of Public Policy and the fact that she tied in 2019 with the Senate’s most senior Republican, Chuck Grassley of Iowa, for most bills signed into law, according to GovTrack. It has run ads highlighting her support for coronavirus relief spending and legislation meant to mitigate offshoring of American jobs, and cast her as a fighter for lowering prescription drug costs.

However, Republican strategists in the state noted that her messaging has largely reflected a rock-ribbed conservative. There’s her well-covered attack on the press, rhetoric like her calls to stop the “radical Left’s government takeover of health care,” her Republican National Convention speech featuring her embrace of Trump’s re-election slogan, “Keep America Great,” and the latest example: her posture on the Supreme Court vacancy. Within hours of the news of Supreme Court Justice Ruth Bader Ginsburg’s death on Sept. 18, McSally called for the Senate to take a vote on Trump’s nominee before one was even named.

“She’s struggled to be able to talk to those voters who left her last time in the Sinema race and who continue to be a problem for Republican candidates,” said Coughlin, noting the tough balancing act she faces in trying to hold onto backing from Trump supporters while also expanding her appeal.

On air, McSally and her allies have spent much of their time painting Kelly as a crooked businessman with ties to China and an acolyte of liberals in Washington. While everyone attacks their political rivals, “she’s not been able to tell her story in a way that connects with voters,” said Campbell.

Robert Graham, the former chairman of the Arizona Republican Party, said the attacks have taken a toll on Kelly, but that alone doesn’t cut it in the suburbs, where conservatives have lost ground. He urged Republicans to embrace the message of “jobs, opportunity, prosperity and safety” to appeal to voters’ center-right roots, lauding a move last month by the McSally campaign to burnish her personal image and make a positive case about why she should be elected.

Up to this point, Kelly’s run the race that he needs to run to win in Arizona.

In late September, before early voting was set to begin on Oct. 7, her campaign begin airing a commercial highlighting her own personal story, including her father’s death when she was 12 years old, her recent allegation that she was sexually abused by a high school coach five years later, and her status as the first woman to fly a fighter jet in combat.

“If you want flashy, you’ve got a guy,” she said of her rival in the spot. “But if you want a fighter, I’m your girl.”

The ad hit the state’s commercial airwaves after months of health care-focused attacks from Democrats, who see the race as a prime opportunity to knock off a Republican incumbent in their bid to regain control of the Senate after six years in the minority. The top-tier race has brought in a surge of cash to the state, with Kelly outraising the incumbent senator via a campaign conducted largely on television and online amid the pandemic.

Adams said the pandemic has given Kelly an enviable opportunity for a candidate in a top-tier Senate race to lay low. While other Republicans have accused Kelly of “hiding in the basement,” his largely friendly outings have helped him employ the tried-and-true strategy of Arizona Democrats such as Sinema, who recently cut an ad for his campaign, in mostly steering clear of hotly partisan issues and focusing on those with wider appeal, such as health care, Adams said.

“The McSally approach appears to be similar to the approach they took in 2018,” he said. “Up to this point, Kelly’s run the race that he needs to run to win in Arizona.”