For Brands, Getting Out the Vote Can Also Mean Getting Into Consumers’ Good Graces

In the lead-up to the 2020 election, consumer facing brands in nearly every industry have been persuading their customers to do more than buy their wares — they’re also encouraging them to exercise their right to vote.

Starbucks Corp. announced a plan to help its employees and consumers find time and resources to vote, while agencies such as WPP PLC’s GroupM and the entirety of Omnicom Group Inc. are giving their workers Election Day off; Chipotle Mexican Grill Inc. debuted “CHI-VOTE-LE” T-shirts; Live Nation is converting some of its venues into voting locations; and Facebook Inc. and Twitter Inc. are directing users to register to vote via their platforms.

Civic engagement initiatives are hardly seen as a risky move for brands, even given the divisive state of U.S. politics, and a new Morning Consult survey found that companies indeed stand to gain more than they lose from voter registration efforts. (In the coming weeks, Morning Consult will be releasing an extended report deep-diving into American consumers’ sentiment toward brands’ engagement with politics and the 2020 election season.) 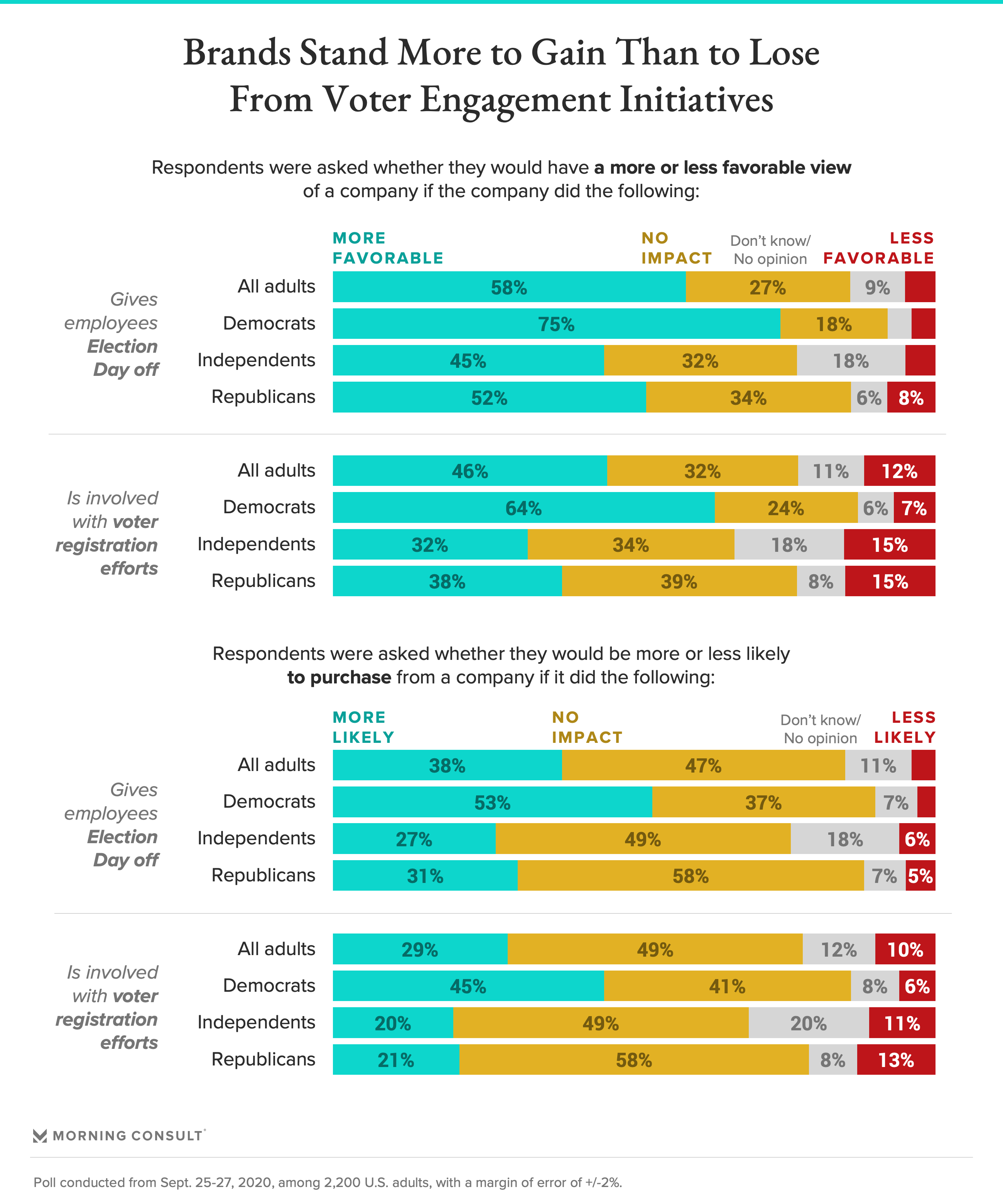 While a 49 percent plurality of Americans said that branded efforts tied to voting do not impact their purchasing decisions, many said they’d view companies that give employees Election Day off or promote voter registration in a more positive light.

Brands with more politically progressive audiences might see greater boosts in their favorability ratings tied to voter engagement initiatives, according to the survey, conducted Sept. 25-27 among 2,200 U.S. adults, but even companies that serve wide ranges of consumers likely won’t alienate conservative shoppers.

In fact, as these sorts of corporate pushes become more common, marketing and political experts said brands that stay silent on the topic of voting could risk attracting negative attention as they appear to be less civically engaged than those working to get out the vote.

“The more companies there are that are doing this, the safer it gets for all of them,” said Christopher Mann, an assistant professor of political science at Skidmore College. “I think we’re definitely over the threshold broadly where it’s sensible to think that there’s very little risk in this. The bandwagon is rolling.”

For brands new to civic engagement, partnering with organizations such as Rock the Vote, a nonpartisan nonprofit dedicated to empowering young people, could help ensure successful and accurate voting information campaigns.

Last year, Rock the Vote built on decades of corporate partnerships by formally creating Brands for Democracy, a group within the organization focused on offering services to brands such as building customized, digital election centers for consumers to find information about voting deadlines, registration and more.

This year’s Brands for Democracy partners include more than three dozen brands such as Gap Inc. and its Athleta brand, Comedy Central, DoorDash Inc., Hulu, WarnerMedia and HBO, with interest spiking significantly since the 2016 election.

“We almost can’t respond to the amount of interest we’ve received,” said Mindy Maschmeyer, Rock the Vote’s vice president of marketing and brand partnerships. “We’re seeing brands stepping up in a way they haven’t before.”

For instance, Maschmeyer named retailer Zumiez Inc. as a first-time partner, and an influential one at that. The clothing brand is especially popular with Generation Z, a bloc that Rock the Vote gives special attention to as first-time voters, and one that looks to brands as trusted sources of information, Maschmeyer said.

Young voters require assistance this year more than ever before, said Laurel Weir, the head of strategic insights and research for the entertainment and youth group at ViacomCBS Inc., including MTV, which in 1990 became the first partner of Rock the Vote.

“Gen Z in particular is a generation defined by anxiety,” she said. “Between the pandemic, racial injustice and a stalled economy, and with many of them entering voting age, registration troubles are increasing that already-high anxiety.”

More so than just within Gen Z, however, brands have a unique opportunity to spread information about voting more widely, said Brianna Cayo Cotter, head of social impact for ViacomCBS’ youth and entertainment brands.

Whereas typical partisan voter engagement initiatives tend to target likely voters who are already politically active, brands have the opportunity to reach out to those who are less likely to receive information about voting from political groups, Cotter said.

“I think every brand has a responsibility to get this critical voting information in front of whatever audience they reach,” she said.

Corporate efforts are likely only increasing registration rates among customers by 1 or 2 percentage points, and overall turnout even less so, said Mann, the Skidmore professor.

But brands are using tactics proven to be effective by civic and political organizations, he said, so given the widespread effort among various companies, they do have the potential to influence the outcome of close elections.

“We’re not talking about these corporate efforts reshaping the American electorate,” he said. “On the other hand, we have elections every year where adding a few hundred votes or a few thousand votes can make a real difference.”