Biden’s Road to Victory Is Paved by Women

Women make up a majority of the American electorate, and with less than a month to go to Election Day, they’re solidly behind Democratic presidential nominee Joe Biden. 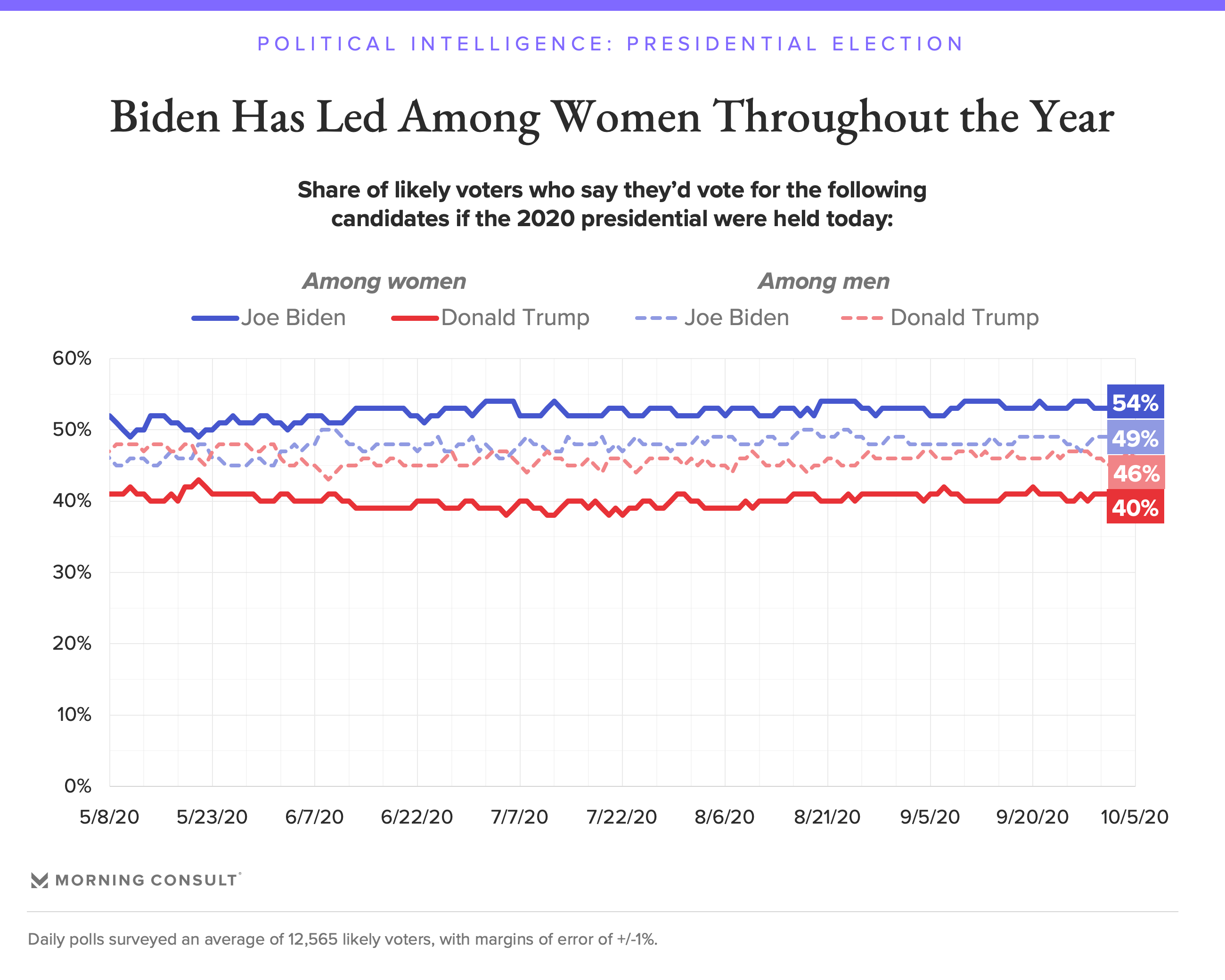 Biden’s double-digit lead with the group, which makes up 53 percent of likely voters this year, is similar to the advantage he’s held since the summer, and is larger than the 3-point lead (49 percent to 46 percent) Biden currently holds among men, a group Trump won in 2016 by 2 points, according to Morning Consult’s exit polling at the time.

Among women, Biden is outpacing Democrat Hillary Clinton’s final vote share by 5 points, according to the exit polling, while Trump is underperforming his final standing by 7 points.

Trump’s relationship with women has been fraught since he entered the political picture. While women generally tend to favor Democratic candidates — a trend that has only accelerated in recent years — there are issues specific to the president that may color their perceptions of him, such as his history of infidelity, the multiple allegations of sexual misconduct against him and his litany of derogatory and sexist comments aimed at women and female political rivals.

This year, Trump’s sought to make inroads with the bloc, dispatching surrogates to events meant to highlight support from women, and working in particular to use housing policy and the unrest surrounding the Black Lives Matter protests to shore up support among white women who live in the suburbs, whom he’s dubbed “suburban housewives.”

But those voters, who helped fuel the Democrats’ takeover of the House in the 2018 midterm elections, haven’t come back to the president. The survey found Biden leads Trump among white suburban women, 51 percent to 44 percent. 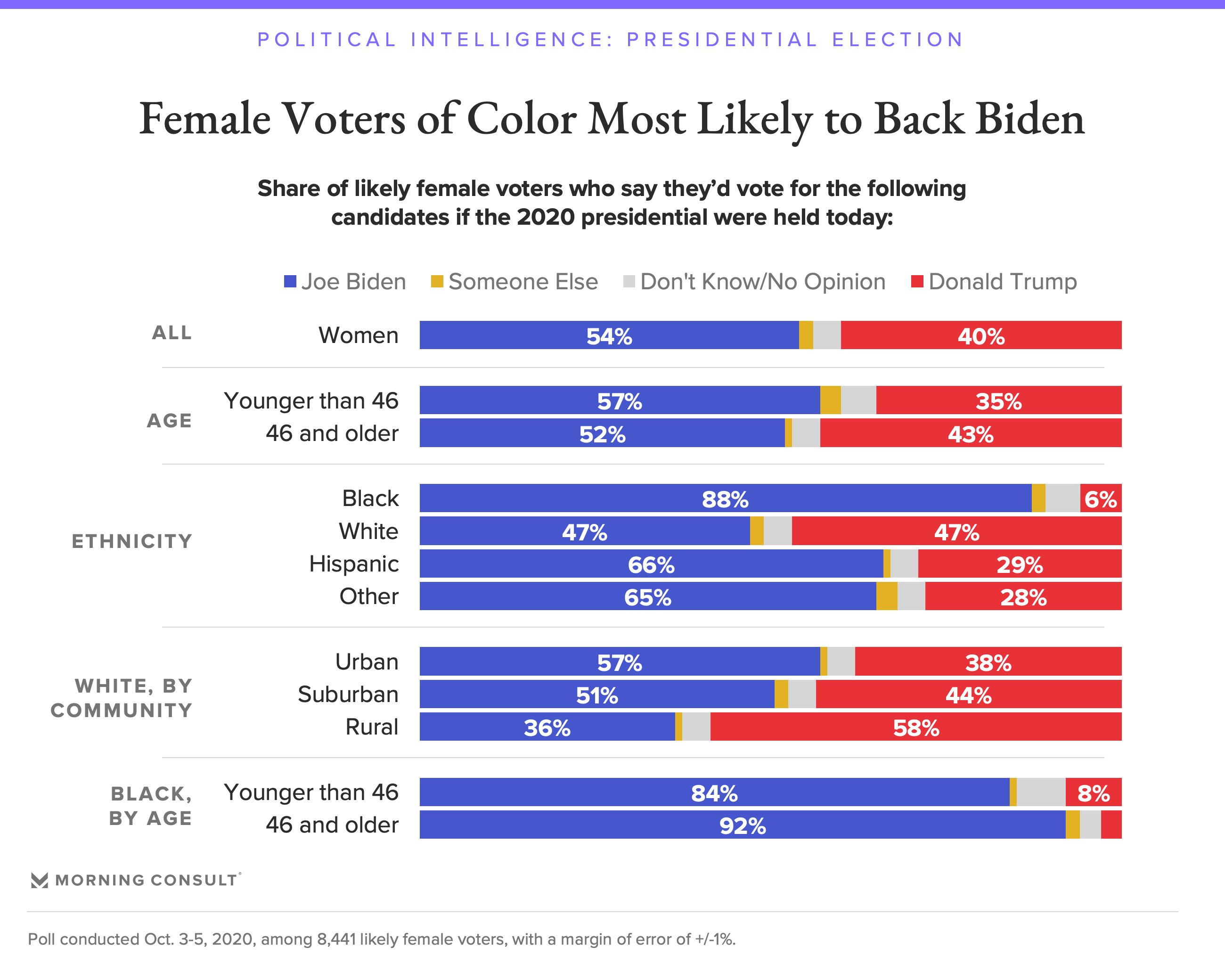 Biden is tied with Trump among the broader pool of white female voters, a group that exit polling showed the president winning by 9 points four years ago. While white women in urban settings favor Biden by a heavy margin, Trump is similarly favored by white women in rural communities.

Biden leads Trump, 88 percent to 6 percent, among Black women, who helped fuel his Democratic primary victory earlier this year with wins in South Carolina and other Southern states on Super Tuesday. The oldest Black women — those over the age of 46 — are most likely to back BIden, but he also holds a commanding lead among those on the other side of the age divide.

Biden’s strength with Black female voters tracks with their largely positive views of him: 84 percent have a favorable view of the man who served as the No. 2 to Barack Obama, America’s first Black president, while 87 percent have unfavorable views of Trump. 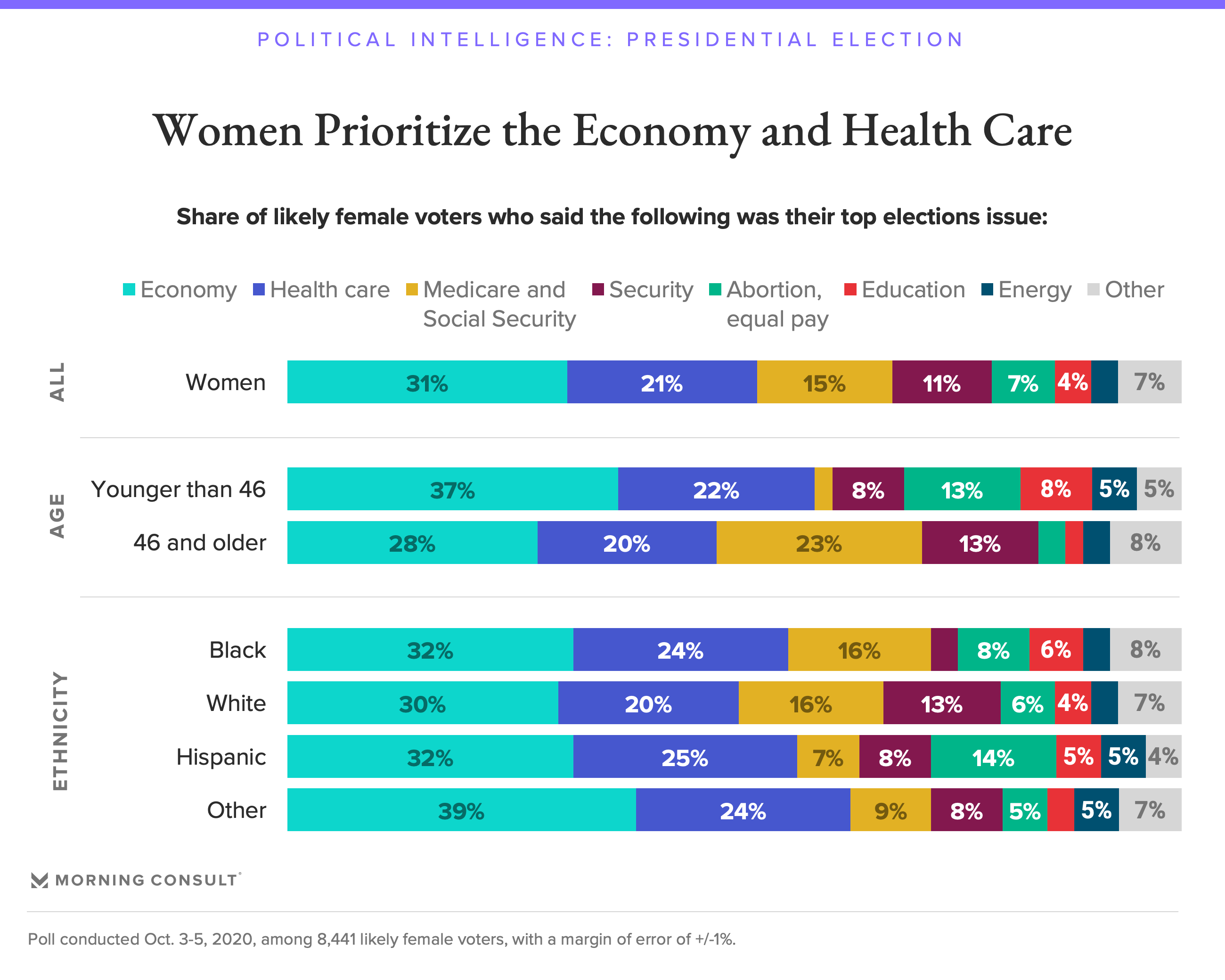 Those younger women are more likely to cite economic concerns — such as taxes, wages, jobs, unemployment and government spending — as their top election issues than older women. They’re also more likely than older female voters to prioritize issues that predominantly affect women, such as birth control, abortion and equal pay.

Overall, women — including Black, white and Hispanic voters — are about as likely as the overall electorate to prioritize the economy (31 percent to 33 percent) and health care (21 percent to 20 percent).