Biden Has a Fighting Chance in Texas. Can MJ Hegar Ride His Coattails to the Senate? 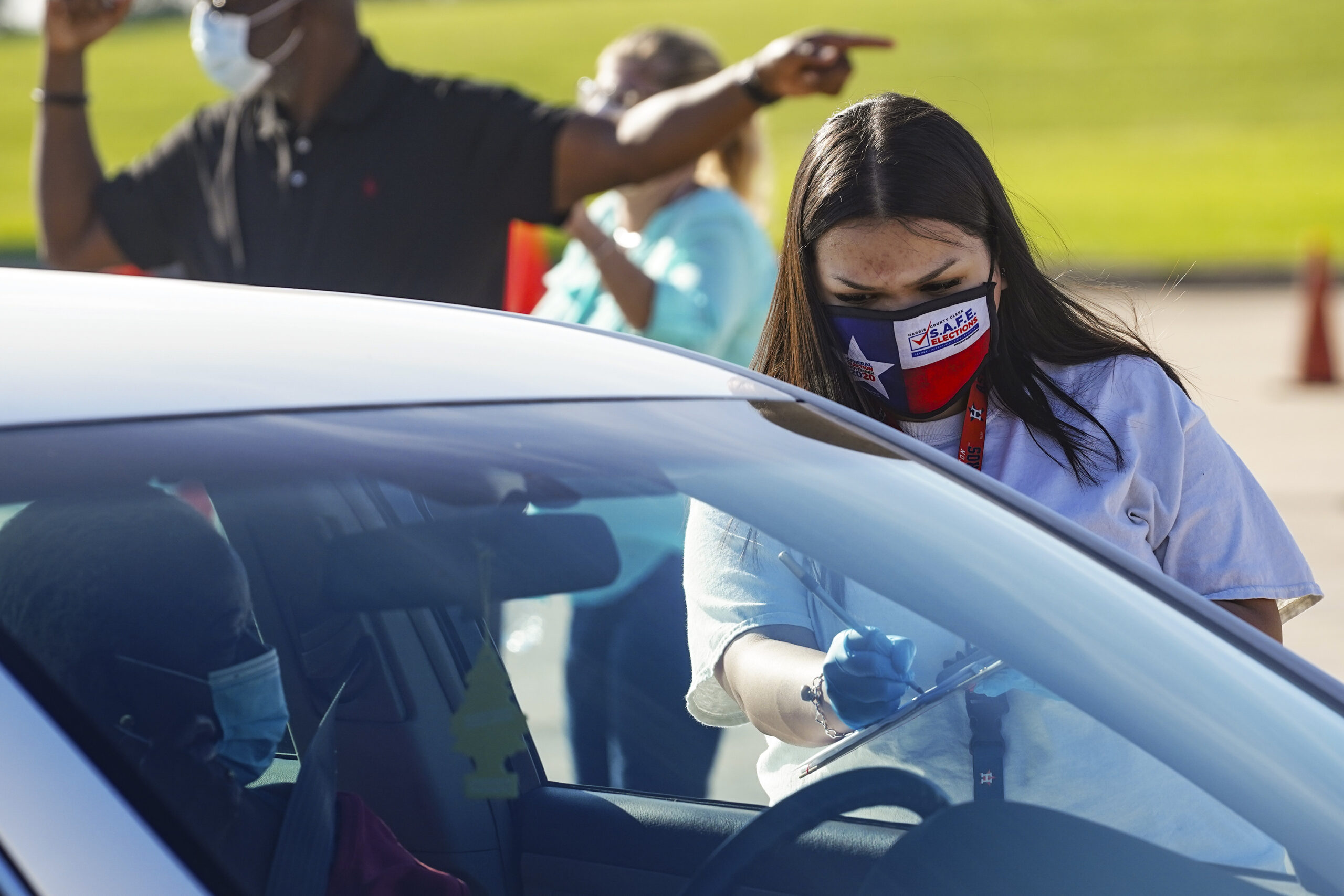 An election worker accepts mail in ballot from a voter at drive-through mail ballot drop off site at NRG Stadium on Oct. 7, 2020 in Houston. GOP incumbent Sen. John Cornyn leads his opponent, MJ Hegar, by 9 points in the state. (Go Nakamura/Getty Images)
By Eli Yokley

This is the eighth in our “Majority Makers” series, a race-by-race look at the contests that will decide control of the Senate in 2021. See our previous dives on Arizona, South Carolina, Colorado, North Carolina, Kansas, Michigan and Iowa.

Across the Senate battleground, several Republican senators have underperformed President Donald Trump’s standing against Democratic nominee Joe Biden, fueling Democrats’ hopes of knocking off incumbents in states like North Carolina and Arizona, where the top of the ticket contest is razor thin.

In Texas, that dynamic is flipped: As she faces off against Sen. John Cornyn, Democrat MJ Hegar has consistently underperformed Biden in the Lone Star State, driven by her relative weakness among Democrats and voters of color, according to Morning Consult Political Intelligence tracking. 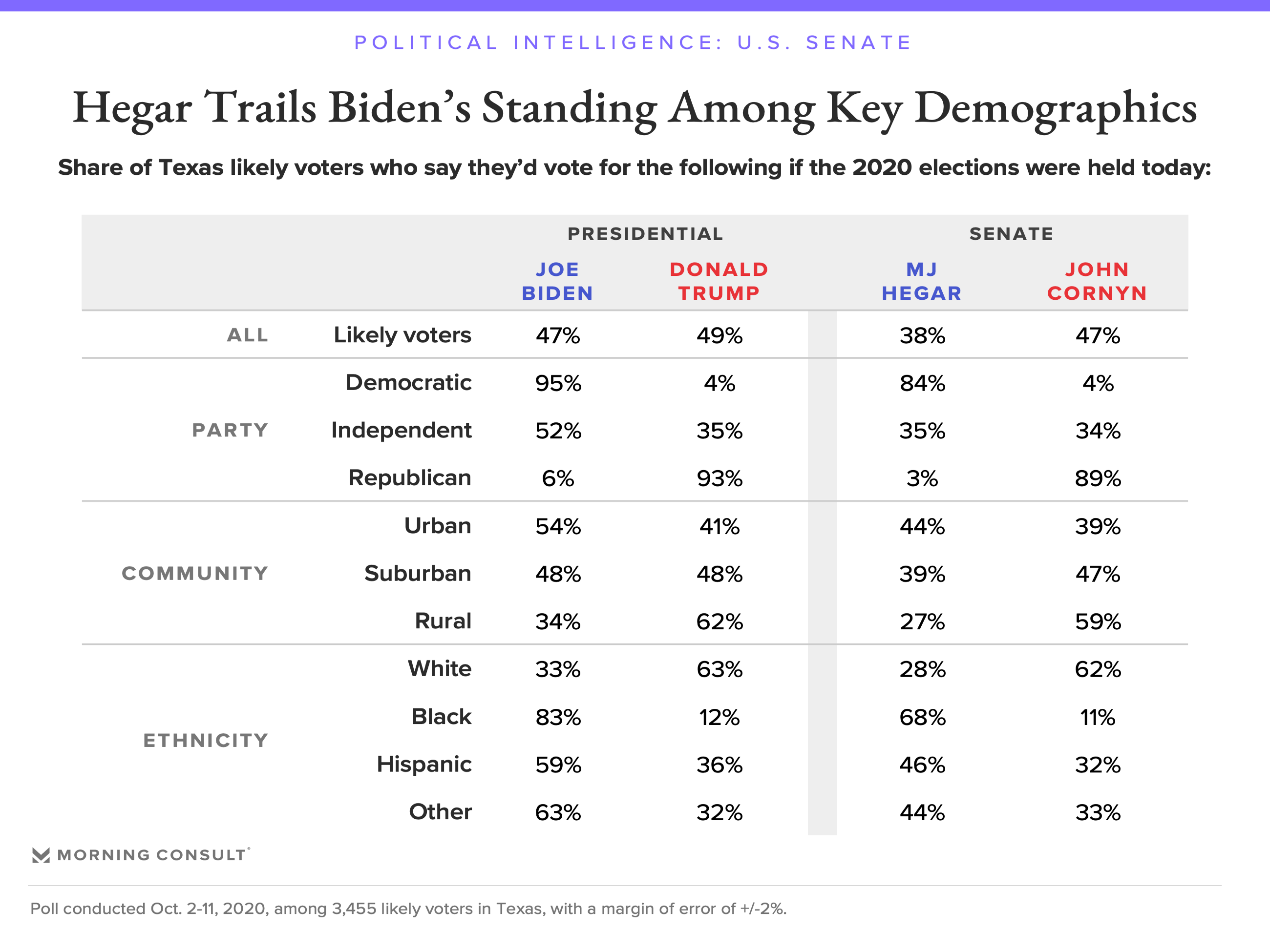 The latest polling — conducted Oct. 2-11 among 3,455 likely voters in Texas — found Hegar trails Biden’s support among Democrats by 11 percentage points (84 percent to 95 percent), Black voters by 15 points (68 percent to 83 percent) and Hispanic voters by 13 points (46 percent to 59 percent), while Cornyn roughly matches Trump’s standing with voters of color and the GOP base.

With just three weeks until Election Day and early voting now underway, Keir Murray, a Houston-based Democratic strategist, said Hegar has “got to introduce herself to a lot of base Democratic voters, particularly Black and Latino voters who don’t know her and who didn’t vote in the primary or voted for someone else.”

Despite the late timing, Hegar has the money to do it: In the third quarter, she raised $13.5 million and had more than $8 million in the bank, helping her recently outpace the Republican incumbent on television as the Biden campaign has begun to invest more resources there. And Morning Consult polling suggests many of those voters are up for grabs, with roughly 1 in 5 Black and Hispanic voters saying they’re still undecided.

Matt Langston, a Republican strategist who lives in Austin, said Cornyn has a numerical advantage due to the state’s large share of Republican voters. But, he said if Democrats can succeed in activating voters of color — as former Rep. Beto O’Rourke, the 2018 Democratic Senate nominee, has tried to do with his “Powered by People” group — it would be a potential game changer, since Texas is home to the largest number of Black people and the second-largest Hispanic population in the country.

“The Democratic Party has been trying to do that for years and years, and they’ve failed every time,” he said in a reference to past electoral outcomes, adding that a surge in voter registration does not necessarily equate to votes for your candidate at the ballot box.

Amanda Sherman, a spokesperson for Hegar’s campaign, said, “We are proud to be running a grassroots coordinated campaign to turn out voters across the state, including Black and Latino Texans, who we know are critical to our mission to defeat John Cornyn.” She noted that the campaign was part of an effort last month to contact 1.3 million unregistered Texans ahead of the voter registration deadline in what she called the largest voter registration effort in the history of the Texas Democratic Party.

In recent days, Hegar began to leverage an influx of cash to lay out the stakes of the election with two “seven-figure outreach” efforts aimed at turning out voters of color, according to her campaign. A new Spanish-language campaign targeting Latino voters pushes a biographical message, highlighting her status as a mom and military veteran who “called out Trump for separating children from their mothers.” Another new spot, which is aimed at Black voters, casts Cornyn as an extension of Trump, and urges people to “vote Democrat, all the way down the ballot.”

Bill Miller, a Texas lobbyist who managed Cornyn’s first statewide campaign in 1990, said the public dissatisfaction raised by Hegar’s primary opponent, Royce West — a prominent Black Democratic state senator who on Oct. 9 told the Austin American-Statesman that he would not vote for her — is a liability for Hegar. But he cautioned that Republicans backing Cornyn’s re-election shouldn’t rest on the state’s Republican history for an automatic victory, given a recent influx of less reliably conservative voters in the state. 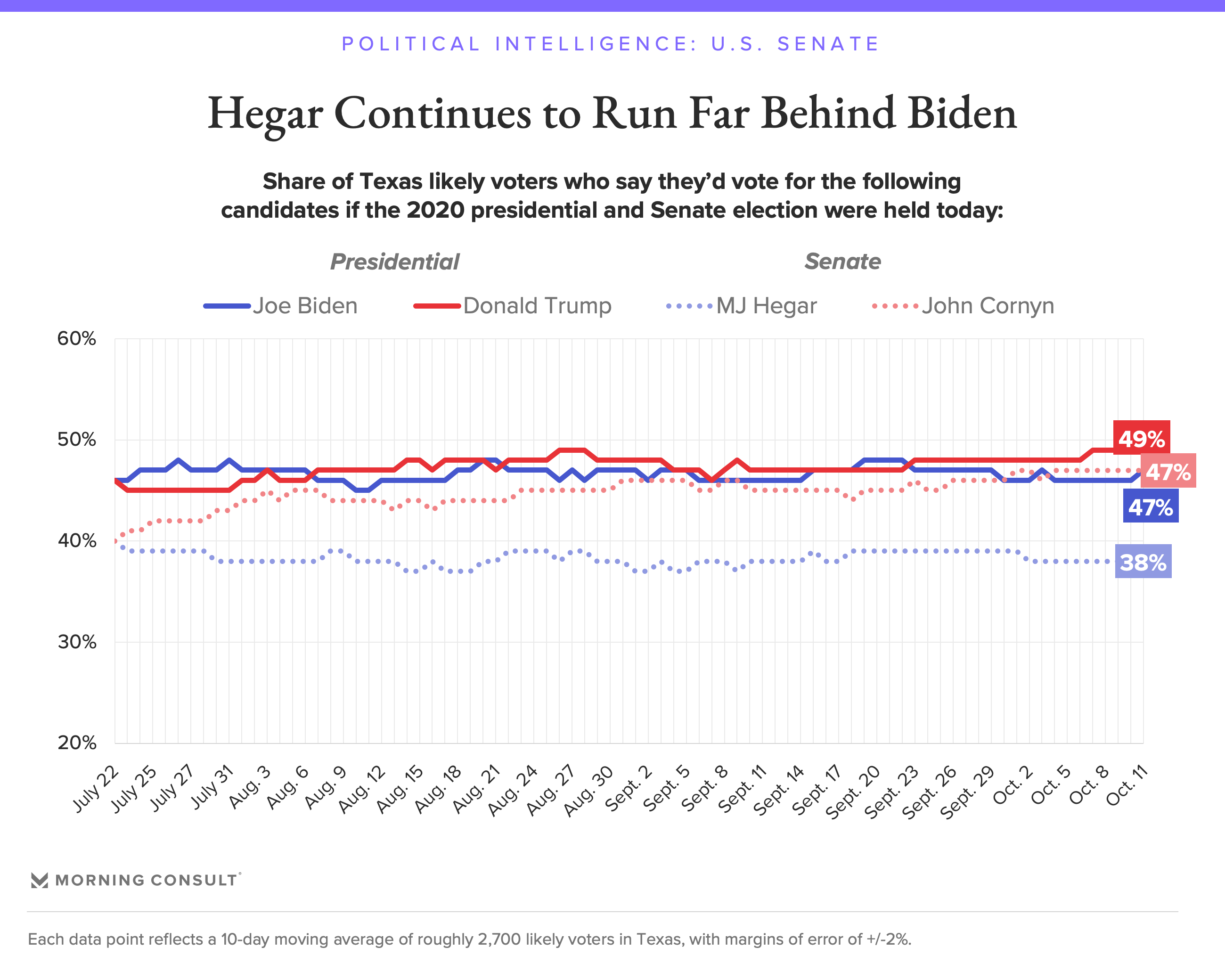 Overall, the polling has consistently shown a tight race between Trump and Biden, with Trump leading by 2 points, 49 percent to 47 percent, in the latest figures, which have a 2-point margin of error. By comparison, Cornyn holds a 9-point lead over Hegar, 47 percent to 38 percent. But while 3 percent are undecided in the presidential race, 12 percent are undecided in the Senate contest, leaving room for both candidates to pick up votes.

One Democratic strategist in Washington noted that the polling does not suggest a large share of Biden-Cornyn voters exist, but rather that Hegar has work to do in order to match Biden’s standing in the state and create a stronger contest in the final weeks.

“Her hurdle is there are more Republicans than Democrats in Texas,” said Langston, the Republican strategist. “How do you get folks to cross over? It’s not about messaging, but about getting out the vote.”

For his part, Cornyn — whom more than 3 in 10 Texas voters said they did not know or had no opinion of in the fourth quarter of 2019, despite his nearly two decades in the Senate — has sought to reintroduce himself to voters. In campaign spots, he has highlighted his support for legislation aimed at identifying child sexual abuse early, his support for hurricane disaster relief and opening schools safely amid the pandemic. The senator, whose campaign declined to comment on the record for this story, has also attacked Hegar over policies on energy and policing with a message aimed at voters’ conservative roots that she’s “too liberal” for Texas.

Nancy Bocskor, former director of the Center for Women in Politics and Public Policy at Texas Woman’s University, said part of Hegar’s challenge has been convincing voters to link Cornyn and Trump, particularly when it comes to the president’s traits that have irked educated voters and those in the suburbs Cornyn’s messaging appears to target.

Cornyn “doesn’t present as offensive,” she said. “He doesn’t have that combativeness like Ted Cruz or Donald Trump. That makes it more difficult for MJ to gain traction to knock off an incumbent, unless there’s a major tidal wave election.”