Dr. Anthony Fauci’s Vaccine Guidance Most Likely to Encourage Voters to Get Vaccinated 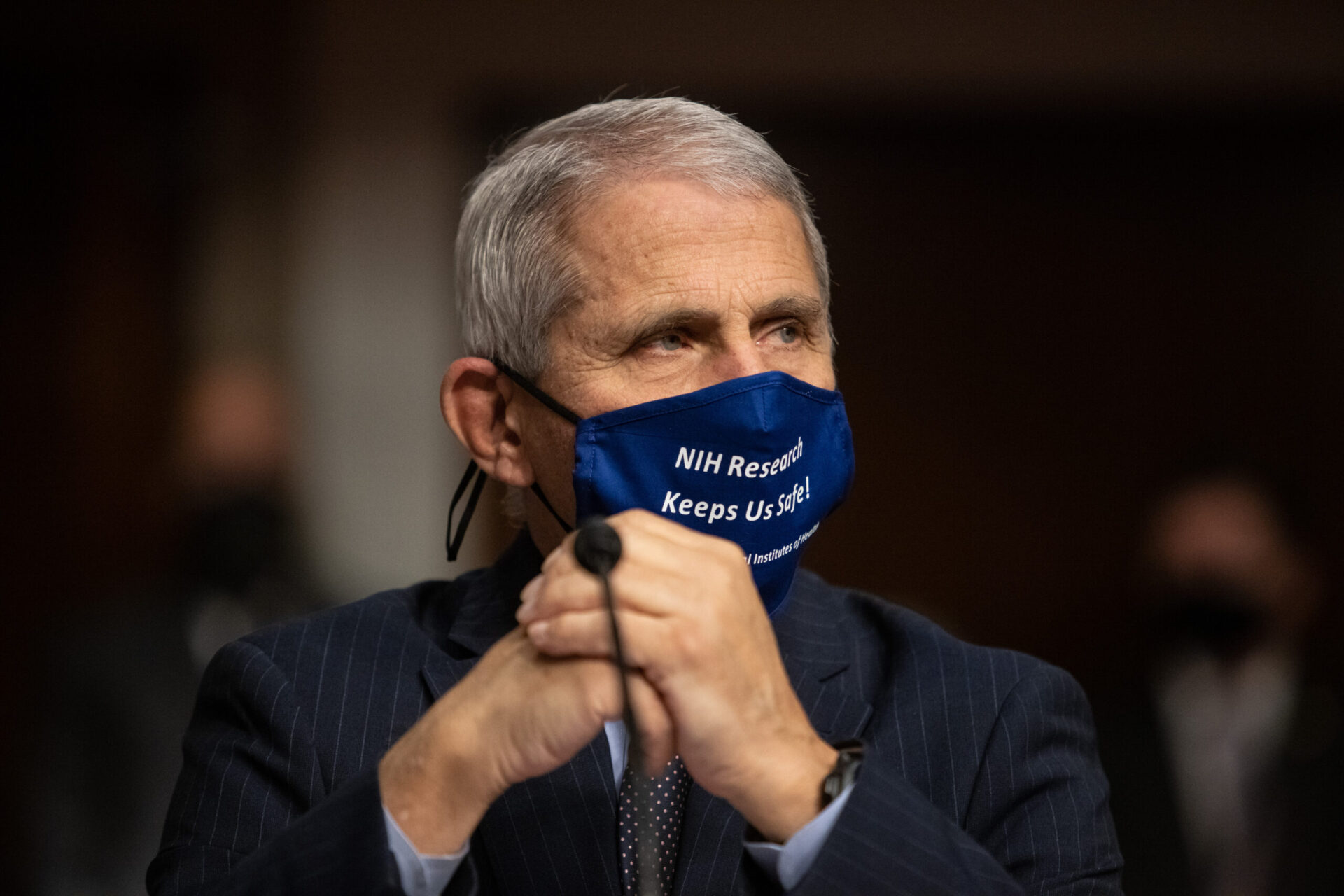 A new Morning Consult poll found that 47 percent of registered voters say they would be more likely to get a coronavirus vaccine if Dr. Anthony Fauci, pictured during a Senate hearing on Sept. 23, 2020, recommended it. (Graeme Jennings/Getty Images)
By Gaby Galvin

When it comes to voters’ willingness to seek a coronavirus vaccine, recommendations from federal health agencies hold significantly more weight than guidance from politicians, and nobody’s word is valued above that of the nation’s top infectious disease expert, Dr. Anthony Fauci.

That’s the consensus of a new Morning Consult/Politico poll that surveyed voters’ trust in institutions including the Centers for Disease Control and Prevention and the Food and Drug Administration, politicians such as President Donald Trump and Democratic presidential nominee Joe Biden and top officials from the Department of Health and Human Services, the CDC and the FDA, as well as pharmaceutical companies, scientists working outside of the government and the media.

In general, voters were more likely to say they’d be influenced to seek a coronavirus vaccine by agencies such as the CDC (45 percent), National Institutes of Health (41 percent) and FDA (36 percent) than by Trump (19 percent), Biden (26 percent) or their running mates, with Vice President Mike Pence at 19 percent and Sen. Kamala Harris (D-Calif.) at 23 percent. 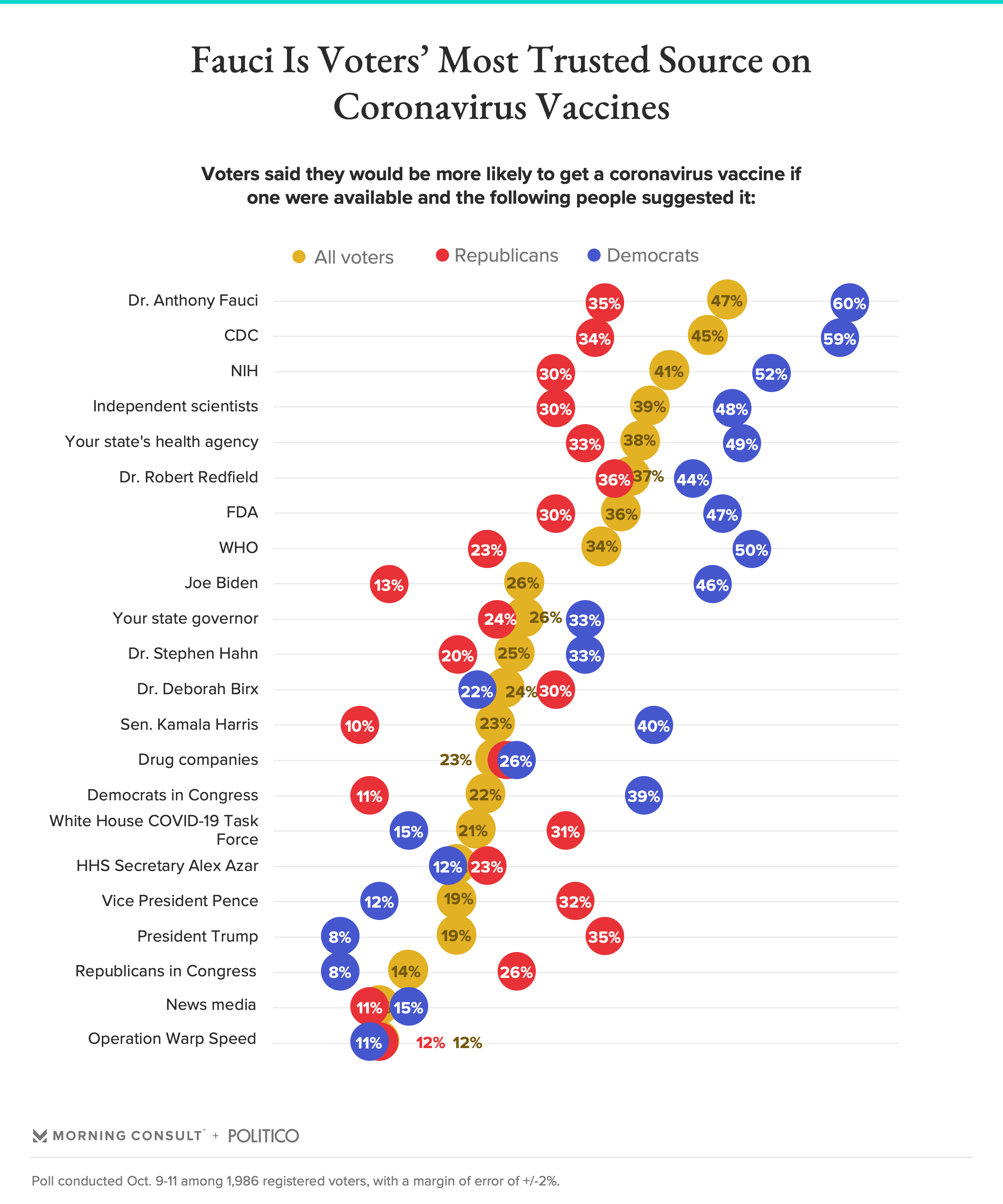 The 7-percentage-point Trump-Biden split is narrower than the divide between the two men when it comes to whom voters say they trust more to oversee the development, testing and release of a coronavirus vaccine, with Biden at 47 percent to Trump’s 36 percent. Multiple clinical trials for coronavirus vaccines and treatments have been paused for potential safety concerns recently, including Johnson & Johnson’s vaccine trial and Eli Lilly & Co.’s antibody treatment study this week, while AstraZeneca PLC’s vaccine trial has yet to resume in the United States after being put on hold Sept. 8. It’s not uncommon for drug companies to pause clinical trials, but these types of holds have garnered increased attention amid the pandemic.

Which candidate voters say would sway them to get a vaccine is heavily influenced by political affiliation, with 46 percent of Democrats saying they’d be more likely to seek a vaccine if Biden said they should and 35 percent of Republicans saying they’d probably follow Trump’s recommendation.

Thirty-five percent of voters overall said a vaccine endorsement from Trump would make them less likely to seek a vaccine, while the same share said it would have no impact on their plans. When it came to Biden, 21 percent of voters said his urging would make them less likely to get vaccinated, while 38 percent said it wouldn’t affect their decision.

The survey was conducted among 1,986 registered voters from Oct. 9-11 and has a margin of error of 2 points.

Fauci is the most influential person for Democrats and the second-most influential person for Republicans after CDC Director Dr. Robert Redfield. Both Democrats and Republicans also put a lot of stock in the CDC and their state health departments, and have little confidence in each other’s political representatives, Operation Warp Speed or the news media.

Overall, 11 percent of voters said they’d be more likely to seek a vaccine if Operation Warp Speed, the federal government’s vaccine effort, suggested it — tied for last place with the news media. HHS Secretary Alex Azar and Republicans in Congress would influence fewer than 1 in 5 voters.

For each of the people and groups featured in the survey, between 34 percent and 47 percent of voters said they’d have little influence on their decision to get vaccinated, and few of these entities were likely to turn sizable shares of voters away from a vaccine with their endorsement. In a separate Morning Consult poll conducted Oct. 8-10, 48 percent of adults said they’d seek a coronavirus vaccine if one were available today — a record low.

Meanwhile, 48 percent of voters said they think Trump is pressuring the FDA to prematurely approve coronavirus treatments and vaccines to help his re-election effort, while 34 percent said that the president’s political opponents are spreading anti-vaccine misinformation to undermine the Trump administration’s vaccine efforts. 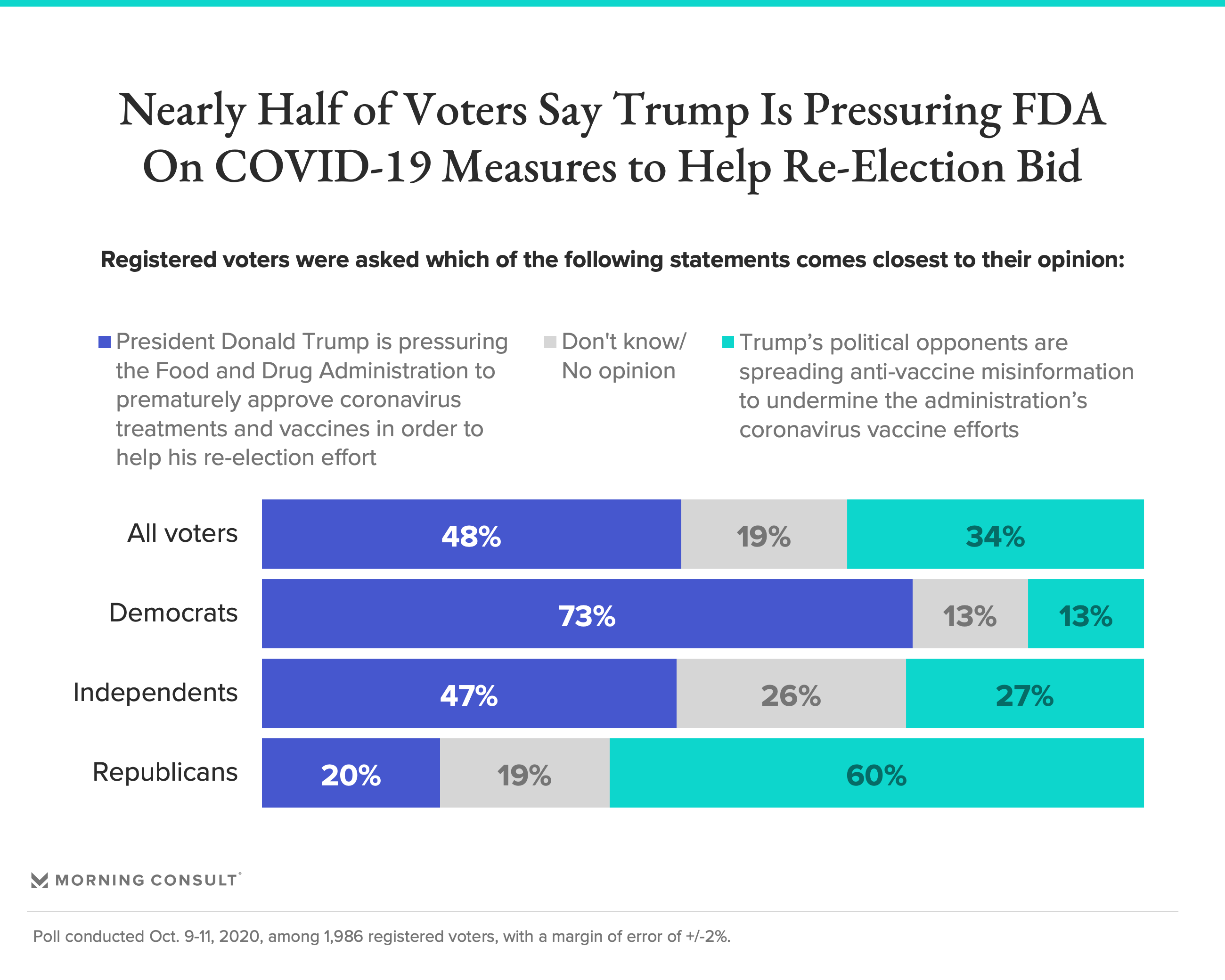 Those responses were almost entirely split along party lines, though 1 in 5 Republicans said Trump is pressuring the FDA, while 13 percent of Democrats said Trump’s opponents are spreading misinformation.