Throughout the pandemic, voters have been much more likely to approve of Fauci’s COVID-19 handling than that of Trump, Pence or Congress

Dr. Anthony Fauci, director of the National Institute of Allergy and Infectious Diseases, looks on as President Donald Trump delivers remarks about coronavirus vaccine development in the Rose Garden of the White House on May 15, 2020. (Drew Angerer/Getty Images)
By Gaby Galvin

But the two White House contenders have taken different tacks: Trump’s campaign ran an ad in which Fauci, the longtime director of the National Institute of Allergy and Infectious Diseases, seemed to praise the president’s coronavirus response, which Fauci said quoted him without his permission and “out of context.” Biden, on the other hand, has said he would ask Fauci to “stay on” as a coronavirus adviser and frequently promises to elevate the doctor’s pandemic recommendations.

According to six months of Morning Consult/Politico data, the candidates’ efforts to place Fauci in their corners is a wise strategy. Voters have consistently rated Fauci’s handling of the pandemic above that of Trump, Vice President Mike Pence, their state’s governor, the Centers for Disease Control and Prevention, the World Health Organization, Congress and lawmakers from both parties. 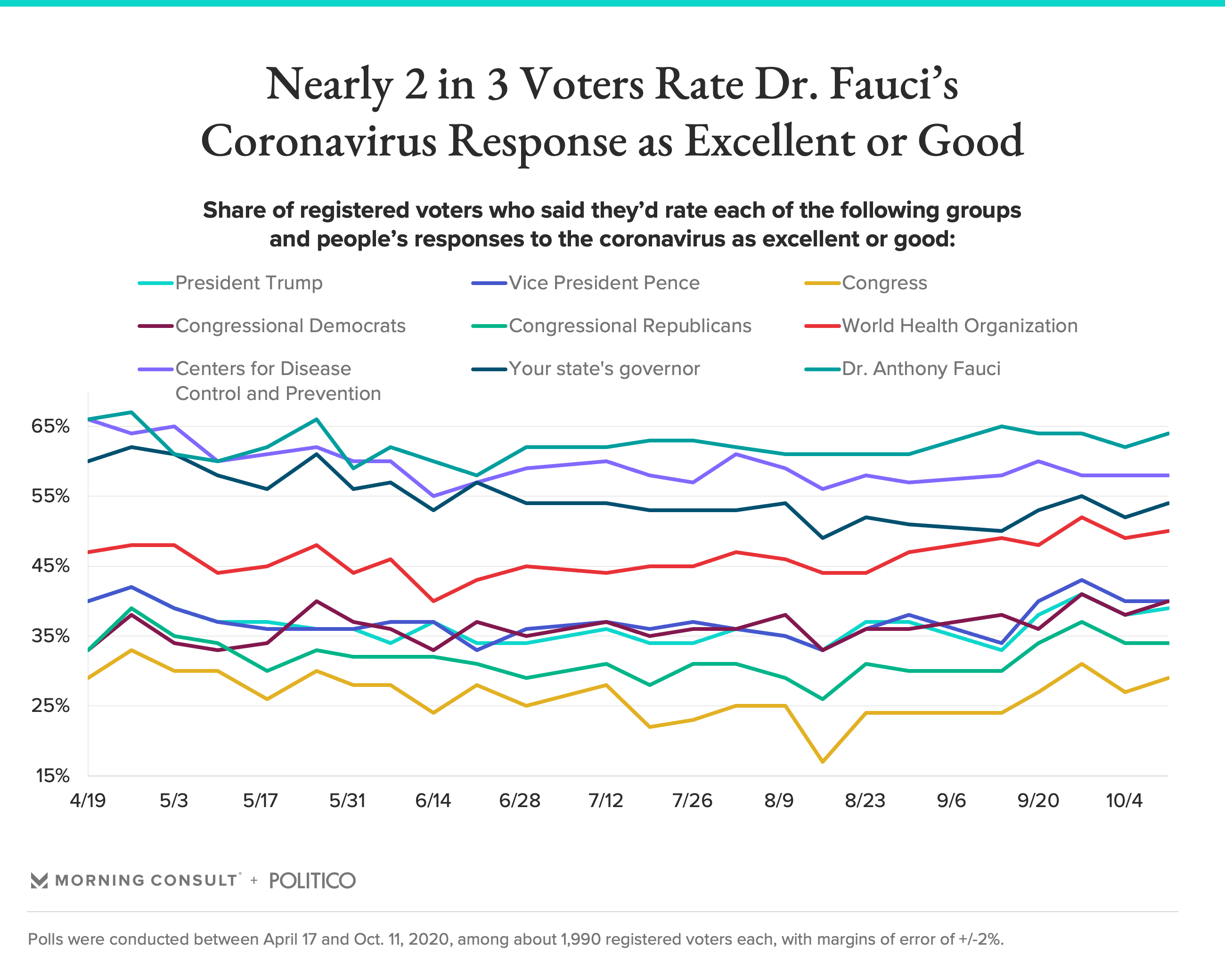 The share of voters who said Fauci’s response was “good” or “excellent” has slipped below 60 percent just twice since mid-April, both times in June. Notably, Democrats, at 79 percent, are at least 20 percentage points more likely to say he’s done a good or excellent job than independents (56 percent) and Republicans (54 percent), according to the October poll.

Trump, meanwhile, has never topped the 42 percent of voters who said his coronavirus response was good or excellent in late April, though the 39 percent who said as much in the most recent survey ranked among his highest ratings since the spring. Four in 5 Democrats said Trump’s response has been “poor,” while 48 percent of independents and 9 percent of Republicans said the same.

Voters’ “good” or “excellent” ratings of Pence and congressional Democrats have hovered around the same level as Trump, while congressional Republicans and Congress overall fared worse. In the Oct. 9-11 survey, 29 percent of voters said Congress was doing at least a good job at handling the virus.

Voters have consistently rated the WHO, the CDC and their state governors above lawmakers and the president.