In a Polarized Election Season, a Brand’s Ties to Trump Provokes a Stronger Negative Reaction Than Its Ties to Biden

74% of Democrats less likely to purchase from brands selling Trump-related goods; 57% of GOP said the same of Biden-linked brands

U.S. President Donald Trump addresses a rally in support of law and order on the South Lawn of the White House on October 10, 2020 in Washington, DC. Seventy-eight percent of Democrats said they would view a company that sold merchandise associated with the president in a less favorable light, compared to 63 percent of Republicans who said the same of brands that sell products associated with Joe Biden. (Samuel Corum/Getty Images)
By Alyssa Meyers

Even in non-election years, there’s a truism for companies that are thinking of wading into politics: If they choose to target blue or red consumers, they could be setting themselves up to see less of a color they really care about — green.

In the polarized atmosphere of the 2020 presidential election, the risk of alienating a significant consumer base is even greater, and new Morning Consult data shows that a company’s backing of merchandise linked to President Donald Trump is more likely to provoke a negative reaction among two key consumer groups, Democrats and Gen Z, compared to company support for merchandise linked to Democratic presidential nominee Joe Biden.

Almost three-quarters (74 percent) of Democrats said they’re less likely to buy from brands that offer products associated with the president. That doesn’t mean companies should promote products associated with the former vice president, however, without taking into account the risks: Fifty-seven percent of Republicans said they’re less likely to make purchases from brands that sell merchandise linked with Biden.

Partisan loyalties aside, Trump elicits a stronger negative response from the general public as well: 42 percent of all adults said they’re less likely to buy from companies that sell Trump-related merchandise, while 30 percent said the same of Biden products. 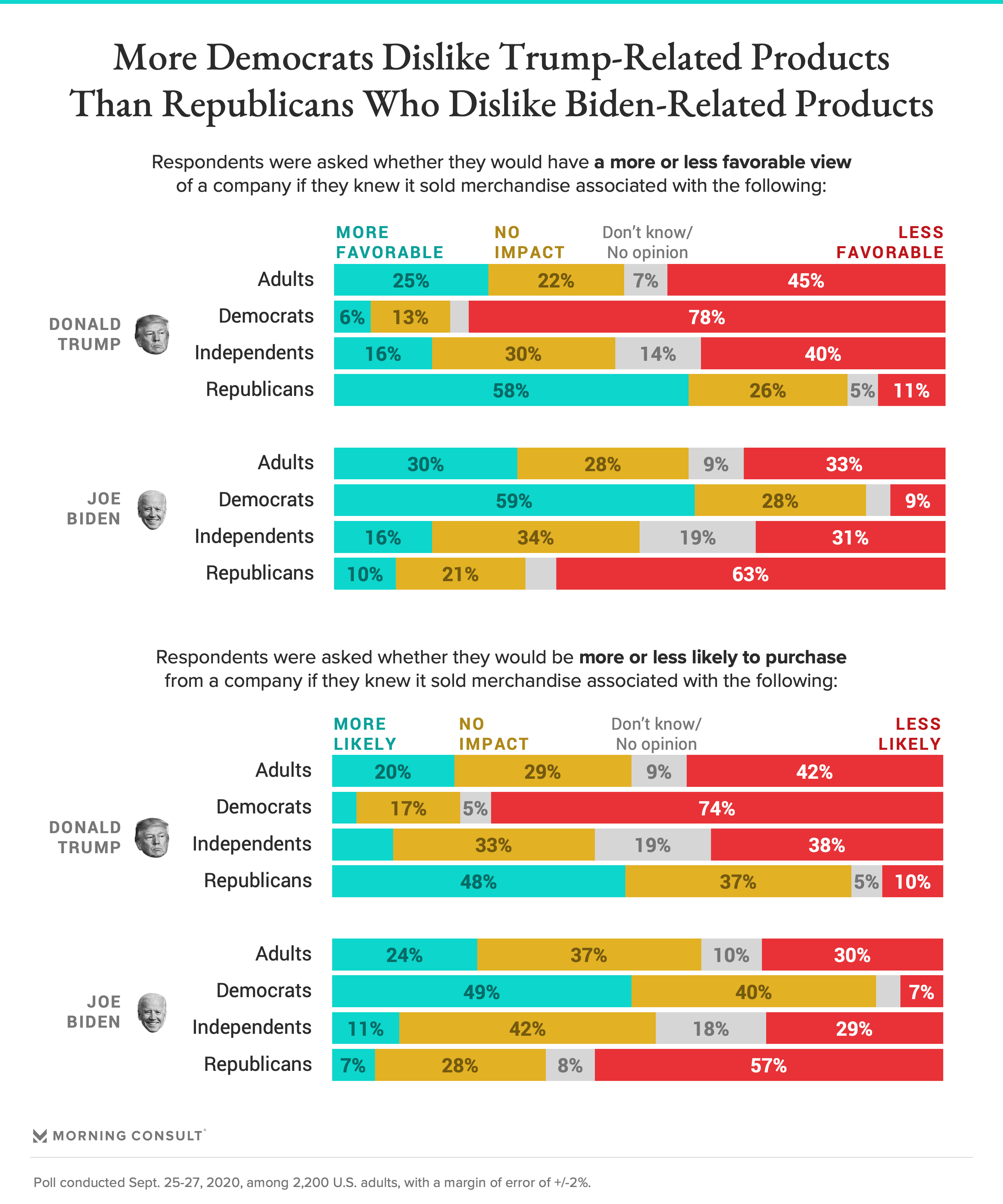 “The middle ground in terms of the way consumers are seeing candidates and parties is getting really small,” said Jennifer Scott, a clinical assistant professor for public relations and corporate communication at New York University’s School of Professional Studies who previously served as managing director for thought leadership at Ogilvy. “If you’re a brand and you want to support a candidate or a party, your chances of alienating someone are higher than they’ve ever been, so you should think twice.”

While majorities of adults on both sides of the political aisle view companies that express support for the opposition’s candidate unfavorably, brands that count on Democratic consumers should be particularly cautious about associating with President Donald Trump or the Republican Party.

Seventy-eight percent of Democrats said they would view a company that sold merchandise associated with the president in a less favorable light, compared to 63 percent of Republicans who said the same of brands that sell products associated with Joe Biden. The Sept. 25-27 poll was conducted among 2,200 U.S. adults, with a margin of error of 2 percentage points.

Forty-five percent of the public said they would look unfavorably upon brands that tie merchandise to Trump, while 33 percent said the same about brands selling Biden-branded items. Strong negative views from Democrats about the president drive the double-digit difference. 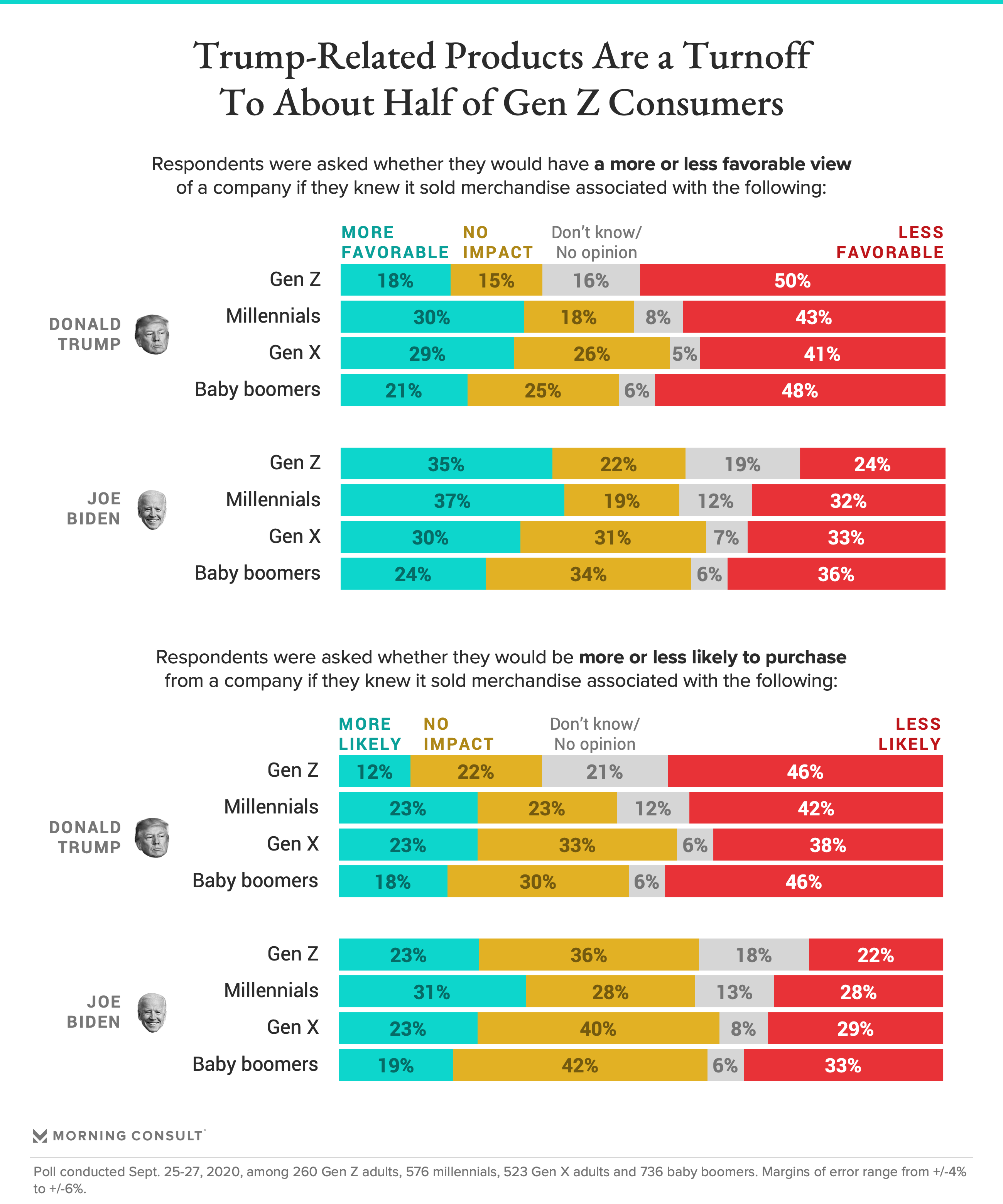 Along with baby boomers, Generation Z consumers are holding particularly tight to their wallets when it comes to brands that associate with the president: Forty-six percent said they’re less likely to buy from a brand if it sells Trump products.

The up-and-coming generation, who will account for 1 in 10 eligible voters in this election, according to Pew Research Center, is not very likely to support Trump in general, said Scott, so brands looking to lock in loyalty at a young age should avoid aligning themselves with the president.

“It’s perfectly clear that if you’re a brand and your constituency is Gen Z, don’t go near Trump,” she said. “There’s very few brands who, if they have a big Gen Z consumer base, should risk affiliating with Trump.”

Related: For Brands, Getting Out the Vote Can Also Mean Getting Into Consumers’ Good Graces

J. Walker Smith, chief knowledge officer at Kantar, generally advises brands to avoid politics. He said Republicans could be less upset at the idea of Biden merchandise because they tend to be more passionate for their candidate and apathetic about the opposition, while Democrats are the other way around.

“A lot of their emotional connection to this election is antipathy toward Trump,” he said of Democrats.

Independents are no more opposed to brands’ support of Trump than their support of Biden, but they don’t appreciate brands getting political in general, according to the survey. A slim majority of all consumers (53 percent) said they believe brands should be less involved in politics, even as brands are now expected to embrace civic engagement initiatives.

“Independents tend to see themselves as open-minded,” said Corey Ealons, a partner at public affairs and strategic communications firm Vox Global, which advises Fortune 50 companies on how to engage with politics internally and externally. “They’re not married to a particular party or candidate, but at the same time, they don’t want other portions of their lives involved with politics.”

Related: 2020 Has Upended What Consumers Expect From Brands. What Does That Mean For The Holiday Season?

However, the outcome of the election could change how some consumers view the relationship between brands and politics.

For instance, almost a quarter (23 percent) of Republicans said they want brands to get more involved in politics if Trump is re-elected, compared with 7 percent who said the same in the case that Biden is elected. And Democrats are twice as likely to say that they’d like for brands to become more political if Biden is elected (30 percent) than if Trump is re-elected (15 percent).

That statistic among Democrats is somewhat surprising for those who assume the group sees brands as a vehicle to oppose the Trump agenda, said Vox Global’s Ealons and Kantar’s Smith.

But they both said progressive consumers could also fear that if the president is re-elected, more brands would feel emboldened to speak out in his favor. On the other hand, they said, if Biden were to be voted into office, companies more aligned with left-wing beliefs could participate in supporting his policies.