The oldest Americans, who have outsize influence in elections due to their higher propensity to vote, helped fuel President Donald Trump’s victory over Democrat Hillary Clinton in 2016.

But four years later, the voting bloc is solidly behind Democratic nominee Joe Biden, contributing to the former vice president’s advantage in states that could trigger the president’s electoral defeat. 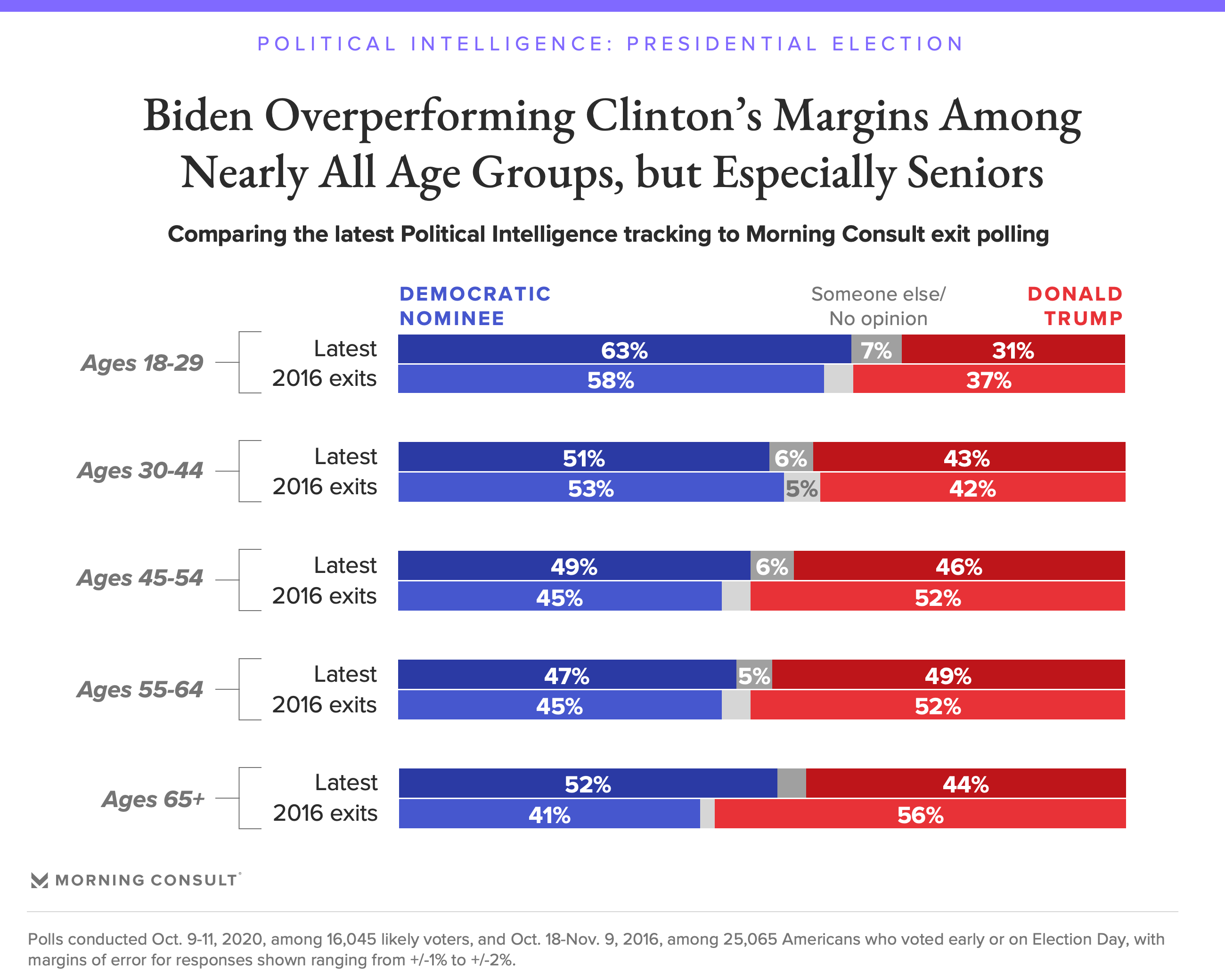 Trump is also weaker with the youngest voters than he was four years ago, despite early fears on the left about Biden’s standing with the bloc. Biden also does better with voters between the ages of 30-64 than Clinton did before him. But the shift was most pronounced among the oldest voters, helping to drive Biden’s advantage in key battlegrounds.

While middle-aged voters are more evenly divided in most states, Biden has support from the majority of seniors in Michigan, Pennsylvania and Wisconsin, according to state-level polling conducted Oct. 2-11. 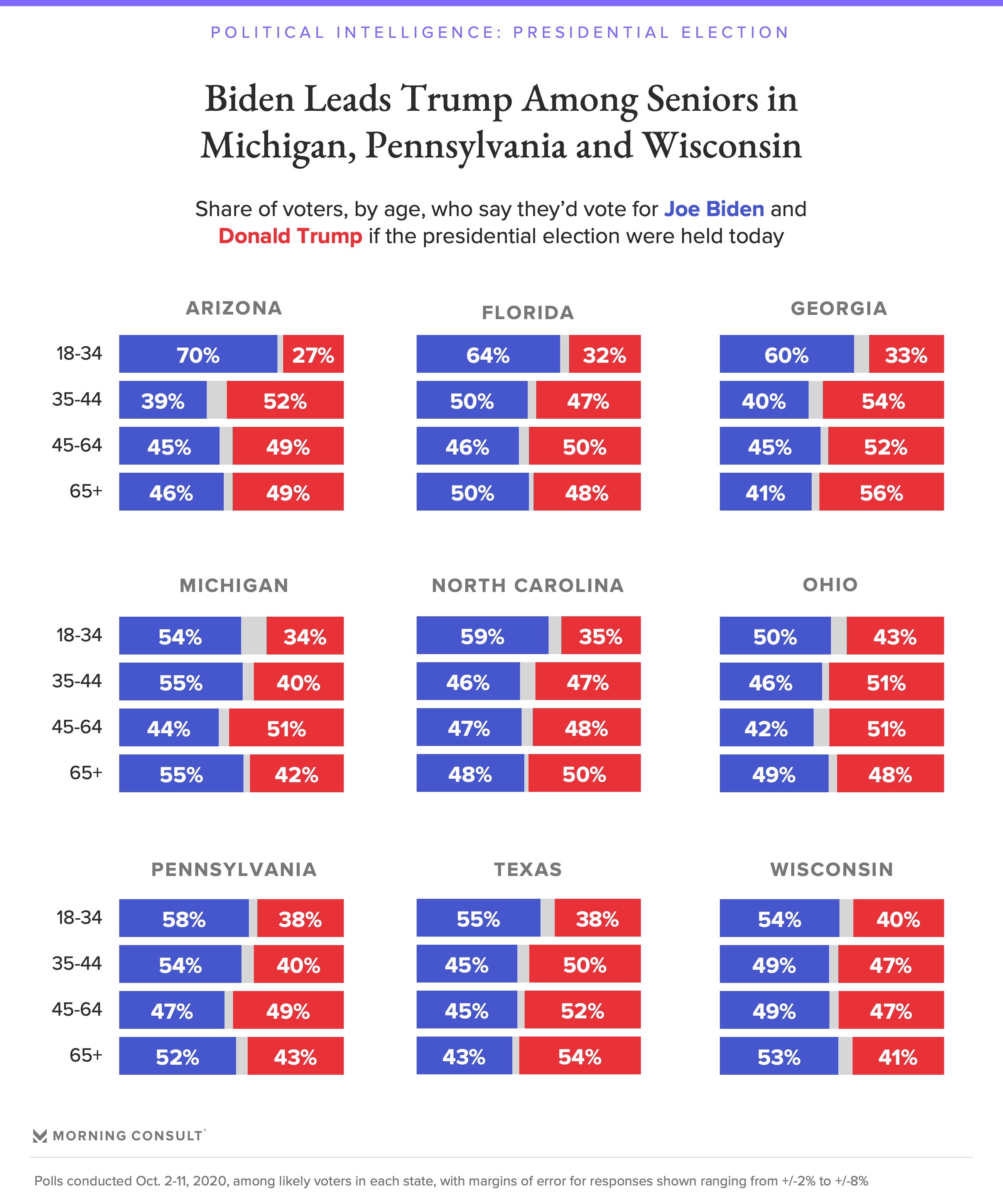 Trump is favored by the oldest voters in Georgia and Texas, where he and Biden are running neck and neck among the overall electorate, while the two are virtually tied among seniors in Arizona, North Carolina, Ohio and Florida. The Sunshine State, with its large retiree population and 29 electoral votes, has been a particular focus as the two campaigns court the oldest voters in the final weeks of the race.

On Tuesday, Biden visited a community center in Pembroke Pines, Fla., where he said “the only senior that Donald Trump cares about” is himself. (That shot appeared to prompt a mocking tweet from Trump later in the day that portrayed Biden as a resident in a home for elderly people.)

The former vice president’s trip came after Vice President Mike Pence delivered a broad stump speech over the weekend to a packed crowd at The Villages, which has been touted as the world’s largest retirement community.

Trump has made efforts to reach out directly to seniors in the days since his own COVID-19 diagnosis: In a video posted online, he called them “my favorite people in the world,” and acknowledged fears about the virus in a message aimed at a group that Morning Consult polling has found to be 7 points more likely than the average voter to see COVID-19 as a “severe” health risk in the United States, 64 percent to 57 percent.

“We’re taking care of our seniors,” he said in a message about COVID-19 treatments. “You’re not vulnerable, but they like to say the vulnerable. But you’re the least vulnerable — but for this one thing, you are vulnerable, and so am I.”

The deadly pandemic — which began to surge in the United States in March as Biden tightened his grip on the Democratic nomination — appears to have at least helped fuel Trump’s vulnerability with the group. In the weeks before the World Health Organization’s declaration of a global pandemic and Trump’s own declaration of a national emergency, Morning Consult polling of registered voters found Trump held narrow 3- to 4-point leads over Biden among voters ages 65 and up. But Biden appeared to gain a foothold after the pandemic spread, and his support has continued to grow as the case count increased.

A Pearson test run by Morning Consult economist John Leer found a high correlation of 0.68 between the Trump-Biden gap among the country’s oldest voters and the number of daily COVID-induced deaths in the United States. 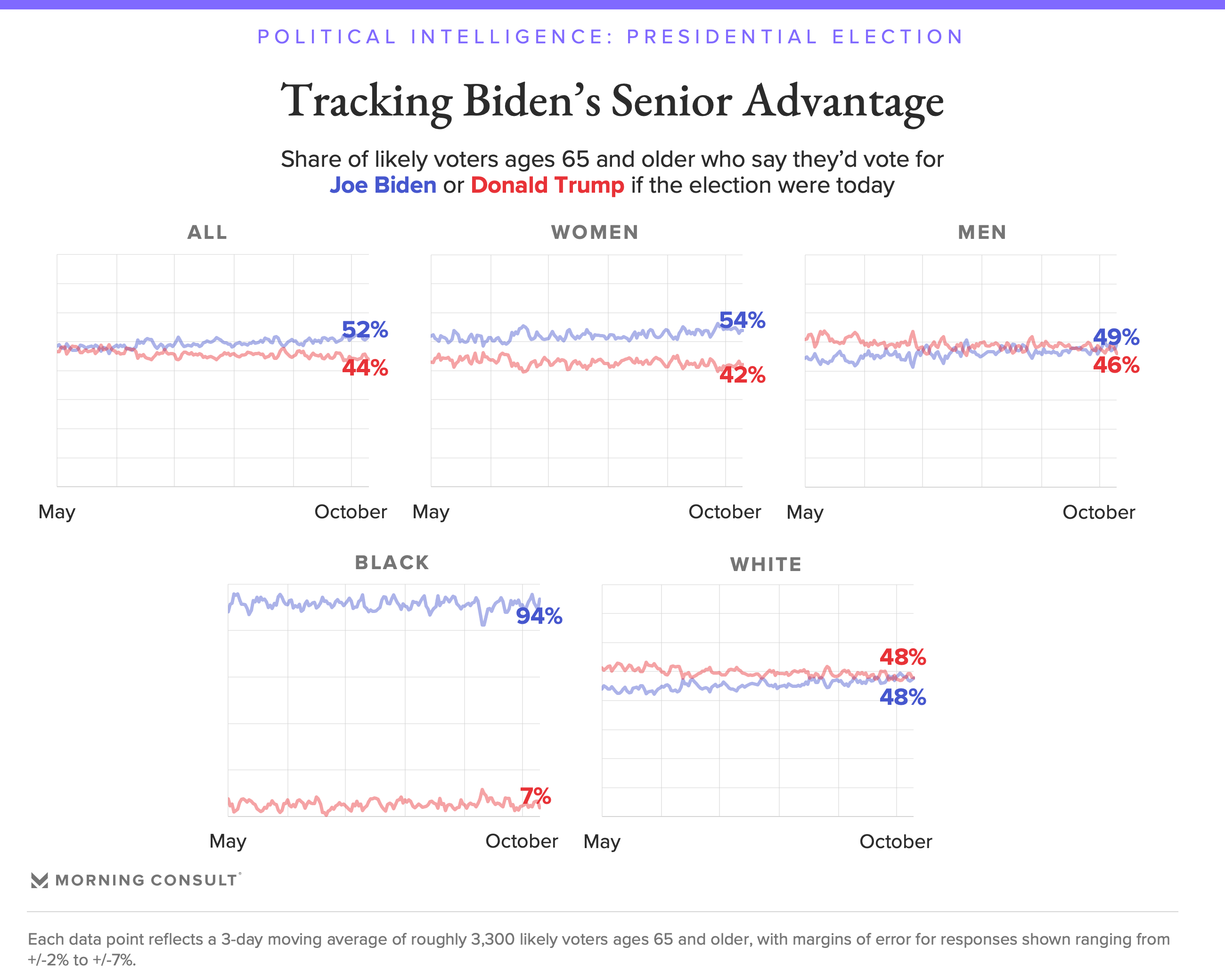 In all but one of 163 three-day samples of likely voters gathered since April 30, Biden has tied Trump, landed within the polls’ margin of error, or led the president among seniors. Throughout the summer, the numbers with that group have trended the Democrat’s way, driven by Biden’s improvements among older women and Trump’s lost ground among white seniors.

Biden leads Trump by 12 points among women over 64, compared to a narrower 3-point lead among men in that age group. Biden has support from 94 percent of Black seniors, and while Trump led his challenger by 5 points among the oldest white voters in early May, the two are now tied with the group.

In addition to his recent messaging on COVID-19, Trump has sought to make up ground with older voters by talking about reducing drug prices and accusing Biden of endangering programs such as Medicare and Social Security. Those entitlements are top of mind for senior voters, and Biden has pushed back on that messaging, noting that Trump’s proposed payroll tax cut could imperil the beloved social safety net. 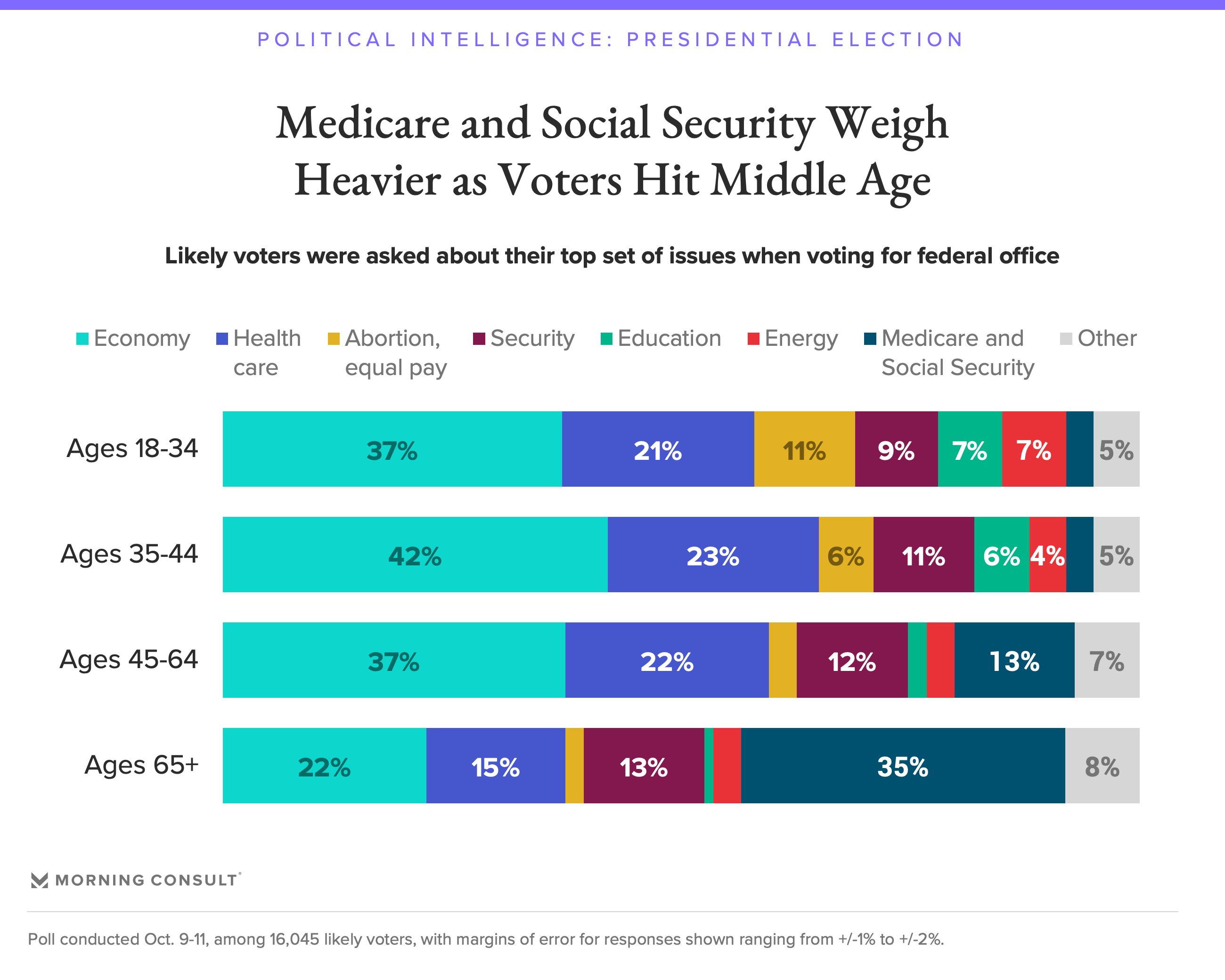 Over a third of voters older than 64 (35 percent) say concerns impacting seniors are their top set of issues when voting for federal office, unlike the overall electorate and voters in other age groups, who overwhelmingly prioritize the economy and then health care.

The issues of Medicare and Social Security start to crop into voters’ minds before they reach retirement age, with 13 percent of those ages 45-64 also prioritizing them, though that group is more likely to  prioritize the economy.