In Morning Consult’s Index of Consumer Sentiment, the difference between Obama-Trump voters in key swing states and voters overall has narrowed substantially

Before the coronavirus pandemic rocked the United States, President Donald Trump held a significant advantage in his re-election campaign: The voters he flipped from the Democratic camp four years ago felt overwhelmingly positive about the economy.

But as the pandemic drags on, the president’s edge on that front has changed dramatically.

According to Morning Consult Economic Intelligence, consumer confidence levels among voters who went for President Barack Obama in 2012 and Trump in 2016 have plummeted from the beginning of the year to mid-October, reversing three years of goodwill the president built with the voting bloc as his oft-touted economy came crashing down amid the pandemic.

Related: Analysis: How COVID-19 Has Changed Consumer Confidence in All 50 States

Most drastically, consumer confidence tumbled among those critical Obama-Trump voters in some of the most important swing states for the 2020 presidential race. This kind of economic movement is rare among these voters — even during the height of the trade conflict with China, consumer confidence among swing voters didn’t take much of a hit.

“With the exception of August 2019 when the bond market flashed signs of a recession, consumers’ views of the economy held up in 2019 during the trade war with China and gradually improved over the course of the year,” said Morning Consult economist John Leer. “These voters were willing to accept self-inflicted suffering in the name of trade agreements more favorable to the U.S., but the pandemic pushed them over the edge.”

Though Morning Consult data shows that the majority of Obama-Trump voters plan to stick with the president over Democratic nominee Joe Biden this election, flagging levels of confidence could have notable impacts beyond Nov. 3 no matter who comes out on top, experts say. 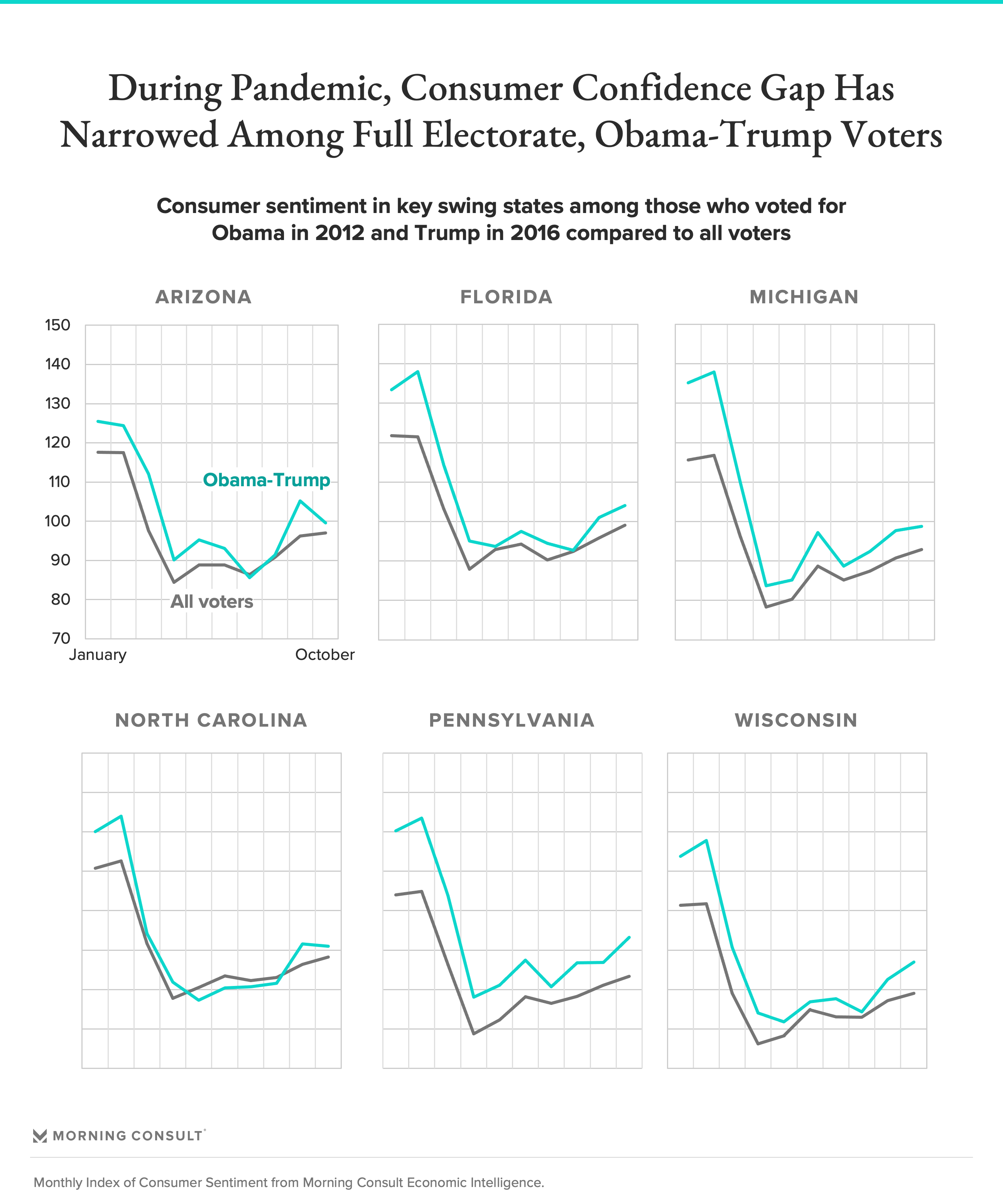 Arizona also saw a dramatic drop of consumer confidence among Obama-Trump voters, with sentiment for the year reaching 124.4 in February, and dropping to a low of 85.6 in July. The difference between Obama-Trump voters and registered voters in the state peaked in March at 14.5 points, and has dropped to 2.6 points in October.

Related: Voter Blame for Collapse of Stimulus Talks Shouldered by Both Trump and Democrats

How voters, especially these Obama-Trump voters, feel about the economy is important leading up to the election, said Mark Zandi, chief economist at Moody’s Analytics Inc. (Morning Consult and Moody’s, including Zandi, have collaborated on an unrelated series of research examining the pandemic and the economy.)

“If people are nervous and worried about their finances, that can’t be good for the incumbent,” he said. “These swing voters, they’re not happy with the way things are going, and they could very well decide in the next few months to switch back to voting for a Democrat this go-around.”

The shift in consumer confidence is also important to how political scientists and economists look at this group of voters going forward. James Konow, a professor of economics at Loyola Marymount University who has written about the economy and swing voters, noted that a good deal of these Obama-Trump voters in swing states are non-college-educated white voters, and that they, more so than other groups, tend to be concerned with economic issues rather than social ones.

“When you look at many swing states, the voters who tipped the balance in 2016 were mostly working-class whites, who used to be Democrats but who they lost,” he said. “In the last few months, a lot of those people have seen their lives hollowed out in many ways, so even if they stick with Trump in November, they’re still economically dissatisfied, and that’s going to show up later.”

To be sure, there are voters who, despite feeling more negative about the economy than they did at the beginning of the year, won’t attribute that decline to Trump and will vote for him either way.

“Broadly speaking, the Obama-Trump voters were Democratic union members, manufacturing workers, etc., who felt like the Democratic party wasn’t listening to them, and they got creamed by the economy in the last two to three decades,” Zandi said. “Some of those voters are rock solid in their views, and they aren’t coming back to the Democratic party, but there is a group on the margin that could swing this election and in future ones.”

The link between the economy and a given candidate’s chances of winning an election based on the issue isn’t proven: There’s too small of a sample size to know anything for certain. Although there’s plenty of research suggesting that the economy does matter a good deal during elections, it’s unclear to what extent it matters compared to other factors and how much weight political forecasters should put on it. According to Morning Consult Political Intelligence data, for example, roughly 80 percent of Obama-Trump voters in early October said they would vote for Trump if the election were held today.

And while the economy is typically an important issue for voters, the public health aspect of the handling of the coronavirus pandemic might be what ultimately ends up swaying voters once they get to the ballot box.

“Typically, an incumbent president would want consumer confidence to be as high as possible leading up to the election,” said Kyle Kondik, managing editor of Sabato’s Crystal Ball at the University of Virginia Center for Politics. “And while you’d think part of Biden’s path to victory would be winning back some of those swing voters, this is a referendum kind of election on Trump and coronavirus, more than anything.”