Biden Said He Would Transition From the Oil Industry. Nearly 3 in 5 Voters Support That Move

Democrats and independents that the ex-vice president is courting overwhelmingly back a phaseout, while 41% of Republicans support it

After former Vice President Joe Biden said he would phase out the U.S. oil industry over time in order to make space for the transition to renewable energy in one of the more memorable moments of the Thursday debate, President Donald Trump treated his comments as a gaffe, goading his Democratic challenger about the oil-producing states that he could be alienating.

But according to a new Morning Consult/Politico poll, 57 percent of the country’s voters back a concerted oil-to-renewables transition, while 28 percent oppose it.

In the debate’s aftermath, the Biden campaign clarified the candidate’s comments by saying the Delaware Democrat meant only that he would phase out tax subsidies for the oil industry.

But a full phaseout is popular with voters. Net support — the share who support minus the share opposed — for transitioning away from the oil industry is 60 points among Democrats (73 percent support and 13 percent opposed) and 24 among independent voters (52 support and 28 opposed), according to an Oct. 23 poll of 1,848 registered voters.

And net support from Republicans is underwater by just 5 points (41 percent support and 46 percent opposed), perhaps indicating that the issue is not nearly as partisan as the two men on the debate stage seemed to posit. 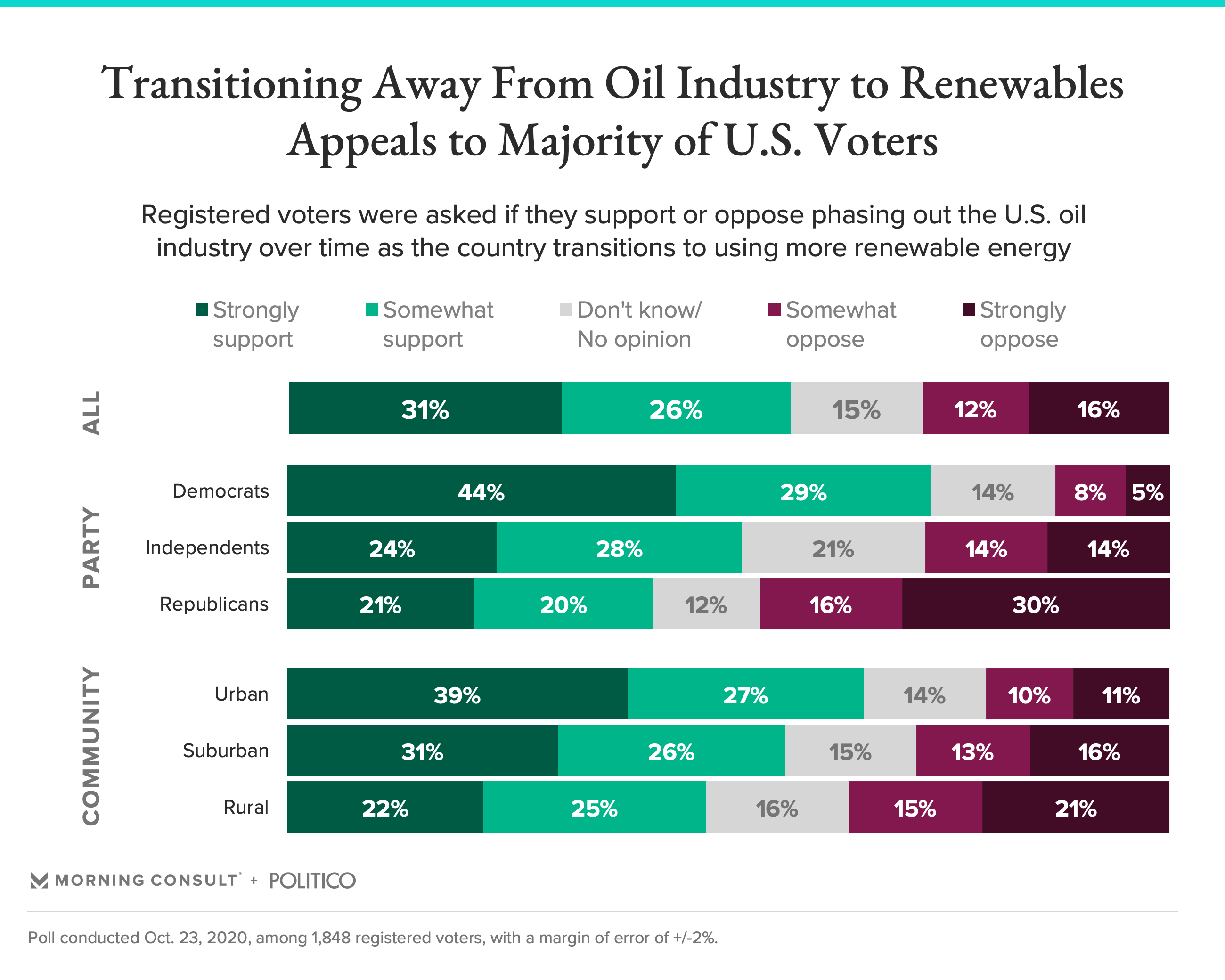 While urban voters — who presumably have fewer economic ties to the oil industry than their rural counterparts — support a phaseout at a higher rate (66 percent) than others, both suburban (57 percent) and rural voters (a 47 percent plurality) are more likely to support than oppose it. Suburban and rural voters, especially in swing states, helped clinch Trump’s victory in 2016.

Meanwhile, the debate was the first time a moderator asked presidential candidates explicitly about their plans for combating climate change rather than just asking if they believe the phenomenon exists or about its causes.

Biden’s elaboration on his plans for the renewable energy industry and climate action seems to have impressed the 1,163 debate watchers polled. They trust Biden over Trump to handle climate change by a margin of roughly 2 to 1, 59 percent to 29 percent. Biden garnered the trust of roughly 18 percent of Republicans, as well.

Fewer than 1 in 5 debate watchers thought the few minutes devoted to climate change conversation was too much; in fact, 39 percent thought it was not enough and 37 percent said it was the right amount.

The overall poll has a margin of error of 2 percentage points, while the responses to the two climate-related questions posed just to debate watchers have a margin of 3 points.