48% of voters back confirmation of Amy Coney Barrett, more than the 44% who backed Neil Gorsuch or the 37% who backed Brett Kavanaugh

Judge Amy Coney Barrett poses for a photo op during an Oct. 21 meeting with Sen. Marco Rubio (R-Fla.) on Capitol Hill. As the Senate prepares to vote Monday to confirm her to the Supreme Court, new polling shows backing for her ascension to the high court is the highest of any of President Donald Trump's nominees. (Jonathan Newton-Pool/Getty Images)
By Eli Yokley

Senate Republicans voted Monday to confirm Judge Amy Coney Barrett to the Supreme Court, a move backed by a lion’s share of the American electorate.

According to a new Morning Consult/Politico poll, conducted Oct. 23-25 among 1,990 registered voters, 48 percent said the Senate should vote to confirm Barrett, down from a 51 percent high in a survey conducted after her confirmation hearings. About a third of voters (32 percent) said the Senate should vote down her nomination, up 4 percentage points from the previous week. The poll has a margin of error of 2 points. 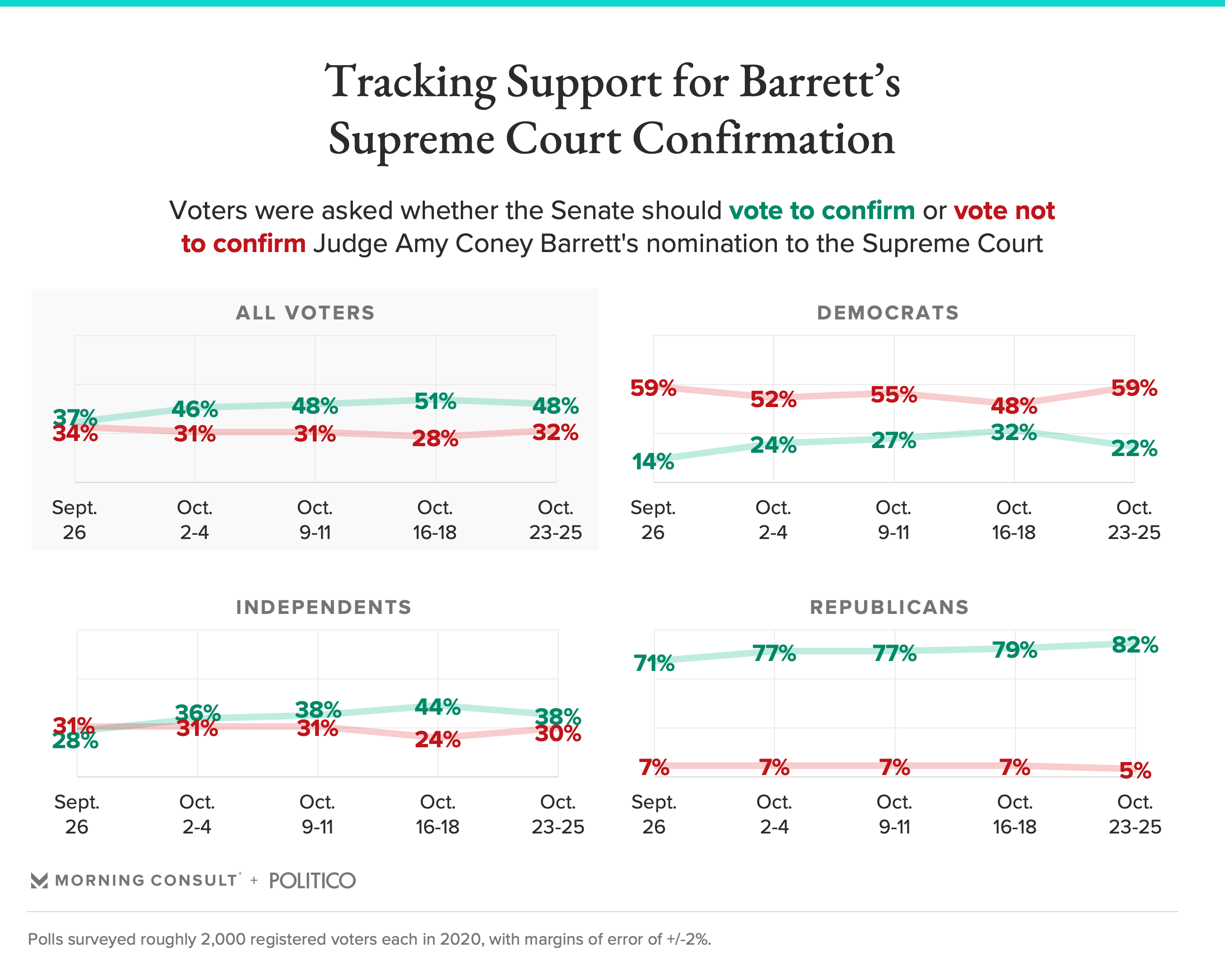 Among independent voters, support for Barrett’s confirmation reverted back to its state prior to the Senate Judiciary Committee’s hearings, while opposition among Democratic voters increased 11 points from the previous week to 59 percent.

Fifty-two senators, all Republicans, voted to confirm Barrett, with just Sen. Susan Collins of Maine breaking with her GOP colleagues and voting with all Democrats against the nomination — the first time in modern history that a Supreme Court nominee was confirmed without any support from the chamber’s minority. Two years ago, Sen. Joe Manchin of West Virginia was the only Democrat to support Kavanaugh, while in early 2017, Gorsuch drew support from Manchin and two other Democrats, Heidi Heitkamp of North Dakota and Joe Donnelly of Indiana, who each would go on to lose re-election. 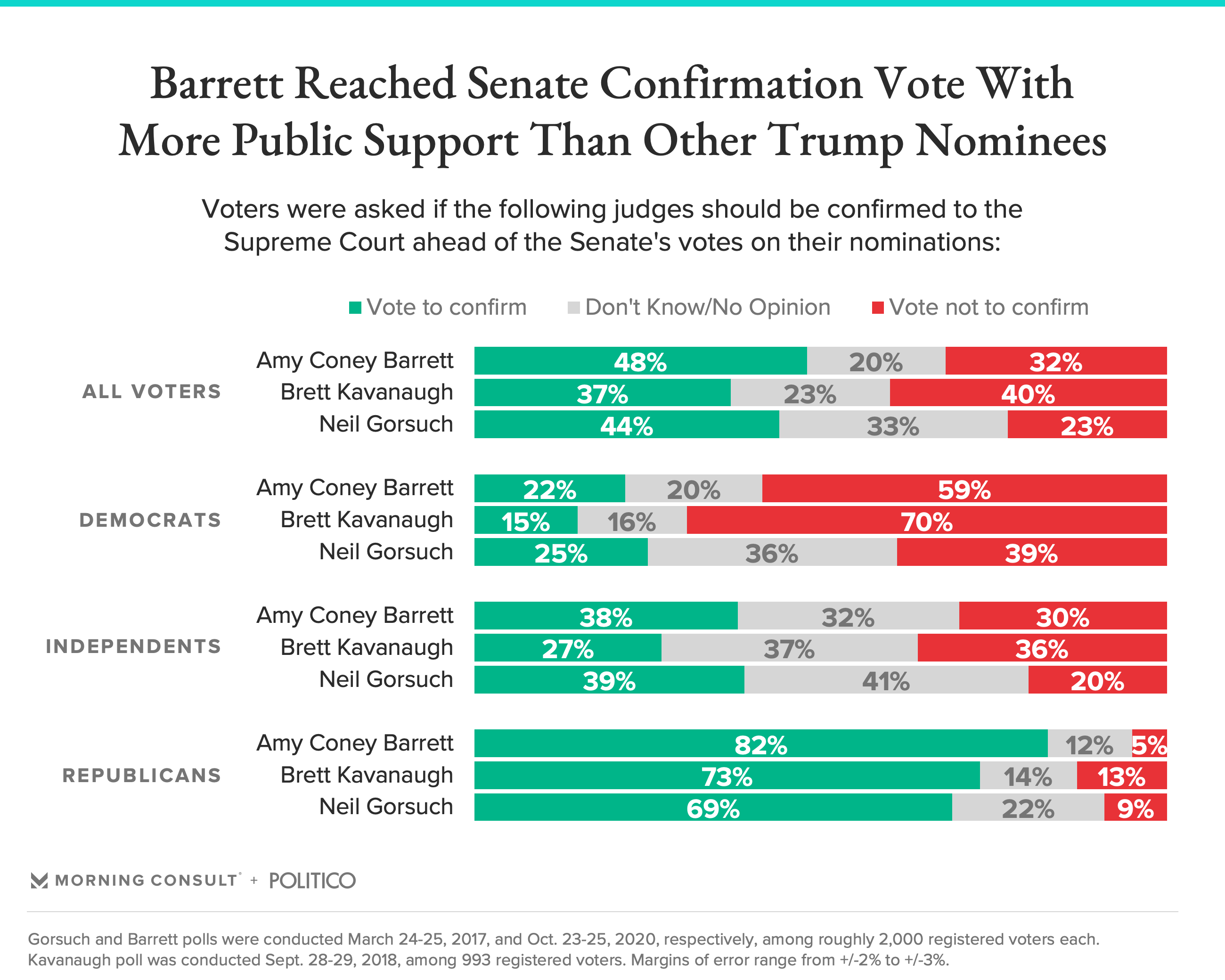 Republicans are solidly on board with Barrett’s placement on the court: 82 percent of GOP voters support the nominee, marking a higher level of backing from the president’s party than for either Gorsuch or Kavanaugh.

Barrett has become more popular over the past month as more voters developed views about her: 36 percent have favorable opinions of the judge, up 11 points since a Sept. 26 survey, while 32 percent have unfavorable views, up 8 points during the same period. Another 32 percent of voters do not have opinions of her (including 14 percent who say they’ve never heard of her), a decrease of 19 points since Sept. 26.

The latest survey found the voting public evenly divided, at 30 percent, over whether Barrett’s move to the Supreme Court will shift it in the right or wrong direction. Another 20 percent said the court will remain the same.

This story was updated to include news of Barrett’s confirmation.